Sara Barker: a weak spot in the Earth @ The Approach To 25 June:  http://theapproach.co.uk 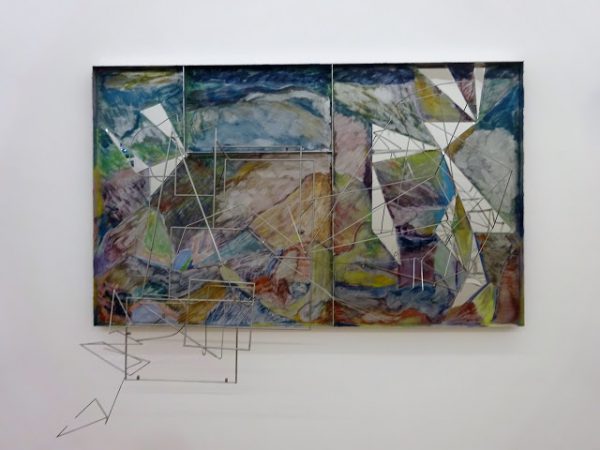 Glasgow based Sarah Barker has typically played literary inspirations – Virginia Woolf and Gertrude Stein come to mind – into her fusions of painting and sculpture. They characteristically start with paintings which she – usually, but not always – cuts into narrow strips which are combined with metal rods to make three-dimensional structures. Now Barker writes a poem of her own which operates like a chain of haiku to provide seemingly imagistic yet elusive titles for six of these conjunctions of border lines, viewing templates and landscape settings which suggest nature framed and excerpted. The key dynamic is between the preciousness with which her process flirts and the formal invention which negates the risk. 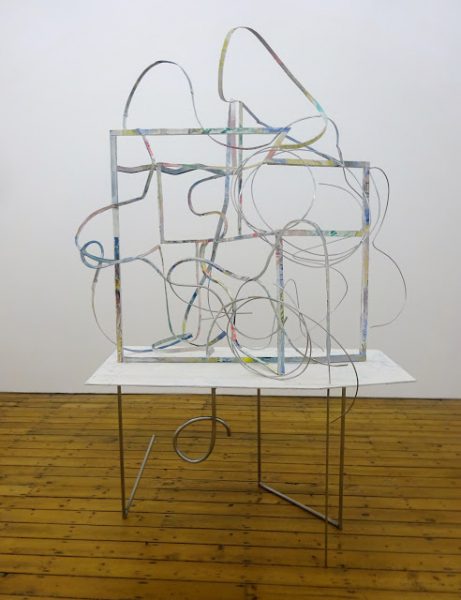 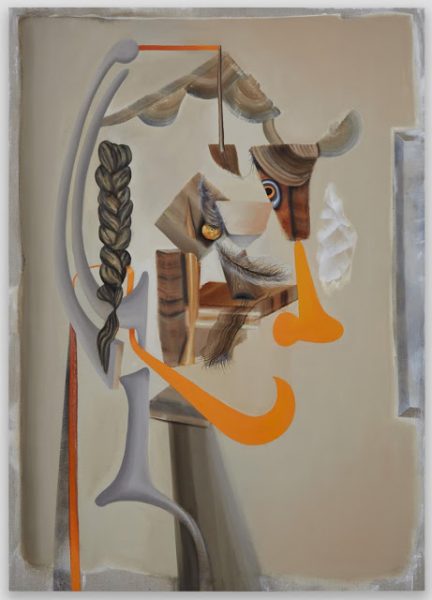 LET IT BE MADE, 2017, Oil and natural gesso with geological mica on linen over aluminium panel. 119 x 85cm
Vicky Wright’s work has always been socially engaged, one sign of which has previously been her preference for painting on the reverse of panels as the site of the back story’s alterity. Here she paints on canvas with a directness suiting her subject: portraits inspired by her grandmother, a seamstress who worked in the mill by day and – inspired by the world of high couture – on dressmaking by night, Wright sees that compacting of her grandmother’s time as precluding today’s more technological colonisation of the body. She calls their style ‘calcified pop’, though there’s also plenty of Cubist collage in the juicy mix. 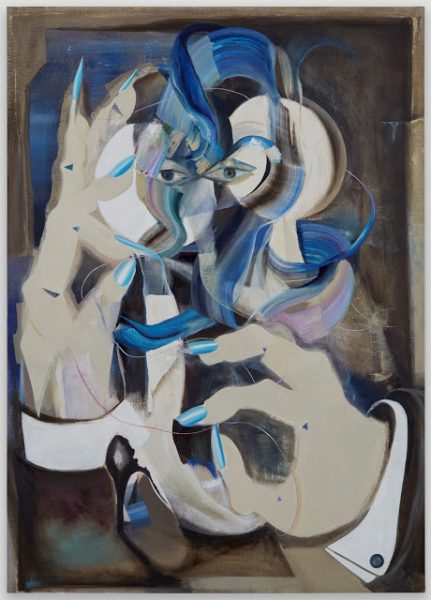 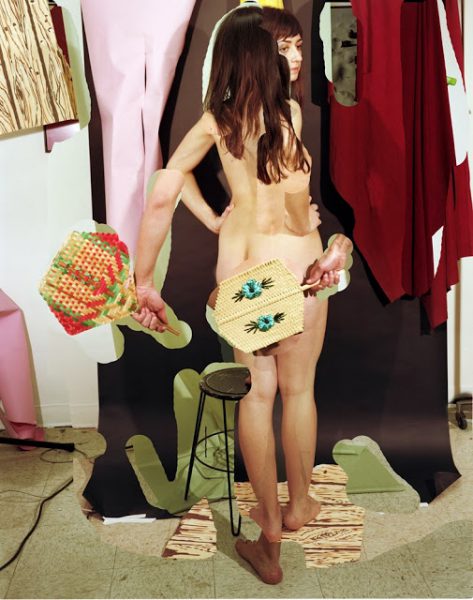 Paul Luckraft curates an impressive double bill at the Zabludowicz Collection. In the main space, fourteen artists use the indexical image as a mere starting point for their representation of the world, be that through appropriation, staging or manipulation. Lucas Blalock, for example, might be seen as a Brechtian user of Photoshop, making it a visible part of how he ‘depicts’ an oddball choice of subjects. In the project room, Bea Bonafini is the latest young artist to feature in the Collection’s ‘Invites’ series. Riffing on the building’s transition from religious to museological authority, she triple-tweaks hierarchical power bases with a tapestry-come-carpet derived from battle scenes, a painting of an imagined chapel for non-believers, and a throne too spindly to support power viability. 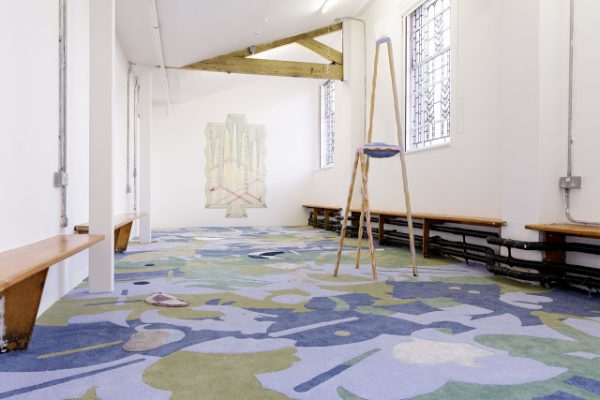 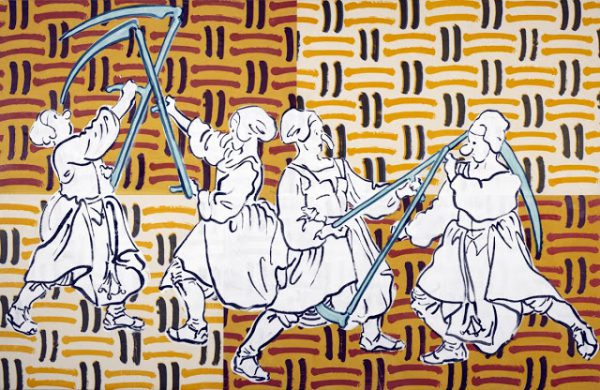 Sigrid Holmwood: Peasants fighting with scythes, 2017 – Mayan blue made from woad, ink, and gesso, on calico mordant printed and dyed with dyer’s broom, buckthorn berries, and logwood, on board, 120 x 185 cm
Sigrid Holmwood’s historical-conceptual paintings adopt the peasant as both subject and carrier of attitudes which run counter to the modernist mainstream. Part of that rebellion is against industrialised production, and so Holmwood displays the making of cochineal (from insect-infected catci) and Mayan blue (from the European indigo-producing plant, woad, so adding a colonialist reversal into the mix). The making of the paintings largely creates their subjects, which loop round on themselves with cheerful energy, as in this dance-come-fight with scythes. Add that, upstairs, there’s a reliably stimulating pick ‘n’ mix from across the career of Prunella Clough upstairs, and that Ronchini and Vigo have good shows just now, and Dering Street is well worth a visit… 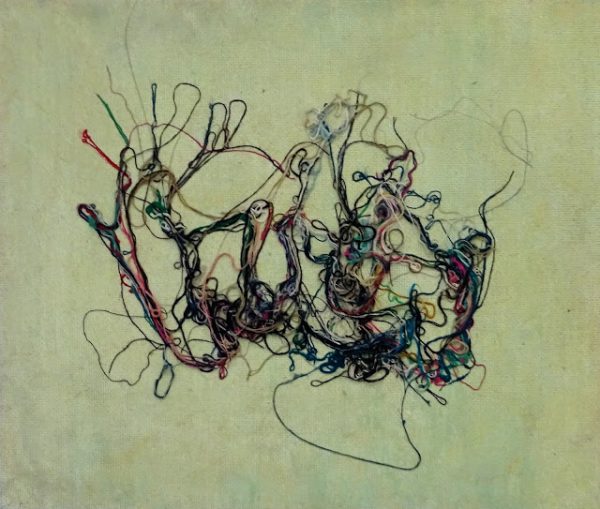 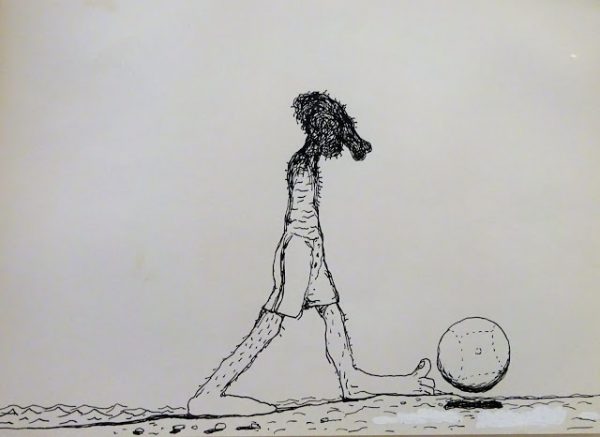 Late Guston – the work produced 1970-80 following his controversial shift away from abstraction, can seem the go-to influence for every young painter. It’s remarkable, then, to find a 250-strong body of work from that period which has hardly been seen. What’s more Guston’s savage critique of Nixon-the-dickhead’s various shenanigans couldn’t be more timely in the all-too-comparable context of the 45th President The bulk of these drawings, styled as cartoon-strip but also feeding the paintings, are from a three month blitz in1971, with a separate 1975 group lampooning Nixon’s self-pity while suffering from phlebitis during his political and physical descent, having resigned in 1974. 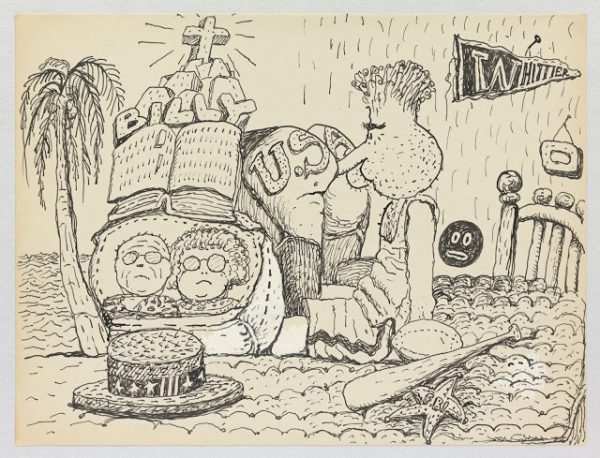 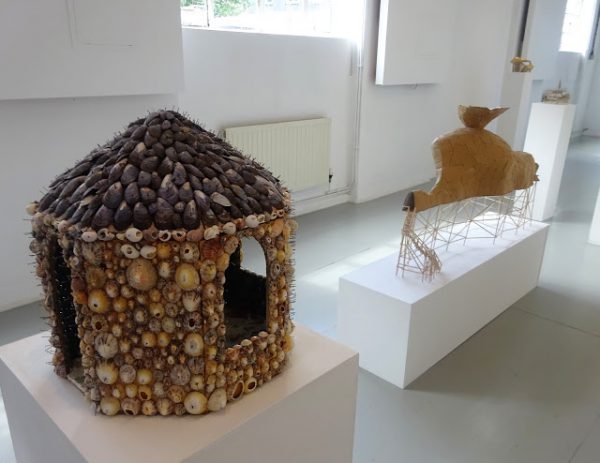 Installation view with Bridgette Ashton: A Summerhouse for George Howard, 2006 and Model for Banqueting Hall Cavern, 2014
Artist-run Space Station 65 has reopened with a teeming evocation of staged landscapes through such past eccentricities as grottoes, follies and pleasure gardens of which – in Diderot’s phrase – ‘only the world remains’. Bridgette Ashton fills most of the space with what look like architectural models for future projects, but imagine how what has now disappeared might once have been planned, for example, a summer house encrusted with seashells, and a concert hall built into a cave. Nicole Mollett amplifies the mood through painted and magic lantern slides and projections depicting imaginary creatures and features and evocative words – which chime with a further contribution from Ashton: posters announcing imaginary past events. The regaining of lost innocence rubs up against the inevitability of our demise. 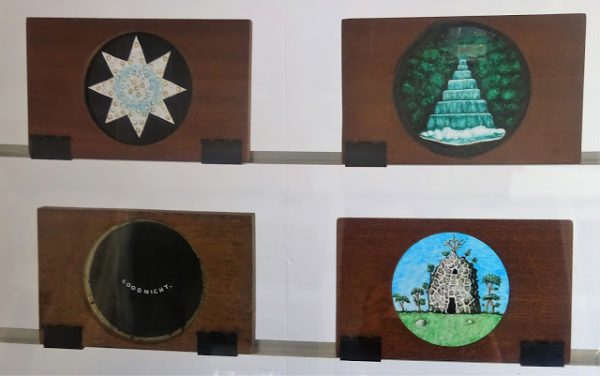 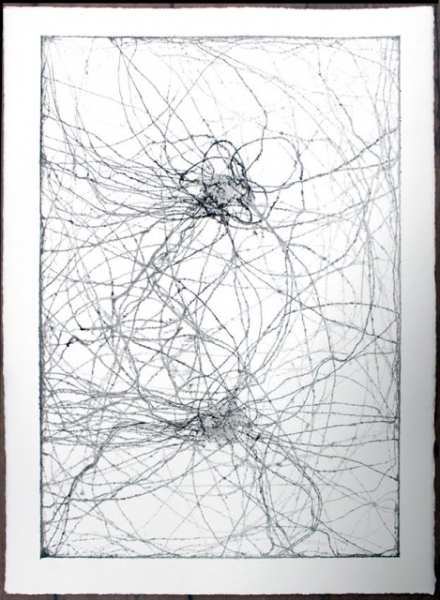 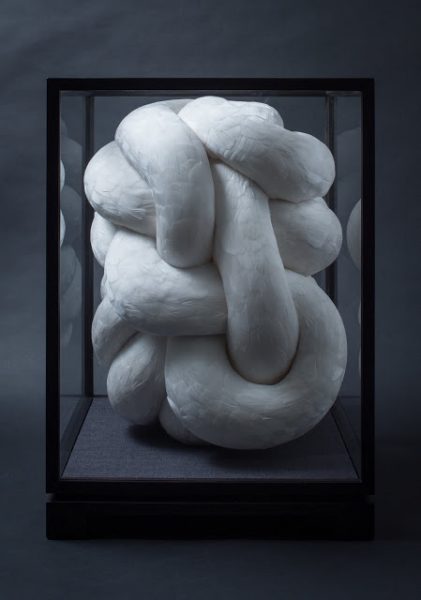 Kate MccGwire: Sentient, 2016 – Mixed media with goose feathers in bespoke cabinet
The High Low Show is a site-responsive adventure in contrasts and connections. Each of seven artists has work upstairs and downstairs in Laure Genillard’s distinctively divided space. Each artist’s work operates between registers of high and low, including altitude, viewpoint, mood, value and cultural register. Bronwen Buckeridge, Susan Collis, Sara Haq, Tom Lovelace, Kate MccGwire, Sarah Roberts and Julie Verhoeven  all rise impressively to my simple curatorial brief with nary an unintended pratfall. Kate, for example, shows feather sculptures above and drawings made by maggots below – not without duality, as there is a sinister edge to the convolutions of Sentient…

Searching for magic and the distorted image falling from your iCloud @ The Dot Project, 94 Fulham Rd – South Kensington
To 9 July: http://thedotproject.com 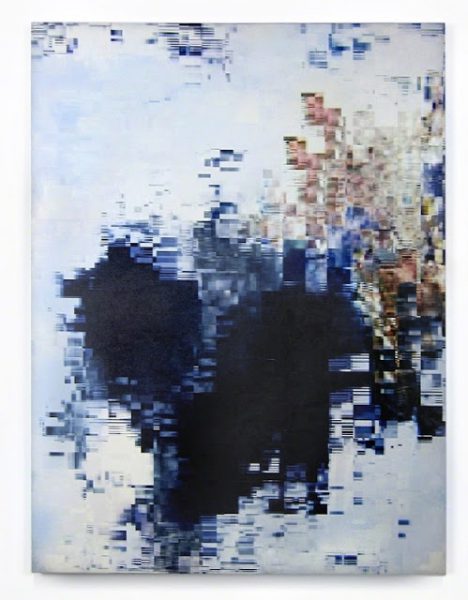 Oil and acrylic paint, UV ink, spray paint and varnish on canvas 200 × 150 cm
There have been quite a few shows exploring the interface between painting and the online world painting, but this one is better than most. That’s because most of the 13 artists’ works meet the simple-sounding but eminently missable criteria of working as paintings, having some digital content, and relating the two in an illuminating way – and with he processes explained to the viewer. For example, in a contrast grounded in similarity. Konrad Wyrebek shows a ‘Data Error’ paintings, this one from an image of someone jumping into water, which Wyrebek corrupts until it reaches a point he wishes to paint from; and Siebren Versteeg creates algorithmic programs that respond to and distort online imagery, then presents the (unpainted) results as painterly abstractions. Derek Mainella, Gordon Cheung, Kristian Touborg and Ry David Bradley are also excellent… 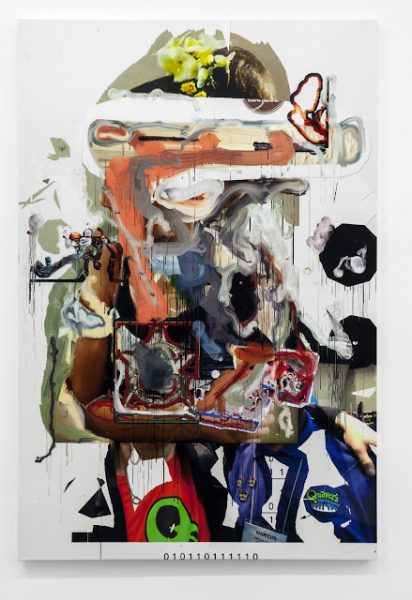 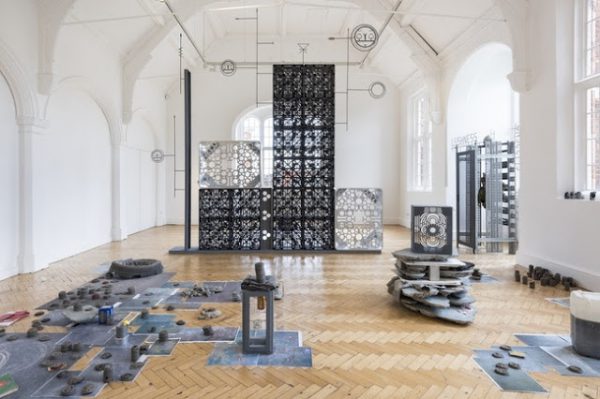 Whereas the chaos of Francis Bacon’s studio was reconstructed in identical disorder in Dublin, Paul Johnson has made what looks at first like chaos by shifting what may well have been his fairly tidy studio into Camden Arts Centre.  On closer examination, aided by Johnson’s own 40-feature map of the room, it turns out that all is very fully considered: he has variously cut, cast, re-oriented, combined and layered items, using the contents of his studio as raw materials for discovery as – or transformation into – art. Walls become a table, crates form a sculptural barrier, a door stands islanded… As he oversees the scene in the form of a ‘Stack-Man’ made from piled newspapers, Johnson must be pleased with how this rejig has turned out – the more so as he’s paired with veteran Romanian avant-gardist Geta Brătescu making the most of her studio in the other galleries.
___________________ 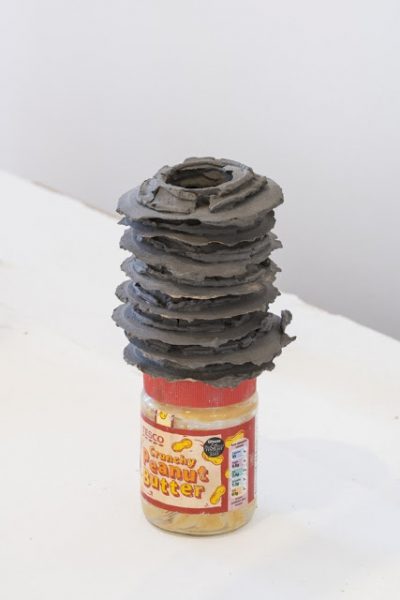