Paul Carey- Kent chooses his pick for December 2016 through the new year. 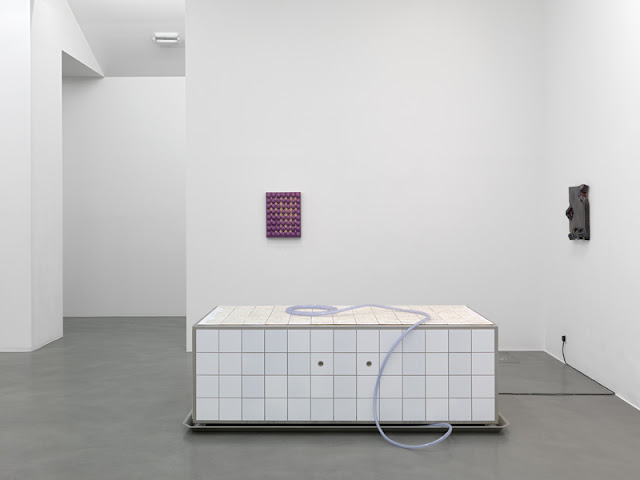 Genevan artist Mai-Thu Perret has made her name since 1999 through by mapping an imagined women-only would-be-utopian desert community through the writings and artworks attributed to them. Typically they tweak traditional crafts – ceramic, tapestry, wickerwork – towards a constructivist aesthetic which carries an incipient feminism. Zone sees things get darker: it cites a novel about a tribe of lesbian warriors; a faceless armed figure stands guard; inside is a ceramic fountain in the form of a mortuary slab, its tube more suggestive of ritual or abuse than of pleasure. But the total effect is ambiguous: the water babbles pleasantly and the wall-based works package their art historical references attractively, though not quite as perfectly as their systems seem at first to imply… 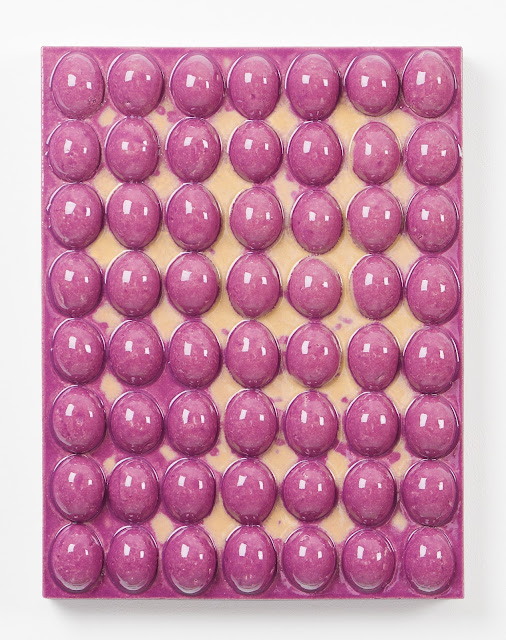 Be fearful and alert, as if peering into an abyss, as if treading onto thin ice, 2016 – glazed ceramic 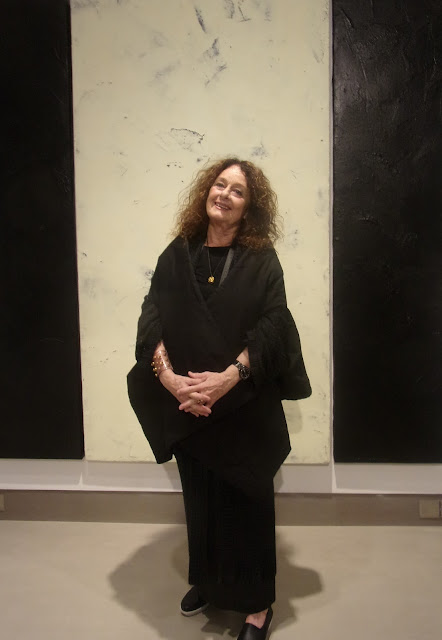 Ingeborg Lüscher at the opening

If you feel the need of some intensely spiritual abstraction, your main choices are Rothko and Newman in the RA’s Ab Ex show, or this first London solo for the German widower of Harald Szeeman, who got to know Ingeborg Lüscher through selecting her work for Documenta V in 1972. These works from 1987-91 make elemental use of sulphur dust (glowing more creamily then you might expect from admixture with acrylic) and ash. That gives her paintings body, and an offsetting darkness. The fire of inspiration and the remnants of its burning out might come to mind, but Lüscher seems sparky enough at 80. 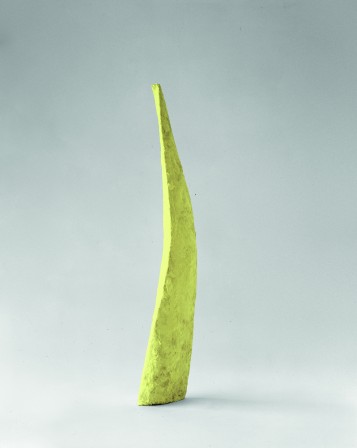 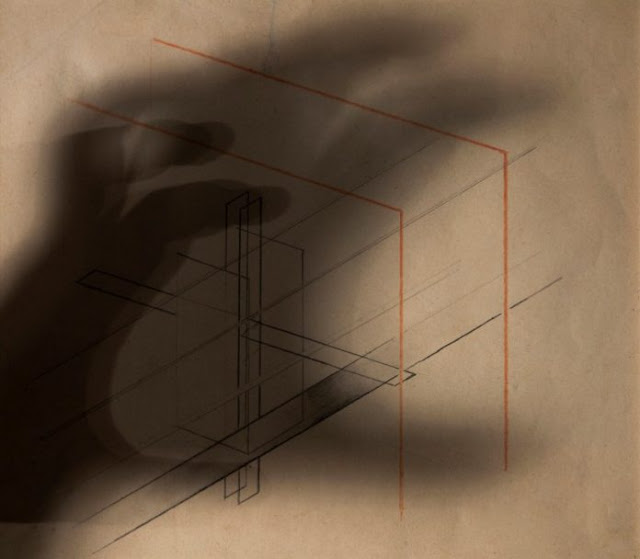 This striking two room installation by the Amsterdam-based Greek artist Antotis Pittas uses a sonorous Malevich red to set up a quadrilogue between the classic constructivism of the utopian Soviet period, current European politics, the artist’s hand, and the space. So, for example, a Judd-like form is made from sub-standard bronze obtained from Greek piping sold somewhat desperately as scrap; the artist’s hands imitate the gestures from speeches by various European leaders in front of the same drawing by Lyubov Popova. And a hand-made hand-come-sofa – has it fallen from a colossal Oldenburg statue of Lenin? – provides a potentially comfortable seat from which to view a wall drawing which quotes a refugee expelled from the Calais camp. The past is our grab-bag, it seems, but still we fail to learn from it… 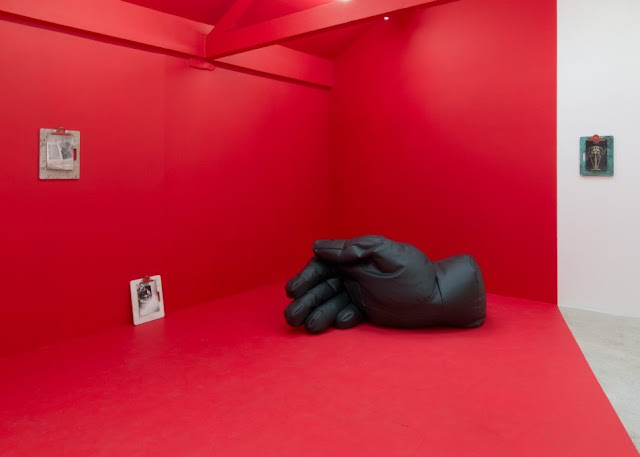 Factory, 2016
Paul Housley pulls a selection from his crowded studio walls to reflect on his practice, forming an indirect self-portrait which loops back to its making. There’s a van Gogh-ish  chair, an empty frame, England burning, a tiny version of the artist as one-eyed adolescent pirate (aren’t they all, to some extent?), and a paint factory, referring to both Housley’s time in Sheffield and the possibility that the building is now an artist’s studio,  and insinuating a joke – are all painted factories ‘paint factories’? Add some characterful little sculptures such a head of the artist carved in wood, and the forward motion of the new gallery, while it’s hardly a palace yet, continues in this fourth show. 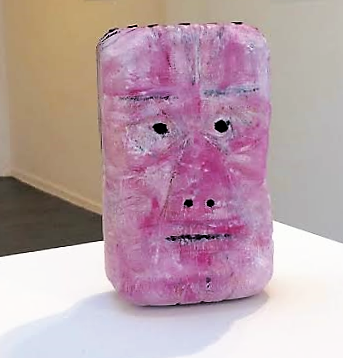 Feminist Avant-Garde of the 1970’s  from the Verbund Collection, Vienna @ The Photographer’s Gallery 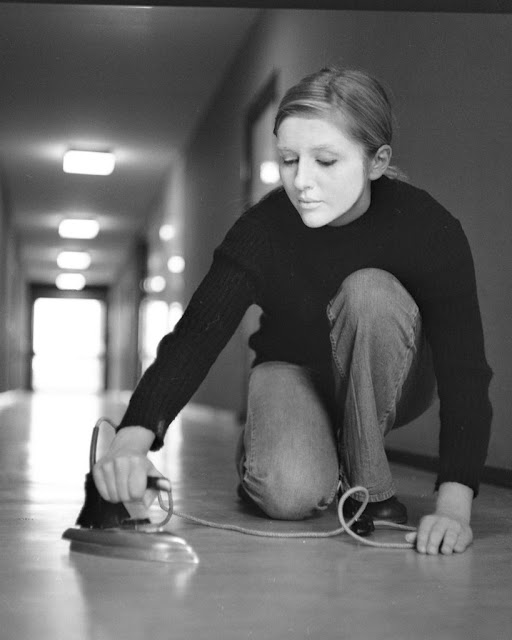 Renata Eisenegger: High-rise No. 1, 1974
This may sound a narrow show until you realise how many excellent artists can be described as avant-garde 1970s feminists: Chicago, EXPORT, Ivekovic, Mendieta, Orlan, Pane, Rosler, Shneeman, Sherman, Wilke and Woodman obviously enough, but they’re mostly represented by refreshingly less-often seen work: Mendiata counters her beauty and renders herself other simply by pressing up against the pane of glass, Ivekovic makes herself visibly silent by greeting her show’s visitors with a taped up mouth. Moreover, there are 200 works by 48 artists, well marshalled into four themes, and almost everything is of interest. For example, Lili Dujourie makes a naked man look like a woman simply by how she has him pose; Renata Eiseneger irons the floors of her apartment block; and Brigette Lang proposes a headress which prevents intimacy by means of sharp spikes…. In spite of all of which, this is far from comprehensive: Adrian Piper, Chantal Akerman, Dara Birnbaum, Mary Kelly, Niki de Saint Phalle and Natalia LL (who has a solo show at  Roman Road) would all enhance it. 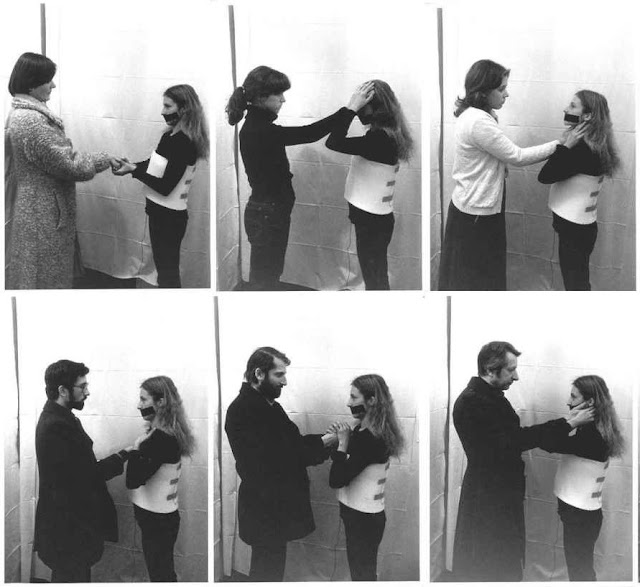 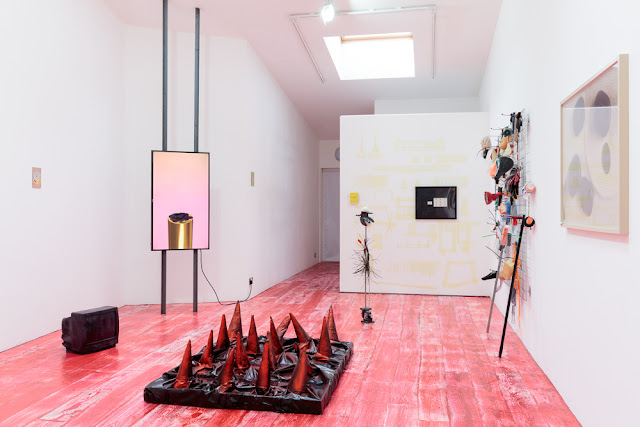 The annual Bloomberg New Contemporaries will run 23 Nov- 22 Jan at the ICA. Having seen it in Liverpool, I can attest that Kingsgate’s less trumpeted selection of a dozen recent graduates is of comparable quality, and attractively presented by curator-selector  Eleanor Davies under the umbrella of the artists as ‘solopreneurs’ managing their own brands.   Billy Crosby has stained the wooden floor in show-infesting carmine evoking, perhaps, the house linked to the work’s title, Wendy. Then you realise it’s actually a concrete floor, on which are Sarah Jenkins’ wax TV and Kitty Hall’s gloop-drenched cone sculpture Road Spike.  The retro street theme goes on with Wuji Yi  presenting a wittily unlikely taxonomy of the favourite security barriers of the population of Ghullja, China, while Daniela Dyson spunkily asserts her painterly credentials with the text work BIG DICK in letters, I would think, as high as she is.  Prospects for future brand recognition look fair. 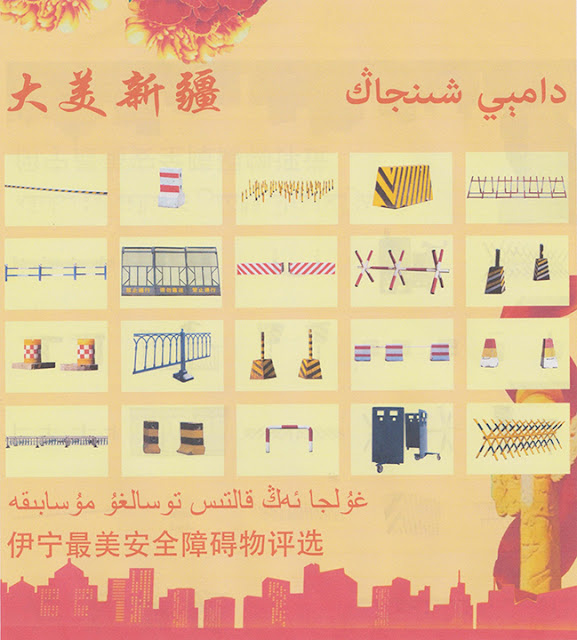 Wuji Yi: research documentation from ‘The Most Glorious Security Barrier in Ghuja’ project 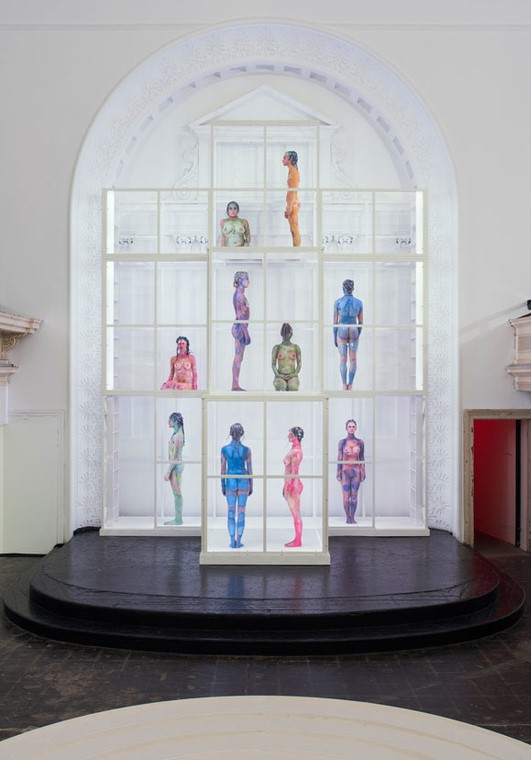 Where is action painting now? Here’s where… as enacted in slow motion by ten performers during Frieze week (and two thereafter except for a full ten again on 17 December) on three storey glass structure which responds to the religious height of the main hall, and among Huanca’s previous works in another room. The upcoming American (or, now, those trained by her) paints her models every day, and their semi-choreographed movements paint the space in turn over the show’s long duration. Viewers and models between them trigger an atmospheric soundscape. 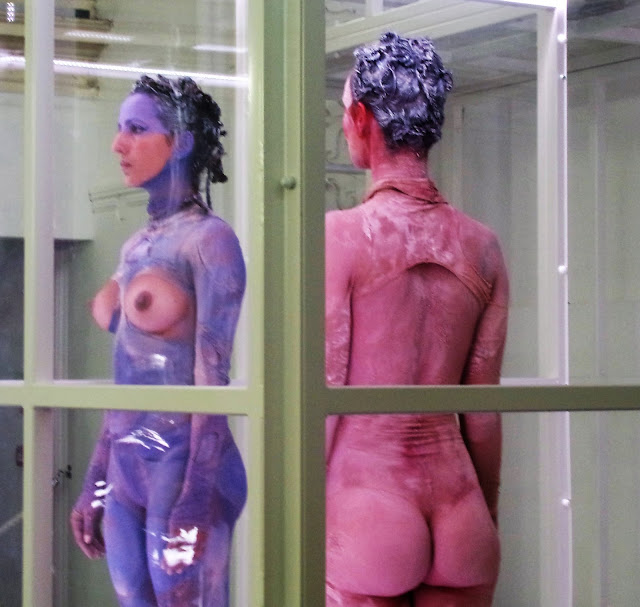 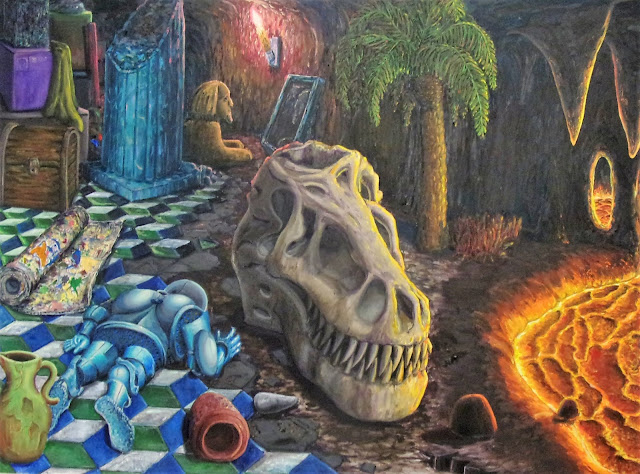 There’s another good reason to visit the Zabludowicz Collection this coming month: Dutch painter Willem Weismann occupies the project space with a cycle of three large paintings which take us from outside to inside and (after a punctuating ladder painting) down into the basement, with all sorts of cunning connections between the works, such as the recurrence of stylised fire, the way a patch of the surface which acts as his palette recurs in different guises, and the TV image in the second work showing the image from the CCTV on the first. Plus a rather fetching line-up of cushions! 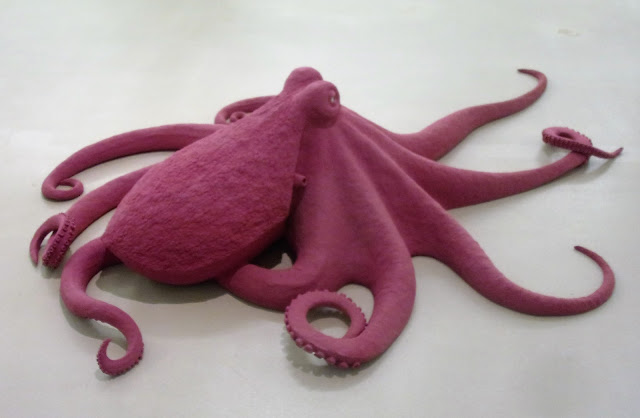 This is a remarkable enterprise from commercial gallery, an extensive survey through art and historic illustrations of our relationships with animals with full curatorial apparatus (from Jens Hoffman) and 70 participant ‘creatures’ unerringly chosen – if this were the Tate and you had to pay to get in, no one would complain. It’s a bit futile to select highlights, but hard not to notice John Baldassari’s giant white camel ready to pass through a needle,  Carsten Höller’s purple octopus, an enormous tiger portrait by Robert Longo, and Steve McQueen’s highly charged film of a dead horse. At the other end of the scale, it would be easy to miss Maurizio Cattelan’s mouse house or Jacub Julian Ziółkowski high-hung dog’s soul. 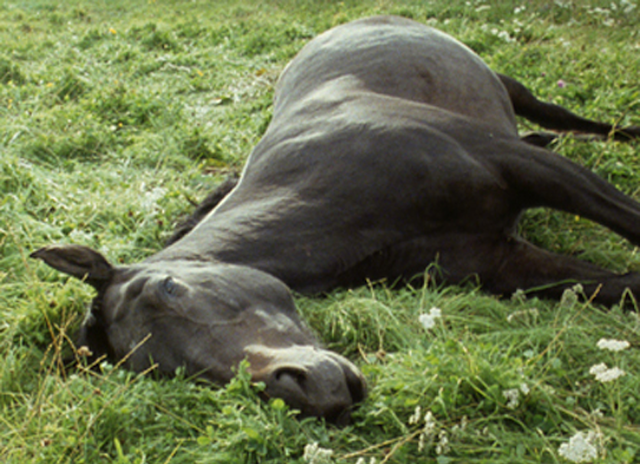 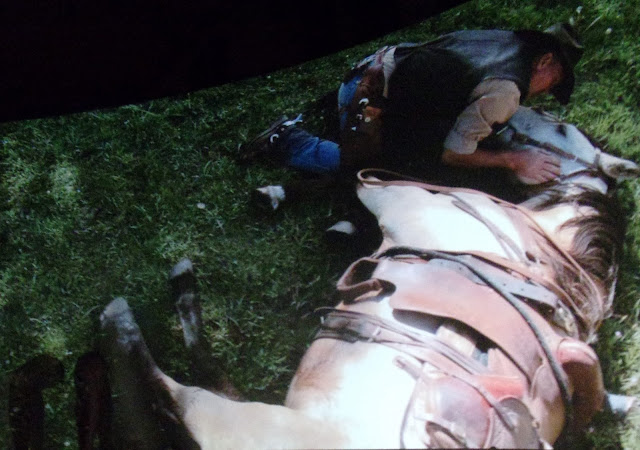 Robin Klassnik’s new – albeit temporary – space kicks off with an immersive video-performance-sculpture by Leah Capaldi. A 21 minute double projection film loop shows the ‘natural horsemanship’ of a Utah cowboy as he cajoles his steed into lying on the ground. Against all the instincts of a flight animal, the horse arrives at what its handler calls ‘a very tender energy moment’. The vast screen is silicone, giving it a horse flank’s ripple potential and allowing the legs and arm of a participant to push through holes cut in it, so complicating our understanding of what is image, what object, and what animal; and emphasising the human parallels to be drawn from the demonstration of how love can generate trust. 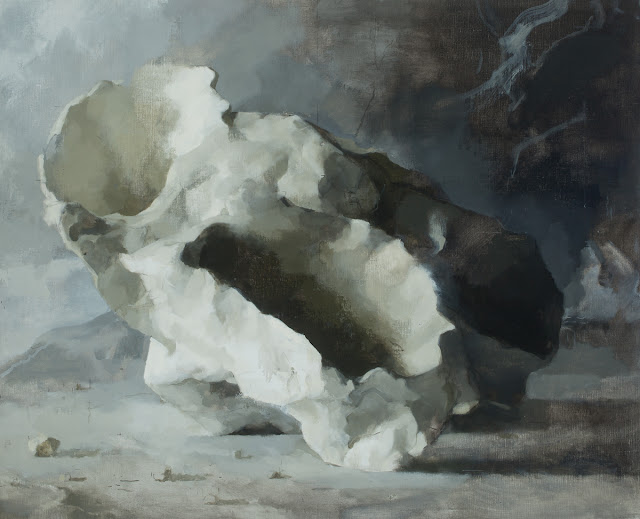 Brackish II, 2014 – 92 x 113cm
Painting is well suited to ambiguity: a photograph may be deceptive, but once you know what it is the matter is concluded. But there’s no fact of the matter in a painting, which Claudia Carr exploits to the full in her  pictures derived from small objects arranged in the studio, here restricted to calmly lyrical black, white and ochre: she exploits ambiguities of genre (still life, landscape or abstract?), place (are under water or on the moon?) scale (is that a pebble, rock or mountain?) and tone (naturalistic or surreal?). 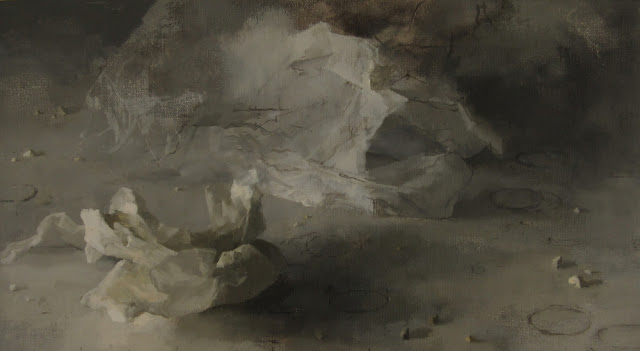 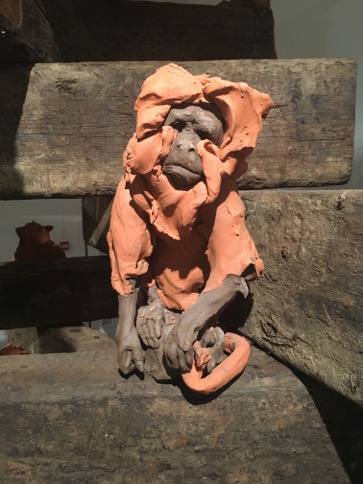 You’ll smile at the cavalcade of forty-odd monkeys which Isle of Manner Stephanie Quayle concocts from clay in the manner of a watercolourist who can capture character in a fluid sketch. Gallerist Hannah Watson can specify the six types for you. Yet the jenga on which they clamber is a rickety-looking construction of old railway sleepers, suggesting how the delicate balance of their habitats might come toppling down like a set of blocks in the game of removal and addition; and the backroom is populated by orang-utans, lounging on the crates in which they were presumably imprisoned to be brought here. All seven species are endangered, so maybe you shouldn’t smile – but it’s still hard not to. 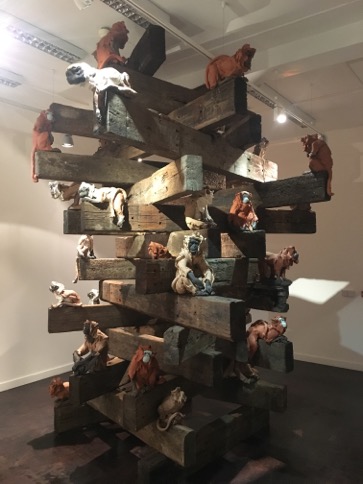