Maybe there’s no such thing as an unusual material these days. Consider the use of acted magazine texts by Gerard Byrne at Whitechapel, woollen thread by Fred Sandback at David Zwirner and the coal, coats and chairs of Jannis Kounellis at the Parasol Unit in three of the major shows of the moment. At any rate, there seems nothing odd in the following  artists using battery acid, velvet, concrete, sandstone, bricks, oiled clay, sand and conversation.  When Wil Murray uses paint, it never gets near canvas; when Fiona Rae does likewise, she adds pandas; when bronze gets a run, it’s mixed in with ceramics. We kick off with Glass, stainless steel, LED and a real time control system.

Mariko Mori: Rebirth @ Royal Academy of Arts – Central
To 17 Feb: www.royalacademy.org.uk
New York-based Japanese Buddhist artist Mariko Mori has emerged from her cyborg surrealist enactments of the 90s to to focus on the eternal ethereal. She provides plenty which an atheist Briton could mock… and yet the best of her techno-meditations on the circle of life, death and rebirth succeed against those odds. The star piece in the RA’s return to Burlington Gardens is ‘Tom Na H-iu II’ (2006), named for the portals through which souls pass on their way back to earth. An ur-smooth 15 foot monolith pulses from and into darkness, its inner light dictated by connection to a computer tracking the emissions of a dying star, linking spiritual to celestial and human history to the universe’s. Effect: mesmerism with a wow factor. 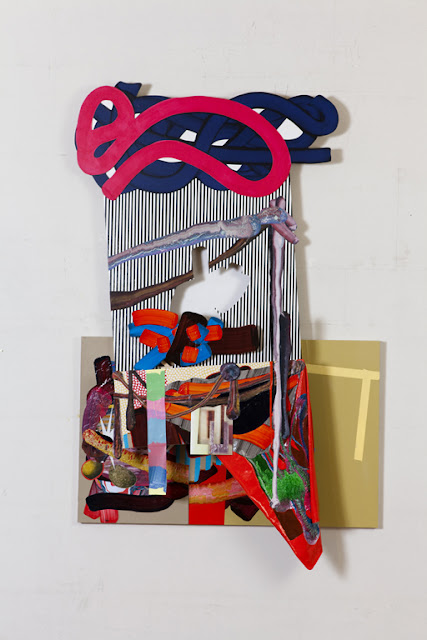 Wil Murray: Painted Shut @ Vitrine, Bermondsey Square (24 hrs) &  183-5 Bermondsey St – Bermondsey
To 24 Feb: www.vitrine.gallery.co.uk
Vitrine now has two aspects: its original titular run of windows on Bermondsey Square, and a more orthodox space 100 yards north.  During February you can see Canadian Wil Murray in both. His primary practice is cunningly cohesive mash-ups of an extensive stock of found and self-shot photographs, woven elements, naked paintstrokes transferred from glass, and reproductions thereof – all combined on multiple levels well-suited to dwelling behind a further layering of glass. Back in the gallery, the performative aspect is brought out in multiple exposure photographs of work in different states, and in a witty ‘make your own Murray’ edition to cut out.
Mela Yerka: What red blue is in? @ Maria Stenfors, unit 10, 21 Wren Street – Clerkenwell
To 16 Feb: www.mariastenfors.com
That confused title is apposite, as young Polish painter Mela Yerka’s paintings all relate to the world as experienced by ‘feral children’: sad stories, but raising the classic questions of nature versus nurture in stark form. They range from direct portraits to apparent still lives, such as the tumblers in which Genie Wiley kept a supply of water obsessively to hand. What makes this more than a socio-philosophical diversion is the painterly way in which differently-formed worlds are conjured through means additive (egg tempera; glass panels with thread; silver leaf…) , subtractive (bleach on unprimed canvas) and materially neutral (velvet paintlessly stroked into an image).

Kris Martin @ White Cube, Mason’s Yard – Central
To 16 March: www.whitecube.com
Idea-rich Belgian artist Kris Martin suggests that the threat to the viability of the world’s bee populations is one of many domino effects imperilling our whole future: honeycomb works in the top gallery, 104 sandstone gravestones ready to trigger a crashing wave in the lower space. What’s more striking, though, is the beauty of the bee works, made through a chance-driven process of thrusting rectangular sections of cells into sand, adding ceramic crystals, burning them and then casting the remainder to leave a bronze frame within which a variable proportion of ceramic and bronze hexagonal cells remain.
Clunie Reid  &  Jodie Marsh / Raymond Pettibon / Black Monday / Kernel @ SPACE, 129-131 Mare St – Hackney

To 17 March: www.spacestudios.org.uk
Curator Paul Pieroni has a knack for unearthing tediously fascinating films: here the long and barely audible late 80’s slacker punk dialogues of the subsequently famous Raymond Pettibon; and two hours of attempts – mostly unavailing – to engage with passers-by outside Factory Records on the day of its closure. More directly communicative is the first in a planned series of staged dialogues meddling with the conventions of art talk:. Text #1 finds glitz-deconstructionist Clunie Reid discussing image-evolution, tattoo-censorship and self-assertion with glamour-girl-come-bodybuilder Jodie Marsh. Add Anglo-Hellenic art/architecture collective Kernel’s installation, generating sculptural form by using reports on the economy as a score of sorts, and Pieroni has woven  a most diverting conversation between conversational works.


This extensive and varied show can be appreciated as spectacle, as Beuysian dance of materials, or as test bed for two decades of Grey’s teeming ideas. Dip into an hour long double-screen simulation of a sequentially accelerated quaquaversal journey through the solar system; bathe in sleek orange-vitrined installations of TVs, cameras and radios turned into eternal proto-types by coverings of oil-moistened clay; toddle into a sand pit to  play with building blocks matched to the aspect ratios of cinema screens and traditional painting formats. Then consider the principles of progression and the cute possibility that the tropes of artistic modernism emerged from the unacknowledged source of… the kindergarten. 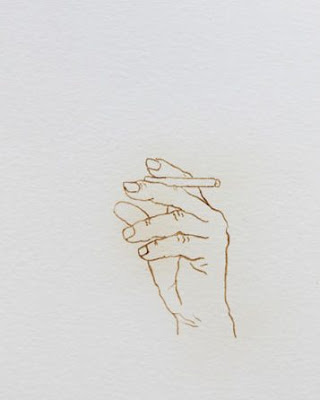 David Jablonowski turns the digital into the sculptural to some effect in Max Wigram’s main space, but I’m more drawn to the circular logic of 22 hands depicted in smoking action in the new Back Gallery.  Anglicised Czech Pavel Büchler has sourced them from uncensored photographs – recent reproductions often edit out cigarettes –  of the smoker-heavy groups of Beat writers (Burroughs, O’Hara, Kerouac…) and French intellectuals (Sartre, Goddard, Barthes…) who have inspired him.  The drawings are made using car battery acid, which is turned brown by the heat of the artist’s own cigarettes: Buchler says he needs to smoke eight per drawing on average.  From smoke to smoke via the combustion engine, then – a polluter’s charter which yet picks up a waft of nostalgia.

Matt Bryans is known for his newspaper collages, and his 4th show for Kate MacGarry concentrates on landscapes:  torn combinations up to 10 metres wide, some pieces of which retain the ghost of a frontal image, others being rubbed through to the point that it’s the text on the back which we can just about make out, demonstrating that it’s not only the landscapes which have depth.  Bryans has always liked rootling around outside for detritus. Relocating from London to Norway hasn’t changed that, and here he extends the erasure principle with a floor installation of bricks which he’s happened on and lovingly carved back with a flint, as if to discover the pebbles retained inside. I saw a stone aged riff on Carl Andre and on Giussepe Penone’s whittling of a plank back to its inner tree: Bryans told me he was thinking more about the bricks thrown by rioters or by Ignatz Mouse at Krazy Kat…

Analia Saban: Datum @ Josh Lilley, 44-46 Riding House St – Fitzrovia
To 21 Feb: www.joshlilleygallery.com
Rapidly rising Italo-Argentine-American Analia Saban coincidentally chimes with Murray’s layering, Yerka’s use of  subtractivity and Byans’ building materials in contrasting two bodies of work which riff on the history of painting processes. They ricochet back and forth between complex and simple, heavy and light, plain and decorative with the look of what you might need to make a habitable house: concrete, whitewash and electric circuits.  The concrete is poured onto canvas to make subtly varied monochromes which only pretend to be slabs. The white paint is intricately cut back by laser to make apparent circuitry complete with sections of covering board and gaps between the ‘wires’.
Fiona Rae: New Paintings @ Timothy Taylor Gallery, 15 Carlos Place – Mayfair
To 23 Feb: www.timothytaylorgallery.com
It’s easy to forget that Fiona Rae was in the Freeze show which kick-started the YBA phenomenon, so consistently has she practised a painterly abstraction atypical of the group.  Yet a spirited anti-conventionalism still peeks from her canvases: here, for example, the injunction against working with animals might seem of little relevance to an abstract painter – but Rae founds a way to ignore it just the same in the form of the Chinese embroidered pandas, badge-like and cartoonish, which populate these new works. Are they frolicking in the world of paint, commenting obliquely on compositional tropes, or allowing Rae to self-mockingly undermine any potential for art historical seriousness?  Whatever, it’s hard not to enjoy their impish presence…