Here is the latest in Paul Carey-Kent’s rolling top ten, together with previous choices which you can still still see… 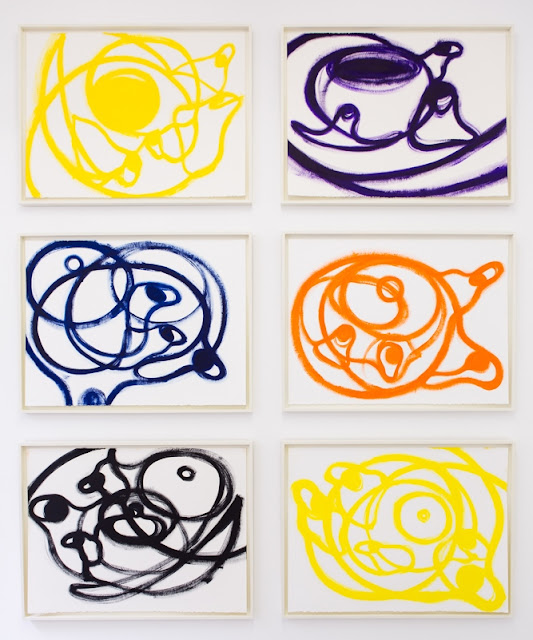 Dancing with a teapot, 2015 – oil on paper
It says something for Alex Cecchetti’s charisma that the audience stuck with him during the two hour tour of the building which kicked off this show, and which you can now sample on video. The Franco-Italian artist runs the gamut of performative approaches: he draws clouds (without looking, so as to surprise himself) then has the viewer fly among them by following his lines while playing a birdcaller; dances round teapots, outlining their phallus and womb spouts and interiors as he goes; pays homage to the movement required for female masturbation in a wall drawing made with blackberries; and requires that the gallerist leaf through fifty drawings of lovers entwined just once for each visitor, so that they become unrepeatable actions. Then there’s a Blakean backstory, and sculptures…. quite a quantity of diversions for a small space. 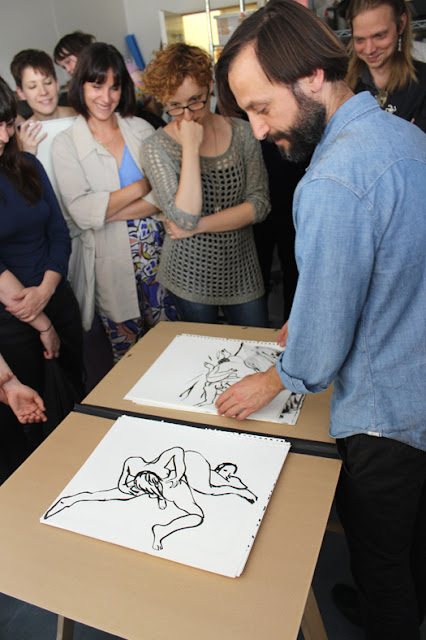 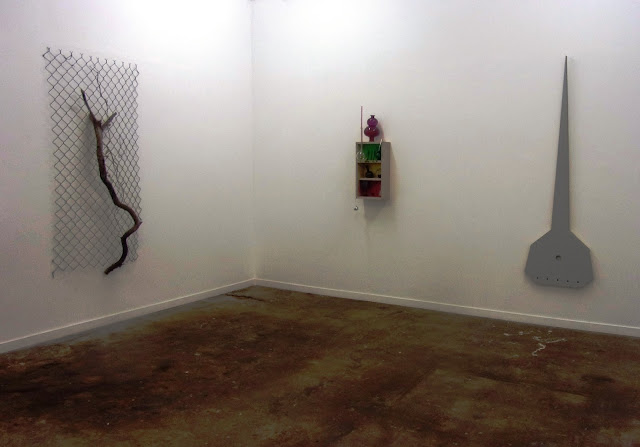 Charles Harlan’s Tree, 2014 and Michael Rey’s Fromes, 2015 either side of Elias Hansen’s strikingly titled glass on self work If fucking would’ve fixed this, I’d have fucked the shit out of you a long fucking time ago, 2015 Here come – how many can there be? – yet another dozen ways to deal with the language of painting without doing anything as obvious as picking up a paintbrush. Thing is, though, most of these 15 young Americans bring a zingy freshness and imagination to the trope: Charles Harlan just cuts out a section of chain link fencing with a tree entwined; Michael Rey makes industrial objects masquerading as monochrome paintings which turn out to be ceramics masquerading as both; Sam Mayer makes a painting of textural contrasts and a face of sorts by abutting canvas and marble shapes; Aaron Bobrow allow blue tarpaulin to fade and break down outside until he considers it ready. What sounds like a serious investigation into boundaries and forms turns out to be a feel-good summer show. 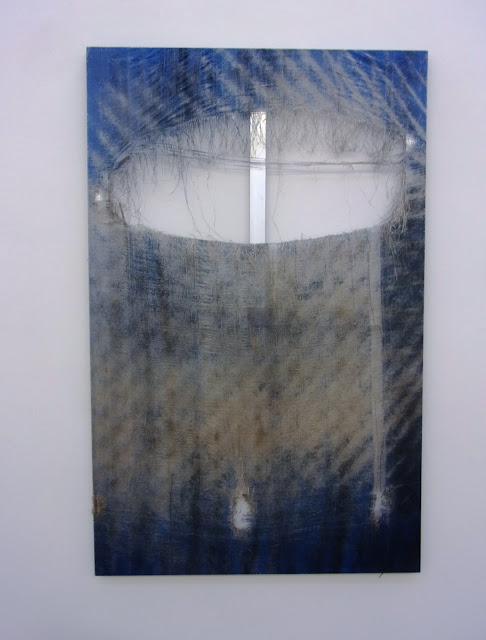 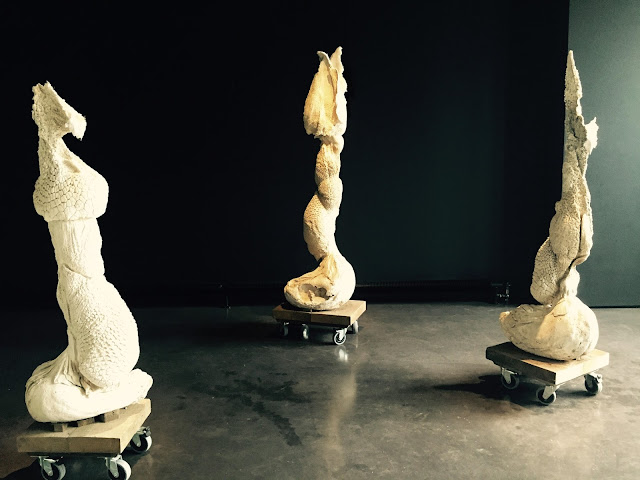 ‘Invited’ is a pop-up in a just-renovated and surprisingly extensive Notting Hill house in which many separate spaces are turned over to a mixture of contemporary art and medieval carvings as the property is marketed. I was almost bound to like it, as Flora Fairbairn and Philly Adams’ curation could have been derived from Paul’s Art World: I’ve written on recent shows by Jodie Carey, Alastair Mackie, Liane Lang, Alejandro Ospina, Jodie Carey, Rafael Gómezbarros, Boo Saville, Dominic Beattie, Phoebe Unwin and Tim Ellis… and they all have good work here! And yet I was most struck by the new to me Alexi Williams, who has three rather baroque plaster sculptures on dollies: they look a little as if Rebecca Warren has turned to working with a cake decorating gun, but were made by filling and casting the somewhat floral complexities of cows’ stomachs. 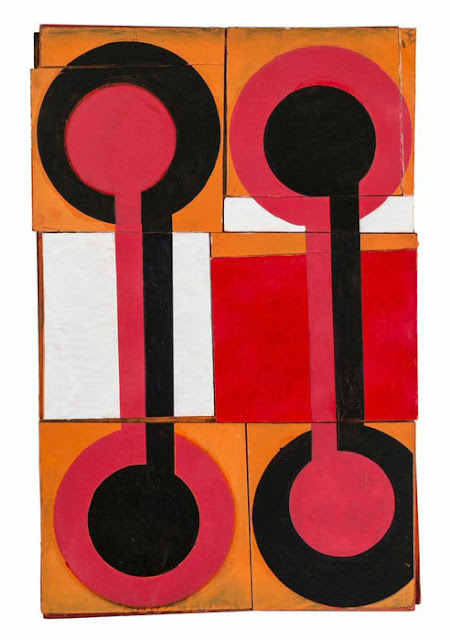 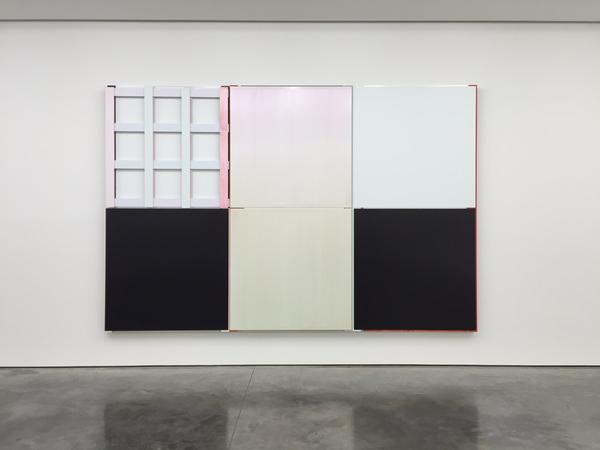 Oddly, White Cube has the first solo London by the seminal German abstractionist Imi Knoebel, who has had any number of such shows elsewhere,  and it’s well worth seeing.  There’s also a table by Knoebel at the beautifully appointed new premises of Jonathan Stephens’ Rocket gallery, together with new work by another German minimalist with a wider crossover with furniture. Lars Wolter makes all his own superbly crafted painting-objects. Here he has four separate streams of work,  much of it – like Knoebel’s – exploring colour, but I also like the more chromatically restrained series which can be read as a sleep-scape punctuated by dream events. 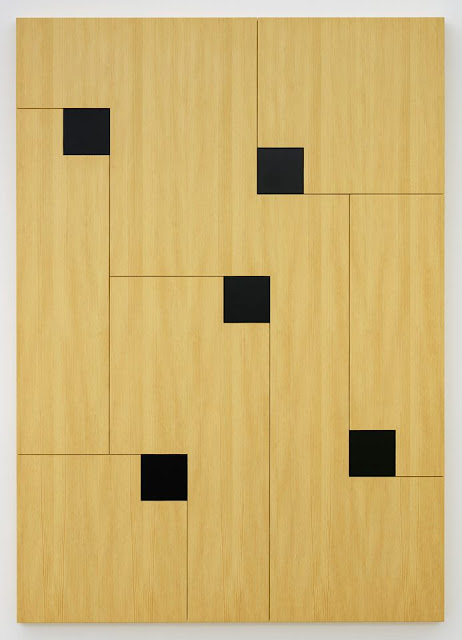 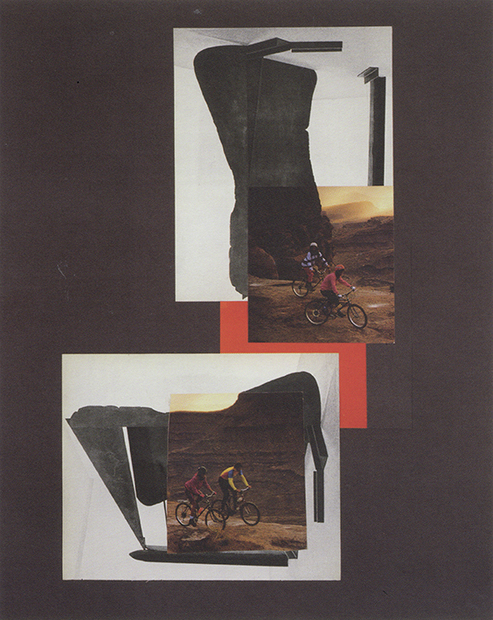 Untitled, 2013 – collage, 63 x 50 cm Thomas Eggerer’s show isn’t called ‘Ozone’ because it has an environmental message, but because the  aerially viewed characters, often glimpsed partially, seem to be in a zone of their own – the O–Zone, it’s implied – and inhabit abstract areas of  areas of misty colour as if it were their world. I like them, but was especially struck by the New York based German’s less often seen collages.  The first two in a group of five fold and reflect repeated  images of  sculptures by Anthony Caro into more quotidian scenes, the next repeats the trick with a Calder, and the other two use modernist architectural details to a parallel effect.  Not only is the  splicing of form and content elegantly persuasive, it’s topical ahead of this year’s major restrospectives of Caro in Yorkshire and Calder at Tate Modern. 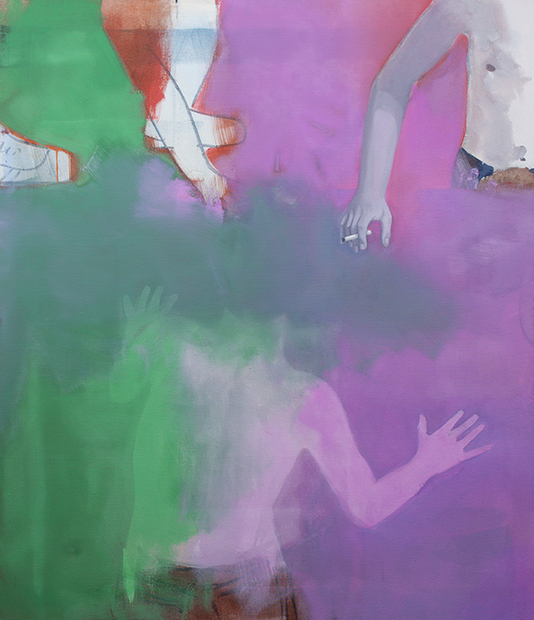 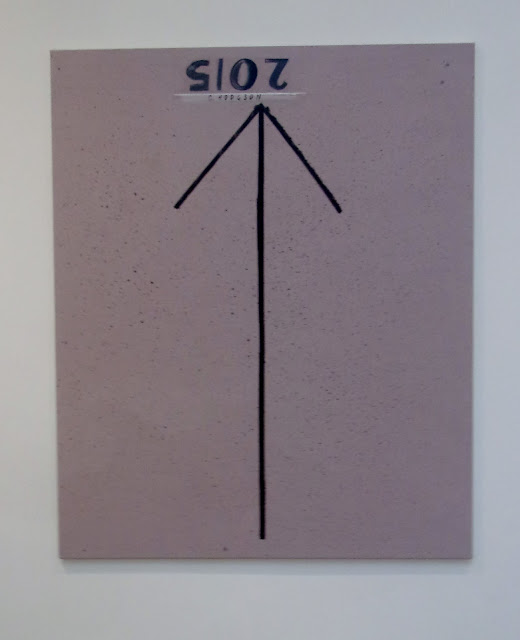 This is quite the smorgasbord: New York mutli-tasker Matthew Higgs pairs his droll found text works, extended here from isolated phrases to the attachment of favourite books to the canvas, with the plangently diaristic abstract drollery of Clive Hodgson His nine paintings demonstrate, largely on  a bigger scale than previously typical, that he’s far from running out of new ways to relish and subvert the combination of simple gesture, obtrusive signature and date.  Higgs then mixes things up nicely by pairing that show, across both floors, with five figurative artists born in 1977-80. Of those I warmed most to Texan Daniel Rios Rodriguez’s small paintings encrusted with objects and wit, and Canadian Jane Corrigan’s slippery scenarios fluidly realised wet-into-wet: here her character seems to be preparing carrots for a rabbit she has killed with some sort of pastoral castration sub-plot going on. 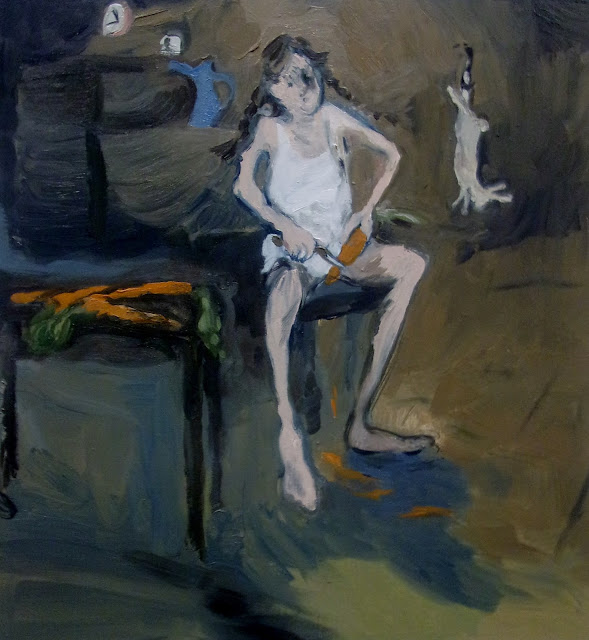 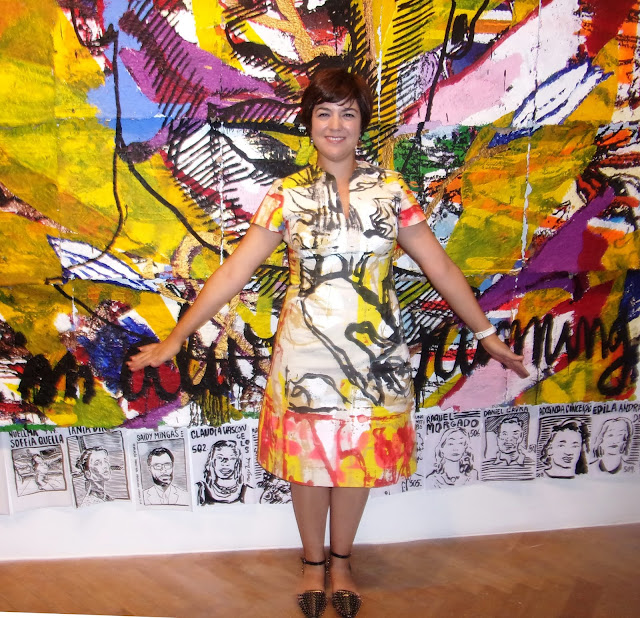 The show’s curator, Rita GT, has designed her clothes from Francisco Vidal’s paintings
We’re getting some African weather, so why not check out this feelgood slice of Angola, actually a version of the national pavilion currently at Venice. That in itself reflects transportable nature of the concept: it’s an open studio set up by artists collective e-studio Luanda. The means of production are unpacked from the U.topia Machine, aka a plywood box on the floor. Painter Fancisco Vidal is holding the most prominent court, covering the walls with intensely colourful abstractly-patterned faces on handmade paper and rapidly sketching all-comers: my wall portrait was number 552. The idea, in a neat reversal, is to produce, distribute and share by traditional means a version of online experience. 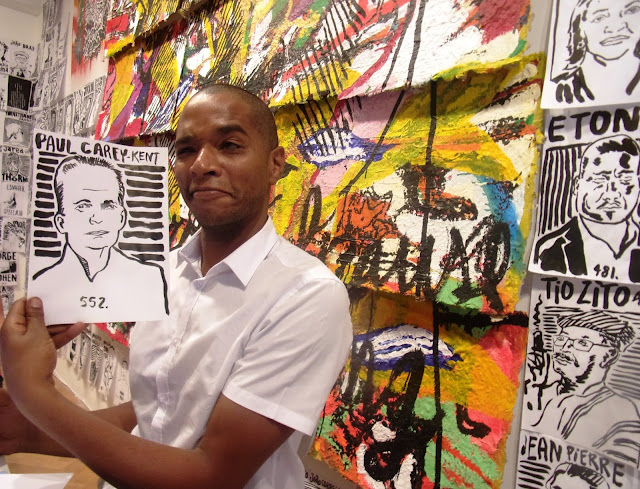 Francisco Vidal with one of his portrait drawings. I should add that they’re not meant to be realistic… 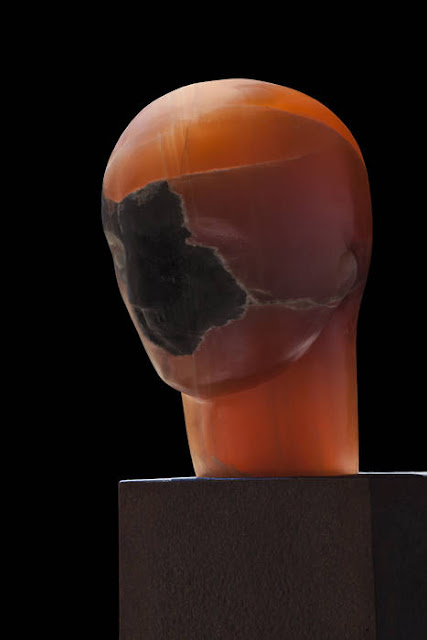 Emily Young, though born in London was partly raised in Rome and recently returned to live in Italy, where she works with the most traditional of means– free carving  in the manner of Michelangelo. Yet there’s a 60s counterculture feel to how she sees her conversation with stone as being ‘small part of mankind’s most serious, most elemental conversation, that with Earth’. So it makes some sense that in her youthful days experimenting with drugs she was the Emily in Pink Floyd’s ‘See Emily Play’. Here, in the London half of a show shared with Venice, she shows an ability to release faces from a huge variety of minerals – typically discards from defunct quarries, which she prefers for their characterful imperfections. 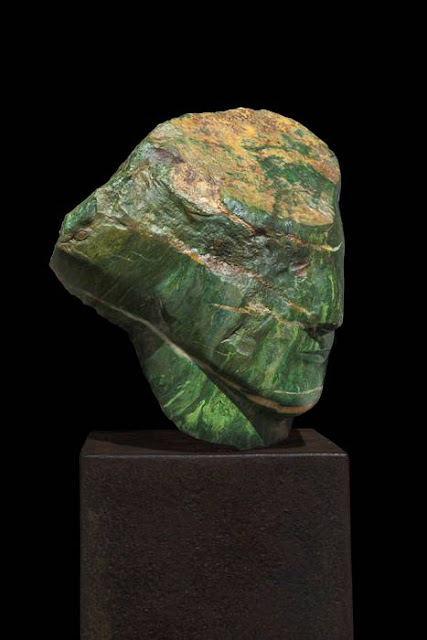 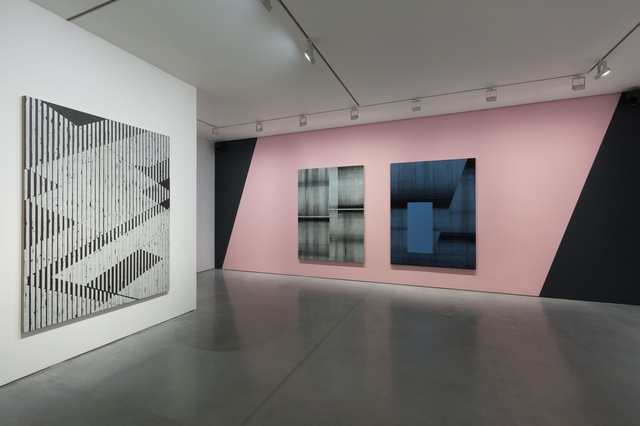 Justin Hibbs’ first solo show at Carroll / Fletcher is something of a multi-dimensional juggling act. It’s simplest to start with his version of Joseph Albers’ album cover  for Mussorgsky’s ‘Pictures at an Exhibition’. That connects with music and design, and is made with a pin-striping machine on linen, causing glitches which link to the humanising acceptance of errors in even the most computerised of future imaginings. The music cues the show’s ambient soundpiece, and the glitches anticipate the crashed computer screen as a generator of sleek abstractions which set off a dance of two and three dimensions as paintings fold out into sculptures. It’s too complex to describe quickly, but preliminary ideas form a sort of brain in the central room, and some domestically coloured walls offset the industrial aspect of what proves a seamlessly holistic show.  Given that Hibbs embraces the fault, I’m tempted to complain,  does his show itself have enough? 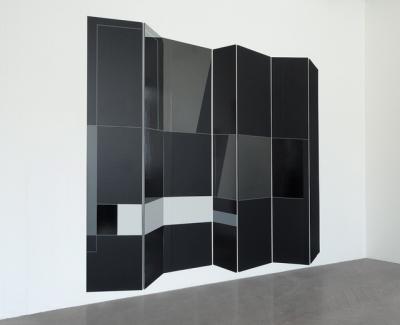 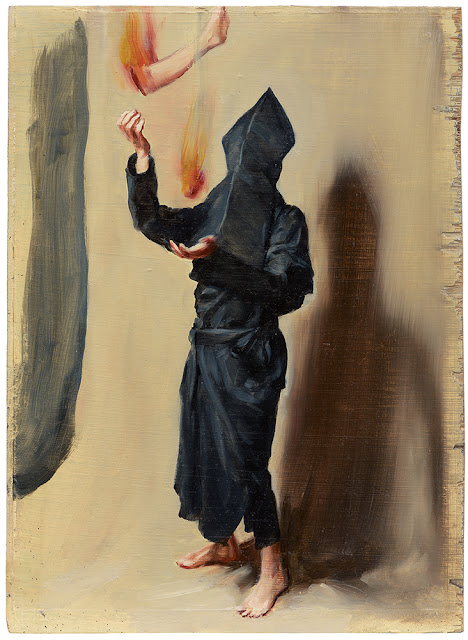 Black Mould / Juggling with Fiery Limbs II, 2015 – oil on wood, 34 x 28 cmJust when you thought the dead good of Guston (Timothy Taylor to 11 June) would overshadow any living painter, up steps Michaël Borremans with a tour de force of dark and sepulchrally presented ritual. Goya, Abu Ghraib, and Japanese theatre meet dance to the implied sound of Black Mold, a chunk of the Jon Spencer Blues Explosion’s alternative rock. Downstairs Pogo is one fifteen part work isolating black-robed figures as a prelude to their full-scale interaction above, where robes are lifted, a severed hand used as a tool and the mood ambiguated by the introduction of a badger, whose song we can only imagine as his score is a blank sheet of paper. Surely it’s not from ‘The Wind in the Willows’?
See Top Photo Black Mould / The Badger’s Song, 2015 – oil on wood, 22 x 31 cm 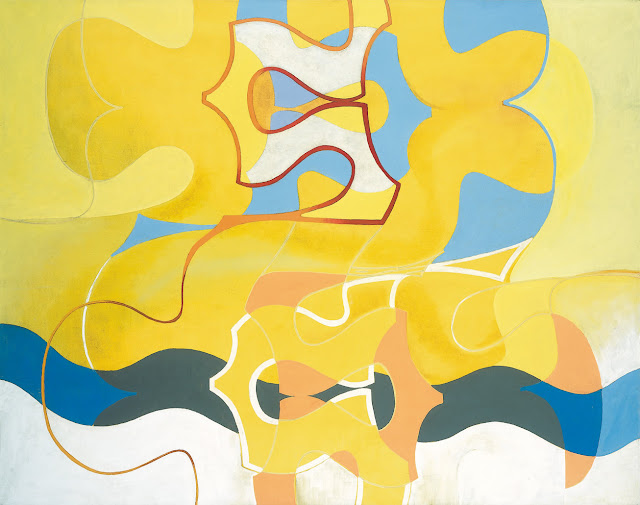 Art First quite often conjures an interesting mix of classic British modernism above more current work in the project space below, and so it is here. A selection by Wilhelmina Barns-Graham and her circle includes  large and darkly glowing geometry from her own Outside Inside – Meditation Series, some lively Roger Hilton and a lyrical, indeed summery Bryan Wynter from the very winter of his life (1915-75). Downstairs you’ll find Dolly Thompsett’s latest layerings – material and art historical – of nature charged with desire, often disguising secrets in amongst the intricacy. The surprises for me were small works which allow her characteristic ground of patterned fabric to take over much of the painting; the new still life motif of the pictorially decorated oval serving tray; and her having found a dress so appealingly in tune with her paintings… 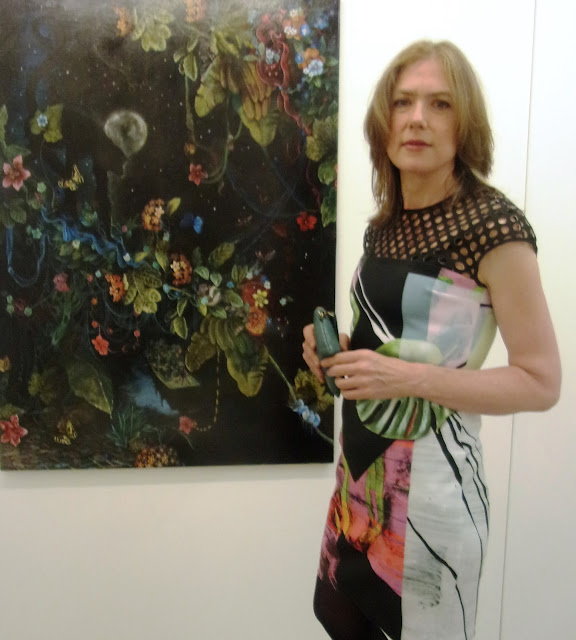 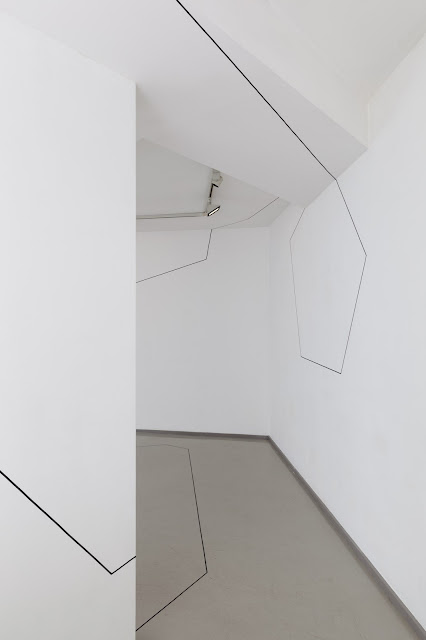 Gary Woodley has developed a site specific practice which consists of the ‘impingement’ of an imagined three dimensional form in and around a space such as a gallery’s. They might almost be better left imagined than realised, but then there would be nothing to see: rather, Woodley delineates the imagined object’s points of intersection with wall, floor or ceiling. This results in lines on their surfaces – originally inspired by how a bubble breakks on a wall – which aren’t so much the work in the form of a drawing as an indication of the imagined object’s shape and volume.  Here we have not just the second time Woodley has impinged on Laure Genillard’s space, and with increased computer-aided precision, but also 2D and 3D editions showing how it works, and  a free publication with an informative and well-illustrated overview of Woodley’s practice since 1982. 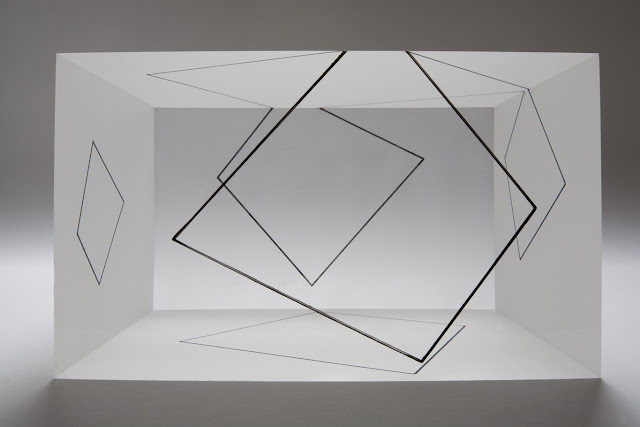 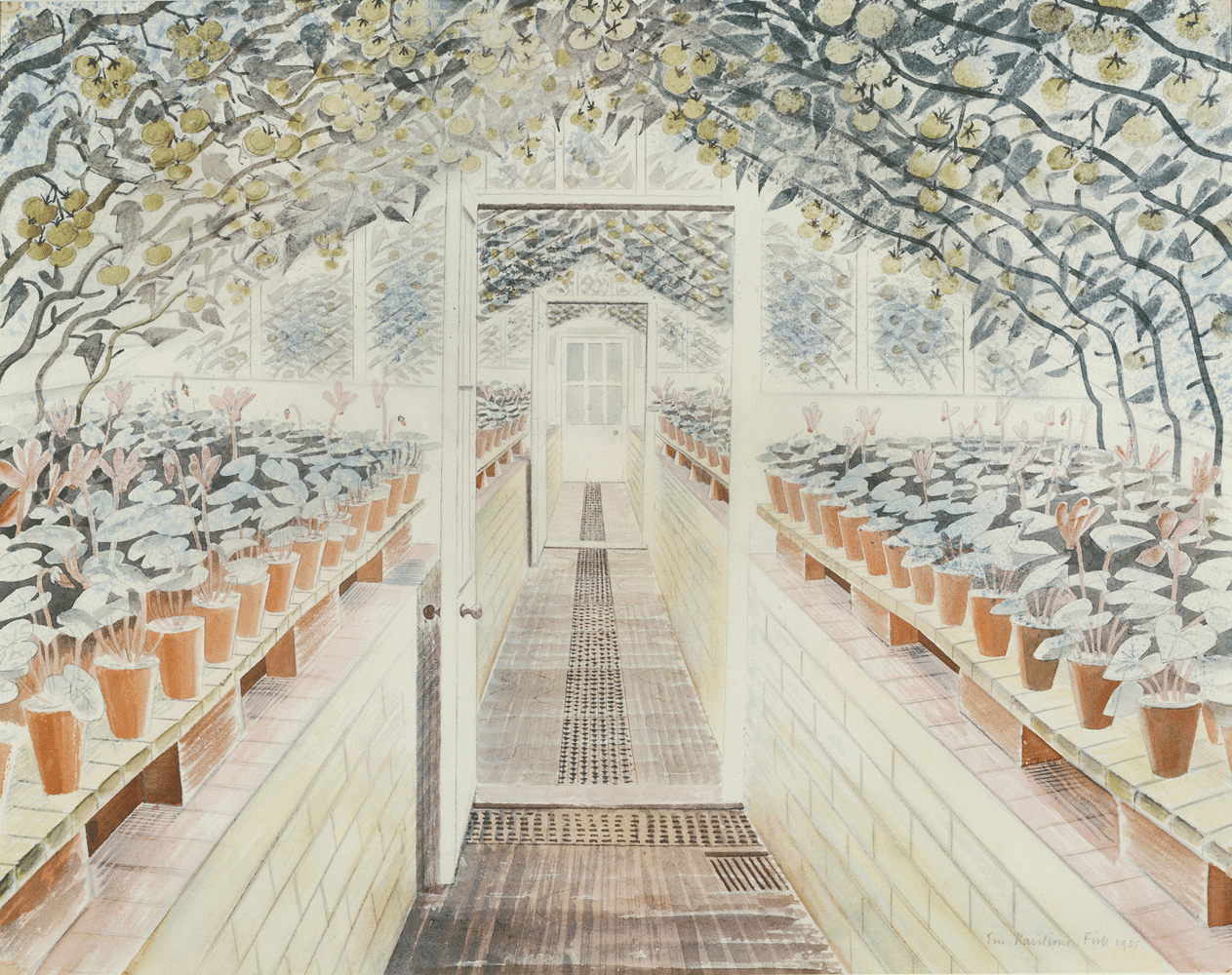 The Greenhouse, cyclamen and tomatoes, 1935

It isn’t hard to work out why Ravilious’s paintings appeal: his quirky eye for the objects and landscapes of the decade to his death in 1942 plays in to nostalgia tinged by the war to come or in progress; his apparently straightforward depictions are seeded with an almost vertiginous sense of underlying strangeness; he has a remarkable sense of how to build up a persuasive whole from detailed patterning of grass, sea, wallpaper or repeated flower pots, largely achieved by importing experience of making woodcuts into his watercolour production; and he has the most amazing watercolour technique, lighting clarity from within through  the blazing white of the paper. Art history has taken little notice, but these 80-odd paintings are your best-ever chance to enjoy a ravishing achievement. 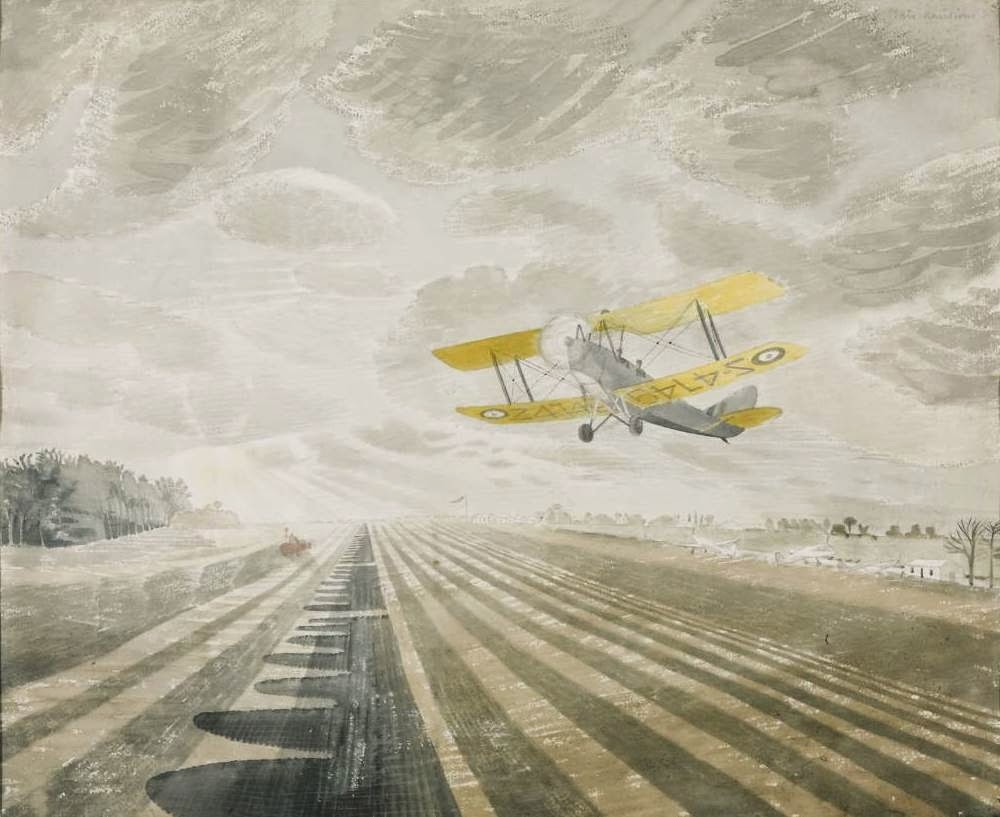