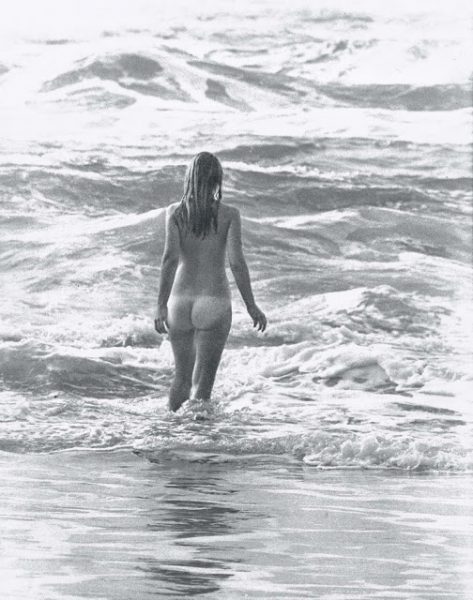 Anne Collier, Positive (California), 2016 in ‘You Are Looking at Something That Never Occurred’

Spring is bursting forth with photography shows, perhaps on the basis that the Photo London (18-21 May at Somerset House) will see the full blossoming. Wolfgang Tillmans at the Tate, ‘You Are Looking at Something That Never Occurred’ at the Zabludowicz Collection, the Deutsche Börse prize show at the Photographers Gallery (which has 4/4 worthy winners), ‘Double Take’ at Skarstedt  and Christopher Williams at David Zwirner are prominent and impressive manifestations, Saatch’s selfie show prominent but (though there are good bits) a mess. Roger Ballen at Hamiltons is also worth mentioning, and here is a couple of other less obvious choices from the bouquet: 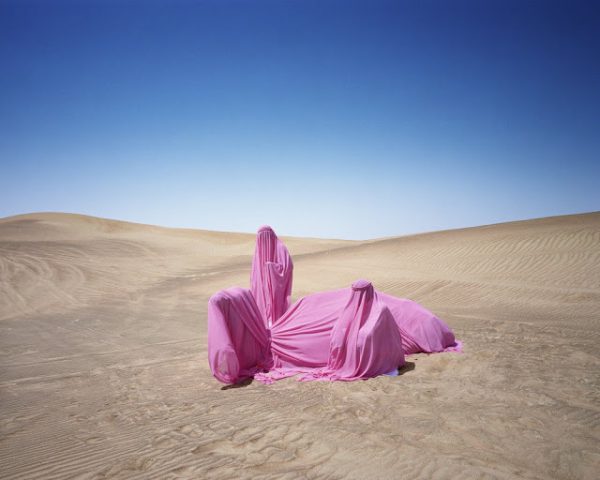 Flowers is blooming just now, as the gallery has its best painter at Kingsland Road (David Hepher) and an interesting new-to-Britain photographer at Cork Street. Much-travelled Scarlett Hooft Graafland is one of several photographers to have impressed me in the Netherlands*, and her panoramic landscape images of exotic countries with performative sculpture added  cleverly conjoin beauty, humour, a surrealist streak, art references and cultural import.  TakeStill Life with Camel, made in the United Emirates: an absurd take on Christo which subsumes what could have been a biblical scene of camel and riders into a joyous mass of pink.  Or Salt Steps: the Incredible Hulk meets Koonsian inflatables as a Bolivian man’s would-be-power is lampooned by his inability to see where he’s going. 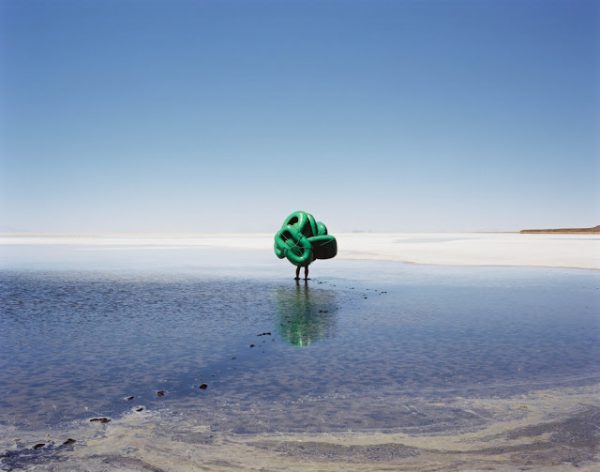 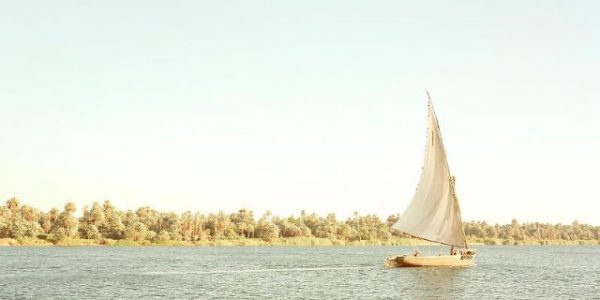 The key to German Elger Esser’s photographs of conflicted territories which appear ‘too quiet’, in the classic Wayne-spoken formulation of the American Western, is his perfect pitch. That brings just the right degree of implication to modest-sounding proposals: ‘fake an archive of views from Israel / Palestine in 1948’;  ‘make big modern photos of Lebanon and the Nile look like fading postcards’; ‘ask another artist to complement your travelogue with paintings of local orchids’ and, best of all, ‘show either side of a border view printed on either side of a sculpturally propped sheet of copper 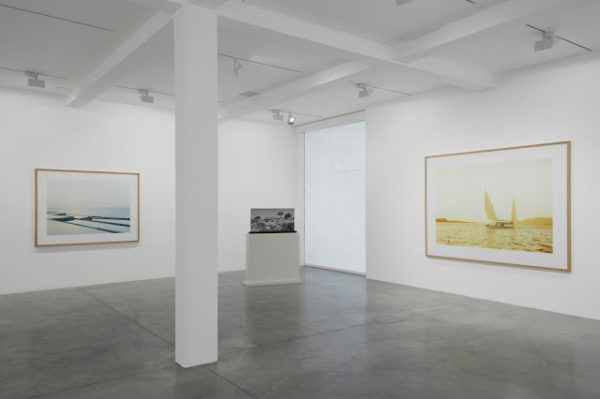 Ella Littwitz: No Vestige of a Beginning, No Prospect of an End @ Copperfield Gallery, 6 Copperfield Street – Southwark
To 29 April: www.copperfieldgallery.com 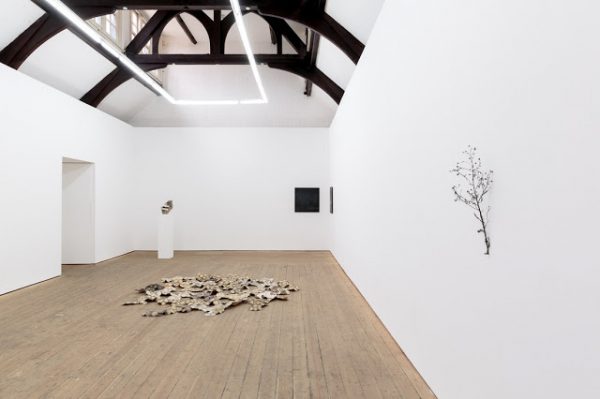 Ella Littwitz provides an object lesson in how to generate a political and emotional charge from simple-looking means – all relating to the expansion of Israel into Palestine territory. A filigree bronze cast of Dittrichia Viscosa represents the first plant to colonise disrupted territory, its allopathic qualities enriching the metaphor. Traces of the non-native pine refer to its mass introduction as a sign of support for Zionism: every Israeli receives a tree on birth, and you can have a plaque in the forest named for you if you buy enough extra trees – the imperialist narrative is strong enough for Hezbollah to have attacked trees!  A sort of cellular growth of connected unpicked footballs evokes the story of how UN officials collected and returned balls which children in a school close the border had kicked into a minefield in 1948. 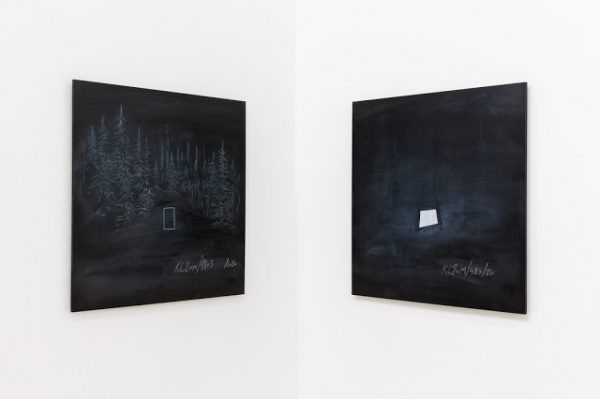 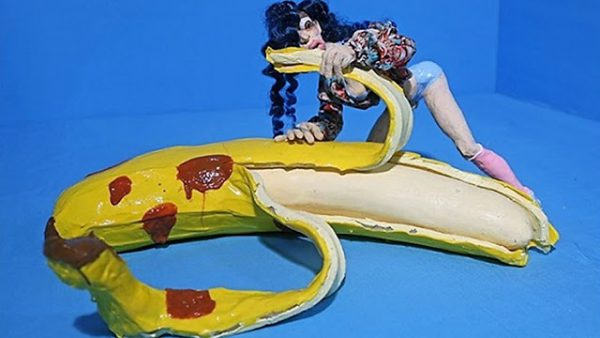 Nathalie Djerberg and her musical mood-darkening collaborator Hans Berg have tended to prefer experiment to formula in recent years, with patchy results. But here they return to what they’re known for, with three short and transgressive claymation films. If you want a goat suckling a tiger, an aubergine car and frankfurter motorbike, turds growing up lively, a moon which moons (buttocks added for the purpose), a doughnut drinking tea, love made to a banana and a well-hung matador applying his best estocada to sponge cake, then these short films are for you.  It’s hard not be jealous of such a playfully perverse subconscious. 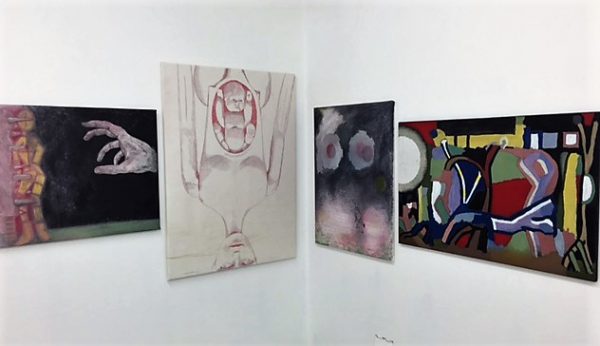 Toronto artist Aleksander Hardashnakov is an arch avoider of the signature style, but there’s a dark humour to quite a few of the 21 canvases which ring Union Pacific’s space cheek by jowl. He says ‘everything is inspiring’, and they channel all sorts of templates from Georgia O’Keefe to Kasimir Malevich. Hands meace, Barbie is pregnant, keychains cause stress… The circle of works is reflected in a charity collection style sculptural contraption in which coins run around hypnotically before disappearing down its black hole… to land on the floor. So much for the show’s economics, you can retrieve your money. Hardashnakov would like to make this as a public sculpture open to vortex-addicted skateboarders. I’d like to see that: the next 4th plinth vacancy is in 2022… 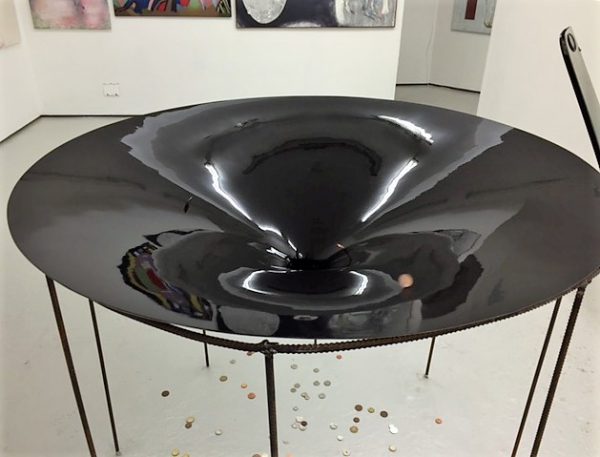 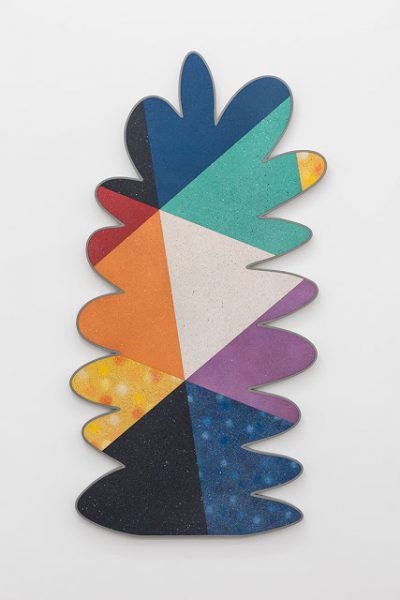 ‘Two painting shows in a row!?’, I teased Dave Hoyland, ‘Are you selling out?’ ‘Luckily’, he says, ‘yes’ – which must be welcome after Seventeen’s ill-fated New York venture. And it’s easy to see why Rhys Coren’s funky abstractions, originally scheduled for the US, are popular. But there’s quite a lot to them, too: they’re not straight paintings but combinations of laser-cut wood like intricate puzzles; the colours are muted yet lively in combination; they’re replete with complicating effects like blurred areas, drop shadows and surfaces treated to resemble patio paving; each has a snappy title and these are joined up to turn the press release into a poem… Dance the dance, dancing feet / Red-faced with embarrassment / Cheeky, cheeky. Naughty, sneaky / Shame on you (if you can’t dance, too)… 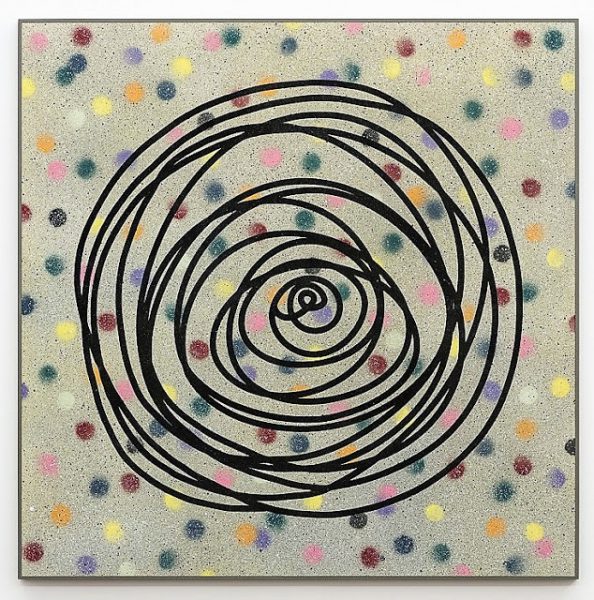 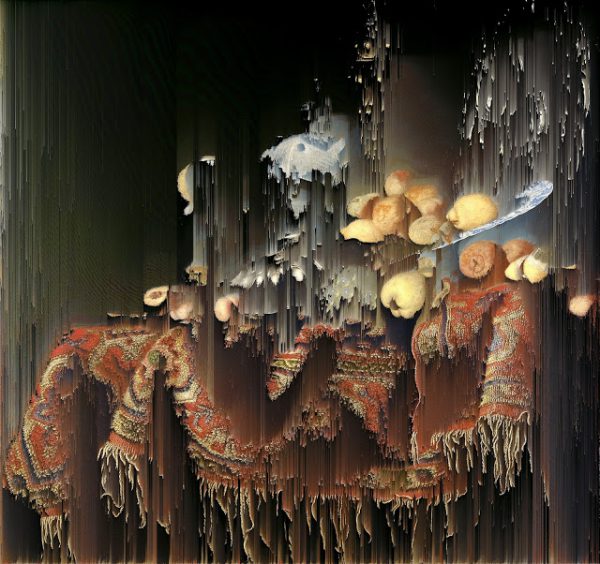 Gordon Cheung is known for apocalyptically coloured paintings which play against the collaged backdrop of stock listings as a charged way of exploring capitalism and its cyclic discontents. These, have become increasingly baroque, as in the tulips in which pre-sculpted paint forms fully modelled petals. Now two new series play off that practice. Grand panoramas use sand to irritate the surface as they subvert Chinese painting traditions by showing 21st century realities. And digital prints on canvas run with the computerisation of stock listings and the distortions of the market, by allowing a programme glitch to disrupt the data files of their image sources to bewitching effect. These, even when you know they’re the only flat works in the show, often look remarkably textured. 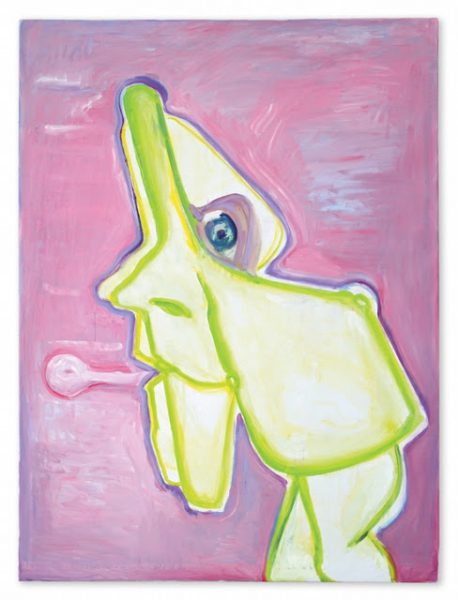 Following her shows at the Serpentine (2008) and Tate Liverpool (2016), it’s not exactly a secret that Maria Lassnig (1919-2014) was one of the best painters of the last 50 years, but this estate-driven show reinforces the point with examples not previously seen in Britain. It clarifies her geographically-driven phases rather well: from early Viennese experiments in hard-edged abstraction to more expressionist abstracts leading up to her move to Paris in 1961, where she developed her ‘body-aware’ style of figuration. Relatively realistic works followed as she found herself a painter reacting against the prevalent conceptual use of media in New York (1968-80). She returned to Vienna in 1980 to become, at 60, the nation’s first female professor of art. Self-portrait with Speech Bubble is typical of Lassnig’s late, great flowering, showing her concern with the directly sensing parts of the body – no need, it seems here, for a brain. 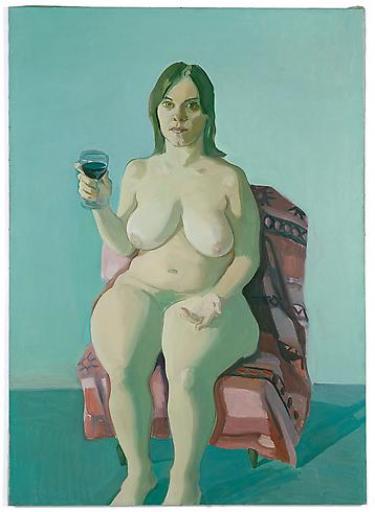 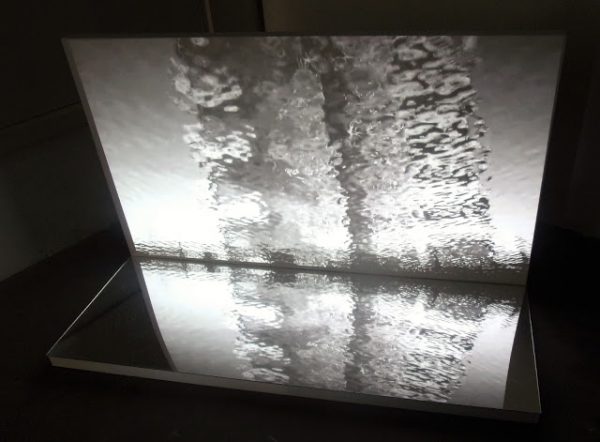 There are several good reasons to visit the Griffin Gallery. Free coffee; the sculpture, paintings and drawings exploring ‘architecture as metaphor’ have been chosen astutely; Phyllida Barlow, just ahead of her Venice appearance, links a typical sculptural pile to a spot-on stream of consciousness about getting lost in The Barbican (we’ve all been there if we’ve been there); Peter Newell-Price pulls off the improbable project of making a rose window out of graphite. Yet the main reason for attendance could well be the film works by Gary Stevens, Evy Jokhova, Jemima Burrill and Lucy Gunning. 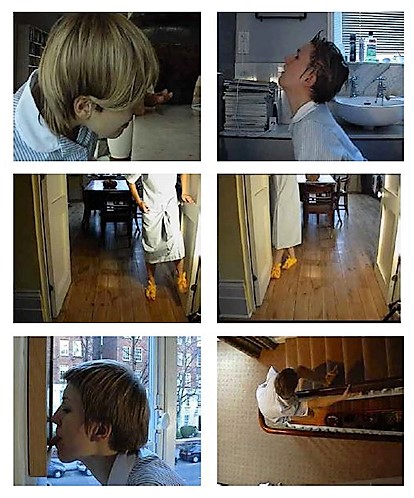 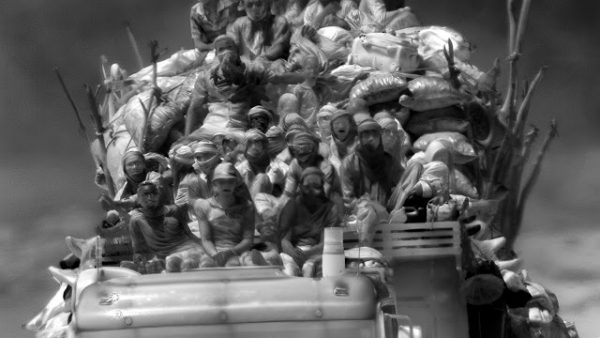 Richard Mosse made a big splash at the 2013 Venice Biennale with his film of the ongoing war in the Congo. He shot it with discontinued reconnaissance infrared film which turned much of the battle scenery pink, so infecting the scenes with a surprising look which also carried political resonance. Can he replicate that kind of impact? It seems so: The Curve features film footage centring on refugees movements and still images of the associated camp infrastructure. Both are taken with a thermal camera which can distinguish people at a distance of 30 km and, as such, is classified as a weapon for export purposes. Again, the aesthetic is beautiful and distinct. Seeing thermally removes racial differences but emphasises mortality. Even though Mosse doesn’t really exploit the unusual dimensions of the Curve, his name can be added to the list of artists who – out of 27 high-quality commissions – have excelled there over the last decade: Richard Wilson, Clemens von Wedermeyer, Robert Kusmirowski, Celeste Boursier-Mougenout, Song Dong and Random International. 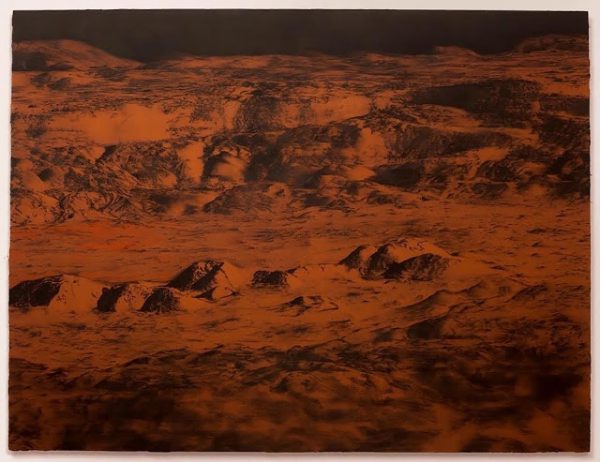 As the show title spells out, perhaps a little too didactically,  Saad Qureshi’s two new streams of work combine time, memory and landscape. The results might be called mindscapes: big vistas made with charcoal applied to the sumptuous surface of brick dust create memories of nature in the classic material of the manmade, and smaller views burnt into the paper with a soldering iron suggest how places may be seared into the memory. Both those resonant uses of material took effort: it wasn’t a simple matter for Qureshi to find a supplier willing to crush their bricks to powder for him; and the six works on paper are the survivors from 37, most of which caught a little too much fire! 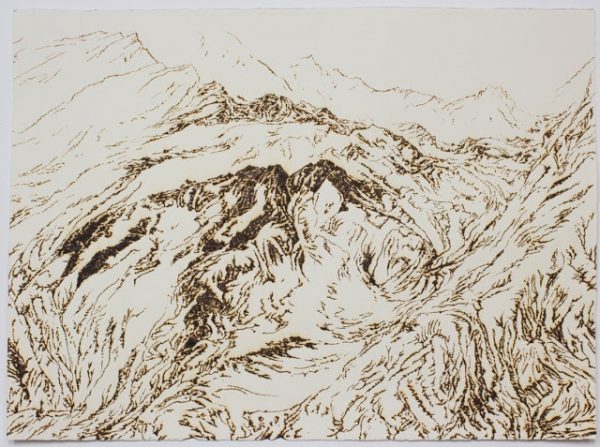