Why is it that when the tourists arrive, the galleries close? Paul Carey-Kent takes a look around the London galleries and discovers just how quiet it is in our capital, in August. Many of the galleries have closed their doors for a well deserved break but there is still plenty to do and see around town.

Lie down, take it easy in the August heat… and contemplate some generally quiet stuff, even in the case of sound art. Plenty of grey, starting with the Caulfield above (from the outstanding show at Tate Britain to 1 Sept), in which the moon of light seems to have paradoxically little wider influence. If you want noisy, by the way, I commend Emma Hart at Camden Arts Centre.

Life and Nothing Else Actually it makes sense to start with a rasm (drawing / pattern / record / ceremony and more in Arabic) on layered tracing paper: their tremulous departures from the grid led to German-Egyptian Susan Hefuna’s best-known forms: wooden screens (or mashrabiya) with the charged purpose of keeping women from view, albeit in Hefuna’s experience ‘most human beings are not able to see the world without a screen of social and cultural projections. The mashrabiya for me became a symbol that operates in two directions with the possibility for dialogue, rather than closure’. The gracefully economical Arabic text, neatly made from extra intricacies in the design above, does indeed say ‘Life and Nothing Else’: it makes the English in the smaller metal works look somewhat clunky. 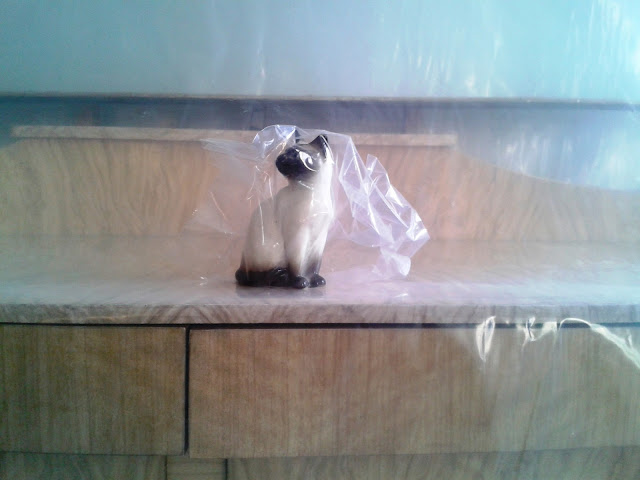 Ian Baxter& (& yes, you pronounce the ‘and’, indicative of a collaborative bent) is such a veteran (born 1936) of the Canadian art scene that he taught Ian Wallace, who taught Jeff Wall. He’s still full of life, though, sporting his own ‘Masturbating Life Makes Art’ shirt slogan at the opening of his first UK solo show. Baxter&’s use of vacuum-formed plastic (40 years before Seth Price) and conceptual japes from the 60’s onwards are certainly worth seeing, but the main reason to visit Raven Row is for his third major bagging installation. That puts the whole contents of the flat above the gallery behind plastic, preserving how it was before the death of Rebecca Levy, who lived there from 1918-2009! The effect is mournful yet curiously clean – and quite different, as Baxter& points out, from the more European practice of wrapping.
____________

At the Moment of Being Heard @ South London Gallery, 65-67 Peckham Rd – Camberwell
To 8 Sept: www.southlondongallery.org 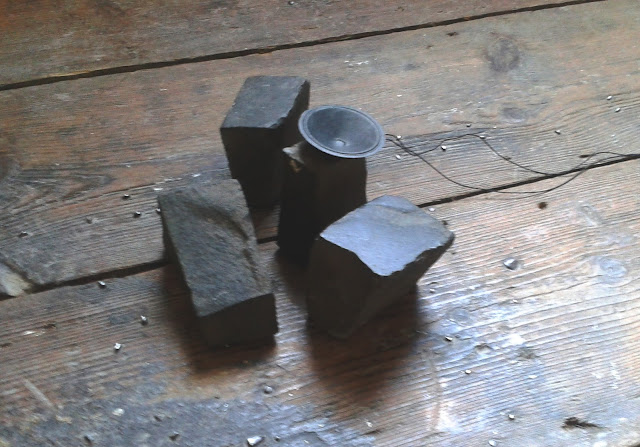 This is the quietest, Zenniest survey of sound art l’ve (just about) heard, due mainly to Baudouin Oosterlynck’s ‘Variations of Silence’ and the rare intimacy which the influential German pioneer  Rolf Julius (1939-2011) brings  to the genre through his expanded notion of music (whereby it can be found everywhere – ‘under the stones/where there is damp/music is cracks in the wall’). In ‘Singing’ (2000), seven low-humming speakers are suspended so that the sound causes pigments on their surfaces to subtly shift; a video installation creates a volcano of sorts in a parallel manner; and a grouping of pebble-small yet formally weighty stones bear a gently chirruping speaker aloft. True, the intermittent Eli Keszler gets effectively louder, but in general it’s good to get close. 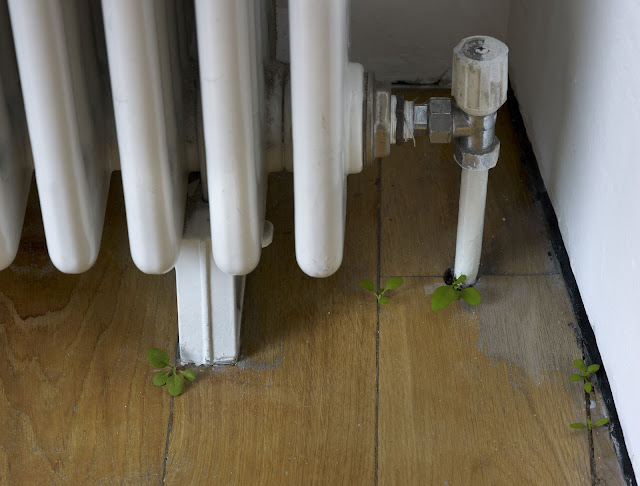 Installation view with ‘Weeds’  Somewhat unusually, the Japanese artist Yoshihiro Suda combines hallucinatory, labour-intensive realism with a site-specificity: his beautifully rendered wooden plants essentially take classical Chinese flower painting and dramatise it for a modern age through interaction with both gallery spaces and other works of art. Here two are placed in fleshy dialogue with paintings by Francis Bacon; two more take centre stage as they feed off the space; and a further group of leaves cluster with such apparent modestly around a radiator they’re easily overlooked. Art, Suda seems to suggest, can bloom anywhere: you should live on the alert. 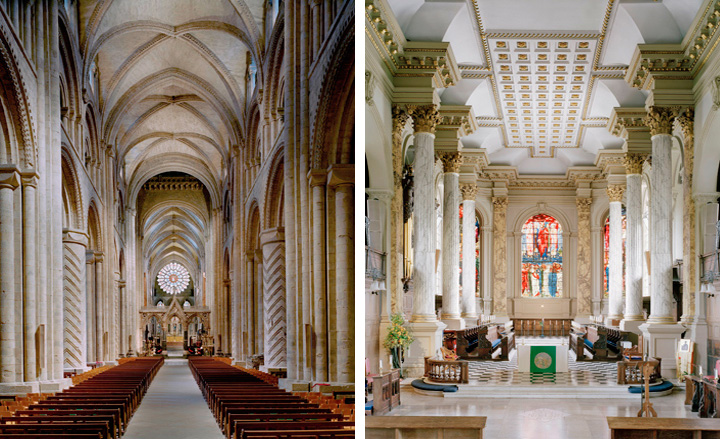 Clare Twomey: ‘Temporary’ (detail) Ironically, one of the most permanent ceramics in the Pangolin’s 10 week part-rotating, part-fixed showcase for ceramics is my favourite: Clare Twomey’s ‘Temporary’, in which over 500 ceramic elements ordered from light to dark according to how the chance ways the glaze has floated down each porcelain element to make up a window of windows with an impression of falling and maybe a cathedral echo. August looks a good time to visit, as it will be the elemental oscillations of Blackburn-based Pakistani Halima Cassell’s will be on show 1-17th (she’s at Canary Wharf too – August is very much Cassell’s month). 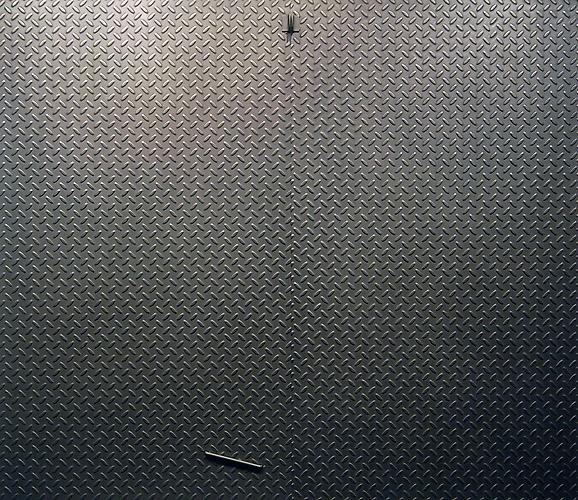 Adam McEwan: Simeon Stylites
Sign of a good thematic group show: I didn’t wonder who (Brice Marden?) was missing, but appreciated what here: painting processes made visible in Richter, Oehlen and Wool, and excitingly close to eclipsed in Agnes Martin; a sarcophagally horizontal Richard Prince car hood; David Hammons’ drawing (made by bouncing a basketball) spectacularly poised on a 300 kg boulder; a rarely seen 1965 Vija Celmins sculpture of her childhood house aflame. And they all provide a chance to muse on the in-between non-colour, grey. Adam McEwen is probably the least-shown this side of the Atlantic (even though he’s British), but his gleaming graphite basement doors are another stand-out. 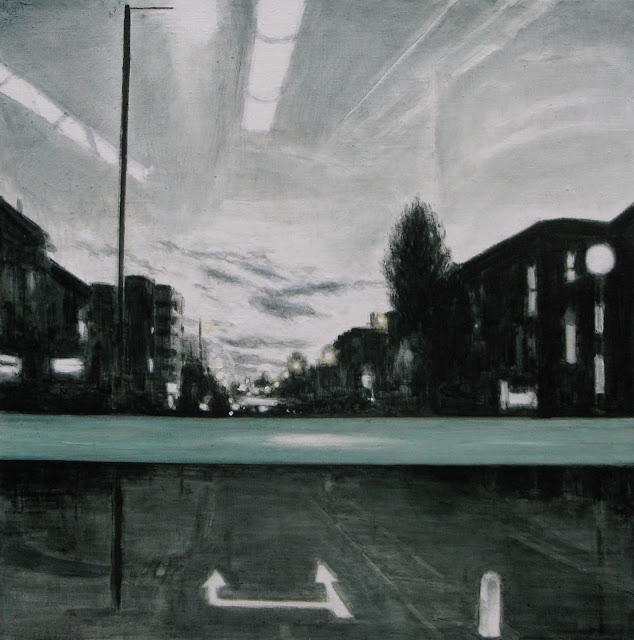 Marguerite Horner’s photo-based near-grisaille landscapes – the latest in a two year festival of 24 painters being shown in this most creative of crypts – have several points of interest: a varied and often radical employment of barriers – trees, grills, telegraph wires, a bus’s interior (as in ‘Forward’) – to disrupt the composition; a 50’s / 60’s atmosphere (emphasised serendipitously by cars squished out of modernity by the computer process of squaring the format); cunning use of colour intrusions, sometimes as minimal as brakelights; and a subtly implied sense of movement, more often of the viewer than of what is seen. The result is a distinctive world, suggestive of psychological unease generated by a constricted past. 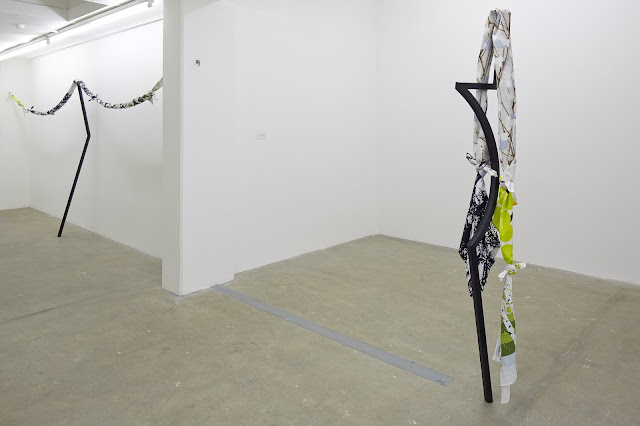 The ‘Art Room’ (Kunstraum) delivers its stated mission of bringing European-based artists to London with this small but richly connected pairing of Stockholm’s Jacob Dahlgren and Rotterdam-based Scot Edward Clydesdale Thomson. The former treats his collection of over 1,000 T-shirts as found abstracts in a video sequence, and has ‘Unit of Measurements’ map out its own installation and dimensions: it consists  of horizontal tape measures, variously unwound. Both the horizontality and the cloth are picked up by Thomson, who uses Finnish textiles with garden patterns to form a self-defining clothes line. The posts are part of his avowed intent of ‘taking over’ the topiary designs of nineteenth century architect Robert Lorimer.
____________

The Instability of the Image @ Paradise Row, 74a Newman St – Fitzrovia 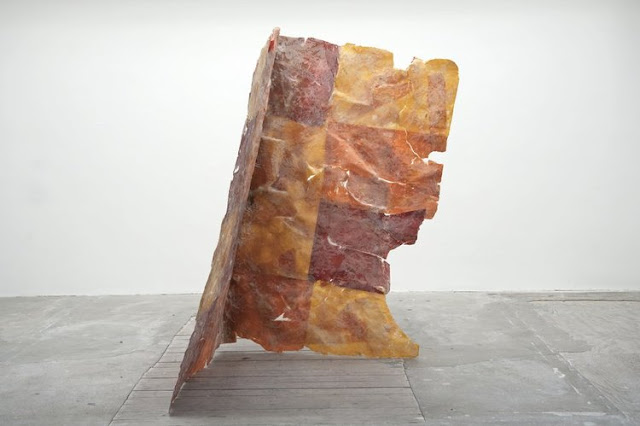 Gabriel Hartley: Screen
The Zabludowitz Collection’s two part survey ‘Painting in the ‘2.5th dimension’ (to 11 Aug) shows how much energy there is among young American painters pushing at the boundaries of sculpture and representation. This eight strong selection from this side of the pond could have been Part 3 – or at least Part 2.5. Here Gabriel Hartley, who’s made an impact here and in the US through highly textured oils which he spacially disrupts with a concluding layer of spraypaint, extends into fully sculptural foam and resin paintings: standing like a corner remnant of wall, or horizontal with found offcuts from the studio turned laid on top, they call to mind John Chamberlain or Fabian Marcaccio as much as, say, Joan Mitchell or Varda Caivano. 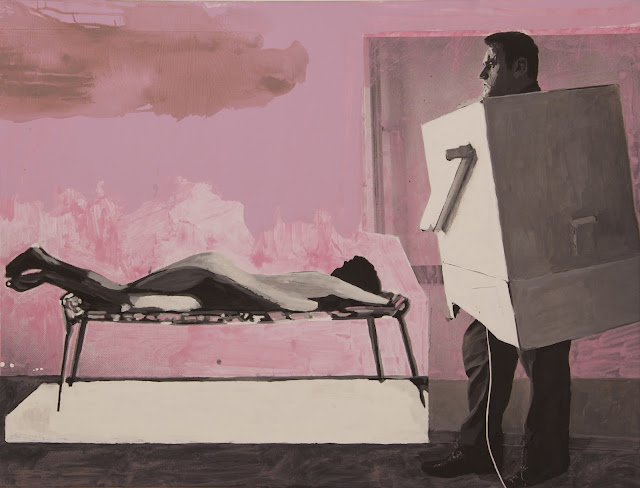 Franz West: Untitled, from the series, Transfigured Past, 2009

Far from a summer throwaway, this is Fred Mann’s best show since he moved west, a collaboration with Kenny Schachter which brings a stellar cast to mostly indirect uses of collage: the keystone is one of Franz West’s last paintings;  Vito Acconci gets suitably naked- sweaty for the current heatwave; Rachel Harrison goes in surprising directions, while Mary Heilmann doesn’t – and it works for them both. The less famed Dan Coombs hand-wafts nudes as he photocopies them as the basis for paintings one step beyond Picasso in arriving at the uncomfortable border between expressive freedom and violent imposition as he reshapes woman to his whim – but aren’t the uncomfortable borders where art ought to be? 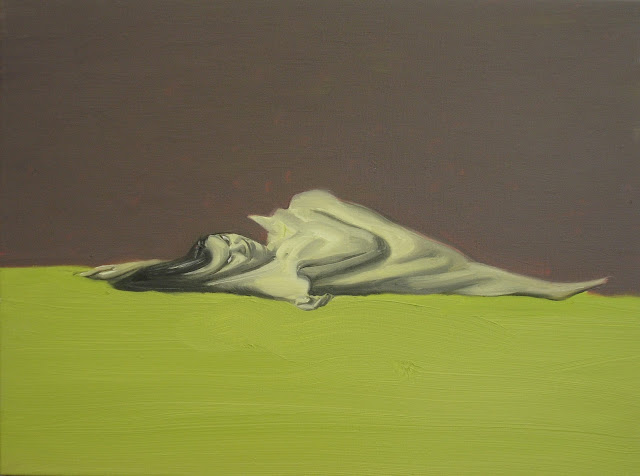