There was a time when the London Art Fair (now in its 30th year) was the glitziest thing in the capital’s art world calendar. That was before Frieze, which sucked up much of the razzmatazz. Now LAF has found its own identity. It is strongest on British Modern Art, as well as having a vibrant project space for newer and more experimental work so that among the good, the bad and the just plain ugly, there are some real gems for the collector.

On entering the fair Art Uk (top photo) is the first stand you come across. Selected as this year’s London Art Fair Museum partner, Kathleen Soriano has invited five leading contemporary artists – Sonia Boyce, Matt Collishaw, Haroon Mirza, Oscar Murillo and Rose Wylie – to each select several 20th and 21st century works from the Art Uk platform. Their choices reflect not only their own passions but the work of the charity, shining a spotlight on the diverse regional collections showcased by artuk.org, whose aim is to log online the work in every UK public art collection. 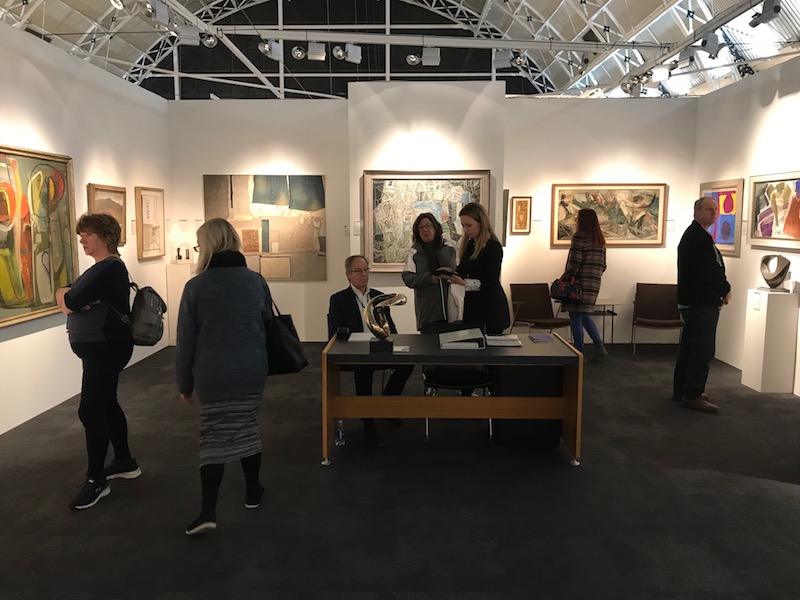 As you wander round the fair, there are still some desirable little Alfred Wallis to be found and a whole wall at the Scottish Gallery of the distinctive abstraction by the late Alan Davie. There are also reliable perennials such as The Glasgow Print Studio. But if you search there are some surprises. Barry Thompson’s paintings at Charlie Smith, for example, are tiny, uncanny landscapes of semi-rural sites set around Dagenham where he grew up as a boy. Their emptiness seems to smell of rites of passage, of drink, spliffs and porno mags. Originally painted in black and white, colour is then added with dextrous precision over the grisaille to create intensely disconcerting little landscapes.

At Maus Contemporary there are some beautiful, restrained works by the Japanese artist Yoshishige Furukama 1921-2008, from the mid-70s when he moved from Japan to New York. The reticent aesthetic of geometric forms on the largely black on white canvases pays homage not only to classical minimalism but, with his use of mixed media such as rubber, to a fascination with materials.

At Art First there’s a selection of classic and new text works by Simon Lewty. One is a beautiful piece based on the 17th-century shorthand, known as Shelton, used both by the diarist Pepys and the Foreign Office. These are shown alongside some strong graphite and oil works on paper by Christopher Cook that take 17th and 18th century still lives as their starting point. These have been subverted to include detritus from the contemporary world such as plastic toy soldiers and helicopters to create both surprising and beautiful works.

Elsewhere the Rabley Gallery is showing some very desirable minimal works that include Japanese woodblock prints by Rebecca Salter and a series of Drawings for Carvings in charcoal by the sculptor Peter Randall Page. Over at Purdy Hicks the Irish artist David Quinn born in 1971, has a wall of intense small works – the size of pages from a notebook – that hover between drawing and sculpture, to share something of the aesthetic of Roger Ackling and Agnes Martin. While Browse and Darby are flagging up the young artist, Olivia Kemp, a graduate of the Wimbledon MA in drawing who is currently completing The Drawing Year at The Prince’s Drawing School. Her meticulous Planted at the Brink, in ink on paper, reflects her interest in those places where the countryside is marked by the evidence and strangeness of human presence. 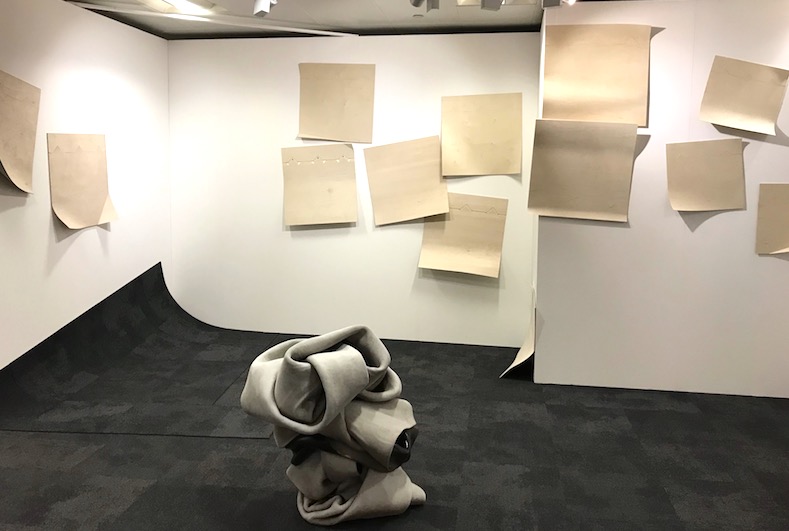 But it is in the upstairs Project Space that the real strength of the fair lies. A feature that over the years has grown to showcase some challenging and interesting work. Chiara Williams Contemporary Art is showing In Times of Brutal Instability by the SOLO Award™ winner 2017, Frances Richardson, selected by the fair’s director Sarah Monk, Robin Klassnik, Director of Matt’s Gallery, and Lisa Le Feuvre, Head of Sculpture Studies at the Henry Moore Institute. The fleeting nature of the fair itself is the starting point to Richardson’s work. As a largely site-specific artist, there was no site for her to visit before the fair opened. Working within the constraints of the booth she has attached sheets of incised 1.3 ml birch-ply to the wall. In the corner, a section of carpet has come adrift and in the front of this is a ‘wrestled’ sinuous knot of concrete canvas that looks like a twist of old carpet, which made me think of Joseph Beuys. But it was when she talked to me about Géricault’s Raft of Medusa that the piece made real sense, and the feeling of physical instability began to resonate. That she has made this work at the time of Brexit and the collapse of Carillon is no coincidence. Across the way, at the Turps Banana stand, there is strong work by Dan Coombs, Damien Hirst and perceptively original figures and portraits by the painter Geraldine Swayne. 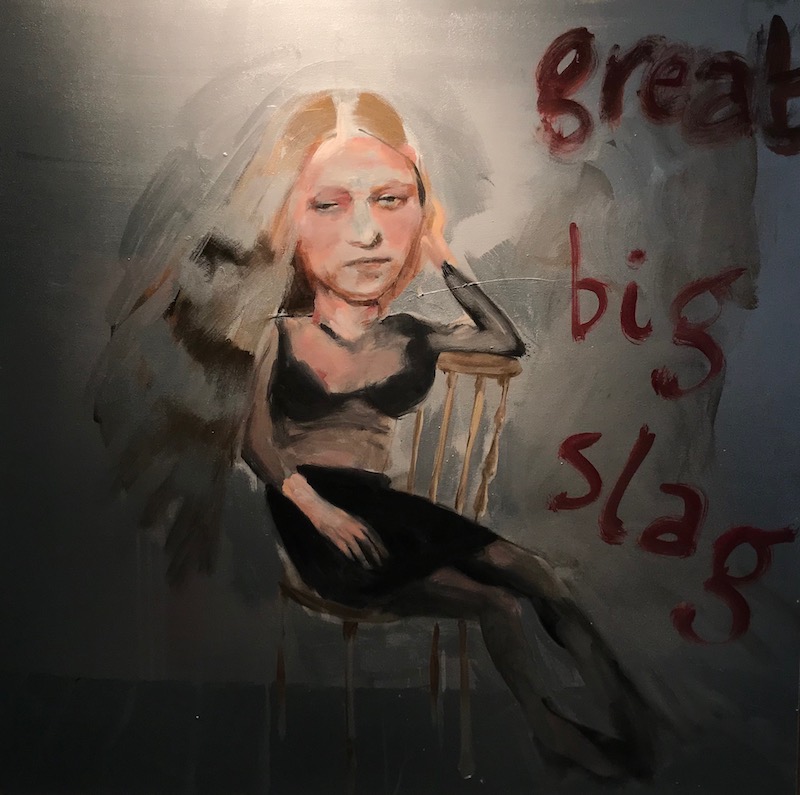 Portraits by the painter Geraldine Swayne on the Turps Banana Stand

In contrast, if what you want is something playful, the Fitzrovia based Woolf gallery is showing a work by Joanne Tinker called Goblets, made of sweet wrappers and twisted into tiny drinking vessels, rowed like precious objects in a museum-style vitrine. While at the Artco Gallery, Marion Boehm, who was born in Germany, has made powerful work in a variety of media that pays homage to the lives, mostly of women, from Kliptown, Soweto. Using recycled sheshwe cloth, newsprint and photographs, she creates poignant portraits that borrow from the iconography of Victorian painting to give a sense of dignity and grandeur to her subjects, as well as making oblique references to colonialism.

From Florence, The Aria Art Gallery is showing Re Vision by Andrea Guastavino, a project born from the recovered archival material by an early 20th-century Florentine photographer. The glass negatives, which were sealed in a box for more than a hundred years have, with time, oxidized. These have been printed using traditional dark room techniques and floated in wax baths. The result is a series of obliquely, semi-erased images that act as metaphors for how memory functions, how events and people are remembered through a glass darkly.

The Art Project space is also home to the screening room where the art journalist and academic Pryle Bherman has curated Quick, Quick, Quick a series of short films and videos of varying quality that investigate notions of brevity, speed and slowness. Islington Art Fair continues to be something of a potpourri. But for those with a developed aesthetic, as well as beginner collectors, time spent carefully looking will yield a number of real delights.

Sue Hubbard is a seasoned art critic having written regularly for the Independant and Time Out. She currently writes for Elephant Magazine and Artlyst. Her new novel Rainsongs has just been released to critical acclaim from Duckworth. Purchase Here