The pandemic has wreaked havoc on the art world. Fairs have been cancelled, galleries closed and artists confined to their studios. The London Art Fair, which was supposed to have taken place in January, finally opened its doors on the 20th of April. The private view was not as crowded as in previous years (perhaps because it has oddly coincided with the Venice Biennale), but there was a sense of relief that it was finally happening at all. Whether it is actually a slimmed-down version of previous fairs, I’m not sure. But there seems to be a new seriousness. More beauty and less frivolity with the lower floor mainly catering to British Modernism – and contemporary work that sits happily beside it – and the upstairs showcasing younger, newer galleries.

there seems to be a new seriousness. More beauty and less frivolity.

On entering the fair, I was delighted to see that this year’s Museum Partner is the wonderful Women’s Art Collection, Europe’s largest collection of art by women that is normally housed in the Brut modernist Murray Edwards College (previously New Hall) in Cambridge. The collection contains some 550 works by such iconic artists as Barbara Hepworth, Cindy Sherman and Faith Ringgold. On display at the fair is a rather strange Maggie Hambling, Hebe and her Serpent, 1979, a vibrant Eileen Cooper of two flagrant dancing women, Perpetual Spring, 2016 and an interesting early Tracey Emin (interesting because she is not the subject), a coloured lithograph from 1986, entitled Sixty A Day Woman based on a character met in Margate who reputedly smoked 6o cigarettes a day.

At Purdy Hicks, I discovered a couple of floral archival pigment prints by Kathrin Linkersdorff. The transparent Les Fleurs du Mal beauty has a sense of entropy about it. At Rebecca Hossack, best known for showing aboriginal art, there’s an abstract version of the Thames – part map, part abstract painting – by Barbara McFalane, London Cobalt, Teal and Emerald that, despite her Scottish name, shows the influence of aboriginal art in its mark-making. The Zuleika Gallery has a whole stand dedicated to the elegant minimal works on paper and sculptures by Nigel Hall, while Advanced Graphics has a delightful little Craigie Aitchison print, Crucifixion with Dog 2003, created in his bold colours and naïve style. There are Winifred Nicholsons, Sickerts and Prunella Cloughs to be had, and some real delights among the plethora of the mediocre. One gem was an early painting by my late friend Gillian Ayres. An uncharacteristically small work dated 1957, painted in ripolin on a small vertical strip of board in her early tachist style. 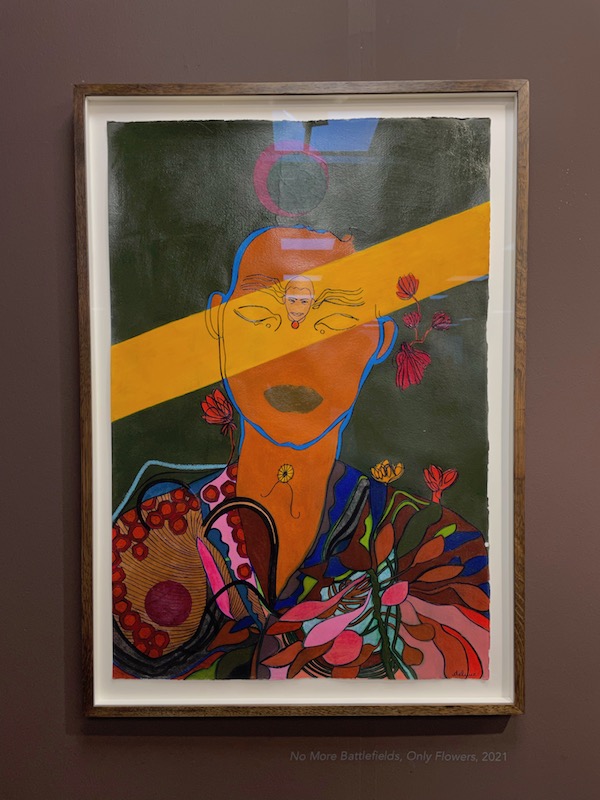 But it’s the upper floor that gives the fair its pizzazz. Now in its 17th year, Art Projects brings together international ventures – curated solo shows and group exhibitions. Domobaal has a fascinating series of unique photographic transfers on lime logs by Alice Wilson depicting woods, paths through forests, anonymous sheds and warehouses, alongside some equally enigmatic oil on wood works by Fiona Finnegan, including When the Levee Breaks, 2020, a black feathery eruption set against what might be a rosy sunset. Over at Ed Cross Fine Art, Tiffanie Delune uses warm colours to create exotic, playful images that depict her roots and family memories, while MADEINBRITALY artists have been fashioning their own ‘Hortus Conclusus,’ ‘an enclosed garden’ that functions as a space in which to ferment new ideas. At IMT Gallery, collaboration is the name of the game. Works by Paola Ciarska, Frankie Robers and Orphan Drift (Ranu Mukerjee and Maggie Roberts) are housed within a scaffolding structure that functions as a physical metaphor for the collaboration required to stage an exhibition.

Topical issues, especially Brexit, followed by the Covid pandemic, along with the global climate emergency, have informed Rodrigo Orrantia’s curatorship of Photo50. The first work encountered is that of a small sailboat with dark sails, which appears to be heading to the shores of some utopian paradise. This forms part of a powerful installation, Journey, by Esther Teichmann and is set alongside Alexander Mourant’s mesmeric A Vertio Like Self, made, originally, as a Super 8 film of a silent voyage by sea out to an island.

The second aspect of the exhibition, following on from the theme of water as a liminal space, focuses on Borders. These can be interpreted as both geographical limits and the space between the flat world of photography and the three-dimensionality of the sculptural object.

In its fourth edition, Platform, curated by Candida Stevens, presents 10 galleries whose artists have created new work that explores the intersection between the visual and music. There’s work, here, that makes reference to the improvisations of jazz, with its destabilised, off-kilter imagery, along with that by figurative artists who represent the process of composition, both in musical and visual forms.

Alongside all these different elements, the fair is presenting a series of talks that range from Artistate: Art, Death & Legacy: Managing Artist Estates in the 21st Century, to what promises to be an interesting panel discussion on The Women’s Art Collection at Murray Edwards College – A ‘Feminist’ Curatorial Model’.

The London Art Fair may not have quite the international fizz of, say, Frieze, but it has, over the years, settled into its own format. One displaying works by well-known names, alongside a healthy display of new and experimental work.

Sue Hubbard is an award-winning poet, novelist and freelance art critic. Her novel Rainsongs is published by Duckworth. Her fourth poetry collection Swimming to Albania is available from www.salmonpoetry.com. Her novel on the life of the artist Paula Modersoh Becker, Girl in White, will be reissued later this year by Puskin Press, who will also publish her fourth novel next year. www.suehubbard.com