Reviewer at large Paul Carey- Kent has been out and about in London choosing a selection of exhibitions which defy the obvious and turn up some interesting insight into what actually is happening in the better known galleries as well as some of the nooks and crannies in our great metropolis. 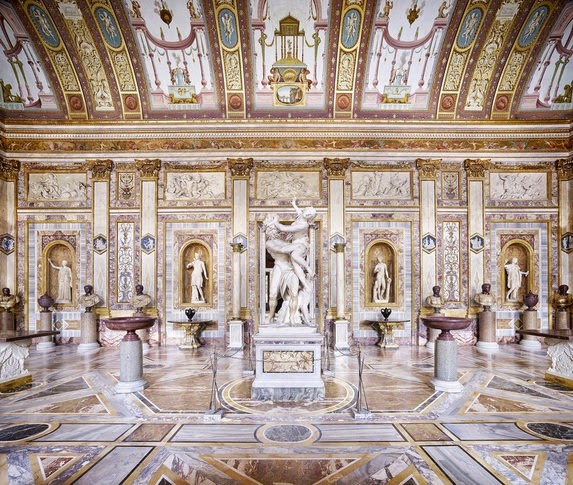 Candida Höfer’s Villa Borghese series is typical of her intimately monumental, formally similar records of culturally significant public interiors: she uses natural light only (Höfer adjusts her exposure time from minutes to hours as necessary), includes no people (though this set is statue-heavy by way of stand-in), centres the far wall from a slightly raised viewpoint, and generates an air of splendour and permanence. Indeed, despite the lack of digital intervention, you might say that Höfer  presents such spaces more as we might imagine them to be than as they would be likely to appear to us, were we there.
_____________________

Samara Scott describes her practice as a ‘slow digestion of cosmetic, edible and chemical cultural bedris’. That turns out to be largely a means of trapping the fluorescently pastel-coloured experiences of a synthetically freed body. The key development in her language here are resinous horizontal paintings – come sculptural accumulations – come low tables – come flatbed scanners, raised on various props. Add a toothpaste drawing on the wall, rolls of sellotape inserted into textile, and a multi-hued painting featuring the gussets from tights, and plenty else, and you have one of five good reasons to visit Anita Z’s summer shows, the other highlights being a persuasive selection of Sam Falls’ paintings, sculpture and less often seen videos; and a rebooted version of Rachel Pimm’s excellent show from Enclave in April. 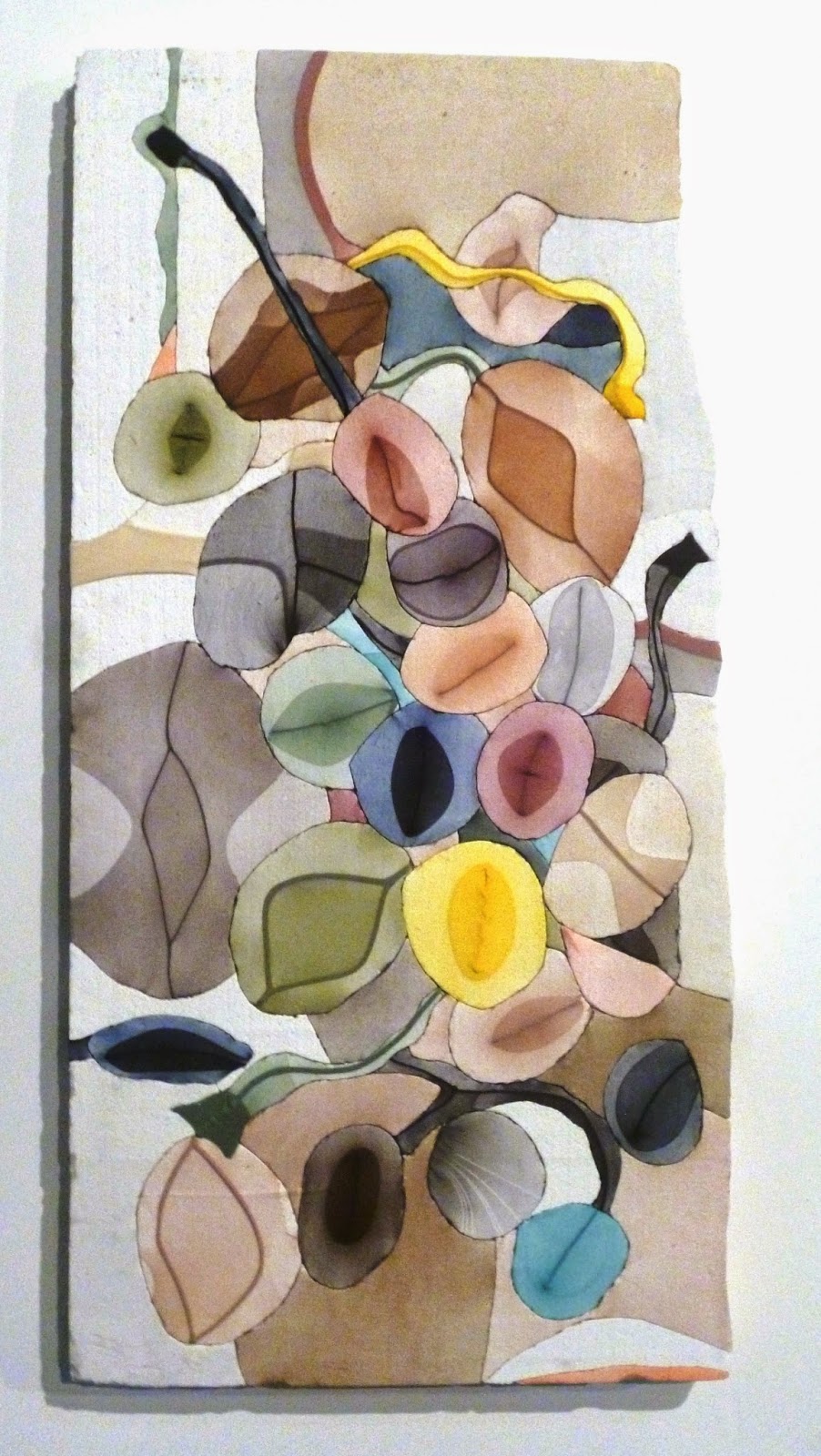 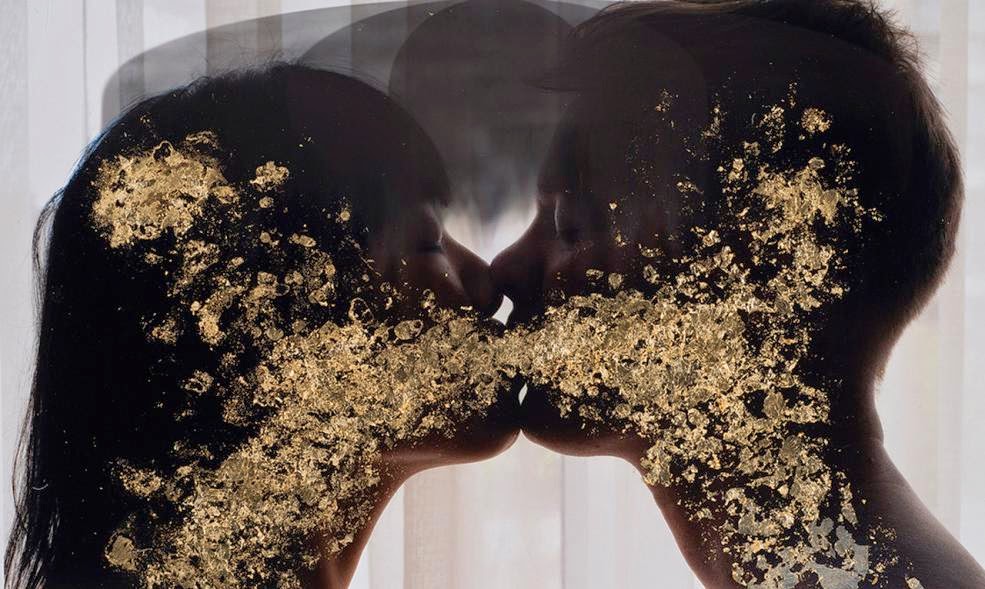 Sarah Anne Johnson: Kissing Gold, 2013
It would be illogical not to recommend my own show! It starts from the found and the collaged as dominant modern modes, and looks at how six artists combine materials in sculpture, video, painting, photography and mergers thereof, to reflect on how we live together. Moreover, the show is itself a combination of Canadians – Sarah Anne Johnson and Wil Murray – and Britons – Susan Collis, Appau Junior Boakye-Yiadom, Suzanne Moxhay and Catherine Herbert. Sarah, who flew in from Winnipeg for the opening, has installed 34 photographs from her Wonderlust series. She travelled throughout Canada to find people willing (but not too willing!) to be photographed in their homes during intimate moments which she then altered to enhance a refreshing variety of moods from tender to comedic to absurd. 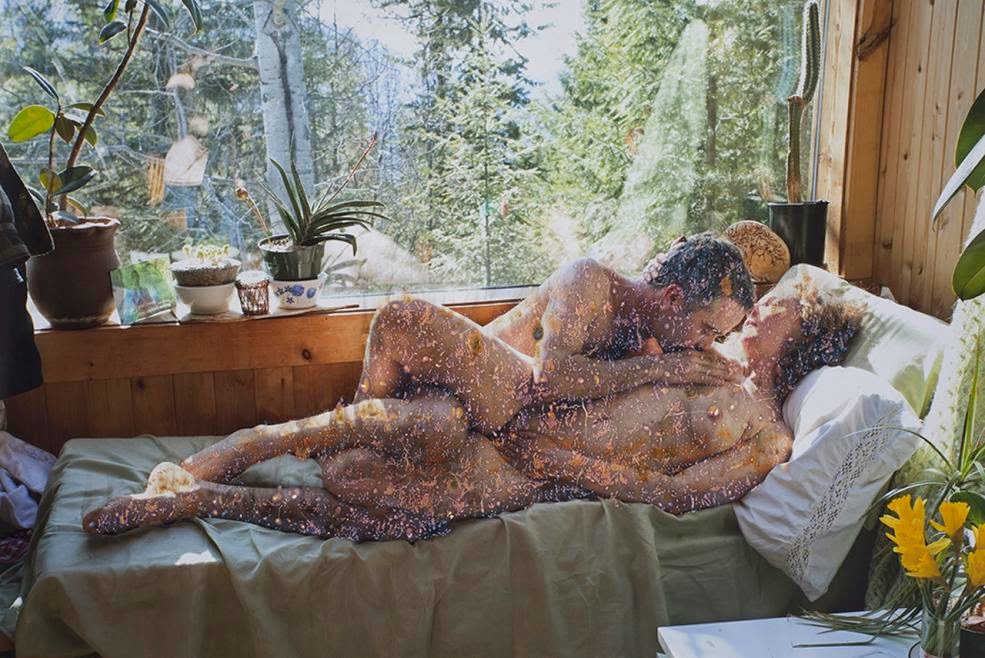 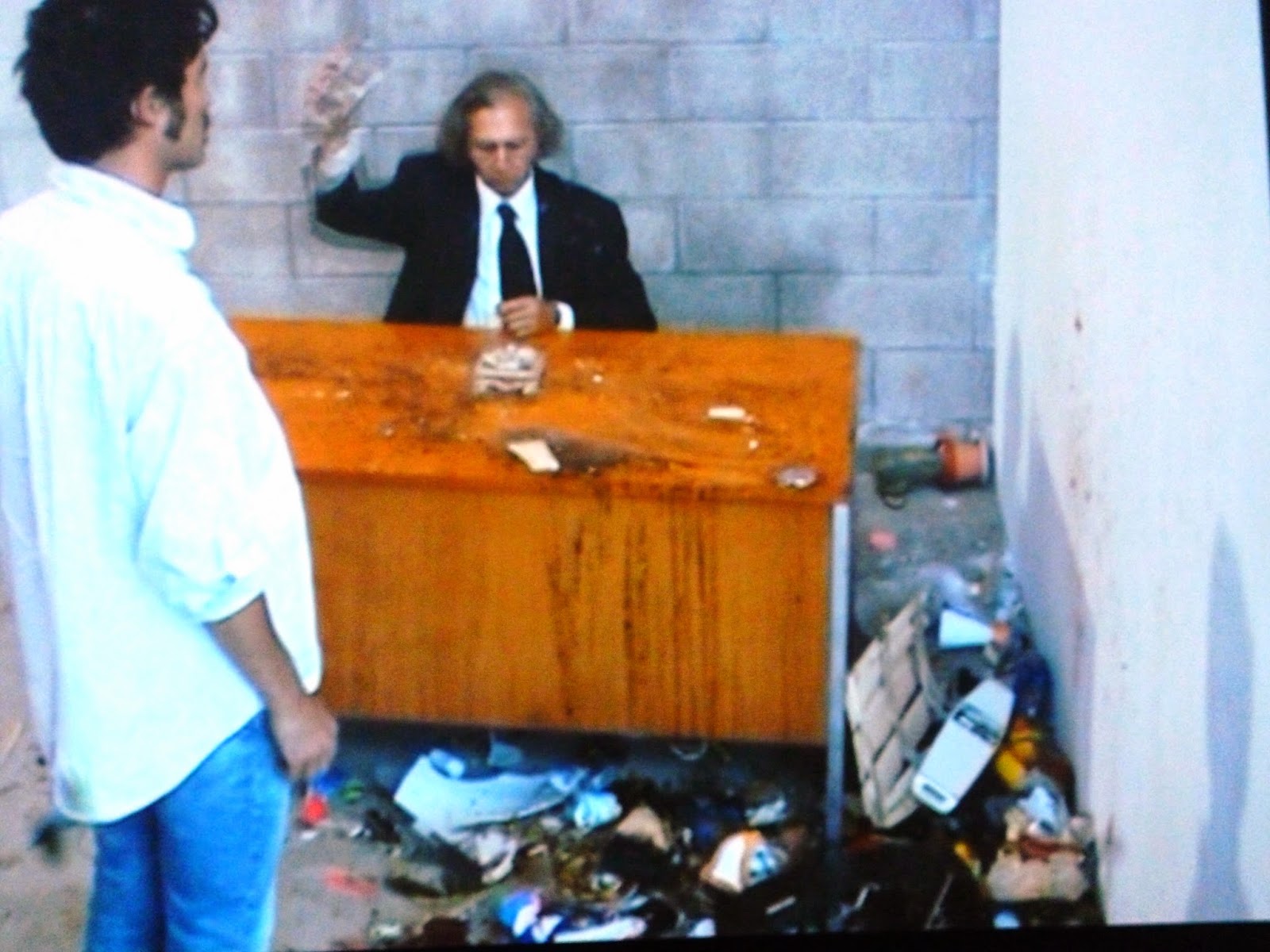 Some works lure you into a repetitive logic to compelling effect. I found myself repeatedly watching ‘just one more’ object get dispatched in Jimmie Durham’s 90 minute video of bureaucratic smashing . Durham, in a suit, sits at a desk. Assistants hand him a stream of items, each of which he pounds impassively with a prehistoric rock, whether with one blow or with mechanical persistence (he comes down 30 times on an alarm clock). Then he stamps and signs a certificate, and puts away the pen, ink pad and die we know he’ll need again in a minute. That’s upstairs: below, the Berlin-based Cherokee’s colourful installation of oil drums, pipes and spills proposes a compelling, if simple, echo of destruction. 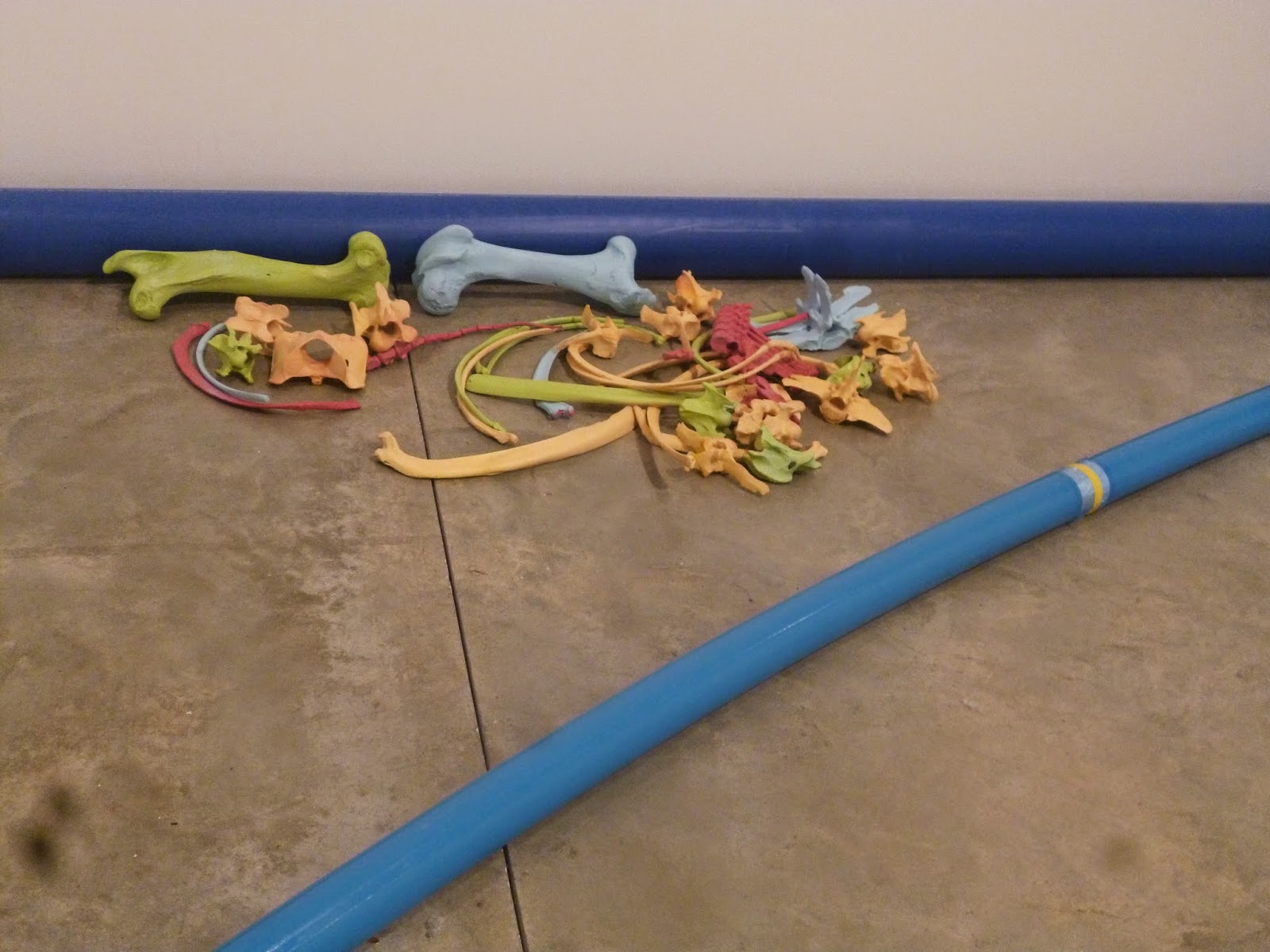 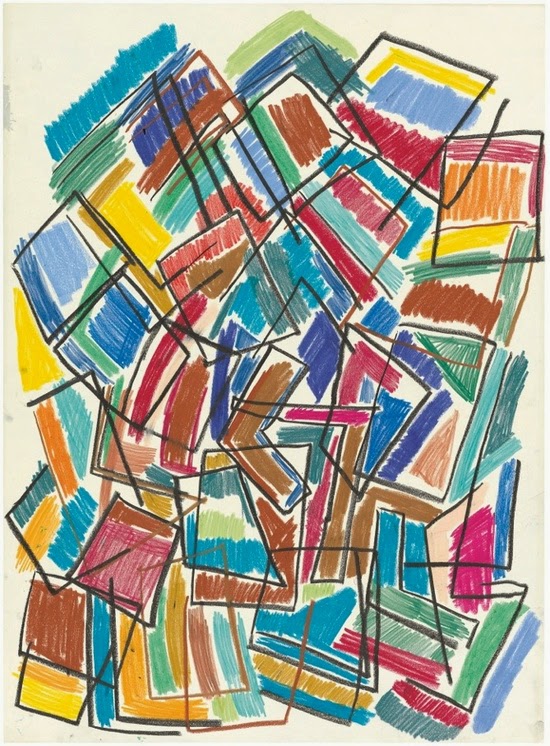 Filling a run of large galleries with 500 or so drawings culled from the archive of a sculptor may not sound the most stimulating prospect, yet this feels far more than a supplement to Phyllida’s Barlow’s feisty occupation of Tate Britain.  She has a four stage process: (1) initial idea sketches (2) worked up ‘drawings’, which are typically paintings full of colour (3) sculptural forms (4) combination / reuse of those forms. Here we have stage 2: given the historically temporary nature of most of Barlow’s stage 4 production, as close as we’ll get to a full retrospective – an energising demonstration of sculptural  thinking with more ideas for painting than the average dauber could shake a brush at… 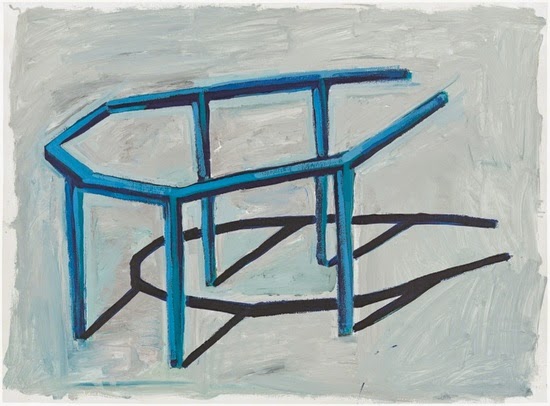 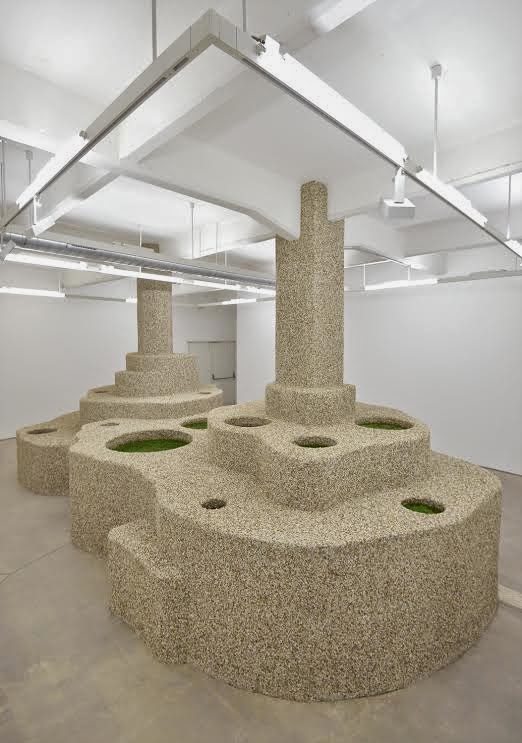 Hales’ space has two highly intrusive distinctive central columns. Far from worrying about sightlines, London-based New Yorker Rachael Champion uses them as the starting point for a modularly irregular, organically geometric set of shapes – half-building, half-landscape – which subsube the gallery in a combination of pebbledash (publicly derided by many, but secretly loved equally?), water, and the basic life form of algae (cleared from garden ponds, but an important source of oxygen, a super-food and a putative fuel)…  The result is a striking multi-ponded suburban takeover of Shoreditch’s cool which may speak, as the show’s blurb has it, of our ‘ever-mounting Anthropocene crises’.
_____________________
Sean Scully: Kind of Red @ Timothy Taylor Gallery, 15 Carlos Place – Mayfair
To 12 July: www.timothytaylorgallery.com
NB possible related trip =  Sean Scully Encounters: A New Master Among Old Masters – Christ Church Picture Gallery, Oxford – to 31 Aug 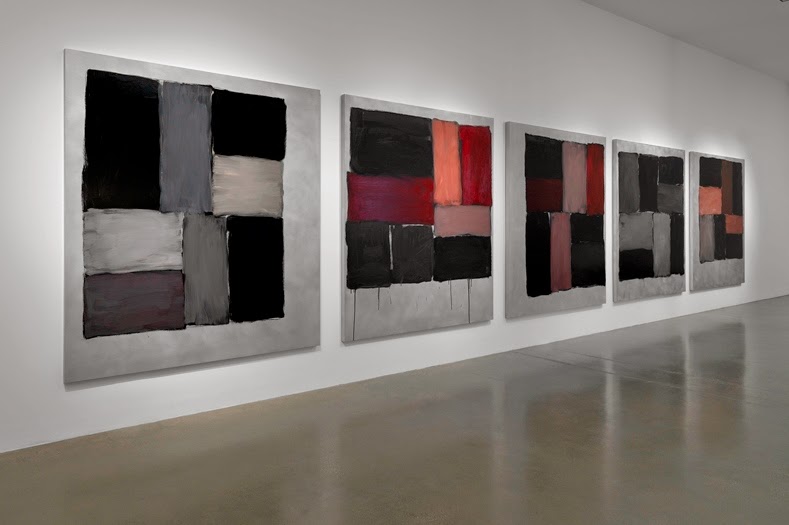 It’s easy to fall for the solid luminosity of Sean Scully’s paintings; nor is it hard to find they evolve rather slowly.  Here, though, in his first London solo since 2010, Scully eases into the full horizontal stripes (or ‘landline’) for a change, and where he employs his more characteristic city-inspired broken stripes, does so with some differences: the lushness is looser; and though he’s painted on aluminium and cited musical influences before, his exposure of more surrounding metal than previously adds to the sense that these could be end-on views of Scully’s own sculptures, and exploits the optical illusion whereby the aluminium appears to vary in colour depending on the colours from under which it’s glimpsed. All of which suits the improvisational jazz aesthetic of the vast quiptych ‘Kind of Red’.

The Deferred Promise of Complete Satisfaction, 2014 – oil on linen

New Yorker Will Cotton’s first British show neatly summarises his practice in the pinks and whites of a macaron-hatted portrait; a candy floss cloudscape;  an abstracted wax-textured close-up of cake decor; and a photorealistic nude riding an ice cream fish. Koons, Johns and Boucher come to mind, and there are painterly issues at stake in, for example, the variety of colours in the whites. The dominant impression, though, is of sweetness pushed to an extreme which is both repulsive and compulsive, setting up the questions of which wins – of whether humankind is trapped by incessant desire or blessed by the gratification available – and of whether Cotton subverts or exploits the lure of what he so elaborately bakes and paints.

From ‘False Memory Archive Erased UFOs’:  collection of found UFO images with all evidence of the UFOs removed, presented in 242 used frames, 2012-13.

Alistair Hopwood occupies both Carroll / Fletcher’s new project space (in what was the Nettie Horn gallery) and the rather appropriate Freud Museum for an extensive exploration of false memory with many fascinating examples. Perhaps you think you’ve seen it already, but why not go again? Not least of the pleasures is a wall of  found photographs, fitted to found frames, from which the supposed evidence of UFOs has been removed. Often, Hopwood told me, the removal was of what had anyway been a mere photoshop addition. Imagine generating a false memory of a UFO sighting from forgetting that you yourself had doctored a photograph to include one…
_____________________
Trujillo Paumier: Men y Men @ New Art Projects, 17 Riding House St – Fitzrovia
To 20 July: www.newartprojects.com 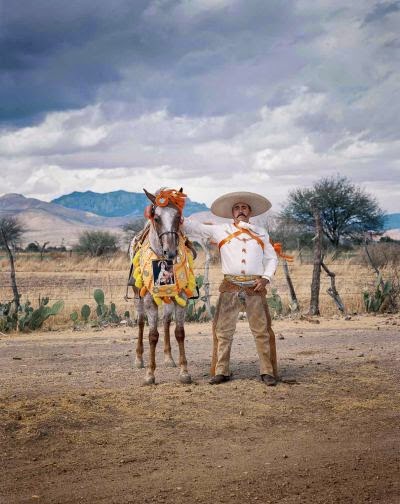 This unusual show by photographer-partners sees them working separately to contrast two distinctive but visibly Catholic communities in the Mexican town of Oxaca: American Brian Paumier’s Moros – portraits of cowboys and their steeds – are shown opposite Mexican Joaquin Trujillo’s trans-gender Muxes. The Moros and Muxes get on well, though, as indicated by a table of inter-mixed images presented in ex votos style, making this a celebration of difference. There’s also a film of the cowboys, lyrically shot from a helicopter as they parade their horses in an annual festival of thanksgiving, complete with the colour-bursts of traditional family ribbons. 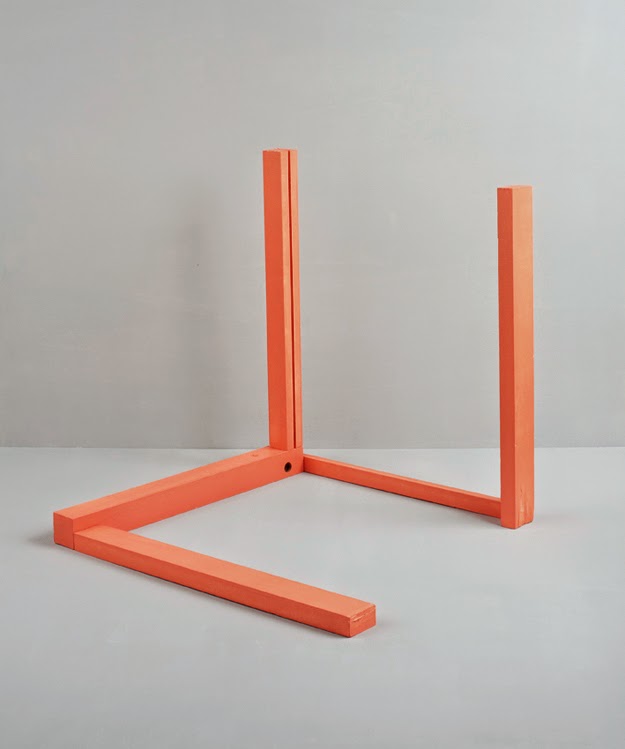 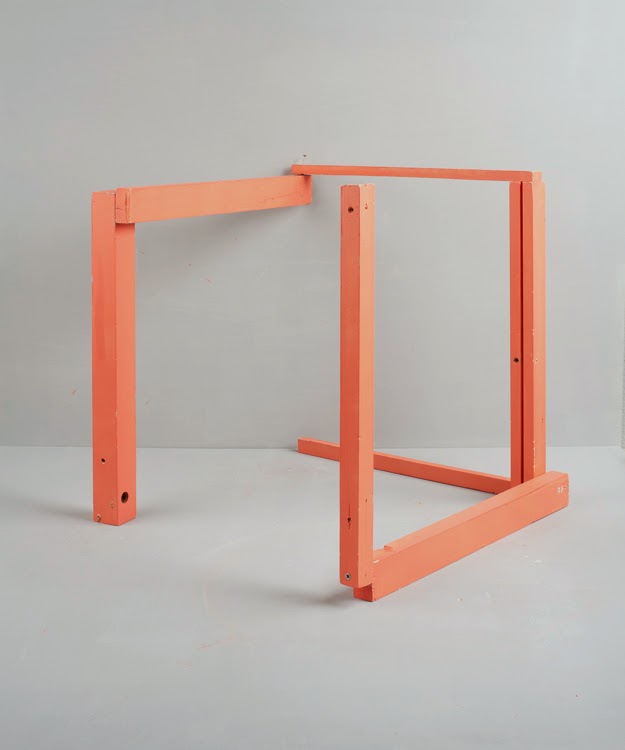 The third  show in Camilla Grimaldi’s new space brings together four female photographers with structures on their minds: Heidi Specker, Clare Strand, Faye Heller and the young Dutch artist Fleur van Dodewaard, who shows prints from her fascinating set of 131 variations on Sol Lewitt’s 122 Variations of Open Cubes. Lewitt planned a systematic exploration of all the possible forms of open-sided cubes, with 1-9 of the 12 sides which would constitute a full cube missing so that the viewer can imagine the completion. Van Dodewaard uses a fleshy pink, so hinting at the body – indeed, she’s titled a comparable series of geometric constructions ‘Nudes’. She also provides an enlivening sense of the project’s contingencies: there are accidental duplications of structures, gaps where she failed to replicate one of Lewitt’s arrangements, some forms which she couldn’t match to his originals…
_________________________
Pangaea: New Art From Africa and Latin America @ the Saatchi Gallery – Sloan Square 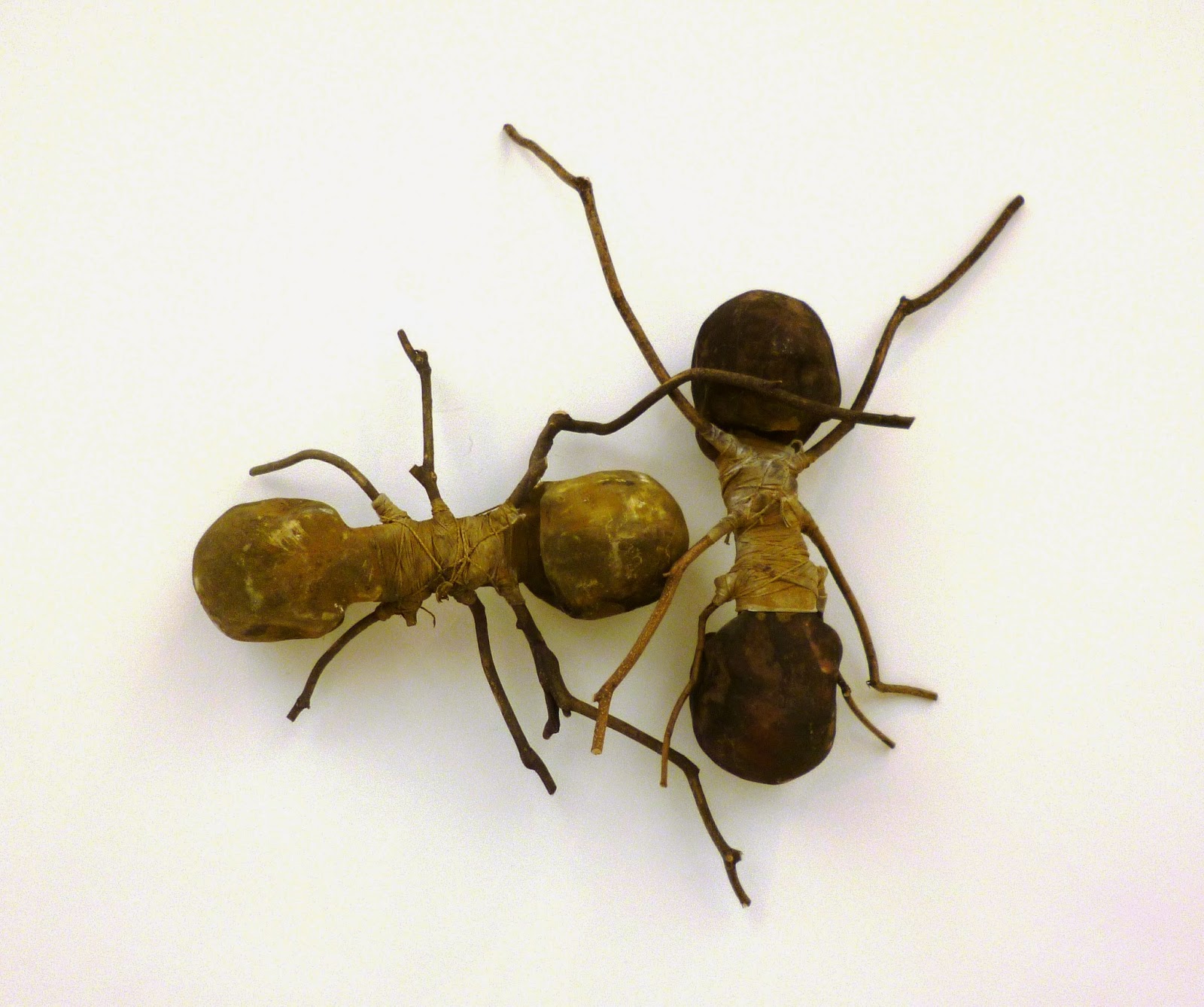 Rafael Gómezbarros:  ‘Casa Tomada’ (Seized House)
There are plenty of big shows which it hardly seems necessary to mention: such brilliance as  Matisse at the Tate Modern; Veronese, all theatre and colour at the National Gallery, any lack of depth well-aligned to modern tastes – or at any rate to mine; Phyllida Barlow in ramshackle glory at Tate Britain; and Giuseppe Penone at Gagosian. And the less convincing: Schnabel at The Dairy, for example, or Herman Bas’s two sites for Victoria Miro. Then there are mixtures like Chris Marker at the Whitechapel, and Saatchi’s new ragbag of South America and Africa… if you’ve never been to the excellent Jack Bell Gallery, there’s a crash course here as three rooms are given over entirely to expanded versions of four of the African explorer’s lively shows. Still, Pangaea’s signature room is its first: Rafael Gómezbarros’ 440 giant ants swarm the walls, each made of two cast human skulls with branches for legs, and held together by dirty bandaging.