What would you sooner, solo show or group? This month I feature three solos varied enough to look like groups, tightly-themed and more disparate group shows and a solo (or is it?) with multiple guests…  not to mention an artist with three substantial London shows at once – would that be a group solo? And even though I’ve included forteen, there are plenty of other high quality shows on now or up soon: Bernard Jacobson, The Barbican, Pyms Gallery, Paradise Row, the Approach, Maria Stenfors, Spruth Magers, Hauser & Wirth, Piper, The Composing Rooms, Bischoff/Weiss, Osborne Samuel, Cubbitt and Purdy Hicks were among those who tempted me, too – along with the new Saatchi show reviewed separately.  Unusually, I start with a few artists who are no longer of this art world…
.
Paule Vézelay: Abstraction-Création and Le Groupe Espace

It’s good to see that Jane England has moved her gallery from Notting Hill into the thick of the Fitrovian action – and equally good to see her put on a wide-ranging 30-item show of Marjorie Watson-Williams (or Paule Vézelay as she styled herself on moving to Paris in the 1930’s, more appropriately to her continentally surreal tendencies). These included two of her rather rarely-seen thread and wire in box constructions of ‘Lines in Space’, which bring an original poise to the apparent influences of her lover (from 1929-32) André Masson and friend Hans Arp.

Richard Hamilton: The Late Works @ The National Gallery
To 13 Jan: www.nationalgallery.org.uk
Setting aside a still-clunky unfinished triptych, Richard Hamilton’s late paintings are eerily crystalline meditations on pictorial artifice which might be summarised as ‘the Duchampian Bride in various computerised interiors’. Like Duchamp’s posthumously-revealed ‘Etant Donnés’, they make the male artist’s desire for beauty take a somewhat uncomfortable centre stage as nude women do the housework, wander round the National Gallery, or pass directly before the bachelors, as here.  I take this to be a double provocation: a use of the classical tradition guaranteed to have Brian Sewell types foaming at the mouth, while at the same time rubbing up against political incorrectness in more progressive circles.
Nicholson / Hepworth / Moore and Sir Alfred Munnings: An Artist’s Life &  @ Richard Green, 33 & 147 New Bond St – Mayfair

The Richard Green galleries either side of New Bond Street are well worth visiting before Christmas. On the eastern side is a representative and high quality selection of Nicholson, Moore and Hepworth, including a couple of 1930s geometric gouaches from Nicholson which blaze more brightly than his contemporaneous oils. On the west is an extensive survey of Alfred Munnings (1878-1959), often seen as the best painter of horses since Stubbs – Brian Sewell is a fan –  yet also dismissed as reactionary and formulaic. I’d say there’s a dash of radicalism and plenty of flair in, for instance. what might have been routine commissioned portraits of rich Americans on horseback. Witness the energy of the dogs and flushed sky-echoing flanks of the horse above.

This is four shows in one, and they’re all good! ‘The Line of Beauty’ itself is what he German artist is known for: a space-sensitive colour-geometric wall painting covering a special room; the guests – in the adjoining room – are artists associated with or admired by Götz, whose works are shown alongside objects from his personal collection of ceramics; aspects of those 14 guest items are echoed in 14 drawings hung against The Line of Beauty, allowing for a diverting game of match-across. Enough? No, the larger room also contains Götz’s new stream of stand-alone paintings – five shimmering accumulations of line, the secret of which is the layers of metallic pencil beneath the paint. 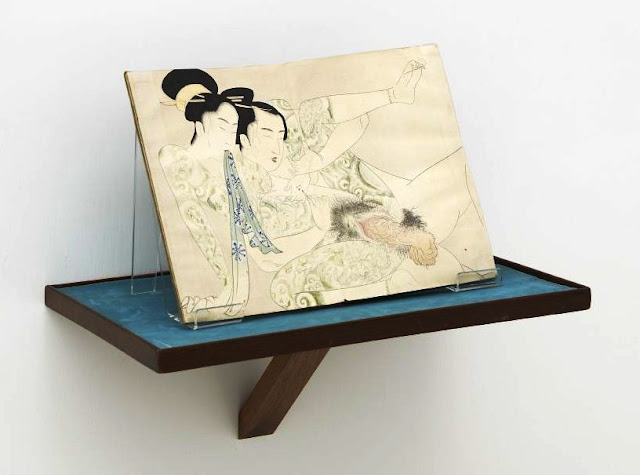 This installation is a chance to enter the decidedly gothic brain of Mexican artist Dr Lakra, best known for tattoo-inspired work which plays up to his drug dealerish name (literally ‘Doctor Scar’, a nickname from Jeronimo Lopez Ramirez’s habit of carrying a medical case). So: weird record covers, found scrapbooks of medical diagrams, sexual kitsch and sculptural primitivism; box-framed collections of consonant ephemera; silhouettes of grotesque characters; a giant wall-painted osprey and fish. Nonetheless, the star item is surely the closest to his core work: an Japanese Shuga book to which Dr L has added hyper-delicate tattoos. 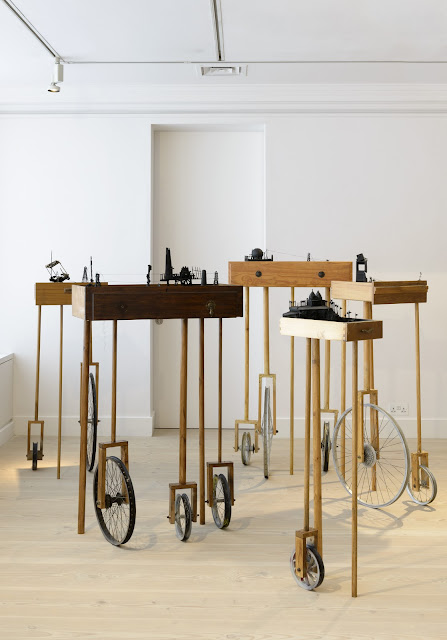 Saad Qureshi: Other Crescents Other Moons @ The Gazelli Art House, 39 Dover St – Central
To 22 Dec: www.gazelliarthouse.com
Adventurous British Asian artist Saad Qureshi has found a way to merge collective memory with his own personal vision. He bases the look and feel of the landscapes in his first solo show on verbal recollections obtained by advertising in places he visits – as if he can inhabit them as a local. These translate into filigree carvings on carbon paper, hung at an angle from the wall so that the back can be seen as a memory-trace of the front; brooding half-burnt, half-painted landscape tableaux, set in cupboardless drawers mounted on a spookily illogical mixture of wheels and legs; and thelarge title  installation, which has a more communal aspect.
Keith Coventry: Junk Paintings : Pace, 6-10 Lexington Street – Soho
To 21 Dec: www.pacegallery.com
Keith Coventry (who has solo shows at both Pace, as here, and Peer and a substantal presence at David Roberts) collects McDonalds packaging to inform his decade-long series of paintings which blows them up to a scale to dwarf the biggest burger. The latest set have almost coalesced with his well-known estate paintings (which turn reveal the supremacism in housing maps), so abstract have they become.  Look closely and you’ll see that the white areas aren’t painted constructivistly flat but with very evident geometric brushstrokes, recalling his other well-known stream of white on white paintings. …

This is primarily ‘as you were’ for the German artist: small, intense paintings which channel the temptation to strive for the spiritual through abstraction, yet but bring that up against the material reality from which they are very visibly made. There’s also a harder-edged influence from 20th century religious architecture, which Ribbeck calls ‘bastard hybrids of modern rationalism and the spiritual role these buildings were meant to play’. Yet the one main technical difference from his first London solo show in 2009 has more aesthetic impact than you might guess:  ‘pigmented marker’ – felt tip of some sort – has replaced the previously characteristic use of ballpoint pen in building up the scumbled, scratched and smeared surfaces which animate Ribbeck’s geometry.

To 20 Dec: www.artfirst.co.uk
South African Louis Maqhubela has been London-based since 1978, but these recent paintings integrate his homeland with an evident love of Klee and Kandinsky as they flicker back and forth between abstraction and representation. ‘Galactic Parade’ sets three bad men against two good figures who have freed the bird to fly towards the moon as ideal triangle… but what hits you first is how abstractly patterned these figures are – that and how the paint, applied on a rollered white ground over enough years to build up an unusually rough texture, achieves a burning luminosity. 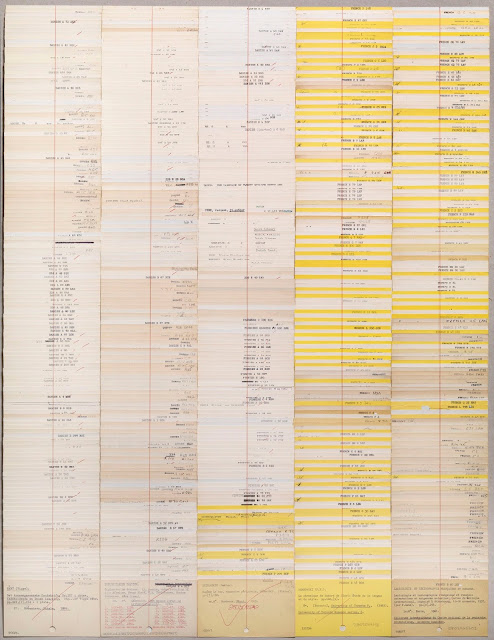 text(ure) @ Patrick Heide Contemporary Art, 11 Church St – Marylebone
To 22 Dec:  www.patrickheide.com
This intricate show explores the space in which texts go beyond simple legibility to become line and pattern. Its all good, expectedly so with Carl Andre, Alighiero Boetti, Károly Keserü and Michael Landy, but the stand-out piece is Katherine Murphy’s performative path to beauty through inordinate labour and systematised chance:  she salvaged 3,000 UCLA library index cards from a skip and has set about arranging them in different formations. The geographical sort recorded here across four panels combines some analogue wistfulness and mental travel with an accidental Agnes Martin look titivated by the cards’ differential typefaces, colour bands, dirt from being handled and cancellation marks.

Mel Bochner: If The Colour Changes @ the Whitechapel Gallery – Aldgate East
To 30 Dec: www.whitechapelgallery.org
There are plenty more words in Mel Bochner’s compellingly repulsive Thesaurus paintings, the culmination of a 40 year investigation of the relationships between medium (‘delivery mode’ in Bochner-speak), language and colour – and yet one which Bochner himself reduces to Blah Blah Blah in the biggest and dirtiest work on show.  There’s plenty more escalating negativity – ‘No Way’ moves on to ‘Never’ and ‘Drop Dead’ – contrasted with an almost pathologically cheerful palette  as Bochner rails against the limits and conditions of painting, language and the world – rather like  doomsayer relishing having  been right. The (sarcastically?) upbeat ‘Amazing’ has bands of colour as well as coloured letters to maximise the dose. 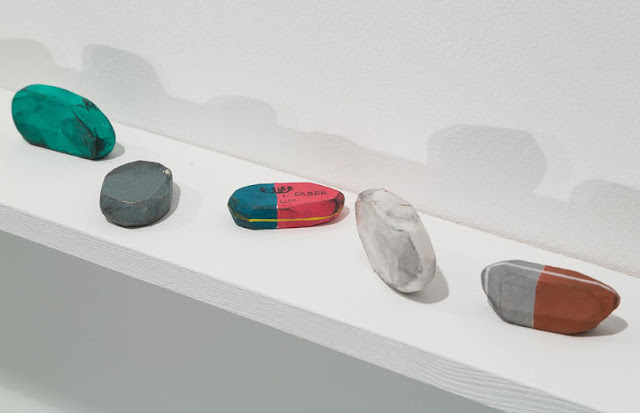 David Adamo’s most consistent stream of a practice typically themed around removal – of material and / or functionality – sees him chop away at wooden objects until what they were is in visible tension with what they have become. The latest phase is here, but this hugely inventive show spread across three floors has much more: erasers made from clay which were then used to attempt a rubbing out, so shaping the clay appropriately; a shuttlecock made functionless through an amazingly filigree rendition in bronze; silent metronomes; an equally useless wooden bicycle frame; miniaturised radiators; and tiny wooden birds cute enough (sorry!) to tread on by mistake.

Tim Davies: In and Amongst @ the FOLD Gallery, 15 Clerkenwell Close – Clerkenwell
To 22 Dec: www.foldgallery.com
FOLD latest show in its spacious new Clerkenwell location, another very varied solo with removal at its heart, surveys Tim Davies’ work both before and after he represented Wales at the last Venice Biennale . Erasure succeeds here in the removal of the background from postcards of bridges to leave the crossings abstracted and purposeless. Other disruptors include fire, fear and trembling: burnt boards from an elaborate performance using scattered nails as a template; videos of psychologically charged movement through buildings; a hand rippling architectural reflections in the Grand Canal; and the deconstruction of more modern buildings to quake-like effect by selectively rotating collaged elements. 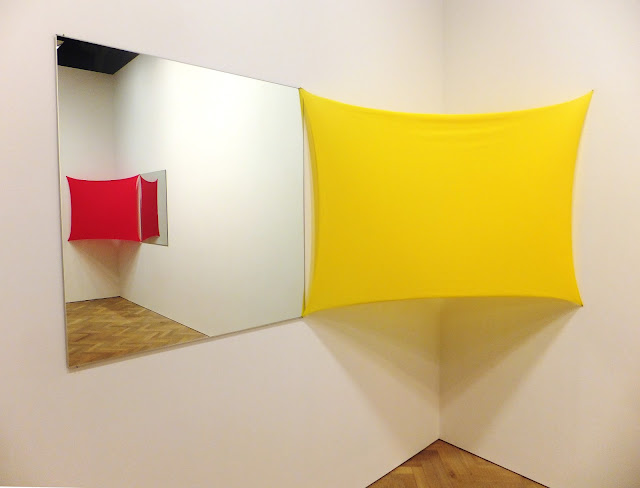 Jean-Luc Moulene @ the Thomas Dane Gallery, 3 &11 Duke St – Central
To 26 Jan: www.thomasdane.com
As I write you can (and I have!) see significant shows by Jean-Luc Moulene in London, Oxford and New York. They all show him expanding from his photographic base in any number of interesting and diverse directions, most often united, perhaps, by themes of how geometry relates to the body. Thomas Dane has the rememakable feat of glass-blowing which makes up triple-coloured mathematically-based ‘knots’; glass lungs in bird cages; square mirrors aligned with squares of lycra put under sufficient stress to appear quite other; exploations of the geometry of clocks; monochromes in biro; a neat-as-simple collage of eye and finger etc etc.
Another Room @ ROOM London, 30 Manchester St – Baker Street
To 9 Dec: www.roomartspace.co.uk
Close to the long-standing and respected photography gallery Atlas (which is currently showing a broader-than-you-usually-see range of Floris Neususs’s photograms), the East End’s ROOM has moved into a whole Georgian house in the West End – albeit for a one year let of a partly burnt-out property which retains plenty of East End grit. Six artists have been given the chance to respond to it, and two are exceptional. Juliette Losq installs a fireplace and vernal drawings as theatrically peeling wallpaper to make a clearing which is as Freudian as it is Gothic. Hoxton visitors may recall Tom Wolseley’s caravan projects in the park behind the former ROOM: his ingeniously filmed socio-architectural analysis of this site is eloquently discussed by Vici Macdonald athttp://artorbit.me/2012/11/12/west-end-whammy-tom-wolseleys-house/