September brings a rush of shows as the ‘season opens’ – though mostly not yet, so there’s a mixture of ongoing pleasures and reliable previews in the following… starting with the painting above, which suggests a farewell to summer, and moving on to a preponderance of constructions, masking and deception. Among the many other shows opening in September and likely to prove interesting are Shannon Ebner and (in a new space) Ryan Sullivan at Sadie Coles, Uriel Orlow at Seventeen, ‘Lunar Sea’ at Transition, Sarah McKillop at the Mews Project Space (just 12-15 Sept), Hannah Knox at Ceri Hand, Hannah Maybank at Gimpel Fils, Sarah Anna Boghiguian and Goshka Macuga’s responses to Rabindranath Tagore at Iniva, Prem Sahib at Southard Reid, Lutz Bacher at the ICA, Tacita Dean at Frith Street, Steven Pippin at Dilston Grove, Andy Holden at Anita Zabludowicz, ‘2Q13: Women Collectors, Women Artists’ at Lloyd’s Club and ‘Long ago, and not true anyway’ at Waterside Contemporary. 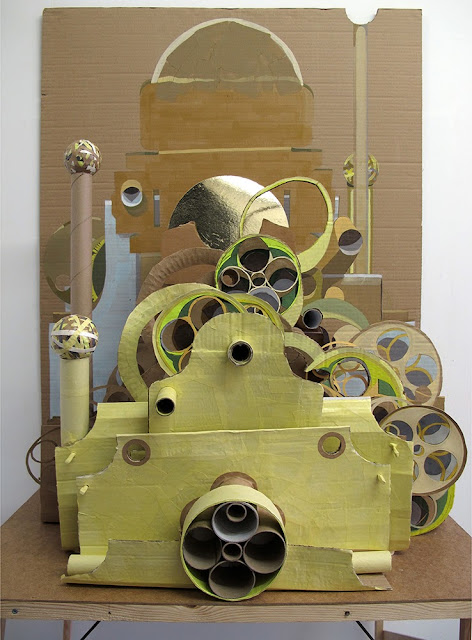 Clare Mitten: Yellow Mantel Mantel Fort – a new version will be in the show

This 19 artist extravaganza curated by Cullinan Richards in a charitable cause should prove lively. Certainly it contains a couple of bankers in Clare Mitten’s cheerfully clunky cardboard processings of the mechanical into the painterly geometries, which find a new way to give the impersonal a personality; and five large paintings by Aglaé Bassens – from the ‘outside’ range of her work, an odd sort of place which is visibly constructed out of props and paint, for all the yearning in its bodies of water. Bassens’ inside view of wigs as a transformative cipher is one of the best things in the patchy ‘paper’ show still on – until November! – at the Saatchi Gallery. 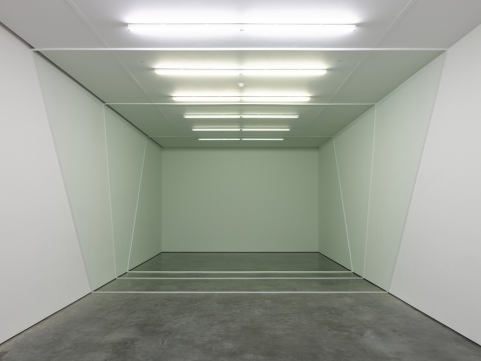 Sao Paulo based Marcius Galan present works developed during a recent residency at Vauxhall’s Gasworks across three rooms of the big White Cube: the stand-out is  ‘Three Sections’, which uses light to create an illusion of tilted panes of green glass, which had me prepared to bash my nose as I walked through, mindful of occasions when I’ve walked into the real thing! And Galan has plenty of other ideas: super-heavy would-be-mobiles; iron bunting origami; a logical progression of erasers wearing themselves out… 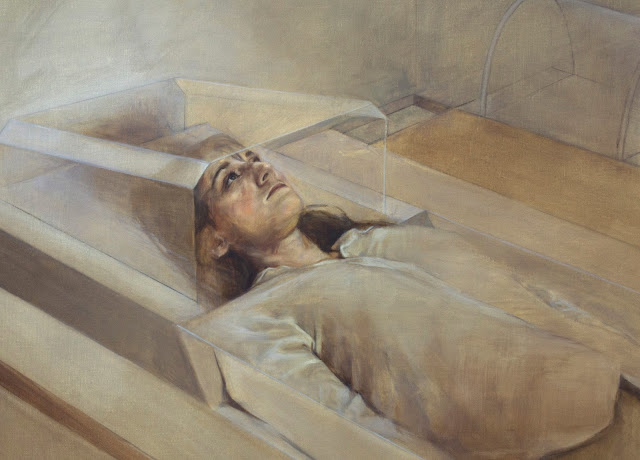 Position X (detail) London-based Czech Alzbeta Jaresova won the 2012 Griffin Prize of a six month residency leading to this show at Winsor & Newton’s gallery. Her unusual combinations of drawing-based paintings and sculptural constructions show people set in – perhaps limited by – geometric-tending environments which prove to be the very constructions which she’s made. These positions in contrivances prove atmospheric and quietly authoritative means to provoke such questions as: how does memory operate in forming our personal identities? Is it analogous to how architecture builds up what’s distinctive about a city? Is a house the embodiment of our own disposition? 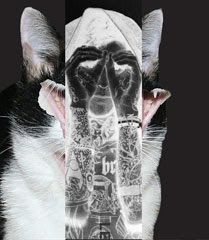 The rushing liquidity in Clunie Reid’s migration of her established collage techniques to a row of four video screens is the result, she told me, of running moving images at 12 frames per second instead of the usual 24, and inserting random still images into the vacated frames. The technique is applied to scrawled slogans (‘THINK GET’ swam out at me) and cartoons: sugar-sweet girly stuff of the My Little Pony school, and distorted women from pornographic animations – suggesting that the distinction between infantile and sexual has collapsed in both directions. Disorienting… but with a sleek black and candy-pink allure, and viewable from paradoxically laid back and comfortable seating. 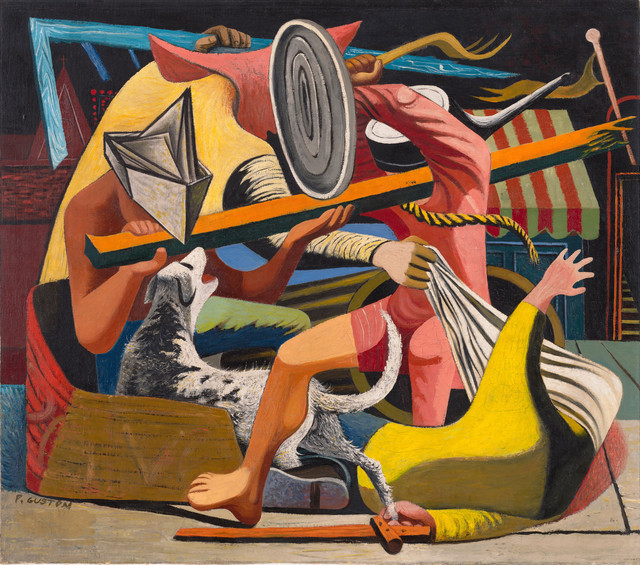 Philip Guston: Gladiators, 1940
The views of this show have tended to emphasise the absence of the murals by Riviera, Orozco and Siqueiros which have come to define Mexico’s place in the story of modern art. However, this is a superb combination of historical atmosphere and of painters and photographers, both Mexican and visiting, feeding off the revolutionary fervour. Los Tres Grandes get a painting each, and Manuel Alvarez Bravo, Henri Cartier-Bresson, Tina Modotti, Edward Burra, Marsden Hartley and Josef Albers are among the highlights. Guston, too, made a mural in Mexico, and it’s great to see a darkly humorous and turbulent early painting in which children with their faces hidden beneath improvised hats seem to be fighting a mock battle with the aim of unmasking each other. 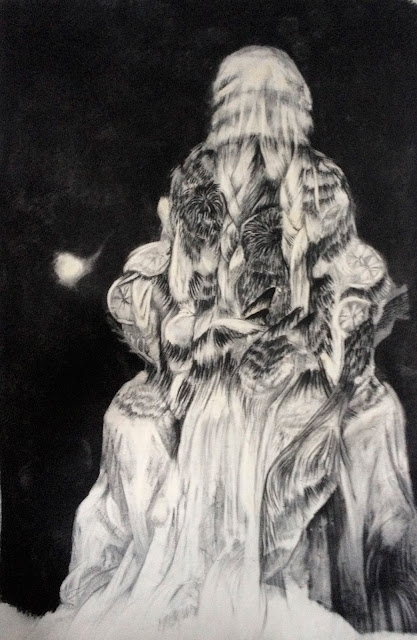 You can find an eclectic international section of 12 artists exploring masking – whether physical, social or ideological – just a few yards from Wandsworth Town railway station, where Norwegian Kristin Hjellegjerde moved from New York to open an adventurous space last year. Russian artist Daniel Bragin, for example, looks at how religion can act as a mask for consumerist desires; Bouke de Vries and Manuel Felesi make eerie use of ceramic doll heads; Italian Marco Querin tackles the burqa, which Hjellegjerde in her curatorial role brackets rather strikingly with nudity as ‘ways of hiding, or being hidden’; and American Rachel Bullock’s large charcoal drawing allows a woman to elude us in a fusion of re-animated fur coats and waterfalled mountain landscape.

Installation shot in the dark

The 14 artists generally taken to make up arte povera have received increasing attention in Britain in recent years, but Gilberto Zorio has had less than most.  He works with transformations between states, and so it’s appropriate that this spectacularly installed show has both intensely lit and wholly dark phases across a 15 minute cycle, which includes a whirling canoe and a sparking star as well as more sedately-paced alterations effected by copper sulphate.  The boat, representing exploratory impulses, is one of Zorio’s favourite symbols, along with the star – a breeze block a version of which is the centrepiece of the show – and the javelin, and they all cohere in echoes if you read the list of works into the microphones which the artist also provides.
____________
Daniel Silver: Dig @ Grafton Way – Bloomsbury
12 Sept – 3 Nov: http://www.artangel.org.uk/projects/2013/dig 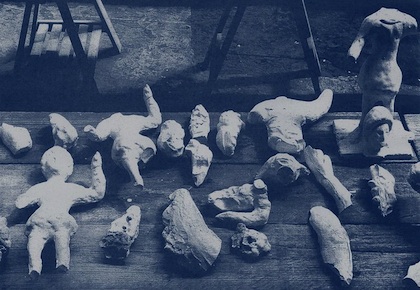 Daniel Silver is known for appropriating and transforming the traditions of figurative sculpture through re-use, collaging and outsourcing. For this free-to-all, no-booking-required Artangel commission in an overgrown inner city site he uses Freud’s collection of ethnographic figures as the starting point to set up the results of an apparent archaeological dig. Perhaps that stands in for burrowing into the subconscious and into Silver’s own history as an artist, as well as  challenging us to imagine the society from which the distorted and diminished ‘remains’ have come. As Silver said of the figures in his previous major show at Camden in 2007: ‘You can walk between them and start understanding the relationships they have with themselves… but then again you are also part of that’
____________
Julie Brook: Made, Unmade @ The Wapping Project,  Wapping Hydraulic Power Station, Wapping Wall
To 6 Oct:  www.thewappingproject.com 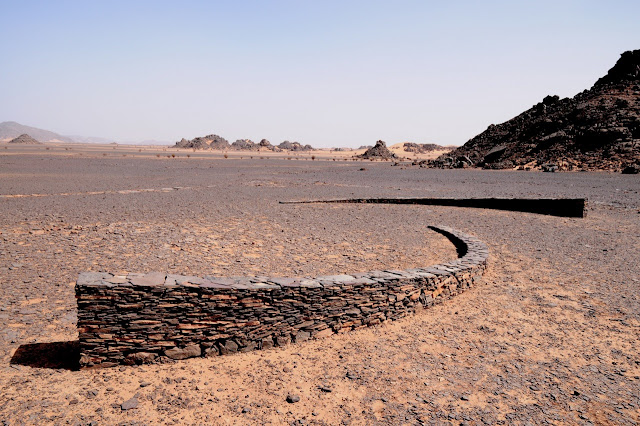 You might say that Skye-based Julie Brook’s twenty year career combines Richard Long’s empathetic sculptural working of the landscape with Carl Andre’s emphasis on the particularity of materials. She makes the most of Wapping’s unusually large spaces to show meditatively absorbing sequences of short films from the Libyan and Namibian deserts. One distinctive achievement is to combine man-made and natural, in both performance and outcomes, in such a way that the boundaries are blurred: scuffed lines and lava ridges; measured arrangements and blown sand; found boulders and imposed geometries – all feel of a piece. Where, I found myself wondering, does the human world end and the wilderness begin? 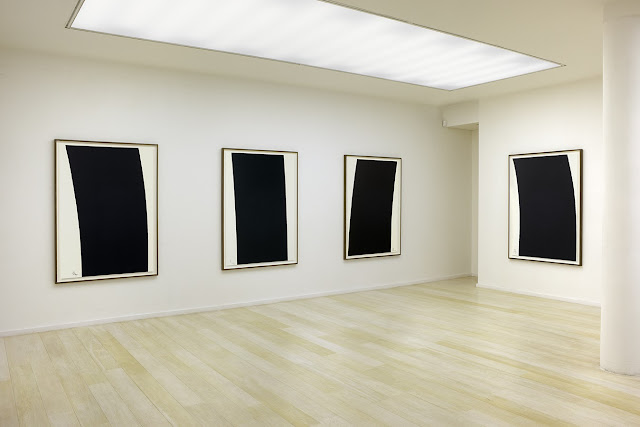 Richard Serra’s sculpture is all about weight, gravity and threat. How does that translate into two dimensions? His answer has been by drawing with heavy intensity using black paintstick as a material with its own dense monumentality. OK then, how does that operate as an etching? Serra utilises a stucco wall as the found origin of his dark textures, applying that to minimal forms dynamised by the way they lean into their white surrounds. At Alan Cristea, his first UK print show, allows us to judge across ten years of work how much is lost, retained and gained along that way. Meanwhile, at the Courtauld, Serra has come up with a new way of making drawings by sandwiching transparent plastic between Mylar sheets covered with litho crayon… 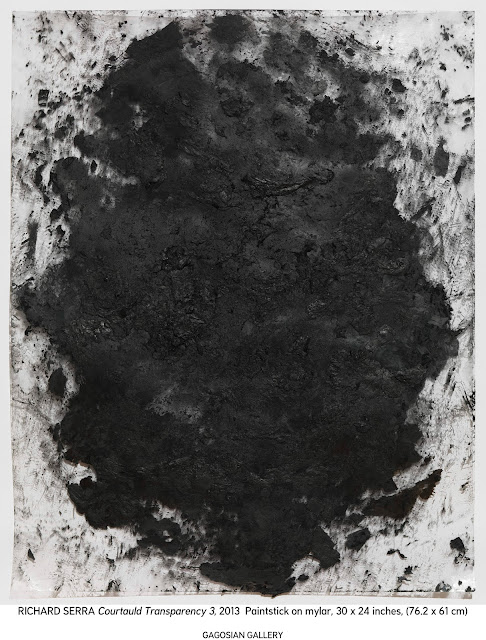 Top Photo: Aglaé Bassens: ‘Painting with a View’ from the Bow Arts Open