Tucked away in a group of spaces on the gloomy ground floor of the National Gallery is a superb exhibition that seems likely to attract less attention than it should in fact get. It is devoted to the work as a portraitist of Lorenzo Lotto, one of the leading painters of the 16th century in Venice – or, should one say, in the Veneto, as he seems to have spent a good deal of his time wandering around on the terra firma, just outside of the boundaries of Venice itself.

He has empathy with his subjects, an ability to describe their inner lives as well as their physical appearances – ELS

Lorenzo Lotto, in his lifetime, was a ‘never quite’. He was overshadowed by Titian, never married, and during the last few years of his life spent his time as a boarder in the Casa Santa at Loreto. Surviving documents show that at this period he received little for his work. His reputation, like that of Vermeer, only revived in the 19th century. As the big catalogue for the show at the NG makes clear, during the period of his re-emergence his work was often misattributed to a variety of other artists, some not even Italian. 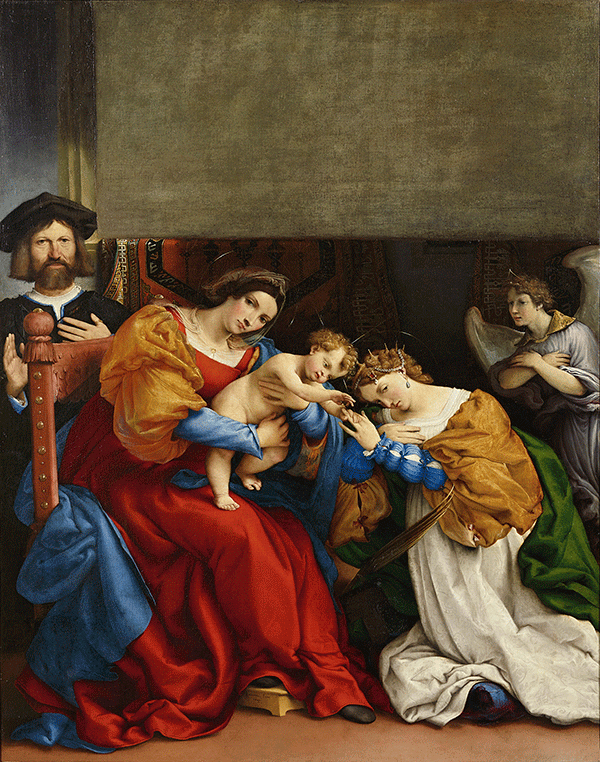 As the catalogue also makes clear, the show we now have in London is a somewhat cut down version of an exhibition initially shown at the Prado in Madrid. No matter, there is plenty here to think about.

By focusing on Lotto’s work as a portraitist, the first event ever to do so, the exhibition also makes clear what his special qualities are. He has empathy with his subjects, an ability to describe their inner lives as well as their physical appearances. At the same time, he has an eye for social nuance, His subjects were almost never the grandest of the grand. Quite a few of them were churchmen. Some were socially aspirant married couples, anxious to emphasise their status my commissioning a joint likeness. One often catches a note of social anxiety.

And some of the paintings on view, the largest and grandest, are not in fact portraits at all, but religious compositions into which portrait likenesses have been inserted.

The majority of Lotto’s subjects, inevitably given the time when the paintings were made, are men. There are, however, some telling images of women. The most telling of these is a painting that is already familiar because it is in the collection of the National Gallery itself. The sitter is unknown. It labelled simply Portrait of a Woman Inspired by Lucretia. The catalogue rightly comments that: “The portrait could not be more different from the pictures of anonymous, seductive and beautiful women so popular in Venice in the period.”

Where couples are portrayed, the man is invariably placed on the left-hand side of the composition, then considered to be the place of power. But also, as the catalogue points out, “Lotto creates metaphors through gestures and symbols.”

In the Portrait of a Married Couple from the Hermitage Museum in St Petersburg: “The couple’s arms are entwined as the centre of the work, emphasising the harmony of their union.” The man holds a sheet of paper inscribed with the words ‘Homo Numquam’ (Man Never). “The man is declaring that we will never neglect to care for his wife, nor will he ever abandon her in the face of trouble or danger – a commitment probably further alluded to by the unsettled sky seen through the window.”

Would that the messages now being put out by the current #MeToo generation of feminist artists were both so powerful and so subtle.

It adds to the pleasure of this superb Old Master show, with its large number of essential loans from significant institutions outside this country, that it is ‘free entry’.