Sometimes the dear old National Gallery here in London comes up with a nice surprise. Their new one-room, free entry exhibition is devoted to the work of the French painter Louis-Leopold Boilly, who lived from 1761 to 1845 – that is to say during one of the stormiest periods from French history. He was born near Lille, moved to Paris in 1785, was denounced during the Terror, adroitly managed to survive, and thereafter lived an extremely industrious life, turning out (it is now reckoned) around 5000 portraits of members of the French early 19th-century bourgeoisie. Some of these dinky little likenesses feature in the NG exhibition, but not many. The central theme of the show announces itself in its subtitle – Scenes from Parisian Life.

Boilly deserves a second look, what artists now do self-righteously, he does on the sly – ELS

Most of the paintings and drawings come – surprise! – from a British collection. The one formed by the late property developer Harry Hyams (yes, he of Centrepoint). They are now held at Hyams’ Ramsbury Manor Foundation. There are a few additions from elsewhere, including a painting loaned by the Louvre. Entitled The Meeting of Artists in Isabey’s Studio, and painted in 1793, just as the worst violence of the French Revolution was dying away, it offers a very populous and crowded group portrait of the YPAs (Younger Parisian Artists) of the time. Jacques-Louis David is not included. He was already too grand and well-known to be there. These are the artists who came after him, essentially those who created the bourgeois art of the first half the 19th century in France. Boilly included himself, slyly peeking out from the very back of the crowd. 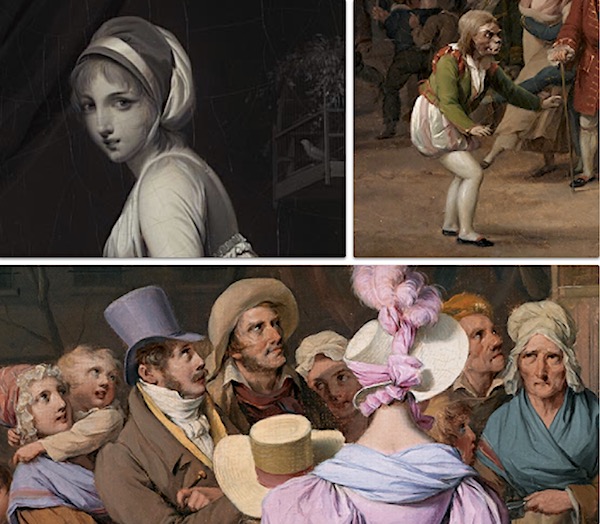 There is no real equivalent for Boilly in the British art of the same epoch. The nearest equivalents, not very near, are some of the drawings of social scenes made by Rowlandson. What distinguishes the bulk of the works on view – those that contain more than one figure – is the sly sense of observation. Every incident is brilliantly observed, and as you look closer, there is usually something just a little unsettling.

It is perhaps relevant to this that Boilly, at the beginning of his career, was close to being a pornographer. One of the two earliest paintings in the show, dated in the catalogue 1790-94, features a passionate lesbian kiss. In this sense, Boilly was the successor of the peintres galantes, Fragonard among them, of pre-Revolutionary France. In addition to this, he possessed a keen sense of social differences. Look, for example, at a drawing entitled To Pass, You Pay, in which a fashionable French family (and their dog) use a wheeled duckboard to navigate a muddy street. At the left edge of the composition, a down-and-outer reaches out his hand for money.

In some ways, Boilly comes close to his somewhat older Italian contemporary Domenico Tiepolo (1727-1804). The comparison suggests itself very directly by the subject of the largest painting on view, a Carnival Scene with a vast number of figures, dated 1832. The throng depicted there contains some grotesque characters reminiscent of Domenico’s Punchinelli.

Currently, when the art of our own time seems more and more determined to devote itself to social commentary, and also to self-glorification, Boilly deserves a second look. What artists now do self-righteously, he does on the sly. The show at the National Gallery begins with a drawing featuring four self-portraits – his own roguish, be-spectacled likeness, seen from four different angles. He often included himself in his crowd scenes, as he did in The Meeting of Artists. ‘The Artist is Present’, long before Mariana Abramovic attempted to take possession of that phrase. Boilly’s art lives on. Can one predict this kind of survival for his would-be competitors operating in the here-and-now of the early 21st century? He seems more safely in possession of the future than they are.