Even if you don’t know Robert Indiana’s name, you know his most popular work, LOVE. Cited as the most known artwork in the world, it is, in fact so famous that many people may not even realise it’s an artwork at all.

few images have been co-opted by so many diverse groups.

LOVE is everywhere, quite literally, in both authorised and unauthorised forms: on t-shirts, on skateboards, and postage stamps. Famously Indiana never copyrighted the image – so while his artwork became famous all over the world, he himself did not.

He originally designed it as a Christmas card for The Museum of Modern Art in 1965, and it became a sculpture in 1970 for the Indianapolis Museum of Art.

And while few images are more widely recognised around the world, it’s also true to say few images have been co-opted by so many diverse groups.

In 1970 as America intensified its campaign in Vietnam, LOVE was adopted by the anti-war movement for whom Love and Peace were interchangeable. And LOVE would be adopted by post-stonewall gay liberationists, which surprised Indiana, a gay man, as much as anyone else. It would be changed to AMOR, אהבה, AIDS, and even HOPE (a fundraiser for President Obama).

And once again, with what is happening in Ukraine, the show takes on a new profound significance.

He was born Robert Clark in Indiana but adopted his native state’s name when he moved to New York in 1954. By the time he was 17, he had moved 21 times. He knew the great American landscape, and the power of names, words, numbers, graphics, advertising, Americana, and signage obsessed him.

A huge LOVE sculpture welcomes you at the entrance to Yorkshire sculpture park. Designed as an urban American artwork, LOVE fits in just fine in the rolling hills of the British countryside. 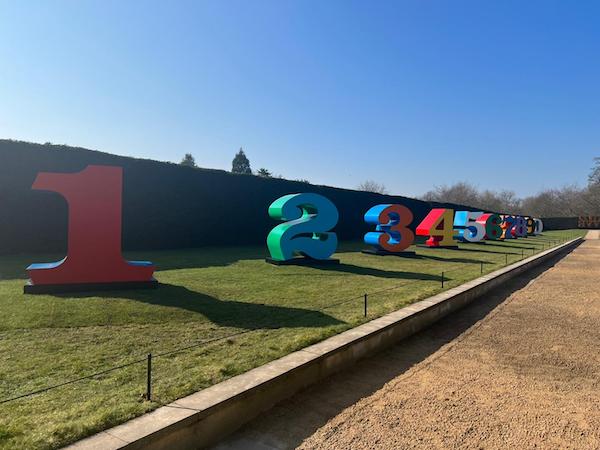 Robert Indiana ONE Through ZERO, YSP

Outside the Underground gallery are the brilliantly coloured, 6-foot-high aluminium sculptures ONE Through ZERO (The Ten Numbers) (1980–2001). Indiana saw them as representing the stages of life, from birth (1) to death (0). He hated the number 4 because it represented his hated adolescence. As he said: “Numbers fill my life…even more than love. We are immersed in numbers from the moment we’re born.”

Inside the gallery are earlier examples of his number pieces, and Indiana had been working with the numbers two-dimensionally since the late 1950s, but Numbers 1-0 was the first time he made them as sculptures.

Indiana met Ellsworth Kelly in 1956, and they became lovers. Kelly was a great influence on his work, and Indiana would say that Kelly gave his work the “hard edge”. They moved in together to a loft in Coenties Slip in NYC, already a creative community with artists like Agnes Martin and Cy Twombly (a later lover of Indiana). Moving to Coenties Slip would prove to be a decisive moment for Indiana’s work. 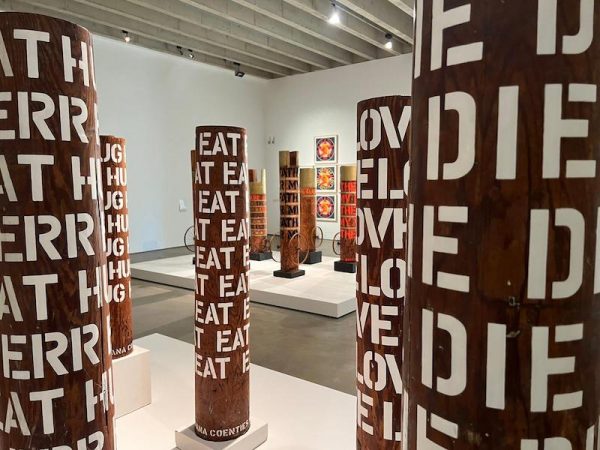 The slip was originally an artificial inlet in the East River for the loading and unloading of ships that was land-filled in 1835. This meant lots of debris from ships lying around, like rusty metal wheels and the mast sections, that would become material for Indiana’s Columns and Herms, which are displayed beautifully across three gallery spaces at YSP, including early wooden constructions as well as later bronze casts.

Coenties slip is mentioned in the opening page of Herman Melville’s Moby Dick. Melville himself lived in Coenties slip while writing Moby Dick, and it is a book Indiana would often reference.

In the exhibition are several works inspired by Moby Dick, including The Melville Triptych, Call me Ishmael and Ahab. The homoerotic theme and coded references of Moby Dick would have resonated personally for Indiana.

Talking of Dick, there are a LOT of phalluses in this show. He calls his totem-like sculptures “Herms” after the ancient Greek sculptures, which were used as protection at crossroads (a sort of signpost). They were basically a carved torso with a penis (pointing the way), and Indiana’s Herms are surprisingly true to the original source; similar proportions, solid verticals on a square base and a penis. They also work as contemporary signposts.

Often in these assemblages, Indiana uses found materials that resemble farm tools, and we see a pitchfork or hay rake penis, which surely references the Midwest prairies he grew up in.

Indiana could be political. Gay rights, anti-nuclear politics (Yield Brother, 1963), Civil rights (Mississippi, 1965 is on show here), and in 2003 he made a series of prints dedicated to Peace in response to the war in Iraq.

A particularly powerful work on show here is a Herm called ASH (1985), made at the height of the AIDS crisis, where Indiana constructs an erect penis from the bones of dead animals.

Robert Indiana died in 2018, and if the truth be told, Indiana came to despise LOVE because it dominated his career and obscured almost all of his other work over the past six decades. A fact that the Yorkshire Sculpture Park is correcting by giving him his first major exhibition in this country.