The seventeen new portraits created specifically for the New Museum show continues Lynette Yiadom-Boakye’s powerful reinvigoration of figurative painting. I first saw the British-born, Ghanian artist’s work at the Studio Museum in Harlem, and later, in the N.Y.C. group show “The Black Eye” curated by Nicola Vassell. Born in 1977, Yiadom-Boakye is one of the prominent painters of her generation and a 2013 Turner Prize finalist.

Almost all the paintings are of men, and the few of women also maintain an enigmatic gaze.  One three-part painting, “Vigil For A Horseman” (2017) turns the subjects into male odalisques, lounging seductively on a vertically striped foreground.  Other canvases include animals….. pets, spirit creatures,  or artistic foils. Birds perch on hands and a cat curves in a feline embrace. 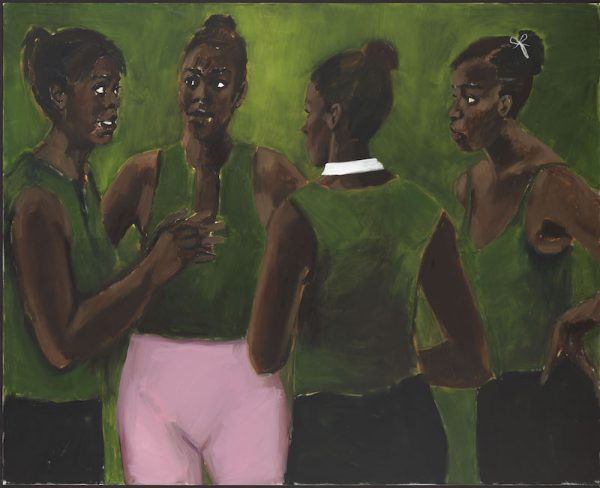 Yiadom-Boajye’s wet on wet technique yields an appealing immediacy, while her strong abbreviated brushwork conveys both movement and emotion. The artist obviously savours her medium of oil paint, working with a loose confidence that translates to an economical grace.

Assistant Curator Natalie Bell, who worked with Massimiliano Gioni on the show, calls Yiadom-Boakye “ A wildly prolific artist. These works were produced in three months.” Bell continued, “Lynette’s works are timeless but timely, reminding us of the importance of black portraiture today.”  Hung by the artist on dark claret walls, the mostly caliginous palette is enriched with burnt oranges, muted greens and flashes of shadowed white enlivening a narrow belt, a checkerboard floor or soft cotton clothing. “Mercy Over Matter” hung in the centre of the primary wall, is a sole radiant corolla in the midst of shadowed paintings.

In the catalogue interview, the artist has said of her painting, “It’s an immersive process with precious little logical planning, but plenty of magic, rumination and deviation.”  Yiadom-Boakye’s enigmatically titled,  invented imagery portrays an unself-conscious beauty that inspires personal and lyrical interpretations.