As a focal point for the oil industry in the US, Oklahoma is associated with roads (Route 66), cars and gasoline. All these feature significantly in the oeuvre of Ed Ruscha, who, although he is primarily associated with the cityscape of Los Angeles, grew up in Oklahoma (city and state). Ruscha has said that everything he’s done was already part of him when he left Oklahoma at 18.

From early in his career, Ruscha began to isolate and recombine words and images

Ed Ruscha: OKLA at Oklahoma Contemporary is the first exhibition to examine Ruscha’s work within the context of those formative years in Oklahoma. The roots of his art that are traced to Oklahoma and the American heartland include: 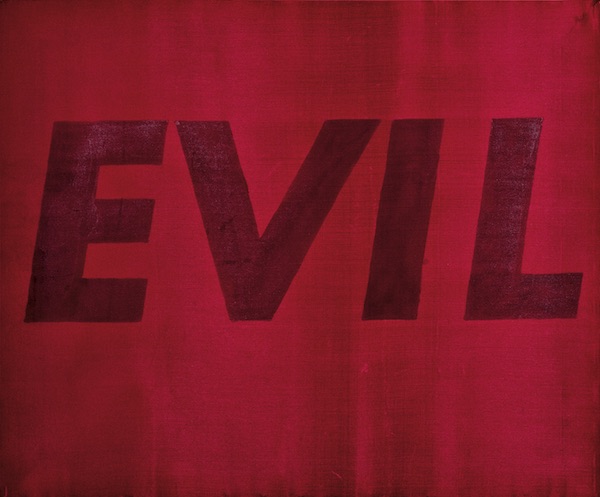 Oklahoma OK: showcasing many direct references to Oklahoma itself, both textual and otherwise, and including a number of works using the letters “OK,” which takes a double meaning as both “OK” and as a reference to his childhood home.

Made in USA: looking at Ruscha’s perspective as an American more broadly, from his depictions of the decline of American manufacturing to more direct engagements with politics.

51% Angel, 49% Devil: demonstrating the continuing influence of growing up Catholic, an important facet of the artist’s childhood.

Pop Origins: tracing Ruscha’s frequent references to the popular culture of his 1940’s childhood, including movies, comics and advertising.

US 66: looking at his fascination with cars and life on the road and examining the vistas and mythology of the route west, driven by Ruscha many times as he returned, over and over, from his home in LA to his roots in Oklahoma City.

Ruscha came to prominence in LA during the late 1950s making small collages similar to those of Jasper Johns and Robert Rauschenberg. His first solo exhibition was at the Ferus Gallery in LA in 1963. LA is his adopted hometown and the significance to him of both the actual and adopted is recognised in the exhibition’s title, which references both.

From early in his career, Ruscha began to isolate and recombine words and images oscillating between sign and substance and utilising graphics to reveal the dual nature of paintings as both object and illusion. His sources were drawn from the every day and he embraced the techniques and imagery of commercial culture so, when combined with his playful use of irony, paradox and absurdist juxtapositions, he made the ordinary extraordinary.

He has said that there are things he is constantly looking at that he feels ‘should be elevated to greater status, almost to philosophical status or to a religious status.’ It is for that reason that he takes things out of context or isolates a word or image: ‘It’s the concept of taking something that’s not subject matter and making it subject matter.’ 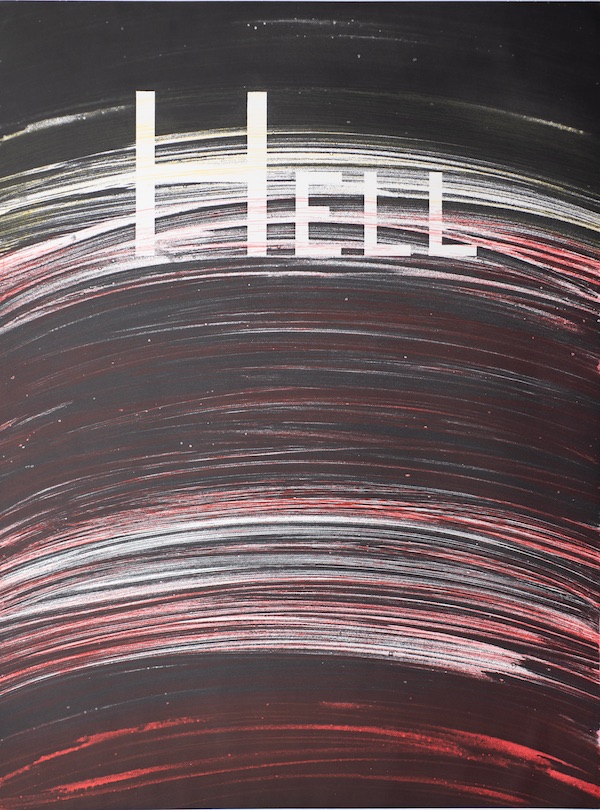 Ed Ruscha Hell 1988 © Courtesy of the artist and the collection of Jordan D. Schnitzer

The reference to religion here is significant in the context of this exhibition and Ruscha’s praxis. In an article on the exhibition for National Catholic Reporter Ruscha says, ‘I am a confirmed atheist today, but the church helped me get where I am.’ By exploring his childhood influences, this exhibition is one of the first to take serious note of Ruscha’s statement; Three Catholics: Andy Warhol, Ed Ruscha & Robert Mapplethorpe at Cheim Reid in 1998 being another. 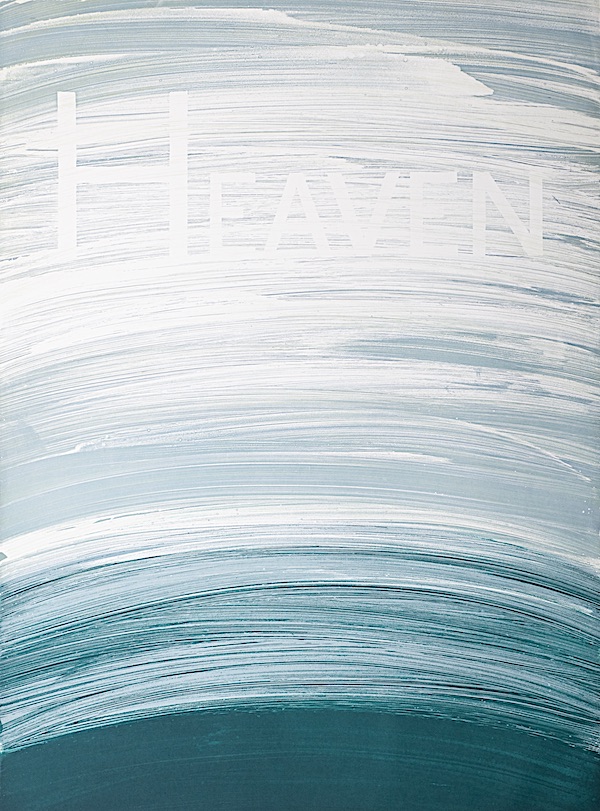 Ruscha has spoken engagingly about his early years in a conversation with fellow artist Joe Goode for ‘Interview’ magazine. The two met at Rosary School, Second Grade, and later studied together at the Chouinard Art Institute in LA. In their conversation, it is Ruscha who raises the question of whether the influence of Catholicism ever creeps into their work, thinking that it does in his work. Goode agrees suggesting that that influence is seen in works like ‘Miracle’ which depict a bright beam of light from an unknown source entering a dark space from above. Goode associates the light with church windows, but its source could also be a cinema projector.

Such dual associations are typical of Ruscha’s work. He said of his ‘Miracle’ film from 1975: ‘It’s more like a blend and I like blends of things. The blend of things between one thing and another to me is like incompetency and almost a spiritual success, and all the blendings between, that’s my film, that’s “miracle”.’

Dual associations, blends and juxtapositions are, I think, at the heart of the influence that Ruscha believes Catholicism to have had on his work. He has said that there is a connection with his work and his experience with religious icons: the cross and the Church’s stations. He has spoken of this connection in terms of flavours that come over, ‘like incense used in the Church, benediction … the ritual … a deeply mysterious thing that affected me.’ More than that, however, is the dual nature of religious icons and Church rituals through which the ordinary becomes extraordinary; pigment on board becoming a window to the divine and bread and wine, the body and blood of Christ.

Jeremiah Matthew Davis, Oklahoma Contemporary’s artistic director, says in the NCR article that he hopes the exhibition will ‘put to bed the false narrative that somehow contemporary religion and contemporary art can’t reconcile, or are inherently diametrically opposed.’ This exhibition is part of a growing trend to take seriously the religious influences found in the work of many contemporary or modern artists.

This is not to claim such artists for the Church – Ruscha is a confirmed atheist – but acknowledges the reality of religious influences in work in ways that in earlier periods of modernism either went unacknowledged or were dismissed. Additionally, as I have sought to do in articles for Artlyst about Salvador Dali, Rose Finn-Kelcey, Robert Rauschenberg, Robert Smithson and Andy Warhol, among others, this acknowledgement of influence fills out our understanding of art history in the modern period whilst also creating a clearer picture of the continuing impact in a changed and changing cultural landscape of religious practices and theological ideas. Oklahoma Contemporary is to be congratulated for making this one significant focus in exploring the wide-ranging and incisive engagement with our contemporary world that can be found within Ruscha’s work.