Women’s history month in New York City heralds two amazing women artists whose long inspirational careers are celebrations of feminism and creativity. Maggi Hambling Real-Time Marlborough Gallery Maggi Hambling suffered a heart attack last week on the eve of her first solo exhibition in New York. Hambling, seventy-six, was at the Manhattan home of her friends, artist Cecily Brown and writer Nicolai Ouroussoff when she collapsed. She is currently in hospital and is expected to make a full recovery.

Hambling is one of Britain’s leading and most controversial artists. Her exhibition’ Real Time’ at Marlborough Gallery New York (March 10—April 30) features two major new groups of paintings alongside works from her celebrated Walls of Water paintings a decade ago. The exhibition marks a long-overdue debut in New York, where she lived for a short time in 1969. 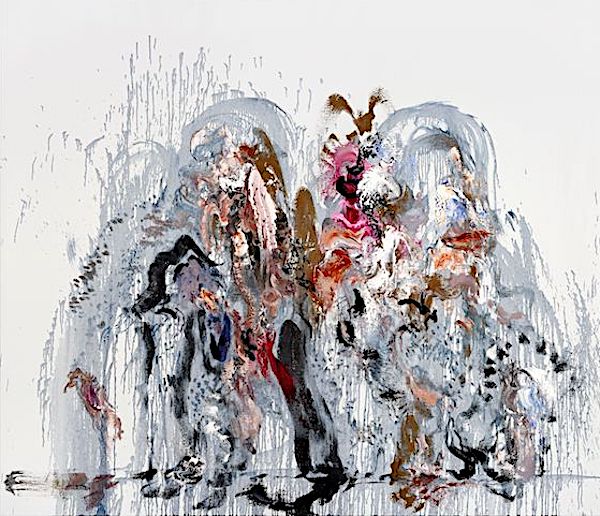 In her first NYC solo show, Maggi Hambling shows American audiences her mastery that has captivated the English art world for many decades. Known as a brilliant portraitist, her 1997 Oscar Wilde sculpture in central London ignited controversy as she had the author sit upright in a sarcophagus, smoking a cigarette.

This show focuses on the “Wall of Water” series, monumental gestural portraits of turbulent waves. An indigo palette, interspersed with licks of crimson or orange, captures the ecstasy of an undulant sea. Hambling is an artist who has always been unafraid of beauty or emotion, and the full force of her bold markings are on bravado display here. The textural power and chromatic volume of “Wall of Water V” epitomize an explosive swath of churning cold sea.

The show’s title addresses the human condition, and the artist has said, “I’m trying to paint death with as much life as I can.” This exhibition magnificently fulfils her creative vision.

In 1969, Ringgold was part of a protest against the Museum of Modern Art, demanding inclusion of black artists and the Museum’s expansion into surrounding New York City communities. Bold graphics from the sixties supported Angela Davis and the Black Panther Party, and the offset lithographic political posters are treasures. Another highlight is the inclusion of three large scale murals, including the 1971 “For the Women’s House” created for the Rikers Island women’s prison. “A Feminist Series” from 1972, inspired by Tibetan Tankas, shows the artist’s early inclusion of sewn fabric borders, quilting and painting, which leads to the 1990’s quilt works that are most associated with Ringgold. “A Feminist Series” features nude women against a tropical background, including one proud pregnant figure who locks her unblinking and fantastical eyes with the viewer.

The dense, gorgeous Story quilts with text are set in a crowded Harlem building, or cotton fields replete with a preacher, on to odes to Josephine Baker with banana skirted beauties. “The French Collection” consists of twelve quilts depicting a young black artist and mother travelling in France, with gems like “Dancing at the Louvre” young girls twirling beneath Mona Lisa’s gaze.

Also included are the original illustrations for the children’s classic and beloved book “Tar Beach”.

In her ninth decade, the artist continues working as an iconic and inspirational artist. Faith Ringgold’s expansive vision, tenacity and exuberance has never been more necessary.