The Magic Realism: Art In Weimar Germany 1919-33 show that just opened at Tate Modern is a welcome addition to what you can see at this major London institution, more especially as, unlike other special exhibitions current there, it’s free entry. It’s also scheduled to last for a very long time. It doesn’t close till July 2019.

The bulk of the works on show come from the collection of the Greek billionaire shipowner George Economou, of whom Lloydslist once remarked rather dryly: “No one who calls their yacht Barracuda can be too concerned about safeguarding an angelic image.” Yet he doesn’t mind parting with a tranche of his collection for such a long time. He collects on a major scale and these paintings and prints are not, according to reports, those that he regularly keeps on his walls at home. Many of them are not by artists who are widely known. Lending to them to a gallery as prestigious as Tate for a prolonged period can only raise their value. One can’t quarrel with the quality of what’s on display, even if one doesn’t always recognise the names. 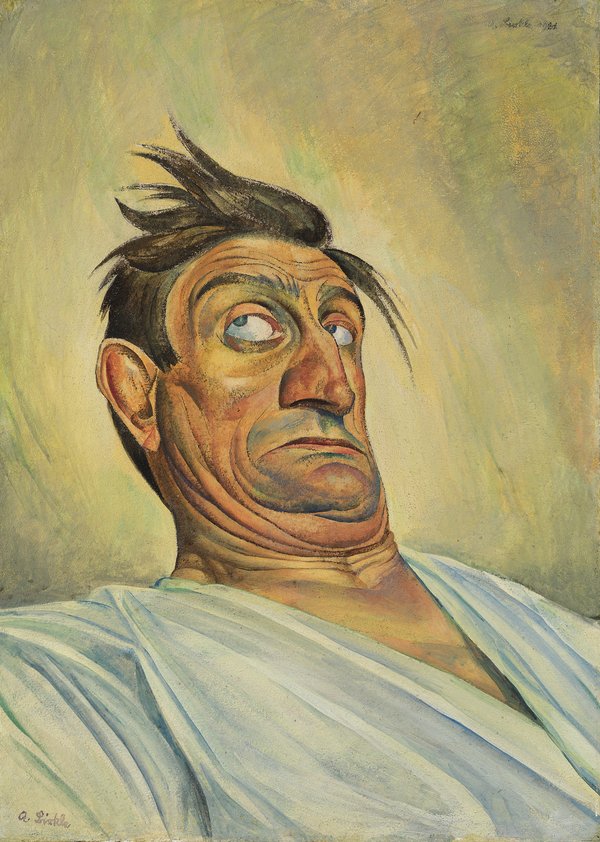 The collector’s one disappointment may have been that the exhibition, as it opened, got some rather downbeat reviews. Alistair Sooke, reviewing it for the Telegraph, dismissed it as “a timely, if drab portrait of the Weimar years.”

Tate may, perhaps, have anticipated a rather limp reaction of this kind from their target audience. “OK, so we’ve done a good deed for a rich man. No need to go further.” Better, they seem to have felt, to spend time, budget and effort promoting the current Picasso show, or the last few days of Joan Jonas.

It’s significant that, while there is indeed an illustrated catalogue for the Magic Realism exhibition, when I got there it was already unavailable. “Sold out,” – this just four days after the opening.

Of course, it helps that it is a free show. But the audience’s eagerness not only to see but in this case to have a record of what it saw, surely has something to tell us. The animated crowd of visitors I found at Tate offered a somewhat startling contrast to the sepulchral emptiness of supposedly avant-garde commercial galleries I’ve visited recently: an ambitious two-gallery survey at White Cube Bermondsey and White Cube Mason’s Yard, for example. And these are also free entry. But the mass audience, it seems, doesn’t want to know about self-conscious avant-gardery. It likes more solid fare.

The Magic Realism exhibition spans more than purely German art. It also wanders, from time to time out of a strictly Weimar time-frame. It is closely related to a number of other shows that have been presented recently in London, in official and semi-official galleries. These have looked at the Russian Revolution and its aftermath, and a World War I and its aftermath. And not surprisingly, it offers warnings for our own society, which seems to have set its feet on a downward path.

One of its most striking images is a painting an urban of a down-and-out by Conrad Felixmüller (1897-1977), one of the German artists who, following World War I, transited from Expressionism to a kind of intensified realism. He became a leading figure in the Weimar New-Objectivity movement.

In 1929 Felixmüller wrote: “It has become increasingly clear to me that the only necessary goal is to depict the direct, simple life which one has lived oneself, also involving the design of colour as painting—in the manner in which it was cultivated by the Old Masters for centuries, until Impressionism and Expressionism, infected by the technical and industrial delusions of grandeur, rejected every affinity for tradition, ability and results, committing hara-kiri.”

Few artists would frame retro-ambitions quite so bluntly today, but this does sound like something that might perhaps find a place in an upcoming Stuckist manifesto.

Similarly, Jeanne Mammen, the only woman featured in the show, offers work that seems very much at home in the context of today’s resurgent, take-no-prisoners feminism.

The paradox is that this show is more up to the minute, more genuinely in touch with the contemporary audience, than its organisers seem to have recognised.