Paul Carey-Kent publishes his March Choices 2017 – Up Now in a London Gallery near you. 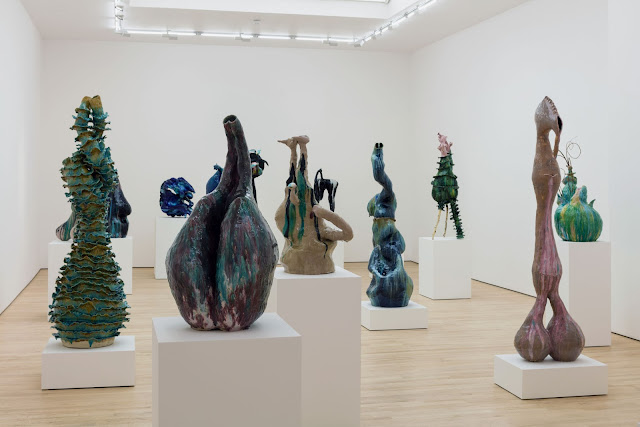 Frankfurt-based Sebastian Stöhrer sets up a striking array of anthropomorphic ceramics which yet retain some vestigial potential for functionality. Maybe it’s a forest of forms, as Stöhrer includes wooden legs and even a collar of fungus on one of his folkloric figures. Up close, the alchemical glaze colours and witty inventions of form make this an engaging contribution to the recent resurgence of clay in art.Here’s a would-be-jug with tongue and balls:

If you’re missing the RA’s Ab Ex show and can can’t get to its superior instantiation in Bilbao (see my comparison at http://www.saturationpoint.org.uk/Abstract_Expressionism.html), fear not! There are two show excellent in that spirit in London now… 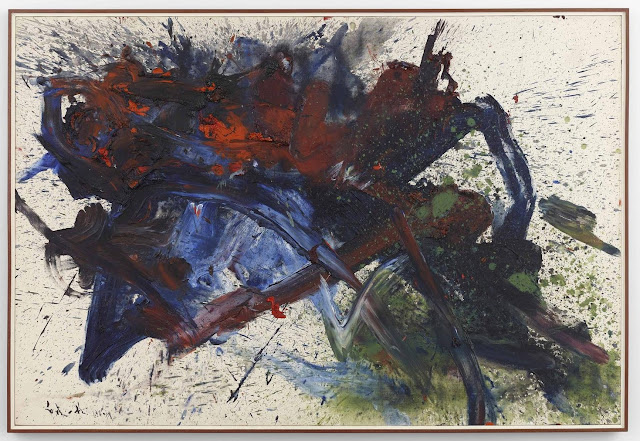 I take little notice of the market, but it’s hard not to be aware that the price of a good Shiraga has increased tenfold in the ten years since the leading Gutaï member (1924-2008) last showed solo in London. And these are good examples, especially the three from the ‘Margin series’, named for outlaw characters in the Chinese saga of bandits revelling against the emperor – just as Shiraga rebelled against convention by sliding across and swirling around the paint (actually applied by his wife) into place with his feet as he swung across the canvas. What started as a provocative action in 1954 generated a stream of supra-residual results combining violence, dance and meditation. Shiraga went on producing them until his death, undeflected by being a Buddhist priest from 1971. 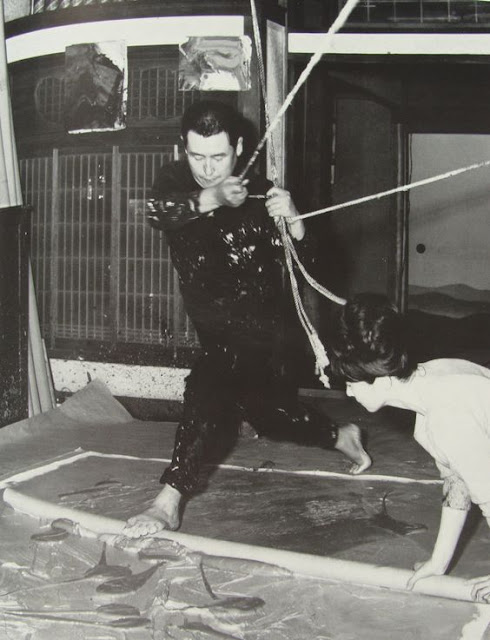 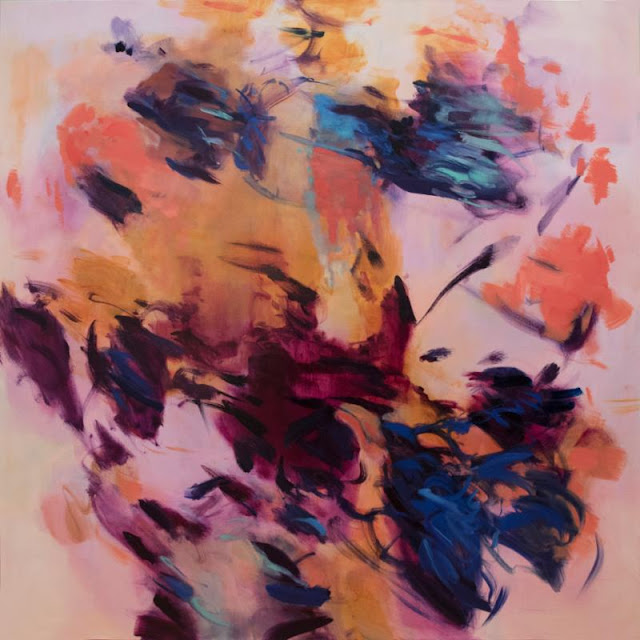 It’s an old twist: ‘actually that’s not an abstract painting’, you say, ‘but a highly realistic representation of an abstract painting’. Just so, in a way, Rebecca Meanley’s 16-strong 2016 set of 1.45m square canvasses all start by depicting the rag she used to wipe away paint from the last one in the cycle, and then diverge into the wet-into-wet realm of intuitive colour and gesture. ‘Oh but they are beautiful!’ you will say, which is hard to deny, but it’s the intensity of exploration which gives them the backbone without which beauty can be mush. 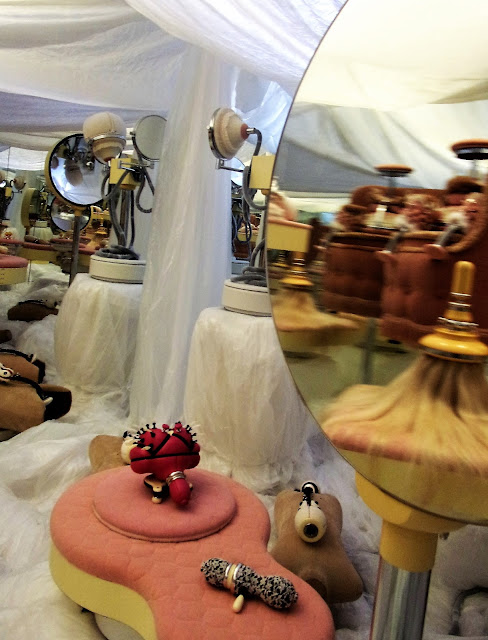 A glimpse into Mark Woods’ installation

Here’s a fine contrasting double show. Upstairs Mark Woods makes a spectacular presentation of a decade’s production of glamorously kitted out sculpture-jewel-toys serried in the drawers of superbly carpentered cabinets and reflected in the spinning mirrors of an impressive peephole kaleidoscope installation. Woods’ objects transcend function, but would fit in with sex being sold as a religion: the old certainties of commerce, desire and god are artificialised, and in the middle sits a gleaming black heart. The hemmed-in basement space, dark at the building’s heart, also holds many works, but these are a tributary of Lee Maelzer’s practice: intensely atmospheric small photographs and collages, often with painted interventions, which feed into her paintings – which are often of dimly lit interiors. 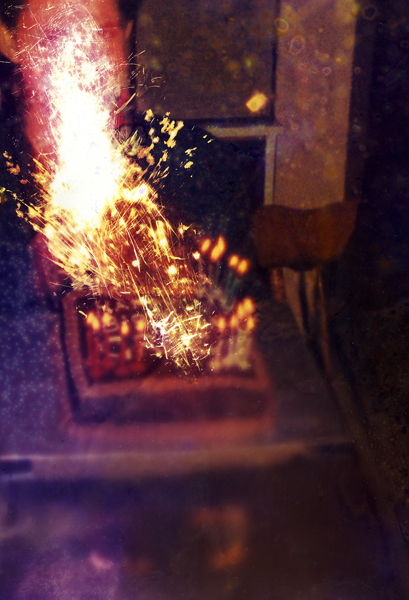 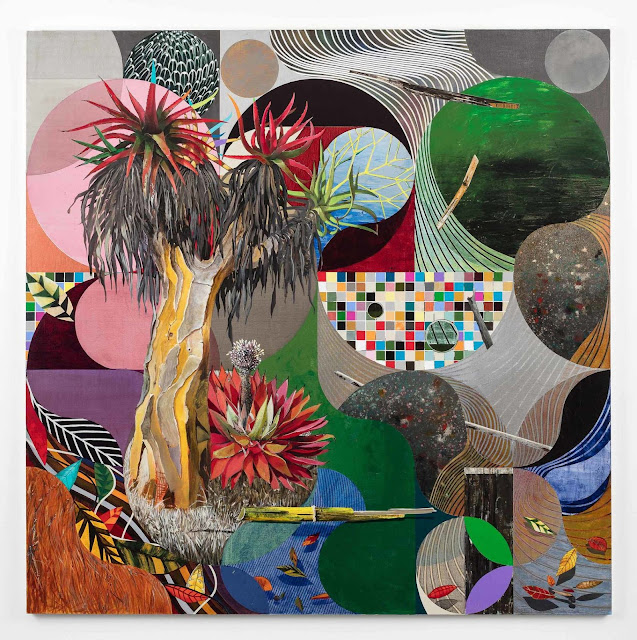 It’s a measure of how tough it is for artists that few from Max Wigram’s roster have been picked up by other London galleries – as Luiz Zerbiini has – since Max Wigram’s precipitate closure in 2015. The Brazilian works across abstraction and representation separately but simultaneously, and it’s obvious how the streams of painting influence each other: the patterns of Rio’s reality are exaggerated, the abstracts suggested perceptual hazing of the world. A similar to and fro operates in his unusual and historically resonant collages of found slides. Plus, in a new development, Zerbini has started to apply obsessive pencil workings to some canvases, and the low key pseudo-metallic look of that has also started to spread into his whole practice. 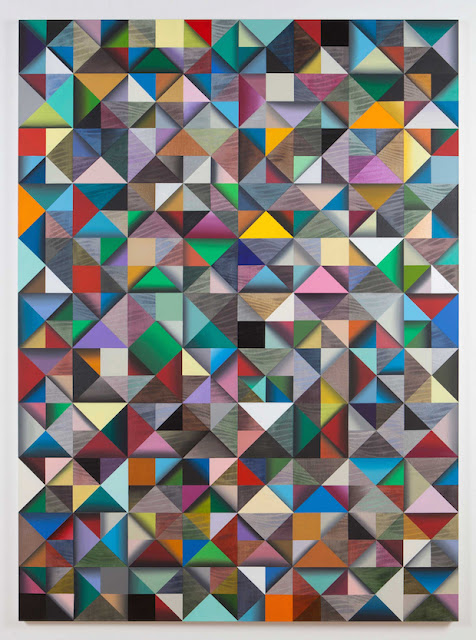 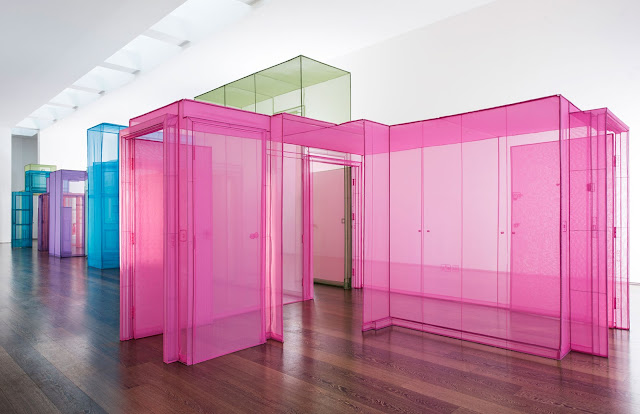 Do Ho Suh – formerly of Korea, the USA and Germany, now lives a stone’s throw from Victoria Miro, where his three-floor exhibition ticks plenty of popular boxes: obvious craftsmanship, a walk-through installation, good selfie opportunities, alluring colour, a film with small children. Yet it is essentially a quietly thoughtful show, in which buildings are displayed as skin, so intimately does Suh engage with them; geography is collapsed into personal space; and we’re drawn into the metaphorical potential of corridors, hallways, and exits. 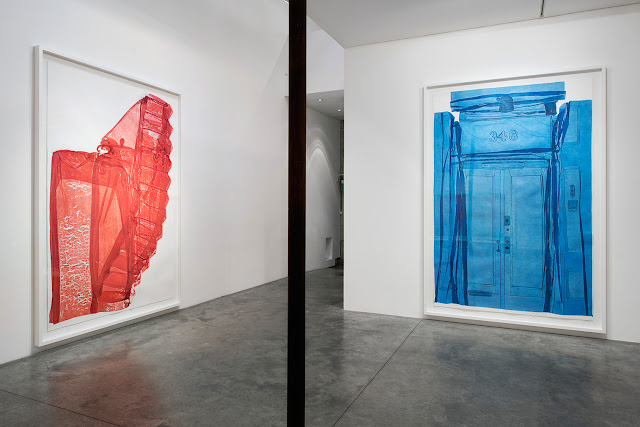 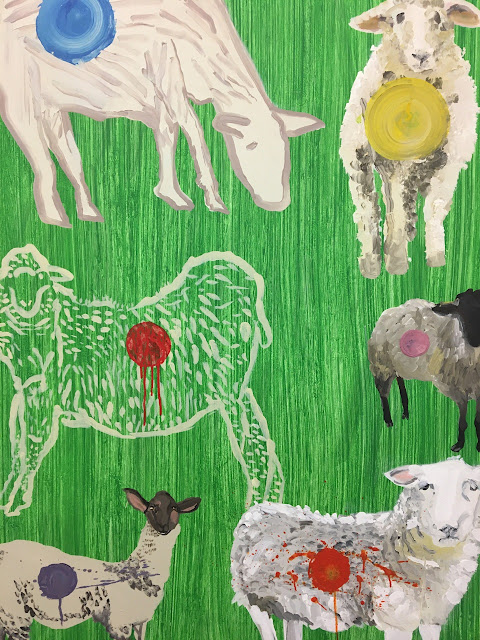 Young painter Adam Hennessey describes his work as ‘squishing large things into small spaces’. That’s true of many of the wittily ebullient acrylics on show here – several smiley faces jostle to be sunniest, and birds struggle to fit in their framing. But there’s no squishing required to get these 25 canvases into Fred Mann’s expansive new space. Indeed, there’s enough capacity to hold a room back for small works on paper to be painted ready for a closing event on 4 March. Hennessey has a particular affinity with fingers and sheep: the former appear directly several times , though the ‘Finger Alphabet’ merely points to an anagram caused by alphabetical order; a characterfully distinguished herd of the latter seem to have been shot – if only, perhaps, with paint – before they can enjoy the lushest grass you ever didn’t really see, it was just a picture in Sheep Lane. 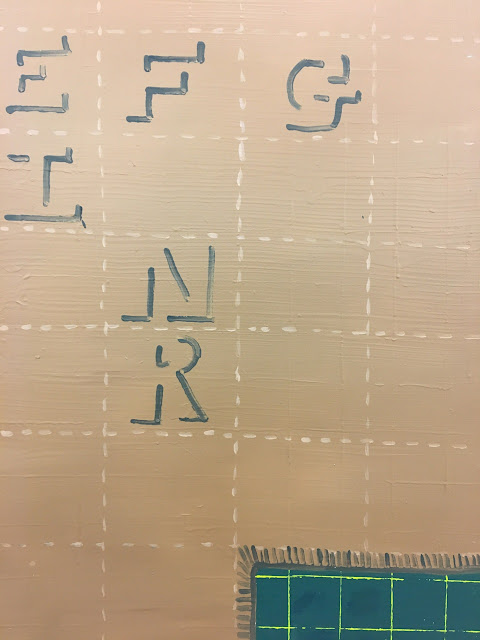 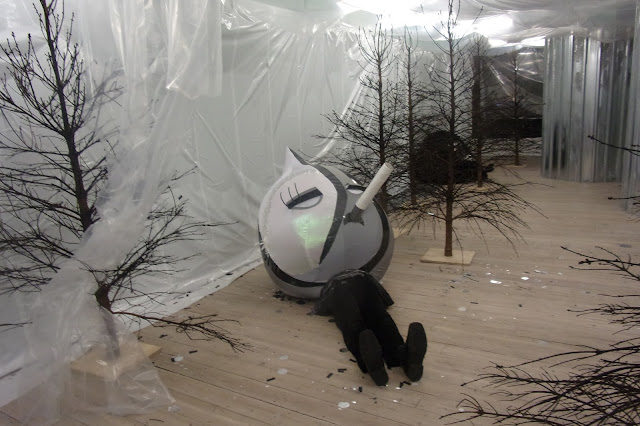 Russian artist Irina Korina, who trained as a set designer, is known for her theatrical installations made out of commonplace materials. Here she presents whimsical soft sculptures of black and white emoticon characters – a human meteorite, a fire-person, a teardrop smoking a cigarette. They’re set in a hostile forest environment which didn’t prove so easy to source as one might expect. When the show was put up in early December, dead Christmas trees were so rare that she had to have twenty healthy specimens torched. Now, it fits the calendar: too much drunk over the festive season, you come round and it’s Trump. So if blasted joy is your thing, you’ll like the heavily ironic ‘Destined to be Happy’ – the more so as each of the six sculptural stations comes with its own atmospheric soundtrack generated out of aural bric-a-brac by Sergey Kasich. 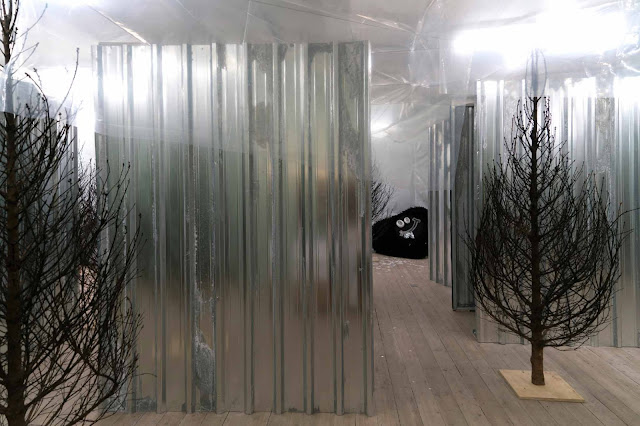 Three shows curated by me… Ears for the Eyes (to 4 March at Transition Gallery) / Show Us Your Process / The Other Side (both to July at House of St Barnabas – contact art@hosb.org.uk to visit) 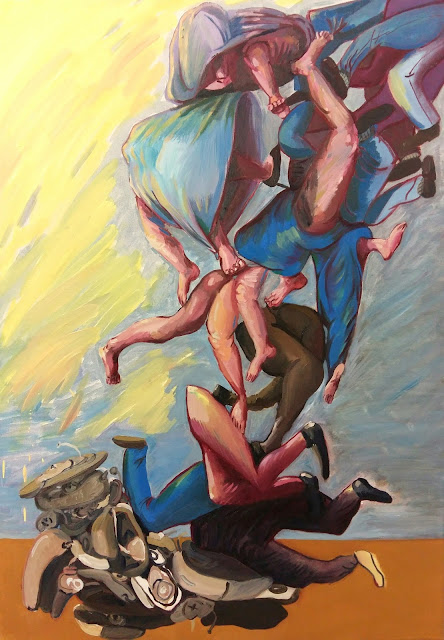 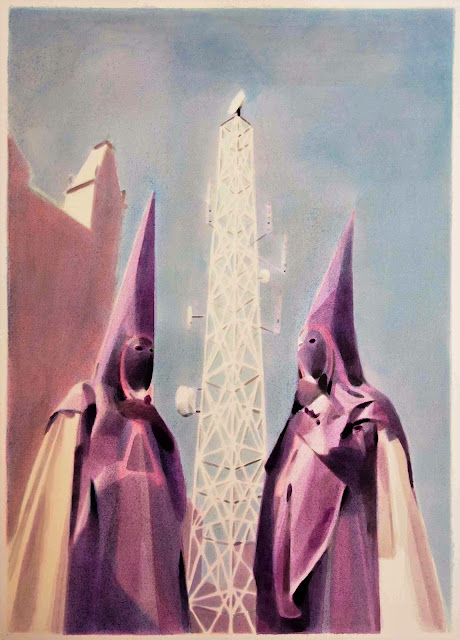