The more top-class photo shows I see, the more depressed I become with the state of contemporary painting. Photography currently has a much broader reach, and it often tells you things you didn’t know about previously. Painting now very rarely bothers to inform -it’s above all that. Here, to end the year 2019 is a show that exemplifies these points. At Hamilton’s, London’s premier commercial gallery specialising in photography, it offers a series of images by Mario Testino, ‘Me Too’ aside, one of the best-known photographers currently at work. What he usually offers are fashion images and portraits, two fields that photography has more or less completely taken over from painting. 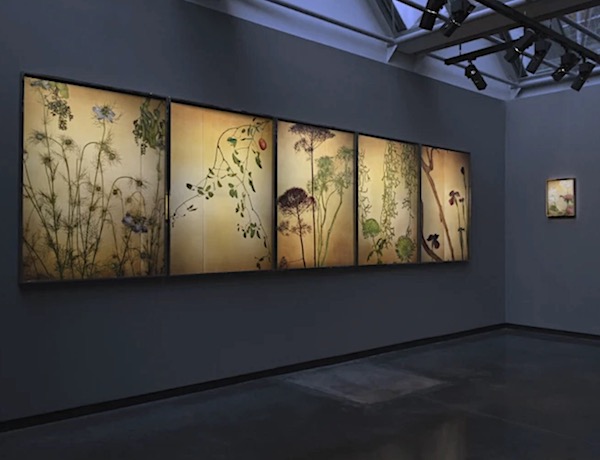 This exhibition, subtitled ‘East’, is a little bit different. It consists of two sets of images, both of them very much identified with traditional aspects of Japanese culture.

There are still lifes of flowers, each with a moralistic subtext, plus, dominating the room in which they are shown, a panoramic image that paraphrases a Japanese screen. And, in another space, there are photographs of intricately tattooed men. Their bodies are never shown complete, but their limbs are intricate, though non-erotically, intertwined. The hand-list for the show spells out the culturally ambiguous status of these images. They are the work of Horiyoshi III, one of the essential matters of tattoo in contemporary Japan.

The images he produces are simultaneously traditional, and at the same time, subtly subversive. The client, owner of the living body on which these elaborate designs are traced, is given no controls over what appears on his skin. The elaborate images are improvised by the artist, with no advance plan.

While the tattoos are a cherished expression of Japanese culture, they are at the same time subversive. In the 19th century, elaborate body-decorations of this sort became associated with the Yakusa – what we would now call the Japanese mafia, and the Meiji government of the time banned them from being displayed in public. For this reason, they could only be placed on areas of the body that were entirely concealed by clothing. Testino’s photographs follow this rule. He shows us the vividly ornamented bodies, but not the heads or the hands of the masculine bearers of these designs. If your body was elaborately ornamented in this way, you belonged to a secret, and potentially outlawed segment of Japanese society. One may guess that, even in the Japanese society of today, the outlaw vibe of these body images persists. By making them, Testino lets the spectator into a secret, still quasi-forbidden world. One wonders how they would be received if the context was less comfortably exotic.

Exotic as the images are, they nevertheless carry with them the kind of ‘outsider’ vibe that was, till recently, one of the defining characteristics of Western modernist art. Which, given how moralistic the art of the present moment has become, gives them a double frisson. One can imagine the kind of uproar that might possibly be caused by a display of Western male bodies, densely ornamented using the same techniques, but offering images intimately related to the shibboleths of our own contemporary culture. Outlaw artists still exist in the West, but they are becoming an increasingly threatened species.