In his book, God in the Gallery: A Christian Approach to Modern Art Daniel Siedell suggests that many works of modern and contemporary art are ‘poignant altars to the unknown god in aesthetic form.’ He makes this claim because such works manifest the priestly function of ‘yearning for a liturgical reality that reveals the world as gift and offering.’ These altars/artworks become a ‘place in which the visible and invisible creations, the tangible and intangible creations, are linked together.’

In the 1980’s he began working with musical loops in bands and as a DJ; he eventually combined these practices in the methodology for which he became recognised as a video and sound artist. The ‘votive’ implications of Dean’s work took on new significance when he was ordained in the Church of England in 2010. He is not seeking to make images of God, however, but rather the representation of personhood; that is, the experience of being a person in a world where there is a God. His practice has synergies therefore with Siedell’s citing St John of Damascus in identifying humanity as the ‘place in which the visible and invisible creations, the tangible and intangible creations, are linked together.’ 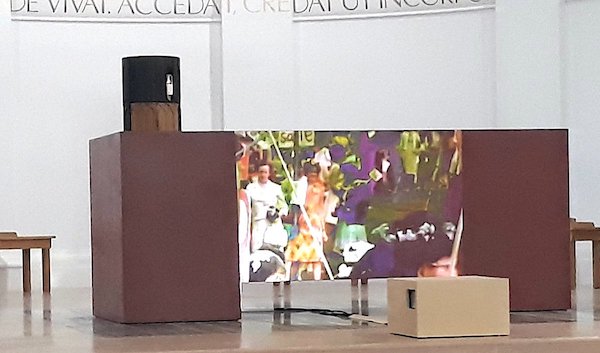 In 2017 Dean began to incorporate actual altars into his work when his 14 Stations of the Cross videos were projected onto the Henry Moore altar in St Stephen Walbrook church during an all-night Easter vigil. With Color Motet (2019) he is projecting onto a relatively new altar, in blood red Venetian plaster, created by the ceramicist Julian Stair as part of the re-ordering of St Augustine’s Hammersmith. The RIBA award-winning refurbishment of the church was undertaken The Order of St Augustine as the first phase in redeveloping its headquarters in Hammersmith. Fr Gianni Notarianni, parish priest and artist, commissioned the architect Roz Barr together with craftspeople and designers such as Stair and John Morgan to transform the building. Stair’s altar now sits below a large cast iron circular light fitting surrounded by a hand-painted fresco incorporating gold leaf on the rear wall of the altar.

Dean’s piece is a new video and sound work which combines film extracts of Sister Corita Kent’s pop art Mary’s Day celebrations, with footage taken from wedding videos where people are fainting. Additionally, Thomas Tallis’ 40-part Renaissance motet plays over them. The work continues the artist’s investigation into the liturgical potential of his artworks, in this instance with video functioning as an altar frontal.

A motet is a polyphonic sacred choral composition, usually unaccompanied, in which ‘the fundamental voice (tenor) was usually arranged in a pattern of reiterated rhythmic configurations, while the upper voice or voices (up to three), nearly always with different Latin or French texts, generally moved at a faster rate.’ Dean’s piece is also polyphonic as it fuses and collages its two videos and mixes two versions of Spem in Alium – Tallis’s motet and a plainchant setting of the same text:

I have never put my hope in any other
but in Thee, God of Israel
who canst show both wrath and graciousness
and who absolves all the sins
of humanity in suffering
Lord God
Creator of Heaven and Earth
Regard our humility

It is likely that Tallis designed Spem in Alium ‘to be heard ‘in the round’, with the audience seated within a circle of singers.’ ‘Beginning with a single voice, the composer deploys as many effects as he can, displaying a mastery of counterpoint and scoring all 40 voices together at four key moments.’ Similarly, the Mary’s Day processions organised by the art department of the Immaculate Heart of Mary school in Los Angeles and led by Sister Corita Kent were designed to be immersive happenings. Such immersive liturgical rites can be overwhelming, as with Dean’s second video in which people faint or collapse during services. Colour Motet celebrates such rites and the connection between heaven and earth, the human and the divine, that they attain.

As a priest, Dean mediates between creation and Creator. Alexander Schmemann has asserted that the priest: ‘stands in the center of the world and unifies it in his act of blessing God, of both receiving the world from God and offering it to God—and by filling the world with his Eucharist, he transforms his life, the one that he receives from the world, into life in God, into communion with him.’ With Stations of the Cross, Stations of the Resurrection, Pastiche Mass and now Color Motet, Dean is exploring the extent to which his art can also become a ‘place in which the visible and invisible creations, the tangible and intangible creations, are linked together.’

Colour Motet is exhibited by Austin Forum as part of the HF ArtsFest (Hammersmith & Fulham Arts Festival). Austin Forum aims to re-establish a strong and creative relationship between the Catholic Church and the Arts, especially within contemporary visual art. In the twentieth century, the Catholic Church invited its members to “read the signs of the times”. In response to that, Austin Forum is working with artists whose artistic expressions say something about the world and the human condition today. Austin Forum celebrates the creativity and practice of emerging and established artists and invites them to engage and respond to the sacred space, thereby enhancing worship and contemplation in the church.