Having just opened an exhibition devoted to the work of William Blake, who is, for all his eccentricities, a representation of art as we used to know it, Tate Britain has now – with one suspects a corporate sigh of relief – returned to a genre now increasingly beloved by major museums of contemporary art. Which is to offer, not a selection of physical objects that in one way or another claim to be art, but art as an intangible – a magical experience. The title of Mark Leckey’s show at the gallery offers more than just a clue. It is called O’ Magic Power of Bleakness. Knowing that you can’t say if you go there that you haven’t been warned. To quote the old rhyme: “The other day upon the stair/ I saw a man who wasn’t there…” Except that, in this case, the human presence is often somewhat diluted. Though it is not, to be fair, entirely absent. You go into a large, darkened space, and various images flash in front of you.

A magical journey sure enough, but one of a dispiriting kind – ELS

The techniques used are, in some ways contemporary – video and all that. In other ways, they are surprisingly old-fashioned. Spectral images appear thanks to a technique called Pepper’s Ghost. As an Internet site devoted to this illusion points out: 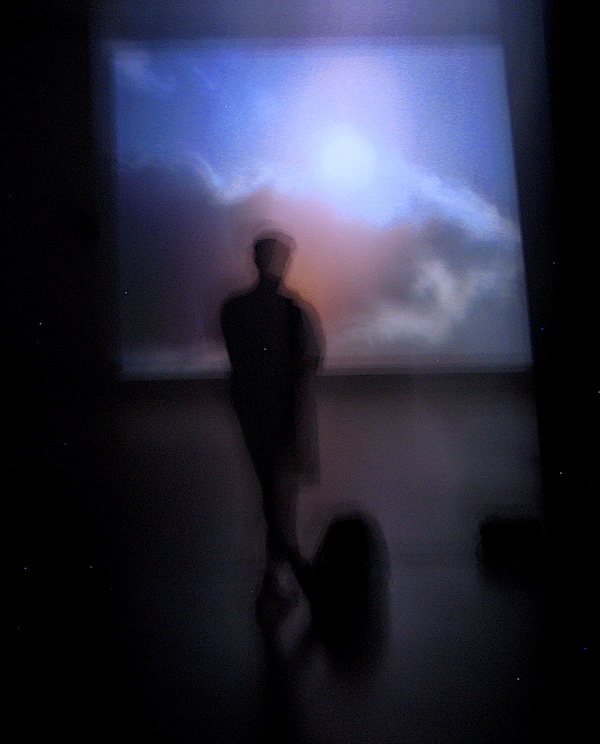 “The basic principle of what is now referred to as ‘Pepper’s Ghost’ can be traced to the mid-16th century and was explained by the Neapolitan scholars and scientist Giambattista della Porta. His book Magia Naturalis (‘Natural Magic’) describes using a pane of glass to reflect an object positioned behand an observer in such a way that it appears to be in front of the viewer.”

In the mid 19th century John Henry Pepper, a chemist and honorary professor at the Royal Polytechnic in London found a way of making use of this for theatrical effect by angling the glass at 45 degrees towards the audience, locating the ghost or ghosts in a specially constructed setting. After a period of popularity on the Victorian stage, the technique found a home in circus sideshows, particularly being used for an act called ‘Girl to Gorilla’:

“Spectators would gather in a darkened tent and watch as a young girl slowly changed into a gorilla. The ape would invariably burst out of his cage and chase the attendees, ensuring an exciting finish.”

Standing there in Tate’s darkened space, I confess I thought: “Banksy, where are you? – You’ve already done the House of Commons as a tribe of chimpanzees, why not something like this?” I could have done with something a bit more exciting than what I was being offered.

A revival of Pepper’s Ghost isn’t everything the exhibition has to offer. It has large-scale projections of two of Lecky’s earlier works, Fiorucci Made Me Hardcore (1990) and Dream English Kid, 1964 – 1999 AD 2015. As the exhibition notes tell one, “Fiorucci is a compilation of footage from dance floors chronicling Britain’s underground club scene from the 1970s to the 1990s.”

That does seem a long time ago now. The YBAs were still genuinely young in the 1990s, and they were rampaging teenagers before that. Boris charging towards Brexit was a vision or a nightmare yet to be imagined.

The show is a magical journey sure enough, but one of a dispiriting kind. It isn’t really to the point, and it isn’t magical enough. Armed with modern technology, the Victorians would have done better.