The London Jesuit Centre and Farm Street Church currently have a marvellous exhibition of icons by Dr Irina Bradley, one of the leading iconographers in the UK. With 75 works on show, this a substantive overview of Bradley’s work and includes a new icon of St Magnus Erlendsson based on the recent facial reconstruction of the saint, which in turn drew on photographs from the 1920s of what is said to be the skull of the 12th Century Norse earl.

Before beginning work on the icon of St Magnus, Bradley made a pilgrimage to St Magnus Cathedral in Kirkwall in Orkney to allow her to connect with the saint. While working on the icon she felt it was as though the saint was staring into her soul. While in Kirkwall, she was also allowed to examine a representation of the family tree of St Magnus and was surprised to discover that the saint and her husband share a common ancestor. 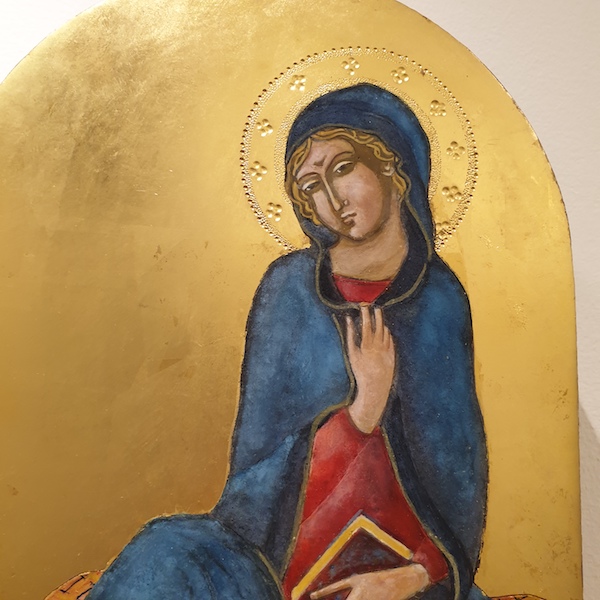 ‘The Annunciation’ (detail) by Irene Novelli

Bradley’s icons, like all traditional icons, are created as prayerful meditations which focus on the transformation that takes place in the souls of the faithful; hence the exhibition’s title ‘Metamorphosis.’ Irina is an orthodox Christian herself and follows the tradition of icon painters from the past, who fast and pray while making their works of art. Often seen as historical art, Irina is creating contemporary icons which keep the art of iconography alive while remaining true to its principals.

She is not alone, as I discovered during a study visit to the parish of Kristinehamn in Sweden in 2005 with St Margaret’s Barking, when the church was presented with an icon of Christ blessing the children by the Swedish-Norwegian iconographer Kjellaug Nordsjö, widely considered one of the best icon painters in Scandinavia. The return to the actual painting of traditional icons in the twentieth century was, according to contemporary iconographer Aidan Hart, initiated by iconographers such as Photius Kontoglou, Sister Yuliania, Leonid Ouspensky, Fr. Gregory Kroug and Archimandrite Zenon. Erland Forsberg initiated a revival of interest among Lutheran churches in icons, of which Nordsjö was part.

Alongside this interest in traditional icons, there have also been significant artists who have taken a more modern and personal approach to icon painting; perhaps the most significant being Jerzy Nowosielski, a Kraków-born Polish painter, graphic artist, scenographer, and illustrator. Nowosielski became well known for his wall paintings, iconostases, and polychromies in the Orthodox Churches of Kraków, Białystok and Jelenia Góra, the Roman Catholic Church of the Holy Cross at Wesoła, the Franciscan Church in the Azory district of Kraków, and the Greek Catholic Church in Lourdes. He also designed and erected the Church of the Birth of the Blessed Virgin Mary in Biały Bór.

Alongside icons featuring traditionally conceived images of the saints present in Christian worship, he introduced a new category, ‘secular icons,’ believing that ‘all art is sacred in some way.’ His work also introduced an element of darkness to sacred paintings, leading to the accusation that his work did not have the ‘light of Byzantium’ that is so typical of traditional icons. A Polish art critic called him ‘the most secular religious artist and the greatest theologian among secular artists.’ His work can currently be seen in ‘Theatrum Jerzego Nowosielskiego’ at the State Art Gallery in Sopot and an exhibition of ‘Works from the Starmach Collection’ at the Starmach Gallery in Kraków.

Last year saw a First Biennale of Christ-centred Art held in Moscow with the blessing of His Eminence Hilarion, Metropolitan of Volokolamsk. The Biennale exhibited 150 works by 67 artists that created a dialogue between works of church art and contemporary artworks from a wide range of artists. One strand of the Biennale focused on ‘author’s icons,’ a term first proposed by the Russian art critic Irina Yazykova in 2015. Viktor Barashkov has explained that this term ‘points to the difference between the rendition of an icon by one master and another, which means that the icon can be made in a personal manner, a unique artistic style and can be based on the author’s own interpretation of the image.’

Among those exhibiting was Alexandr Tsypkov, who has recently been interviewed by Christian Century. Tsypkov is part of a group of artists called After Icon who, as Jason Byassee writes, beautify ‘abandoned buildings in Russia with ancient Christian images.’ The innovation of Tsypkov’s work, and that of his fellow artists in the After Icon project, is to create icons in ‘”secular” spaces—on rubble, trees, street corners, and the like, alongside fellow graffiti artists.’ 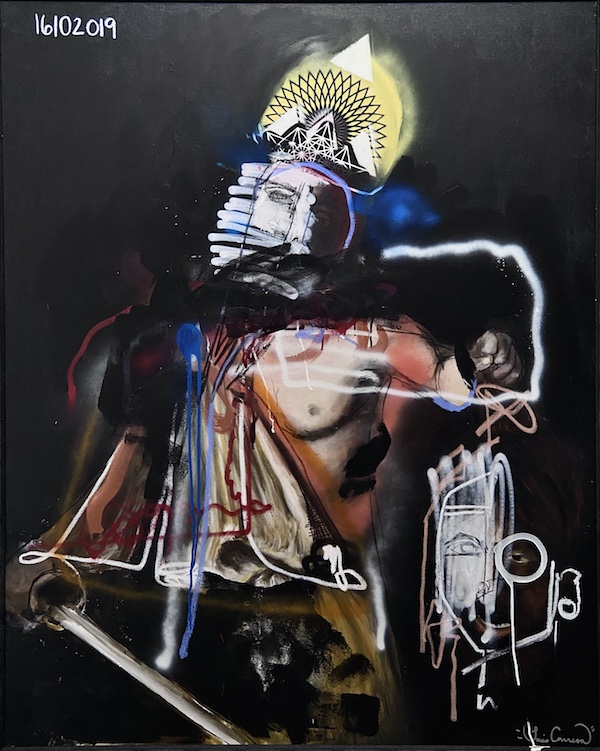 ”David vs you’ by Louis Carreon

Another street artist bringing a distinct and different perspective to the religious art of the past is Louis Carreon, who says he is ‘speaking to those who are awakening on a spiritual journey.’ Carreon has a solo show opening in Mexico City in February as part of Zona Maco and riffs off imagery appropriated from El Greco, Bernini, Rubens, and Caravaggio, among others, to disrupt and re-present images of the greats in ways to which young people can relate.

Finally, in this review of current views on contemporary icons, there is the modern sense of icon as it relates to celebrities or influencers. ‘Oh, Marilyn!’ at Gazelli Art House draws on the 60th anniversary of Marilyn Monroe’s death, arguing that her death represented a departure point for female empowerment in order to then present a group exhibition dedicated to the 60s wave of female emancipation in the UK and US. Works by Pauline Boty, Judy Chicago, Penny Slinger and Jann Haworth depict a time of change and rebirth of perception and acceptance of a new and different female role within society.

Pauline Boty was a founder of British Pop Art and one of Britain’s most notable Pop Art painters. Like Andy Warhol, she recycled publicity and press photographs of celebrities in her art and painted her idols, including Elvis and Marilyn Monroe, in works that often refer to female sexuality as well as current affairs, criticizing the nature of the ‘man’s world.’ However, in ‘Angel’, one image from this exhibition, she gives us a beautifully encircled image of a resting angel which could hold its own in any illuminated Bible.

Another icon’s death is remembered in the forthcoming exhibition at Ken Griffiths Bureau; that of HRH Princess Margaret 20 years ago. Griffiths’ photograph of the Princess holding an embroidered pillow with the words ‘It’s not easy being a Princess’ was unseen until the Princess’ death on 9 February 2002, when it appeared on The Telegraph’s front cover. 22 national and international artists were invited to reinterpret this iconic photograph for this exhibition in line with their own vision and style, exposing a different narrative which they have carved from beneath the picture. 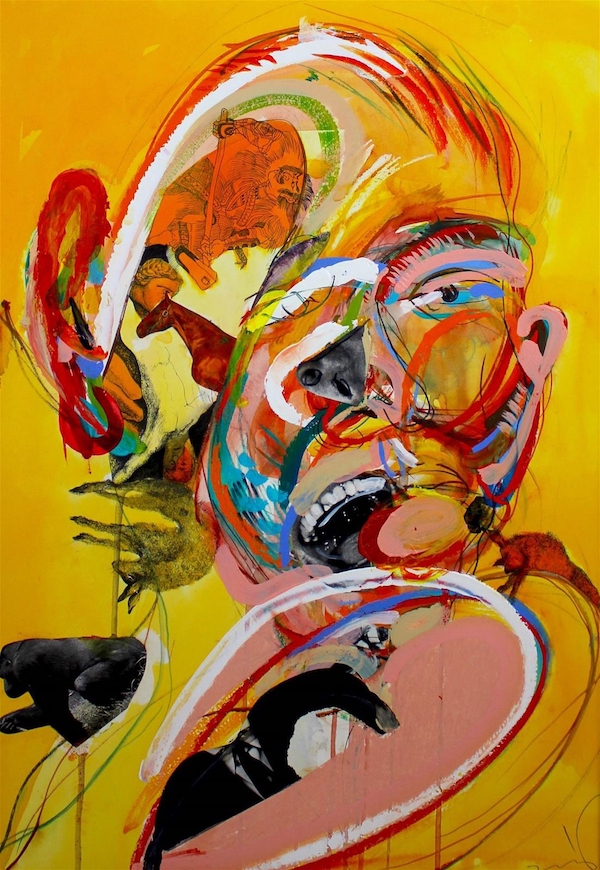 Among them is Zi Ling, a visual artist based in Bristol who is the daughter of Chinese painter HuiTao Lin, a pioneer of the 85 New Wave Movement. She uses watercolour and collage as her method, finding this the most organic and direct way of expressing herself. She finds emotional moments from photographic images as inspiration, then trusts her intuition when making marks. She enjoys the balance between the controlled and the uncontrolled, making your own marks on paper and playing with the ‘accident.’ She thinks each portrait is a result of whatever truth one feels at the very beginning. Colour represents different personalities and realities.

She says: ‘Truth’s float around us invisibly, illuminating my own way with them through the surrounding reality. I paint as I feel, not as I see. I paint confrontations which take place between the truth and my fantasy. Through this journey, I was unconscious, I was lost, I was found.’​

In this way, we end this overview of current engagement with icons with work that is at the opposite extreme to where we began and yet each, whether working within a canon or following intuition, finding a path to the understanding expressed by Alexandr Tsypkov in his Christian Century interview that the ‘task of an icon is to constantly remind a person of themself.’