Desire is at the basis of most human behaviour from sex and procreation to the pursuit of beauty and death. According to Freud our psyches see-saw between the two conflicting points of Eros and Thanatos. Mat Collishaw has always been interested in origins and in what goes on behind the veil of social givens and norms. He understands that what enchants also ensnares, that the sublime is bedfellows with the abject. Whether taking on subjects like an inmate’s last meal on death row or crushed butterflies, there’s always a formal Gothic beauty to his haunting work, even when dealing with the most profane of subjects.

He understands that what enchants and also ensnares

In 2011 his installation, Shooting Stars, appropriated found images of Victorian child prostitutes in vulnerable, yet alluring poses, projected onto the gallery walls. Fired onto phosphorescent paint they flared briefly before fading from view, suggesting fragile lives cut short by violence and disease. Not only did the installation underline his interest in history and the complex truths behind its public facade, but it also signalled his interest in photography.

This spring he has turned his attention, once again, to photography with a new exhibition, Thresholds, at Somerset House from 18th May- 11th June, which will celebrate the work of the early photographic pioneer, William Henry Fox Talbot. Although a member of the YBA generation Mat Collishaw has never favoured easy irony or the sassy one-liner. His work is informed by research, an interest in the past and a search for existential meaning.  Using cutting-edge VR technology he’s created a virtual reality portal back into 1839, when Fox Talbot, the British photographic pioneer, first presented his innovative photographic prints to the public at the King Edward’s School in Birmingham, a high Victorian edifice designed by Charles Barry and Augustus Pugin.

Visiting Mat’s Collishaw’s south London studio, housed in an old pub, to see the installation, I donned headset and goggles to be immediately transported not only to a different city and century but, to experience in full sensual detail the architectural features of the original room in King Edward’s School. There were the vitrines containing Fox Talbot’s light-faded prints, the glass cases full of scientific instruments, even the heat and sound of a coal fire burning in the grate. Infrared sensors tracked the movements of others in the room. These ghostly avatars not only stopped people bumping into one another but also enhanced the feeling of travelling back through time, conjuring the countless dead who have inhabited the space. 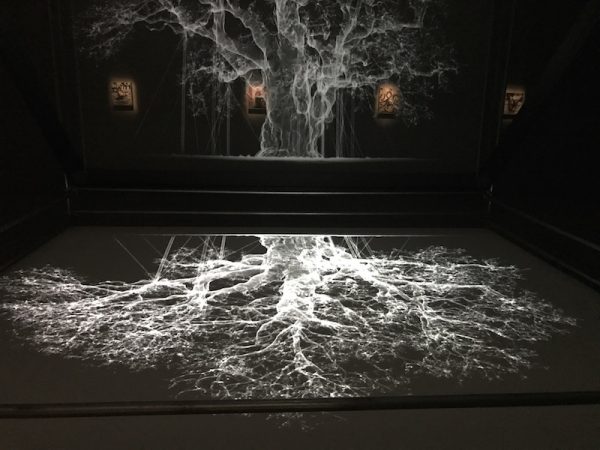 Staged by the British Association for the Advancement of Science, the aim of the original 19th exhibition was to promote technological innovation. This was met by riots from Chartist protestors in Birmingham’s Bullring. Frightened, angry and discombobulated by the rise in these new-fangled technologies, the Luddite riots reflected the uneasy economic split that was beginning to occur between old crafts and new industry.  As I looked out of the ‘window’ of the virtual room into the virtual streets, policemen in white trousers were marching back and forth as Chartists with swords, pikes and flaming torches gathered and shouted, throwing eggs at the window. It was hard, during this immersion, to escape the parallels with today’s politics, where increasing unemployment is being generated by new technologies that render numerous jobs obsolescent. That many, today, blame ‘experts’ and the ‘intellectual elite’, seems little different to the emotions motivating the crowd hurling insults at Fox Talbot and his scientific friends ensconced in King Edward’s School.

The atmosphere in the virtual room was palpable. Moths flew towards the light of the chandeliers, a reference to the presence of moths in Collinshaw’s previous work, as well as a metaphor, perhaps, for the self-destructive behaviour of the Chartists. The virtual vitrines, full of new-fangled technological instruments, such as magic lanterns and microscopes, only served as a reminder of the inevitability of technological advance. Within this informed and innovative work, Collishaw has created layers of reality. A historic palimpsest where those outside watch those inside, as they, in turn, look back into the past at a painting of King Edward as a child.

Until the 27th May, Mat Collishaw is also showing work at Blain Southern. In The Centrifugal Soul, he draws, yet again, on forms of illusion and truth. Working with the evolutionary psychologist, Geoffrey Miller – who believes that the origins of art stem from natural instincts of courtship and reproduction – he has created a zoetrope with stroboscopic light that animates the mating rituals of bowerbirds and birds of paradise and emphasises our insatiable appetite for exotic visual stimulation.

On the walls of the gallery are 12 trompe l’oeil paintings of British garden birds –blue tits, bullfinches, sparrows, and a robin – all tethered by small golden chains to their perches in the manner of Carel Fabritius’ The Goldfish (1654) – also the subject of Donna Tartt’s prize-winning novel of the same name. Set against the graffiti-tagged walls the birds struggle to differentiate themselves from the manmade decoration that seems to confuse their sexual signalling.

Central to the show is a mythical new installation: Albion that takes as its subject the Major Oak in Sherwood Forest, Nottingham. With its hollow core, the centuries-old tree has, since the Victorian era, had its spreading branches supported by a system of scaffolding and been voted Britain’s most loved tree. Legend has it that was here that Robin Hood took shelter with his band of Merry Men. Weighing some 23 tonnes, it has a girth of 33 feet and a canopy of 92 feet and is estimated to be between 800-1000 years old. Albion is a literary term used for Britain, particularly England in ancient times.  A name made famous by the complex mythology of artist, poet and seer, William Blake. The word is presumed to be of Celtic origin and related to the Latin albus ‘white’ (an allusion, perhaps, to the white cliffs of Dover). Beautiful, evocative and ghostly, this iconic work subtly asks questions about what it means, in these post-Brexit times, to be English, if the concept continues to have any validity.

Employing a diversity of media, Mat Collishaw continues to make work that is fresh, meaningful and insightful. Using the latest technological innovations he asks complex and prescient questions. It might have taken him a while longer to come to prominence than some of the other YBAs but the slow burn has been well worth it.