The artist’s studio is both a practical workshop and the workshop of the mind, a place of reflection and play, of doubt and hard work. At first a modest collector of modest means, Matisse filled his studio with objects collected on his travels to create a stage-set of languid sensuality, returning to the same paintings, prints, sculptures and textiles for inspiration over and over again like old friends, each time finding new points of stimulation. It was in 1917 when he moved to Nice that he began to feel frustrated with the lack of sensuality in his work. Nice provided the perfect backdrop for a reappraisal. His purpose became “to render my emotion. This state of soul is created by the objects that surround me and that react in me: from the horizon to myself, myself included…I express as naturally the space and the objects that are situated there as if I had only the sea and the sky in front of me; that is to say the simplest thing in the world.”

There’s an alchemy created by the objects he collected. The Roman torso, the African masks, and Chinese porcelain were the props he used to explore the theatre of his creative imagination.  Walking around this wonderful exhibition at the RA I was reminded of another famous room full of oriental and African antiquities, Freud’s study. Freud too had a passion for collecting, seeing archaeology as a metaphor for psychoanalysis. For Matisse, the ‘primitive’ art of Africa and the Orient gave him a means of escaping the strictures and academicism of Western culture. The practice that dominated in the École des Beaux-Arts, at the time was dominated by copying and an illusionistic realism. African art seemed to offer spontaneity and sensuality, hedonism and authenticity. The objects Matisse collected from Asia, Africa and the Middle East emphasise Modernism’s global reach. Without colonialism, there may well have been a very different form of Modernism. For despite the gorgeous abstract patterning and sensuality of colour, so essential to our narrative about western modern art, Matisse (and Picasso) really understood very little about the cultures from which they were appropriating objects, about the lives and traditions of the faceless makers of these artefacts. For Matisse tended, as did other western ‘Moderns’, to homogenise non-Western cultures in ways that now seem both essentialist and politically incorrect. Often the relationship between pornography and the ‘primitive’ was uncomfortably close. Yet African and Oriental art was to provide energy, vitality and new ways of seeing that changed the face of western art.  His nudes bristle with languid sensuality and sexual energy. What he created were works not only of delicious colour and abstract design but ones that perhaps, inadvertently, emphasised racial, sexual and cultural difference.

Matisse believed African art offered access to hidden realms of human individuality, that it somehow tapped into a “deep gravity.” The African masks he collected thus had a profound effect on his own portraits, where he simplified and peeled away layers to get to, as in the case of Marguerite 1906-7, or the 1913 Portrait of Madame Matisse with its empty mask-like eye sockets, to the subject’s ‘true’ self. While the richly patterned textiles he collected allowed him to create theatrical mise-en-scène, full of chromatic intensities and kaleidoscopes of decorative patterning in which perspectival space dissolves around his Odalisques. 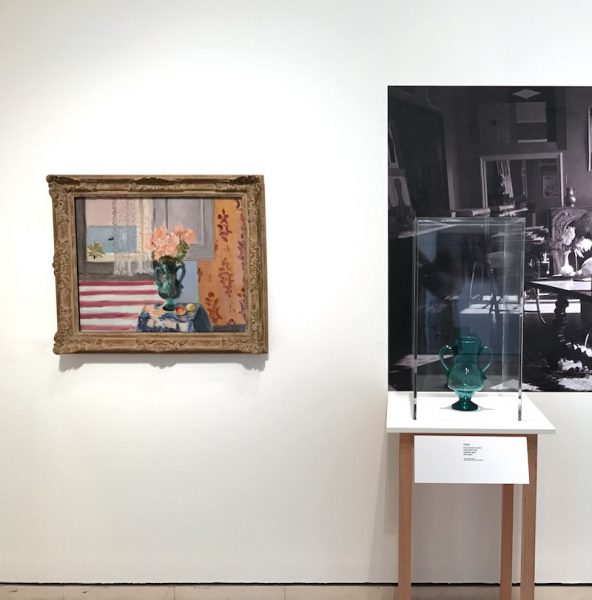 In Vase of Flowers, 1924, which includes as its centrepiece the green Andalusian glass vase purchased in Granada in the winter of 1910-11, also included in this exhibition, we find a number of Matisse’s favourite motifs: the open window, the sea and sky, a vase of flowers, patterned wallpaper, a striped cloth, and a net curtain flapping like a translucent veil emphasising the boundary between inside and out. The vase not only functions as a ‘souvenir’ of his travels but underpins memories of the Islamic interiors that had so impressed him on his visit to the Alhambra on the same trip. This sublime painting, full of Mediterranean warmth, air, and light, captures the prelapsarian mood created within his studio with its tapestries and paintings, flowers and furniture, such as his favourite Venetian chair that he painted on numerous occasions.  But his studio was not only a sort of lost Eden but ‘a working library’ of objects that had an almost anthropomorphic relationship one with the other. “To copy the objects in a still-life is nothing; one must render the emotion they awaken…” he said. The object became an ‘actor’, so that his much-loved silver chocolate pot is alive to its neighbouring objects whose reflections are caught shimmering in its rotund belly. Based on dialogue and connection these objects cannot be seen in isolation but reflect an almost human sympathy one with another. The ‘reality’ is no longer a purely visual one, arrived at by copying. The object has become an emotional vector. As for Freud, Matisse’s objects reflect an inner mental and emotional reality.

From 1906 still life became the focus of interest in Matisse’s decorative painting, which played with a concept of ‘democratic’ all-over space as in his Interior with Young Girl Reading 1905-6. This approach was influenced by his interest in Islamic art and Oriental aesthetics. This is immediately evident in the blue arabesques of Still Life with Blue Tablecloth, 1909. “It’s the relationships that interest me – me, my model, this or that object”, he wrote, “they all form little worlds that have to be in tune.” Yet unable to find a satisfactory solution to bring together diverse objects in a single composition, he cut out coloured shapes, which he moved around and held with pins. 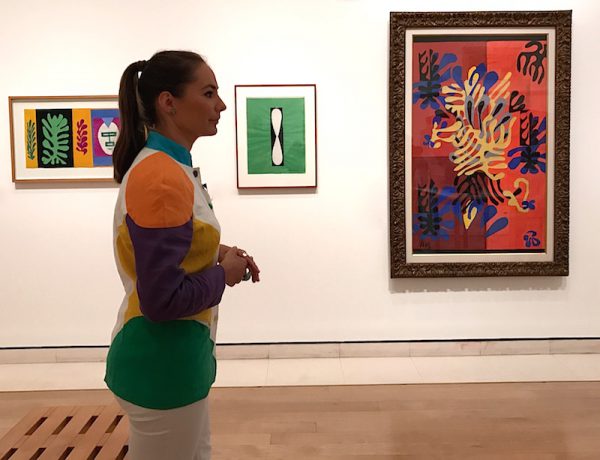 During the mid-1930s Matisse’s art underwent a radical transformation, in which drawing played a crucial role. Here the energy seems to flow so that people and things appear to float within abstract space, rendering everything of equal weight and value. This dynamic freedom was further explored within the suggested rectangular grid cut-outs such as Panel with Mask, 1947. As he said in 1951 the cut-out became, “the simplest and most direct way to express myself.” With these flat, bright forms he created a series of signs, dependent not on the recognition of an object but on the emotional charge created through shape and colour.

The beauty of this exhibition is that it can be enjoyed simply as a box of sensual delights in which we can wallow in these wonderful paintings full of light, pattern and colour, or we can begin to unpack some of the debates around the origins of ‘modern’ western art. However we choose to look at it there is a greedy hunger in Matisse for the sensory, for the life affirming. It’s this appetite, this passion that he had till the end that makes him so irresistible.

Matisse in the Studio RA Until 12th November

Sue Hubbard is an award-winning poet, novelist and freelance art critic. Her new novel Rainsongs is due from Duckworth in January 2018.