Maurizio Cattelan’s ‘Victory is Not an Option’ is a perfectly timed exhibition that parodies Britain’s long slide into populist self-destruction.

The show is set against the golden limestone of Blenheim Palace – Churchill’s birthplace – and a monument to one of the country’s great victories: John Churchill over Louis XIV of France at the Battle of Blenheim. But the Italian conceptual prankster’s work doesn’t make us laugh at the British upper-lip as it begins to tremble, or the thankful decline of empire, but instead solemnly evokes the country’s current collective-split-insanity, and the death knell of our democracy.

As the viewer enters Blenheim’s central courtyard, they are met by the eponymous work ‘Victory is Not an Option’ 2019, an ‘x marks the spot’ constructed out of huge union jacks, dissecting the Great Court; a large populist carpet, or perhaps a ‘plebiscite crucifixion’ – would be more apt. 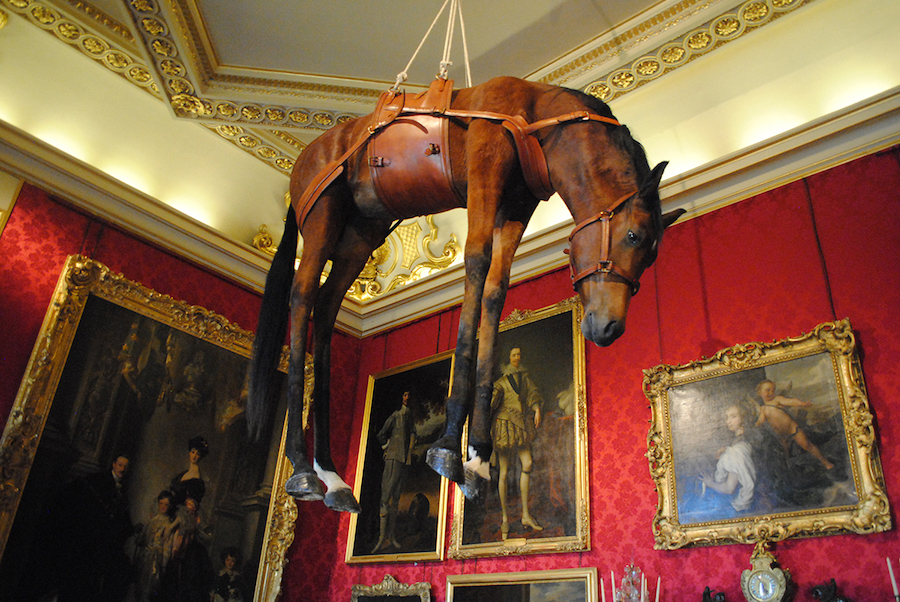 Ambling down the corridors of power, discovering the artist’s juxtaposed political gems, the viewer is met with ‘Novecento’ (‘Nine Hundred’), 1997, Cattelan’s Taxidermy horse, which literally hangs in the Red Dining Room, lifeless among the baroque works of art. The slumped steed seems like a metaphor for a country currently flushing itself down the gold toilet. Well, it would be, if not for the recent theft of Cattelan’s ‘America’, the artist’s 18-carat solid gold bog, stolen from Churchill’s lavvy in a pre-Brexit punch line smash-and-grab, that only serves to highlight the Italian joker’s view of our ridiculous decline.

In fact, the viewer would have had a three-minute opportunity to sit on the gold throne – and use it – but sadly, after the recent ‘Italian job’, this is no longer the case. But one can still imagine a foppish golden-haired PM seated in the mahogany-paneled toilet, shitting on Churchill’s European legacy, and the very nature of the democracy that he stood for. 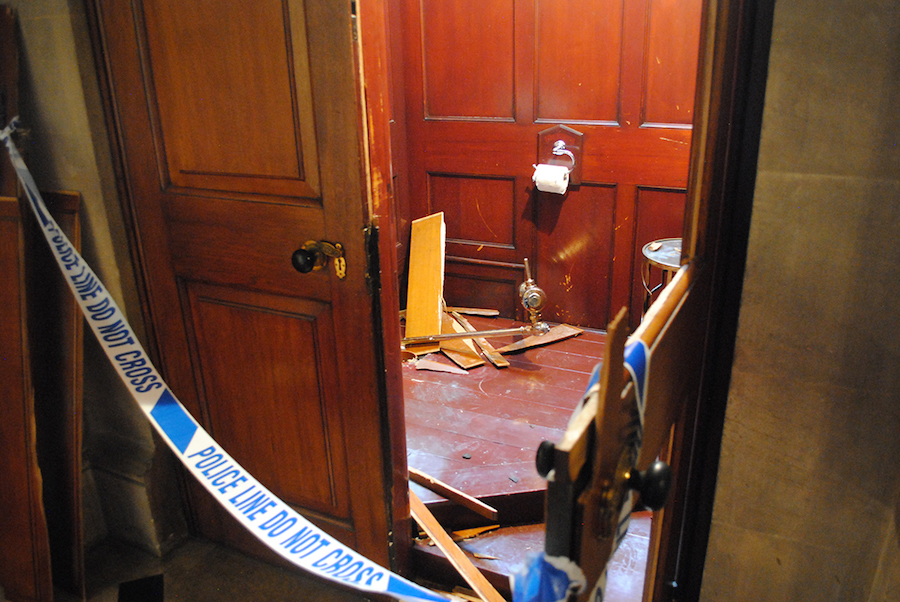 But instead of the opportunity to try out the throne, someone nicked the gold loo in a pre-Brexit financial pre-empt, presumably to put under the mattress for that October 31st rainy day; leaving the broken plumbing as an accidental metaphor for a democracy that’s leaky and no longer functions. 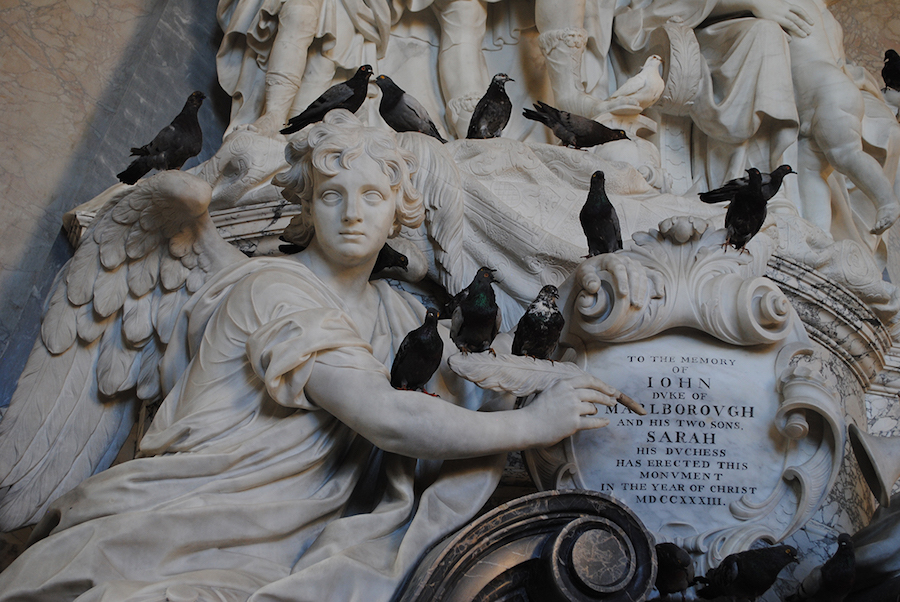 When entering Blenheim’s private chapel the death knell of that leaky democracy ironically ceases, the solemn space is host to a large flock of pigeons, ‘Others’, 2011, perching on the tomb of John Churchill, as a homeless man sleeps in one of the pews and empire rests eternally, Cattelan’s humour is partially restored.

Finally, the Long Library has a surprise that a young Churchill may have found prescient, as a solitary kneeling figure in prayer meets the viewer before Blenheim’s grand organ. The work ‘Him’, 2001, is a homunculus Hitler, as a dewy-eyed schoolboy, in prayer for what? – We aren’t sure – but one has the dreadful feeling that his prayers are finally being answered on a global scale. 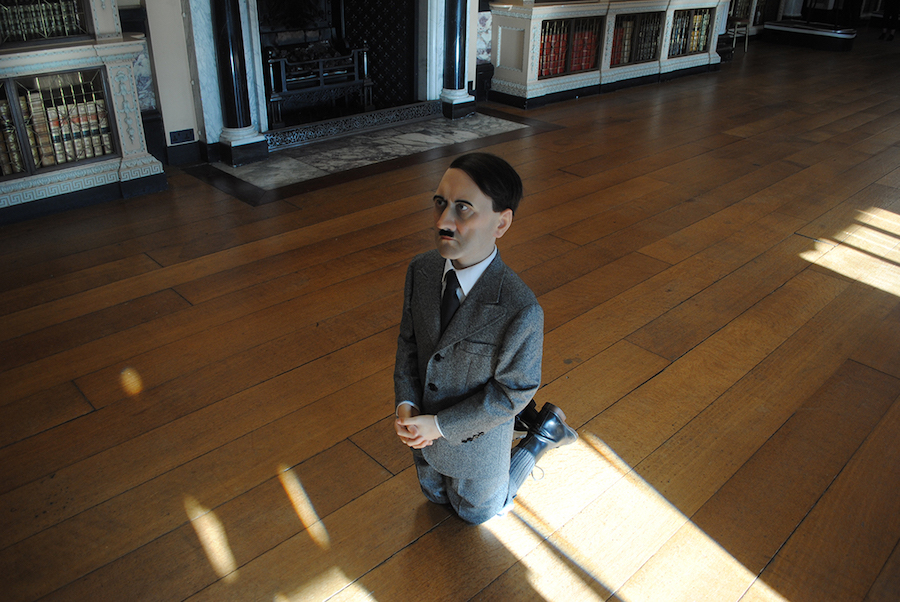 Cattelan’s exhibition builds into a biting satire on current political events, and unusually – when viewing works by the prankster artist – this time I don’t know whether to laugh or cry.

In a world where a fake-Churchill suspends parliament and tries to crash us out of a Europe that Winston helped to defend, Cattelan’s little Hitler need pray no longer, because it would seem Britain’s finest hour has passed down the artist’s solid gold u-bend.

Maurizio Cattelan, Victory is Not an Option – Blenheim Palace, Oxfordshire – 12 September to 27 October 2019