The Michael Andrews show currently at Gagosian’s Grosvenor Hill Gallery offers a series of paradoxes, some perhaps intended by the gallery, others maybe not. It presents the artist (1928-1995) as a now half-forgotten figure, whose once substantial reputation has been overtaken by that of a number of his contemporaries.

Though his paintings belong to a number of major collections: the Tate; the Metropolitan Museum in New York; the National Gallery of Victoria, Melbourne; the Museo Thyssen-Bornemisza, Madrid; the Calouste Gulbenkian Museum, Lisbon; the Scottish National Gallery of Modern Art, Edinburgh; the National Museum of Australia, Canberra – this is the first retrospective to have been seen in London since a show at the Tate in 2001, and it is taking place in a commercial gallery, albeit a very grand one, and not in an official museum.

Andrews was a member of the Colony Room Club in Soho, haunt of Francis Bacon, Lucian Freud and other hardcore bohemians

Andrews was a member in good standing of the notorious Colony Room Club in Soho, haunt of Francis Bacon, Lucian Freud and other hardcore bohemians, and the exhibition kicks off with a room called ‘People at Play’ (1962), which offers a crowded group scene with the club as its setting, offering a very  recognisable portrait of Freud and a somewhat less recognisable back view of Francis Bacon. Tucked away beside this, there is another, much smaller compartment, also called ‘People at Play’, containing a number of dinky little portrait heads of no great distinction. These are interesting, if at all, because Andrews made them, but not really as things in themselves.

The real meat of the show is to be found in a series of four big gallery spaces devoted to the themes go ‘Earth’. ‘Air” and ‘Water’. These contain large, technically experimental paintings, often made with the use of a spray gun. The paint is thinly laid on to match the nature of the subject matter. Here. for example, one sees the shadow of a large balloon, complete with basket for passengers, floating across a barren stretch of coast on the edge of the ocean. Other paintings too, but in a more conventional way, depict remote landscapes, and human isolation within them. This is the case with a large painting from 1987, depicting Ayers Rock, in the very centre of the Australian continent. Yet other works depict the kind of wild landscapes in Scotland that delighted eminent Victorians such as Sir Edwin Landseer. One-half expects the Monarch of the Glen to pop up in one of another of the Scottish compositions, just to pay a neighbourly visit. And sometimes any sense of the human presence is entirely missing, deliberately obliterated. This is the case with some paintings of shoals of fish, seen from underwater. 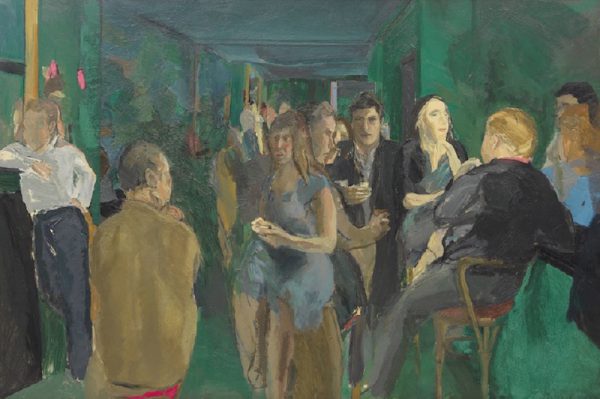 Michael Andrews The Colony Room I, 1962

I suppose what I’m trying to say here is that while this is an enjoyable show, stylishly presented and spaciously hung, giving plenty of elbow row to Andrews’ big canvases, it really doesn’t look like anything that night be called ‘contemporary art’, at least in the sense or senses in which that term is commonly used. Despite the artist’s adroit use of that quintessential contemporary tool, a spray gun, it belongs essentially to the Romanticism of the 19th century. I’ve suggested a comparison with Landseer. An even better, and certainly more flattering one, would be to the late work of J.M.W. Turner. Yet, in an almost literal sense, Turner’s work of that period of his career seems to have more meat on its bones. To mix metaphors, there is more in late Turner for the eye to gnaw at.

What one gets from the exhibition, beautiful as most of it is, is the sense that two linked traditions, first the story of British Romantic art, and secondly the story of British exploration of the world through solitary creative travel, are both coming inexorably to an end. The show represents a coda, not a new beginning.