The Panacea Museum tells the story of the Panacea Society – a remarkable religious community formed in the early twentieth century. For 90 years, its members quietly lived, worked and worshipped God in Bedford while expecting the end of the world. The Society’s members were convinced that God would soon act to bring about a new age – a period of peace and happiness called ‘the Millennium’.

This is a multi-layered narrative exploring religion, technology and art across time and space – JE

The Panacea Society was part of a wider religious movement of groups concerned with prophecy. The Panaceans believed that God was speaking to them through Mabel Barltrop, their leader, known as Octavia. Her followers did not believe she was the only modern prophet; rather, they accepted a lineage of seven prophetic voices since the late 1700s – a tradition they called ‘the Visitation’. 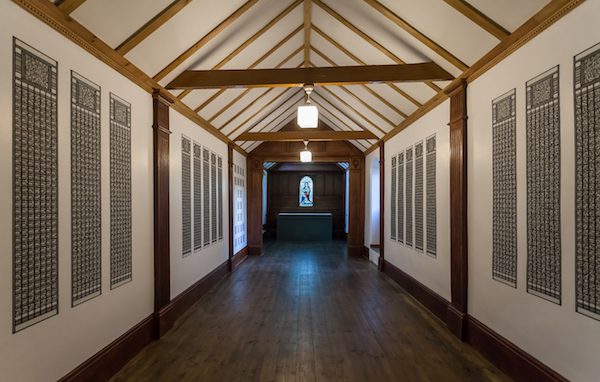 This museum is, therefore, a particularly appropriate location for Michael Takeo Magruder’s digital art exhibition ‘De / coding the Apocalypse’, a visual art exhibition exploring contemporary creative visions inspired by and based on the Book of Revelation. The stunning and thought-provoking artworks in the exhibition use the latest technology to bring various elements of the Book of Revelation to life in ways that are playful and challenging. The word “apocalypse” originally indicated an “unveiling,” and the exhibition investigates our enduring fascination with this seminal biblical text, updating and investigating its aspects.

The exhibition consists of five media installations that are constructed using a range of digital technologies (such as computers, mobile devices, code systems, live data and user interactivity) and physical materials associated with traditional installation, painting, print, video and sculpture. This blending of new and old updates and expands the concepts and contexts that have surrounded the Book of Revelation throughout its history.
Visually, though, the exhibition features the geometrically clean lines of screens, monitors and code. Rectangles and squares abound most notably in the 22 large format digital wall prints which form coded wallpaper along the length of the Panacea Community’s Chapel and most spectacularly in the immersive A New Jerusalem where the text of Revelation as code has been combined with cartographical data from the actual footprint of present-day Jerusalem to take us into a 4D new Jerusalem.

This exhibition was originally developed and displayed in 2014 with Kings College London, where Takeo is based as visual artist and researcher. The exhibition arose from a one-year residency in the Department of Theology & Religious Studies at King’s College, where Takeo spent time in discussion with a range of scholars including sociologists, anthropologists, historians, text scholars, ethicists, philosophers and theologians. 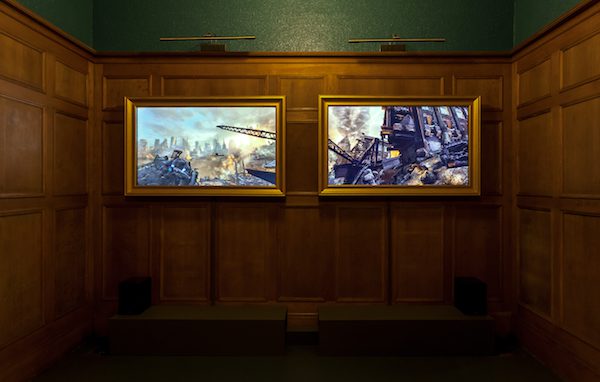 One of five media installations by Michael Takeo Magruder

The result is a multi-layered narrative exploring religion, technology and art across time and space by interrogating perspectives from theology, biblical studies, art history, and cultural criticism. Takeo has produced works in response to specialist “readings” of the Book of Revelation, provided by scholars representing the diversity of sub-disciplines that are typically part of the study of religion. By aligning contemporary art and theological study, the exhibition aims to create new ways of looking at the ancient text and make it relevant for modern audiences.

Takeo has said that he uses individual artworks as ‘the basic building blocks with which he constructs the exhibition’s principal narrative’. For this reason, nearly all his works are designed to be modular and therefore adaptable to the wide range of spaces in which he exhibits; his aim being to create ‘compelling site/context-specific experiences for visitors’. At the Panacea Museum, his artworks are integrated into a building that was specifically adapted and used for the contemplation and proselytization of millenarian ideas. 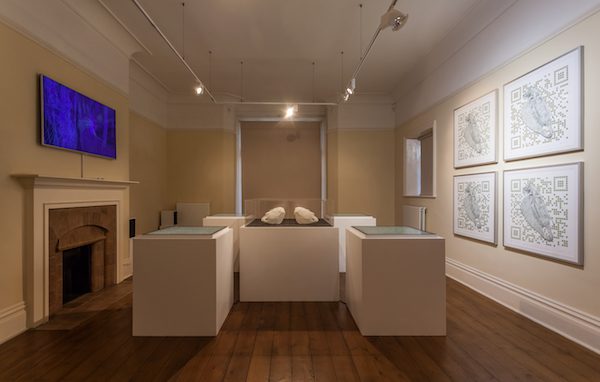 The digital paintings of Playing the Apocalypse serve as the entry point to the room housing a replica of Joanna Southcott’s box. In 1804, Joanna Southcott, believed to be the second prophet of the Visitation, had sealed a selection of her prophecies in a box and declared that it should only be opened in a time of national danger, by 24 bishops of the Church of England. Over the decades, this box was kept safe by her believers, ready for when the bishops requested it. In 1957, the box was bequeathed to the Panacea Society. Its location remains a closely guarded secret to this present day. Thus, contemporary visions of apocalyptic landscapes for last survivors from Gears of War are set alongside sealed prophecies from the 19th century regarding the end of the world.

At the highest point in the building, we encounter the immersive vision of A New Jerusalem which, when viewed using an Oculus Rift headset, provides an astonishing sense of height and depth within a confined space. The Chapel is the most reworked space with its digital prints of coded version of chapters from the Book of Revelation and the altar replaced by a vitrine holding tablets with the same coded images. Despite this radical reordering of the space, original features such as a wall-size mirror also impact the contemporary installation extending the wall prints into infinity.

As the Panaceans knew, the Book of Revelation documents not only the destruction of the current world but also maps out the creation of a new, better one. With this in mind, Takeo says: ‘I think that is good for us to ponder and to imagine—whether we are religious or not—because in this technological age we have so much power to destroy and to bring about our own end. Yet that same technology could/can also bring us hope and salvation. And maybe in that simple fact, a text like Revelation can surface our greatest fears and our greatest hopes and help us to strive towards the positive in the full knowledge that if we get it wrong, it could be the end of us.’