Last Wednesday, before the Frieze frenzy, I attended the opening of the Michelangelo Pistoletto exhibition, “Origins and Consequences” at the Mazzoleni gallery in Mayfair. The exhibition gathered over 20 works spanning from 1958 to 2012 and is curated by Alberto Fiz.

Born in 1933 in Biella, Michelangelo Pistoletto is known as the master of the Arte Povera movement. Since the 1960s, his work has followed his dual interest in conceptualism and figurative representation. In 2003, Pistoletto received the Venice Biennale’s Golden Lion for Lifelong Achievement. He has been included in the Venice Biennale on twelve separate occasions and four iterations of Documenta. His work can be found in significant international museum collections. 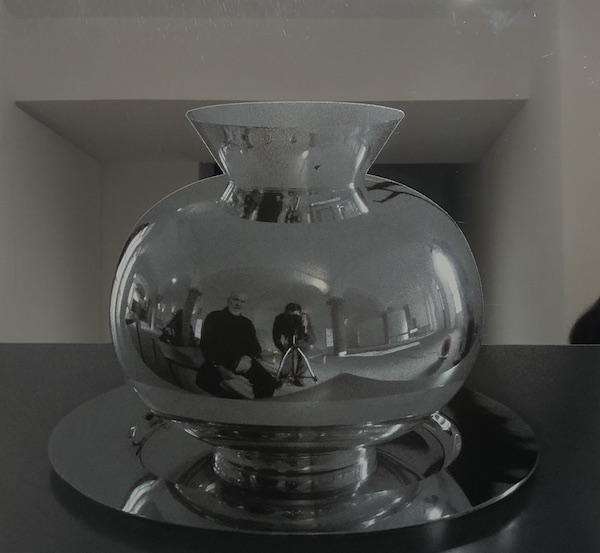 Luigi Mazzoleni, Director of Mazzoleni’s London Gallery, explained to me that the gallery has been collating artworks for over a year from various private collections in order to put together this historical art exhibition. It examines Pistoletto’s early experimental period and sheds light on the techniques that led to his mature work. It features early figurative paintings, works in charcoal on paper, wood, bronze and glass, alongside the renowned ‘mirror works’ silkscreens on stainless steel.

The highlights are the three rare oil paintings on canvas, male portraits produced in 1958 and 1959. These seminal works are ‘the hereditary seat of Pistoletto’s visual language’: his first works to explore the reflective device, the very brink of Pistoletto’s exploration of the mirrored surface. 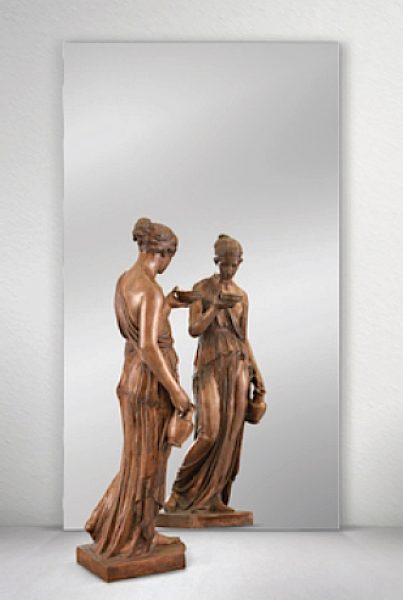 I was thrilled to see in real-life “L’Uomo Nero”, 1959: a painted portrait of a man, the alter ego of the artist, against a black backdrop and four minimalist rows of shelves. It is Pistoletto’s exploration of portraiture and an important precursor to the artist’s series of self-portraits on a reflective black background. The thin elongated head on a black void reminded me of both Alberto Giacometti and Francis Bacon. As Pistoletto pointed out, “Bacon reconsidered the fundamental aspect of the human being, and that was important to me, but he dramatised the image of the person, and that’s where we parted ways, I, too, turned back to the person, but I sought to strip away any drama”.

In 1962, Pistoletto started the use of reflective materials by applying painted and later photographic-silkscreened images to highly-polished stainless steel, the iconic ‘mirror works’. The idea of using mirrors happened by chance when Pistoletto used a mirror while working on a self-portrait. Transparency, reflection, the relation between spatial and temporal, collage, subtraction – the importance of the negative – are key concepts in Pistoletto’s practice. His work emphasises interactivity, spontaneity, and an active relationship between the artwork and spectator.

Pistoletto says of his work: ‘It suggested a double projection, into the wall and out into the space of the viewer. In a way, it integrated painting and sculpture’. This is true of Dono di Mercurio allo Specchio (Mercury’s Gift to the Mirror), 1971, where a bronze statue of Hebe is strategically placed by a mirror and where Pistoletto forces the viewer to stand alongside Hebe, the goddess of youth and enter into a visual dialogue.

In Donna con lampada, 1974, a silkscreen of a photographic image on stainless steel, a technique perfected in 1971, the drama of the piece is heightened by an image of the photographer’s assistant (his wife) holding a lamp. The work is from a series produced with photographer, Paolo Mussat Sartor, Pistoletto’s long-term collaborator in Turin, where the photographer and his wife became Pistoletto’s subjects – a photo shoot within a photo shoot.

The mirrors series has been an on-going project for the artist, a unique piece of work representing different moments of his life, like a diary, a documentation of the artist life. Certainly a must-see.