As we warm up to the summer of re-opens, visiting a gallery during a hang is such a thrill, especially for a themed exhibition with various works by multiple selected artists, in this case, some of the most redolent names of UK art history of the twentieth century. You get to see works by Paul Nash, Edward Bawden, Eric Ravillious, Ben Nicholson propped up against the wall, witness a fragment of the decision-making, as the curator, in this case, art historian James Russell, asks which out of two walls will be the most effective spot for the long, fresco-like painting by Richard Eurlich. And in a gallery such as Hastings Contemporary, already heightened by its unique location on the Stade, the landing place for Britain’s biggest fleet of beach-launched fishing boats.

It feels difficult to write anything that doesn’t sound like a tourist brochure for this show about UK beach life (mostly England and Wales), situated on the beach itself. And as summer comes in, and people are running outside to enjoy the sunshine, getting burnt in the first boiling days of the year, this exhibition is serendipitously catching a collective mood. Serendipitously because the exhibition was due to open last Summer. Covid regulation delays pushed it back and back. Director Elizabeth Gilmore and her team are confident that the show will finally be enjoyed. In the preface to the catalogue, she shares her thoughts on how ‘after months of constrained living, the enduring appeal of the sea, salty air, beaches and resort life has been magnified’ and how Hastings is living through a ‘renaissance of British seaside culture’ with the enforced boom in holidaying on home soil – the staycation. 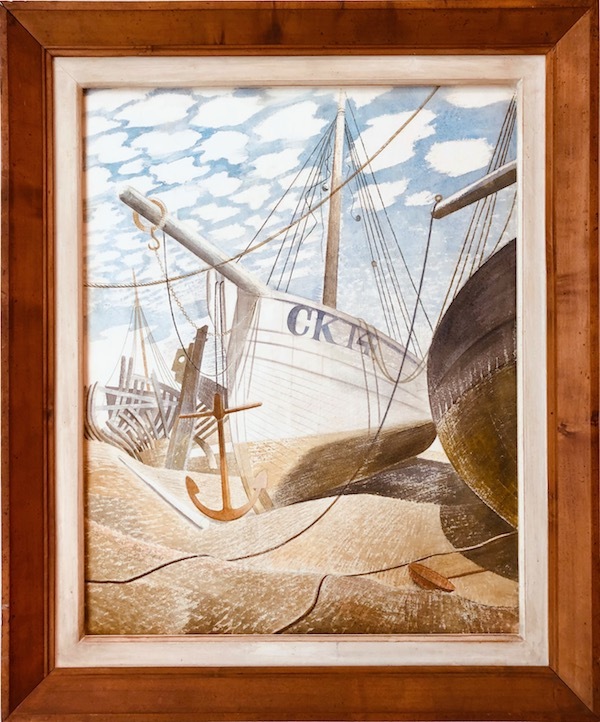 The artists exhibited here themselves travelled to seaside locations to enjoy its particular outdoor experience, waves, salt, vast expanse of sky and let this landscape feed into their visions. Sculpture has a particular life on the shore, with sea moulded rocks, weathered earth and a sense of the liminal beyond the human experience. Here are bronzes by Barbara Hepworth and Henry Moore, sitting patiently on a table protected by an upholstery blanket, waiting to be exposed in their seductive imperfection. The Hepworth is stunning: shell-like, geometric, mathematical, mimicking the forms of nature in particular crustacean architecture. The Moore expresses his love of human female form, curved structure, skin catching the light, the body exposed to the light of day.

Exposed seems an appropriate word. The catalogue contextualises the work with a photograph of Ben Nicholson, Mary Jenkins, Irina and Henry Moore nude on the beach at Happisburgh, Norfolk, in September 1931, sourced from the Tate archive. The picture shows how artists were part of the Naturist movement, tossing off even swimming costumes in a desire to embrace the physical elements and a desire to move outside of society’s norms. Cultural revolution was in the British air, even if political revolution was not. And today, up the coast from Hastings in nearby Fairlight, nudist bathers more simply continue this tradition, in an intimate, unshowy way.

And as the health benefits of sea air, championed in Victorian times, were enjoyed once more after the First World War by everyone, poster, brochures, new designs created by the Modernists invited the public to take a train to the seaside and get out into the water and into the sun. The tourist publicity echoes classical figures and, more particularly, the Renaissance interpretation of classical nudes. Lithographed posters with images by Andrew Johnson and Fortunino Matania show light hitting skin in a tableau of arranged human bodies. The Renaissance interest comes alive in the paintings too – I was stunned by Richard Eurlich’s pale long, studio composed, strange beach figures in which worlds collide in a fantasy image. His work, James Russell pointed out to me, was extremely influenced by Piero della Francesca, known for his serene humanism and much loved by the inter-war Modernists in general.

The success of the exhibition depends upon the intelligent curation by James Russell and his locating of the art within to the social history of the seaside in the twentieth century. This is a history of leisure, of tourism, of recreation and the associated tourisms and ideologies. This is not a history of the trades of the beach, although the fishing community is itself a subject for artists and of visual interest. This itself leads to pictorial documentation. With family from the fishing women of the North East community, we have photos of relatives taken as part of a drive to attract tourists to Cullercoats. As photographic possibilities widened, more families could take advantage of the opportunity to snap themselves for later reflection on their experiences at the coast. Part of the exhibition includes archive photographs, connecting the artists to general trends within the society in which they were operating, a society that did love to be beside the seaside.

James shows me a work by little-known artist Edith Rimmington, an artist new to me. It ties in with the nonsense botany of Edward Lear, which was one of the subjects of the recent community event ‘A Town Explores a Book’. Many of the shop windows displayed posters or works of art relating to this theme, so it feels very inclusive that it has been chosen for special attention for the show. She’s a new artist to me, a poet and artist associated with Surrealism and who studied at the Brighton School of Art. With the extensive Eileen Agar exhibition at the Whitechapel in London, the gallery world is paying attention to women of Surrealism in Britain beyond the more recognisable names of Leonora Carrington. For those interested in digging deeper into this important thread of ‘Seaside Modern’, David Boyd Haycock gives a curatorial overview of the art history of British Surrealism for the exhibition at Dulwich Picture Gallery, which has not been able to open due to Covid restrictions. Read More

Seaside Modern: Art and Life on the Beach, Hastings Contemporary, 27 May – 31 October 2021