Burnt-out domesticity. Chicken-wire with burnt-black wood wedged inside in the shape of the chair. The absence of the people who populated the kitchen who peopled this house represented by the shapes of the different sized seats. There is a dresser on the opposing wall where plates may have been kept. They are theatre sets for the imaginary theatre. Let your mind go backwards, fill the room with the missing — the bombed-out family. The house charred into charcoal.

Amorphous and confused materials’ deliver a clear image, an image that hits beneath conscious understanding – MH

Hatoum excels at what I call emotional formalism. She creates, visualises, makes real environments, structures, pieces that have a simple material significance and formal shape which are emotionally arresting, touching and powerful. They grab the heart. When I see these groups of shapes, I think of many many videos of war-destroyed residencies on the many many cataloguing jobs that I did as a researcher and archivist with the Reuters Television archive. 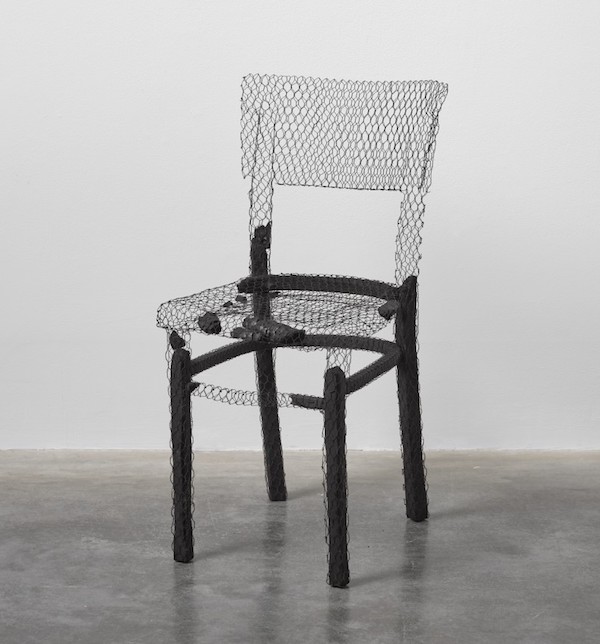 In speaking of her process, the artist talks of how psychology enables art ‘to discover the primary myths of humanity and how art-makers must use ‘amorphous and confusing materials’ to deliver clear images. These scenes of destruction are, in another light, also images of creation. How human beings visualise objects from the impossible nothingness of the world and make them real, make kitchens for human beings to live in. By showing the visual and practical imagination in the outlined chicken-wire shape, Hatoum is sculpturally marking out human creativity itself.

The ‘magical significance’ of which Hatoum talks, the artist as magician is there for me; I get it, I understand that feeling when I see these pieces. This is art that implies a universal understanding, and therefore is emotionally stimulating. It is not art working to the service of individual religion and is not understood as such. But instead, it works with our ideas of psychology, ideas that are the way contemporary thinkers understand humanity’s relationship with the world.

I am moved by Hatoum’s globe work and her materials. They are awkward, wrong, or to use her word, confused. A map of the world is rendered in impossible orange-red neon that suggests an electric fire element. Other large (metre-high?) globes are decorated, finished in tubular curves that suggest the shape of the brain. The impossibly hairy version is even more compelling, perhaps because more ‘confused’. As she says, the ‘amorphous and confused materials’ deliver a clear image, an image that hits beneath conscious understanding. The piece is called ‘Dark Matter’ (2019) suggesting further elements of deep science, the invisible physical structure of our own mind and also the universe. There are many debates currently about the possibly tubular construction of consciousness. Whether Hatoum is deliberately referencing these, or whether it’s just my own association with my on-going science education, I don’t know. But I feel it.

Other materials that Hatoum exercises with ‘iron precision and logic’ and an ‘extreme degree of self-awareness’ (to use her own words of what an artist must possess to do good work) include the materials of construction. The iron struts that form the frame on which a concrete house is built. The concrete rubble that suggests the destroyed houses in many war-impacted videos.

The significant new installation ‘Remains to be Seen’ (2019) of the exhibition hangs the heavy industrial materials of bars and concrete into a cube shape, full of air gaps which are wide enough to tempt the intrepid gallery-visitor to walk between but this is prohibited, leaving the viewer to witness the impossible shape from the outside. The rough lumps of rubble-like concrete pieces, formed by chance rather than human iron-like precision contrast with the struts, contrast with the empty air. The cube suggests the repetition of creating those buildings, those blocks of apartments in, say, Aleppo, that have been repeatedly witnessed bomb-blasted in cities of Syria and elsewhere, struck by weapons and revealed on camera with their insides open to the air. 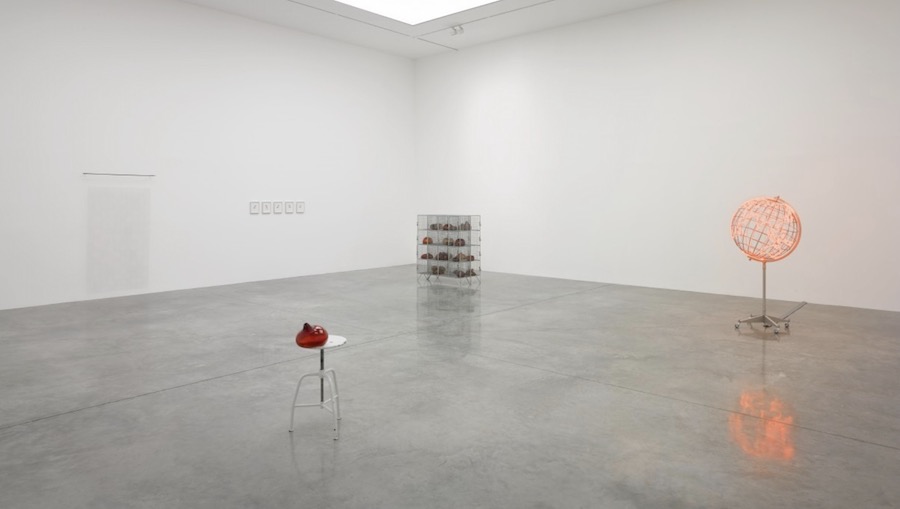 The regular, repetition of units in ‘Quarters’ (1996) shows again how our film diet influences us as to our images of war. My friend is struck by the Holocaust references of the piece, perhaps thinking of films such as the moving images of the holding camps where people were kept before being moved on. (This friend, by the way, is the painter Cassandra Mahoney, who is currently engaged in her own project investigating through the canvas and tapestry the operations of war in society, the relative roles of the perpetrator, the bystander and the victim and how this repeats over history in diverse contexts. Mahoney is encountering Hatoum’s work seriously for the first time through this exhibition and it is fascinating not only to witness it myself but to see its effect on a fellow artist with whom I shared a studio this summer). The exciting geometry of Hatoum’s complex structural piece in which individual bed-shapes are arranged in cross-formation has a cumulative effect, letting disconcerting views emerge in which the individual is lost in the dynamic of multiple line and plane. It is a play on the architecture of human confinement, the dormitory design of holding people together in a place where they can be managed, whether this is for boarding school, hospital, workhouse, prison camp purposes. It’s a political piece and Hatoum’s current work continues this engagement.

This is most striking in her theatrical ‘Remains of the Day’ (2016-18), the burnt interiors conceived for the 10th Hiroshima Art Prize exhibition, arranged and expanded with new relevant pieces. She shows us an ensemble of ghosts. Home, not institution. Home that has been killed.

in the remains of the day. It remains

to adjust the covers, lift and push

the tray into the morgue refrigerator.

Some friends remain outside the gates.

The stocky man in orange and red

to tell his family all that remains.