Nancy Fouts found herself starting adult life in what, for a girl from Kentucky, must have been the confusing and somewhat silly world of a British finishing school. Sent across the Atlantic in 1963 at the tender age of 18, she began preparations to become that most obedient of female roles: the glittering debutante. But this was the swinging sixties, the era of female empowerment, and her parents’ plans were to go a little askew. Instead of learning how to elegantly exit a car, she learnt how to shoplift. Instead of brushing her hair by a mirror, she started cutting it into fashionable style. And by the time she had applied for Chelsea College of Art, her path in life was permanently altered. 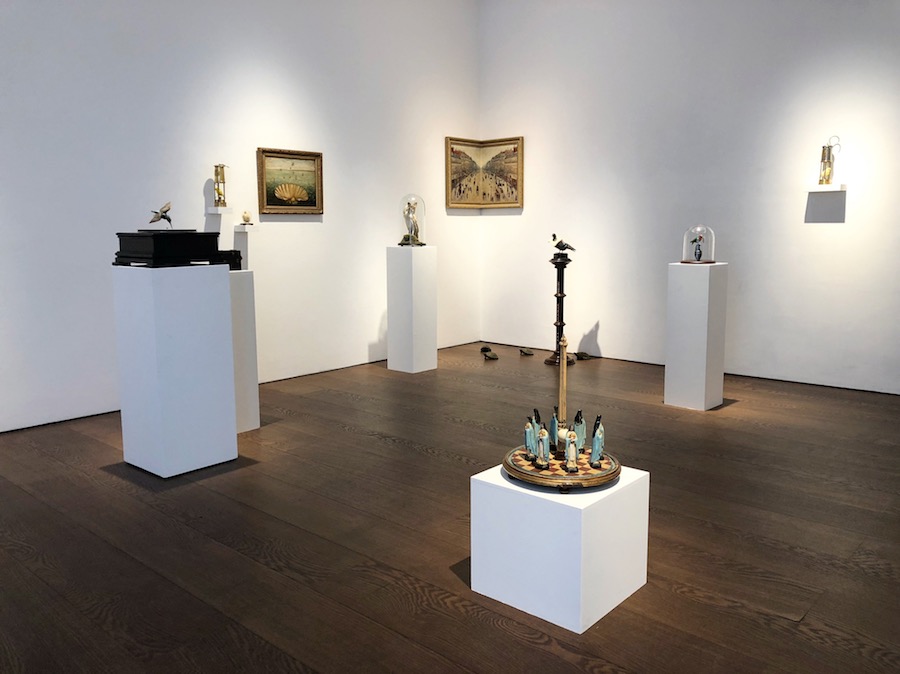 Over the years Fouts would acquire a husband, children, and a successful career as the founder of a model making studio in the advertising industry. But for the past 20 years or so, she has been working full time as an artist and has achieved considerable success. Banksy is reportedly a big fan. The two share a dark sense of humour, their art similarly observing and ridiculing the farcicality of modern life. Fouts’ sculptures look like they might have been props from a store cupboard at the diabolical Dismaland theme park, though despite the likenesses she steers clear of Banksy’s political lecturing. Down the Rabbit Hole, the artist’s latest solo show at Flowers, marks 48 years since her first exhibition with the same gallery in 1970. There’s a mixture of old and new works from over the past decade, and the show is full of the same questioning attitude and subversive wit that no doubt drove her from etiquette school to art school half a century ago.

Fouts’ advertising background can be seen clearly in her work. Not only are her sculptures slick and beautifully produced, but their messages work as slogans or warnings that resonate with bold clarity. She creates in a traditionally surrealist style, marrying together unrelated objects and concepts for bizarre effect. Take for example a wooden walking stick covered top to bottom with sharp rose thorns. Here we have an item that’s entire purpose is to support, but in this case cannot do so without painfully harming in the process. There are many of these visual oxymorons and clever contradictions amongst the artist’s work. Another understated highlight depicts a beautiful lovebird perched atop a grenade having just playfully plucked out its pin, the piece an obvious metaphor for naively executed destruction. 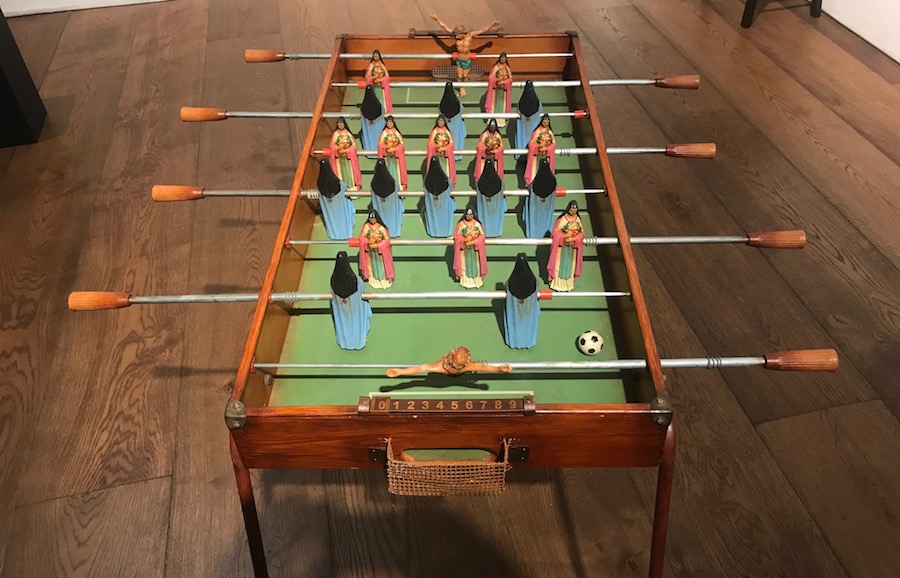 Downstairs Fouts’ plays with religious imagery. There are several large boards covered in small Christian icons, a household iron with an image of the Virgin Mary burnt into its underside, and an exit sign that swaps the X for a crucifix. This is where the artist is at her most politically vocal: one work, a bible marked with bullet holes, serves as a topical reminder of the prevalence of guns in America and their relationship with religion. In the same manner as the walking stick, Fouts covers a gun in spikes, reminding us of the harm done to oneself when attacking others. Elsewhere she joins two male figures from depictions of the Garden of Eden to create Adam and Adam, what I like to think can only be a woman from the Bible Belt’s rebellious creation of Christian-authorised homosexual love. 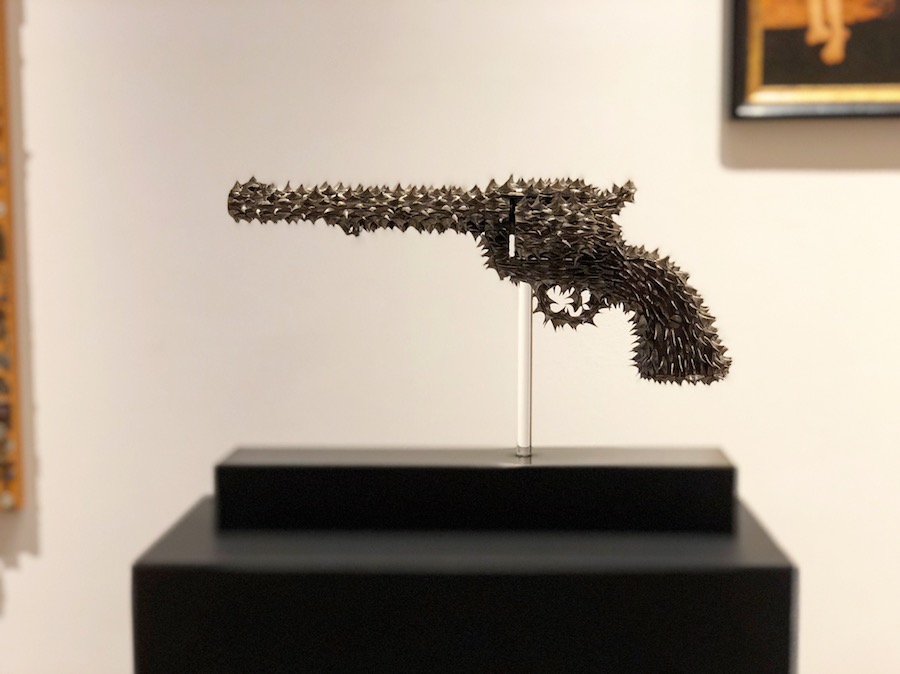 Fouts’ unique way of looking at objects keeps this exhibition entertaining. Readymades can often be boring, especially when they don’t appear to be about anything much, so there’s a lot to be gained from taking the time to engage with work that embraces humour and wears its heart on its sleeve. Down the Rabbit Hole is an unexpected antidote to much of the inaccessible nonsense that dominates contemporary installation sculpture. Trust an advertising guru to present us with what we didn’t know we needed, eh?

Fouts has had a profound influence on a younger generation of artists including Tim Nobel, Sue Webster, Polly Morgan and Gavin Turk. In Conversation: Nancy Fouts with James Putnam and Gavin Turk 2 May, 6:00 – 8:00pm at Flowers Gallery Cork Street.