Nancy Rubins’ exuberant exhibition at Gagosian Britannia Street comes as a great relief in the current epoch of self-righteous #MeToo feminism. Essentially it consists of four very large sculptures, accompanied by two equally large wall drawings, The drawings – so-called – are non-figurative, and need not detain one for long.

They are essentially playful works, and, as such, I found that they raised my spirits – ELS

The sculptures consist of readymade metallic forms representing life-size animals: hogs, turtles, deer – you name it. These are clustered on steel armatures and held in place by steel cables; The total effect is somehow more vegetable than animal. One sculpture is called Agrifolia Major. Another is Crocodylitus Philodendrus. 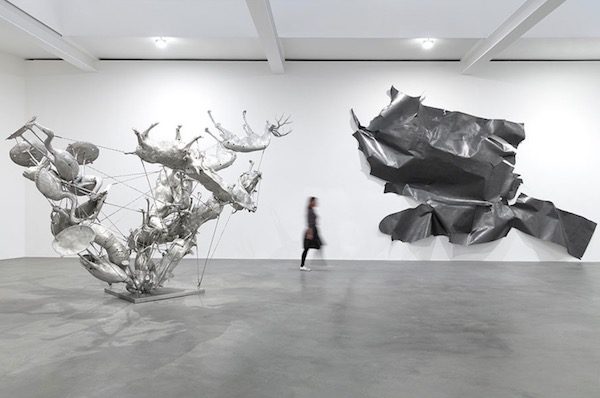 In spite of the fact that so much of what is used apparently comes to the sculptor readymade, and also in spite of the fact the works are pretty much monochrome – the colours of metal (cast iron, brass, bronze, aluminium, stainless steel – no paint) – the effect is joyfully spontaneous. The complex forms offered to the eyes seem to shift as one walks around the sculptures, or as one stands in a different position in relation to them. Though none of the component parts actually move, what they seem to offer is a reflection of a world that is in a continual state of flux.

Which, I have to say, is all too often a metaphor for my own relationship to the external world, though not, alas to an art world that seems increasingly preoccupied with a perceived duty to preach.

Rubins’ work certainly does have a relationship to the contemporary cult of appropriation, though not in its most radical and drastic form. The readymade animals are re-purposed, not left alone to make their point, like that all too celebrated not-by-Duchamp/not-by-Elsa-von-Frytag-Loringhoven Urinal that keeps on being trotted out in various exhibitions devoted to the history of the 20th-century avant-garde.

Essentially, Rubins uses these components because they are ‘there’, and they amuse her, not to make a moral and philosophical point. They are essentially playful works, and, as such, I found that they raised my spirits when I looked at them.

And, yes, they did what Serge Diaghilev demanded of Jean Cocteau when Cocteau badgered him for instructions about how to be truly avant-garde. “Jean,” Diaghilev said, “surprise me!” Now I think about it; I can imagine some of Diaghilev’s great dancers twirling delightedly round one of these sculptures. Any one of them would make a great centrepiece for an outrageously Modernist ballet. Music perhaps by Saint-Saens: The Carnival of the Animals. Something old married to something new.