Born in 1881, Natalia Goncharova was a full generation older than Lee Krasner and came from a very different background from that of Krasner’s Jewish parentage. She was born in 1881, the same year as Picasso. Her family was somewhat impoverished aristocrats, but her father was a successful architect. There was the family estate – from living there, she learned something about the lives of the peasants who lived there.

Wikipedia concludes that “photographs of her in the family estate show her wearing peasant clothes in combination with city shoes.” She had a rigorous professional training at the Moscow Institute of Painting, Sculpture, and Architecture, and by 1903 was showing her work in major Russian salons. In that year she was awarded a silver medal for sculpture. She soon moved into progressive circles. Together with her partner and fellow artist Mikhail Larionov, Goncharova became a member of the Jack of Diamonds, the first avant-garde art group to appear in Russia. The group’s initial exhibition took place in 1910. 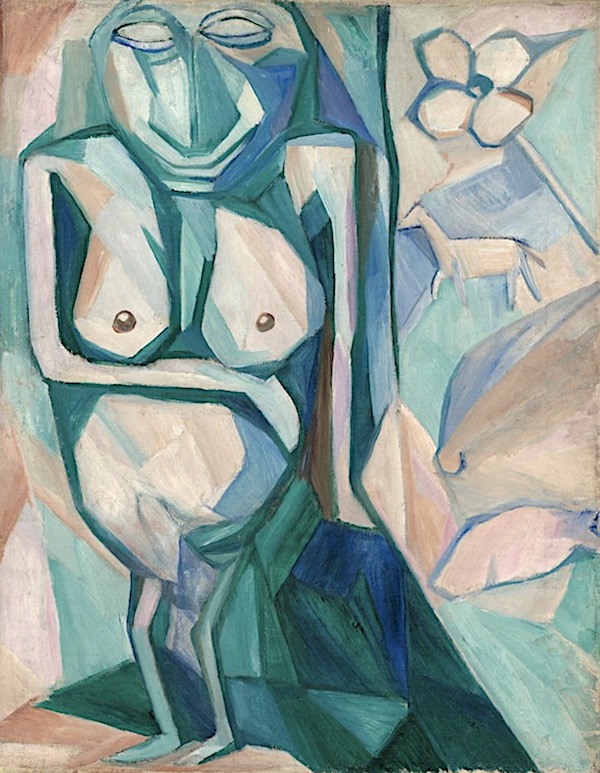 Goncharova The Deity of Fertility 1910 © ADAGP, Paris and DACS

Goncharova rapidly became a heroine of the growing rebellion against the cultural establishment that was taking place in Russian art. At a second avant-garde show held in the spring of 1912, and provocatively entitled The Donkey’s Tail, more than fifty of her paintings were put on show. The show was intended not simply as an embrace of the new, but also to mark the differences between Russian avant-gardism and any Western European equivalent. It created an uproar. Goncharova’s four-panel painting of the Four Evangelists was removed by the authorities, offended not only by the presence of a work of this subject in a show with such a sardonically mocking title but because icon-painting, from which the images derived, was then considered to be exclusively the business of men. The panels were later included in Roger Fry’s Second Post-Impressionist exhibition held in London the following year but missed most of the critical comment at that time because the Russian works arrived late.

They are now on view at Tate Modern, lent by a significant Russian institution. In 1913 Goncharova also had a massively successful solo show at a new commercial gallery in Moscow.

All of this is impeccably set out in Tate Modern’s new exhibition devoted to the artist, as part of the big catch-up exploring the work of leading female Modernists and Post Modernists that is now taking place in several London galleries, official and semi-official. I enjoyed the show very much, but certain doubts strayed into my mind. 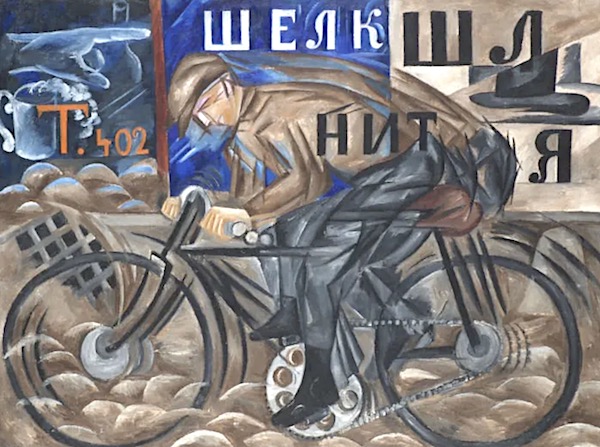 Some of these were to do with the long second part of Goncharova’s career. During World War I, she and her partner made their way to Switzerland after Larionov was wounded in action. There they became part of the creative equipe of Diaghilev’s now exiled Ballets Russes. In 1915 Goncharova worked on an abortive project for a ballet called Liturgie – designs for this are in the Tate exhibition. Already involved with the company, they cast in their lot with Diaghilev and left Russia forever in 1921. Some of the most famous Diaghilev productions of the post-war period, for example, Le Coq d’Or and Les Noces, had designs by Goncharova. The work she did in that phase of her life was seen internationally – as far away from Russia as Australia. She became a French citizen in 1938, lived throughout the World War II occupation undisturbed in Paris, and died in 1962, aged 81.

By the time she died, she was much better known as a stage designer than she was as a painter.

The irony of Goncharova’s career, well-illustrated by the current Tate retrospective, is that, while she maintained her position an international name thanks to her links to the ballet, she retained a profoundly Russian identity. One which gradually became out of date. The exhibition demonstrates her close bond not only to Russian icons but also to the folk paintings called Luboks. Wikipedia defines these as follows: “Russian popular prints, characterised by simple graphics and narratives derived from literature, religious stories and popular tales.” They began to be made in the late 17th century as woodcuts, and later became engravings, etchings or even lithographs. It is essentially a tribute to a world that was already gone. Or disappearing fast, at the time when her images were made.

In this sense, Goncharova’s artistic range, despite her international success as a theatre designer, and despite – too – her impact on fashion, thanks to publicity offered by the ballet, in the years immediately following World War I, was a great deal more limited, though maybe easier to define, than that of Lee Krasner.