There’s a conflict of impulses in the art world just now. On the one hand, there is a desire to reflect what’s going on in society. On the other, the wish to present contemporary art as an independent entity, detached from the travails that surround it. These conflicting agendas surface in current museum shows and they manifest themselves in commercial galleries as well – though the problem for those is that art of a miniatory, didactic sort doesn’t look well when hung on the wall behind a sofa.

One escape from this dilemma is to focus on photography

There has been a recent surge in shows featuring top quality images – which reflect the travails of our epoch. A good example is Proximity, the Don Mcullin retrospective that has just opened at Hamilton’s, London’s most prestigious commercial gallery specialising in photography. What this event offers is a series of vintage prints that reflect, in graphic form, some of the defining conflicts of the second half of the 20th century. It is particularly rich in images from the war in Vietnam. Present is a print of what is perhaps the most famous of all McCullin’s pictures. Entitled Shell Shocked Marine, Vietnam, Hue, 1968, it is a small image, just 10 1/8 x 7 in, that encapsulates the psychological damage done by the conflict to just one of its participants. The massive figure depicted, tightly enclosed on every side, takes on a paradoxically monumental significance. 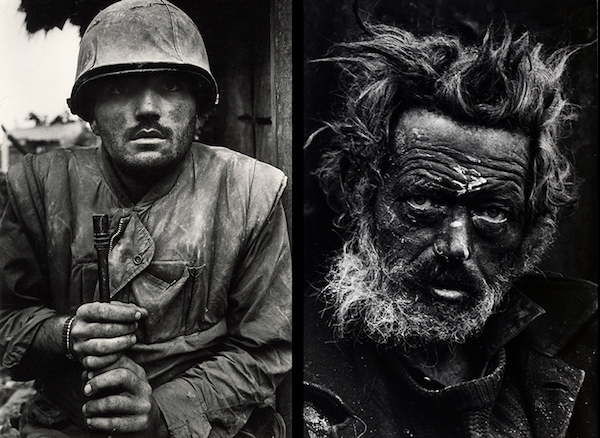 McCullin did not confine himself to faraway conflicts and injustices. Here, for example, one can see a row of British coppers listening politely to a speech by Colin Jordan, one-time leader of the British Fascists. There is also a haunting close up of a Tormented, Homeless Irishman, shot in London in 1969. McCullin says of this image: “His eyes tell the story of his life, you can see that in the eyes.” What the portrait reminds me of is Rembrandt’s even smaller etching of a Beggar Seated on a Bank (1630), which is, in fact, a self-portrait of the artist.

Confronted with images of this quality, anything that wants to be art-for-art’s-sake has to struggle to make an effect. A case in point is another retrospective show, this time at one of the London spaces of the Gagosian Gallery. It is devoted to the work of the American Conceptual Artist Walter de Maria (1935-2013) Top Photo. What it offers is a few gnomically simple artworks – metal forms laid on the floor. One of these, for example, is a 14-Sided Open Polygon, made of stainless steel, with one solid stainless-steel ball wedged into it. Notes offered by the gallery remark that: “The ball remains static, charged with potential energy”. To which my reaction tends to be: “Lord, I believe – help Thou mine unbelief.” Much of the rest of the show consists of framed sheets of scribbled notes. 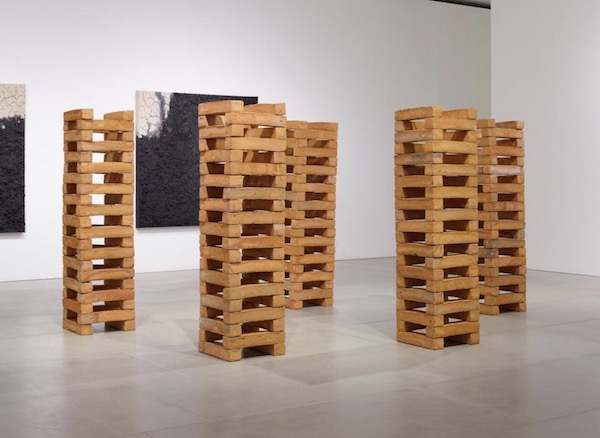 A kind of compromise between what one sees at Hamilton’s and what one sees at Gagosian Grosvenor Hill is offered by a show at Blain/Southern, close by in Hanover Square. This is a first London exhibition for the Mexican-born Bosco Sodi, who now has studios in Mexico, New York and Barcelona. The primary influence is Japanese. As the press release tells one: “The paintings are the outcome of an intensely physical process in which experimentation and chance play an important role. Laying the canvas horizontally, Sodi sculpturally layers his paint mixture by hand over several days, stopping at the first sign of cracking. He then gives the process over to time and the elements, as the work dries and fissures form across its surface.”

The results, though the images are all in black and (slightly off) white, resemble some of JMW Turner’s more radical Colour Beginnings. That is, it becomes irresistible to read most of them as extremely abstracted landscapes, whether or not this is what the artist intended.

The paintings are accompanied by a set of slightly tottering towers made of clay bricks – as a gallery notice tells one: “Kiddies, please keep off.” The bricks are fired in different rustic kilns. “Each kiln burns differently, which results in variations in the texture and colour of the individual bricks.” 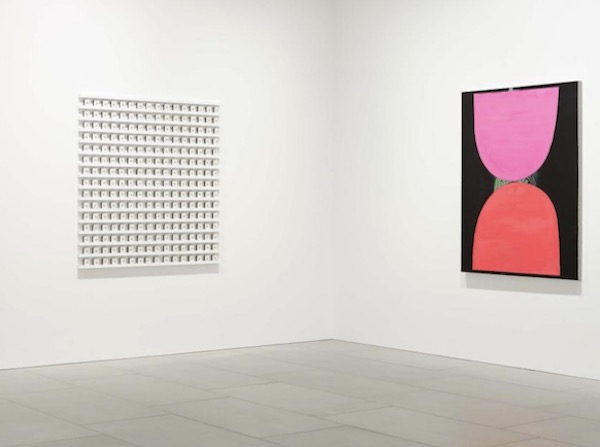 Downstairs in the same gallery, there is a small mixed show, which Bosco Sodi has curated in conjunction with Alberto Rios. It is called Approaching Abstraction. For me, the most striking work was one by Tania Candiani called Sobre el Tiempo (On time). It consists of row after row of square faced digital watches, all set to different times. The moral here, I thought, was: “I wasted time, and now doth time waste me.” Well that, sure enough, is what one notes in many aspects of contemporary society. It’s not so far from some of the things McCullin also has to tell one.