Unlike London, New York galleries are open for business. After my first Covid jab last week, a wave of cautious optimism motivated me to hit the frigid downtown streets. Luckily, this gallery field trip coincided with a dear friend’s much-heralded solo show, an introduction to work by two inspiring artists I previously did not know of, and even the Outsider Art Fair’s annual and beloved event, spread between galleries. Monday New York was blanketed with an unusually dramatic snowstorm, so my weekend jaunt was perfectly timed. (And as I send this out, it is yet another snowy Sunday, one week later) 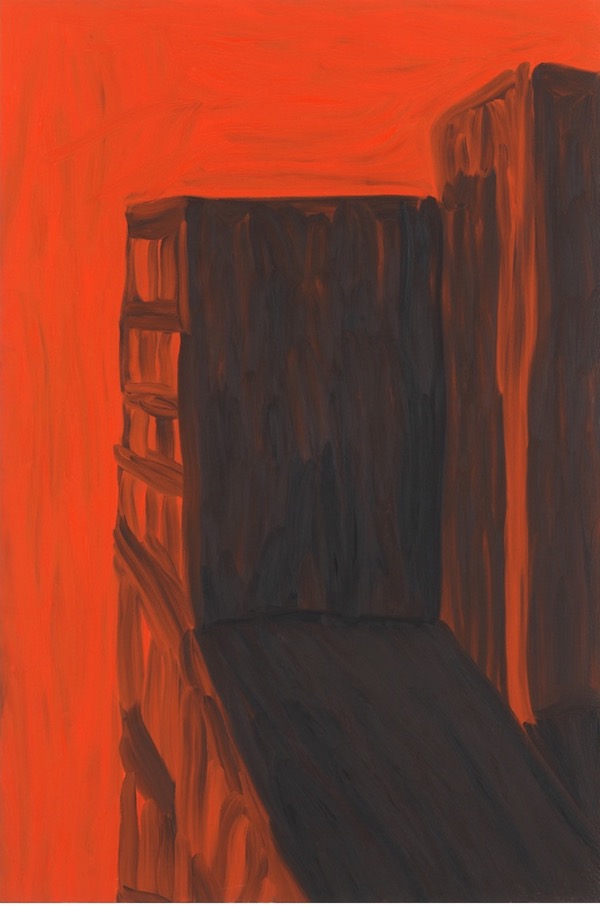 Since moving back to my hometown in 1985, I have been an ardent fan of the painter Martha Diamond. I first saw her jazzy urban abstractions at Robert Miller Gallery. Her loose and lyrical canvases immediately inspired me, and I am fortunate that she is now a friend and neighbour. Diamond, a native New Yorker and Bowery resident since 1969 is a master of the gestural wet on wet brushstroke and has long been considered an artistic downtown treasure.

Kudos to the young, hip and visionary gallery Magenta Plains, for curating a brilliantly curated show that has garnered much critical acclaim. Diamond’s painterly paean to NYC includes small jewel-like studies on masonite, plus six large canvases. Using her studies as sketches, Diamond’s images range from off-kilter geometrics to an eerily prescient view (done in the eighties) of the Twin Towers against a flaming sky.
“Red Cityscape” turns brick buildings into elemental mountainsides, echoing flaming Southwestern sunsets. And in 1981’s “Facade” a punky spike-haired shadow (perhaps one of Richard Hambleton’s painted obsidian silhouettes?)is darkly counterpointed against sweeping monoliths. The much-admired artist has spoken about “simple things with their own magic.” Vision, light, gesture and nuance enrich Diamond’s singular paintings with potency and poetry. 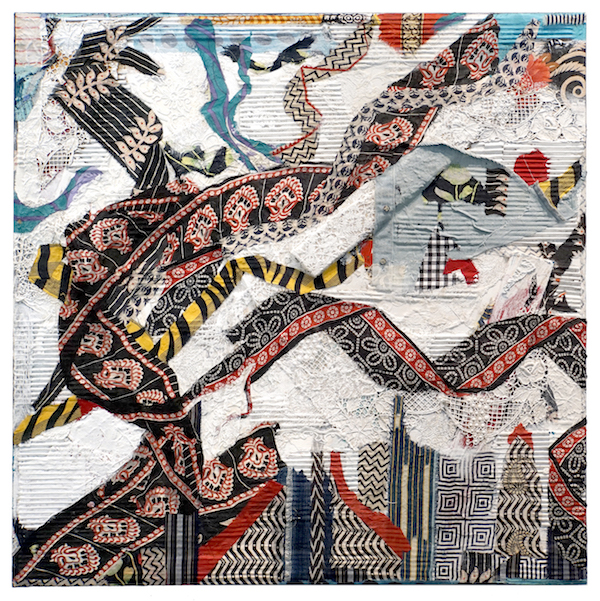 Poet, literary critic, political activist and Tribeca, NY resident Peter Sacks expands collage beyond any acknowledged borders. The South African-born artist’s body of work is as multicultural as it is magical.
Author of five well-heralded poetry collections, Sacks has said, “I see my paintings as a cross between cave paintings, medieval frescoes, illuminated manuscripts and late 20th-century abstract paintings.” Hand-typed poetry is visible in the universes Sacks creates from African indigo cottons, antique Japanese silks, old embroidered linens, cardboard, and button-down plackets faded with wear.
.
“Mare Incognitum” 2019, a masterpiece of fabric and shells mounted on square wooden panels can be viewed as revolutionary mosaics or a modern mandala. Indigo sails unite a frieze of a fleet of ancient Greek ships, sailing upon an ocean and topography that vibrates with intricate printed patterns. Lincoln’s five-dollar bill image and a photo of the artist bob in a churning and textural sea, born from an array of international textiles.

Most of this work was created during the pandemic, and the series “Above Our Cities” especially enchanted me. Skyscraper silhouettes pierce lace clouds, floating above ribbons of batik, gingham, and tribal prints. Enlivened by form, rhythm and texture, the curated chaos of spires and opulent sky echoes New York at its best and most beautiful.

Named after the legendary underground movie, Downtown 81, artist and curator Sam Gordon gathers personal favourites in an eclectic show that can be read as a much-needed NYC love letter. Gordon, co-founder of the fabulous Gordon Robichaux Gallery in Union Square, has gathered a collection that would have made the legendary Ellen Stewart, La Mama’s original owner, director and developer proud. A divergent and fascinating selection perfectly epitomizes Stewart’s bohemian, multicultural esthetic. Gordon has chosen work originally shown in more than two dozen small art spaces that exist in Brooklyn and Queens. Many of the galleries are artist-run and highlight timely and transgressive art.

Artists include Elisabeth Kley, repped by a gorgeous ceramic black and white cascading fountain. Frederick Weston’s “Freddy the Frogman” is a verdant homoerotic collage, a great introduction to an artist who sadly has just died. Leilah Babirye’s totemic sculpture is a prime example of her synergistic melding of Ugandan tradition and enlightened gay activism. More of her work will be seen in London at an upcoming Stephen Friedman show. And Matt Paweski, repped by a metallic art “machine” had a solo show in London last Autumn at Herald Street. Another stellar piece, Ming Smith’s black and white abstracted photo beautifully represents this seminal artist’s work, recently published as an Aperture monograph. Luckily, the show has been extended so intrepid art lovers can enjoy a view of cutting-edge contemporary NYC art. Top Photo:  Leilah Babirye: Downtown 2021 curated by Sam Gordon at La Mama Galleria 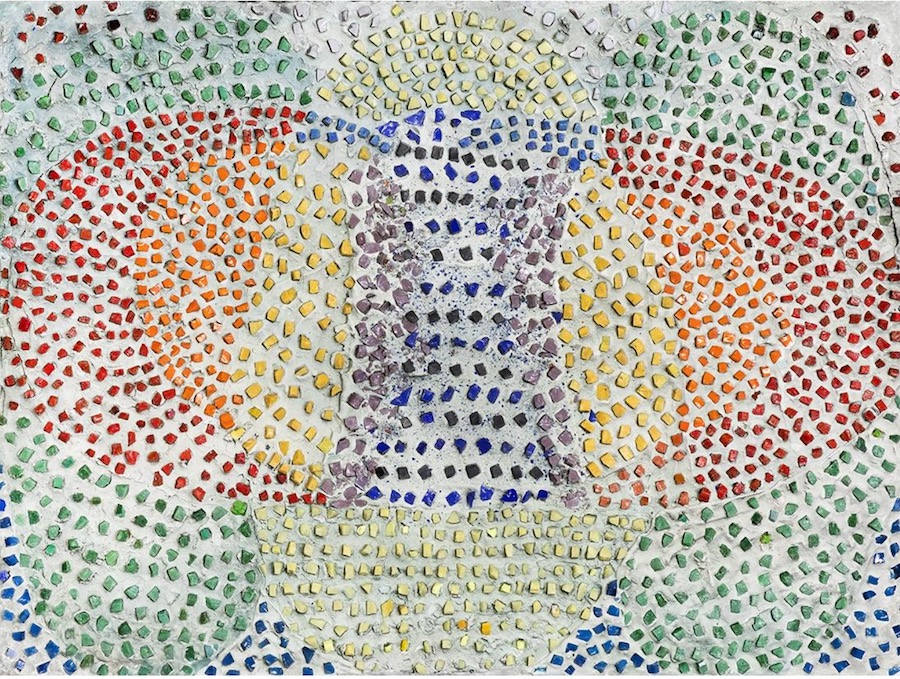 Jeanne Reynal (1903-1983), first studied mosaics in Europe before WW2 and was an integral part of the NYC Abstract Expressionist circle. Her work, an important forerunner of the Pattern and Decoration movement, beautifully epitomizes an ancient craft translated to modern sensibility. Small wall works, a tribe of sweeping totems, freestanding sculptures reveal Reynal’s active participation with abstraction. A particular jewel is the mid-century biomorphic table, one of three, created collaboratively with her lifetime friend, Isamu Noguchi, and on loan from the Noguchi Foundation.

World travel with her husband, Black painter Thomas Sills, influenced her formerly subdued palette with a heightened colour explosion, reflective of indigenous cultures. From 1946 onwards, Reynal lived and worked in New York City, and was one of the first collectors of Jackson Pollock’s paintings, purchased from Peggy Guggenheim’s gallery.

Earlier works, like “Young Friends” (1949) use semi-precious stones to illuminate the muted palette. The undulant and assertive black and gold “Woman Clothed With Son”, is one of a tribe of freestanding sculptural works. Created after an African sojourn, the totemic freestanding sculptures are over ten feet tall.

Reynal’s life is as fascinating as her career. Close friends Arshile Gorky and his wife Agnes, Roberto Matta and Wilfredo Lam were all part of her crew. Although her work is in American museums and she was a definitive cultural force; this beautifully curated show introduces an original American woman artist.

As part of the annual Outsider Art Fair, which was held this year in participating galleries, Andrew Edlin focuses on outsider artists working in abstraction. I loved Domenico Zindato’s meticulously rendered works, his pattern-making lush, sensual and psychedelic. The Calabrian-born artist, who lives and works in Mexico, incorporates pastel, ink and acrylic in intricate meditative drawings. 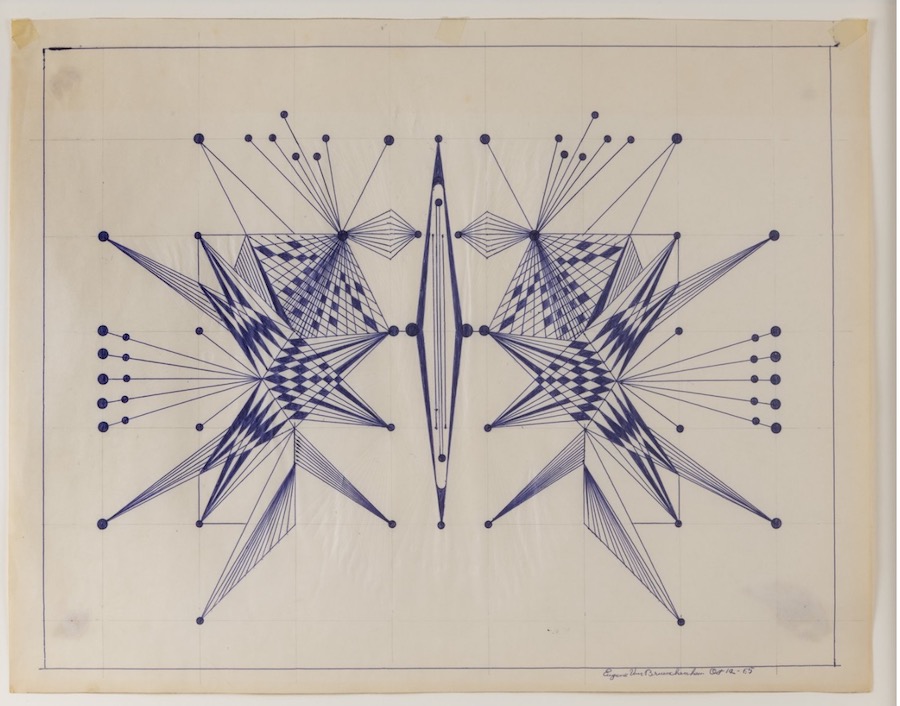 Five stellar shows all in easy walking distance, safe and socially distant crowds, and a much-welcomed reminder of why New York remains one of the art world’s vital and most accessible epicentres. And next week, barring nor’easters, I plan on checking out David Hammond at the Drawing Center……