Oceania, Royal Academy: To some extent, our ideas about what we call ‘primitive’ or ‘tribal’ art are still formed by what we have learned, during the last century or so, about the art of tribal Africa. African art had a major impact on the attitudes of the Cubists, and later on those of the Surrealists, Deep in their hearts, however, these admirers didn’t really want to know what primitive art (as they defined it) was about. Their attitude is summarised in Picasso’s famous remarks about his fellow Cubist Braque. After admitting that Braque “loved Negro pieces… because they were good sculptures,” Picasso claimed that “He doesn’t understand these things at all; he’s not superstitious.” This is, in effect, a put down wrapped in a compliment. However, one also gets the feeling that Picasso didn’t want to know for sure what kind of meaning these artefacts had for the people who produced them. He preferred his own fantasies.

The R.A. show is a triumph in more ways than one

Another kind of supposedly primitive art with a major impact on Modernist sensibilities was Pre-Columbian art, more especially that produced in Mexico and in Peru. Artefacts produced there, before the European conquests in the region, were fetishized by many 20th century Latin American artists, seeking to emphasize their creative independence from what was being produced by European and North American contemporaries.

Western reactions to the art produced before, and independently after, European contact was made, in a widely scattered number of Pacific territories, whose inhabitants were nevertheless ethnically linked to one another, has always been more muted. The new Oceania exhibition just opened at the Royal Academy to celebrate the 250th anniversary of Captain Cook’s most famous voyage of exploration, one of three, is apparently the first survey of its kind, The only substantial group of tribal peoples it leaves out is that of the Australian aborigines, though Cook came into contact with those as well. The great explorer met his end in 1779 on a Hawaiian beach, while attempting to kidnap a Hawaiian chief, “in order to reclaim a cutter stolen from one of his ships.”

In a way, this misadventure seems to symbolize the haphazard and often antagonistic nature of European relationships with these Pacific cultures.

The R.A. show is a triumph in more ways than one. It is extraordinarily complete, in terms of the number of cultures it describes. And it preserves their lasting air of strangeness full force. How about this as a description of a large and louring head from the Hawaii that did away with Captain Cook? 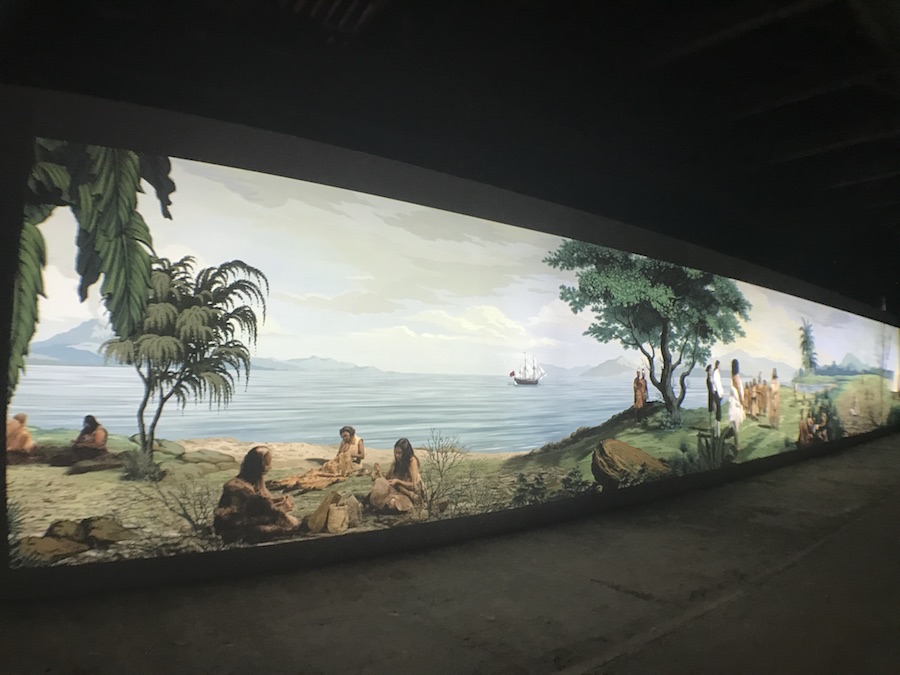 It may, therefore, seem perverse to say that the thing in the exhibition that I liked best of all is the huge, ambitious video that concludes the show. It is the work of Lisa Reihana, a contemporary Maori artist. Entitled In Pursuit of Venus (Infected), it unfurls continuously along a wall. In all, it spans a length of 26 meters.

Its major source, incongruously, is an early19th-century French scenic wallpaper, dated 1804. Designed by Joseph Dufour*, this panorama is entitled Les Sauvages de la Mer Pacifique. Referencing both Captain Cook and the Pacific voyages of Jean-François de Galaup, Comte de Lapérouse, a French Pacific explorer who met a mysterious end in 1788 at Vanikoro in the Solomon Islands, it presents a romantic view of these newly discovered territories – a conviction harmony must prevail among their fortunate inhabitants,

Reihana questions this. Her figures move, and everywhere you see then move – Pacific natives, and Europeans more often than not in military uniform – you see them, more often than not, doing ill to one another. Meanwhile, the world that surrounds them is also fluid, Boats of different kinds ply the waters in the background. All of this becomes more real than you are, the watcher. Look away and down at the gallery floor, and it seems to shift beneath your feet.

If you want to see what artists’ video can really do, go here. It’s streets ahead of the dreary moralism you’ll be confronted with at the Turner Prize exhibit at Tate Britain.