More than this, he counts for something right now, at a time when many supposedly big names in the ‘contemporary’ category are subtly fading away – no longer entirely relevant. Eliasson first made a significant impact in London in 2003, with The Weather Project, an installation in Tate Modern’s demanding central space. No other artist has risen to the challenge that this presents with anything like the same degree of success. More recently, there were those blocks of ice planted outside the same institution, slowly melting away.

For me, those didn’t have anything like the same impact as The Weather Project. They weren’t particularly interesting to look at – big ice-cubes, so what? – And you had to be told that they had been specially imported from somewhere far north, to serve as emblems of climate change. That was not something you could intuit for yourself.

The new show, entitled In Real Life, doesn’t suffer from this disadvantage. You react to it at the prompting of your own physical sensations, when you are plunged into the various environments the exhibition provides. Some of these environments, paradoxically, are at their most effective when they don’t allow you to see. You make your way through them as if you were, quite literally, penetrating a cloud. Others depend on your own physical reactions. Your shadow, in various hues, is projected on to a wall. So are the shadows of other visitors who happen to be present. Together you combine to make an elusive, constantly shifting composition. Throughout the show, many of the spaces you pass through are visually disrupted. Sometimes, indeed, you are effectively prevented for seeing anything at all. Not seeing is the point. All you are offered is a kind of luminous fog. Yet there is no elaborate trickery involved. The mechanisms used to produce Eliasson’s effects are in plain view. Only occasionally does the end result seem banal. There’s a big temporary fountain playing on a terrace outside the Blavatnik Building where the show is housed. It spouts from amid an array of metallic rods, of not much formal interest in itself. When I looked at it, I thought ‘So what?’, just as I did when, on a previous occasion, I encountered the big ice-cubes mentioned above. 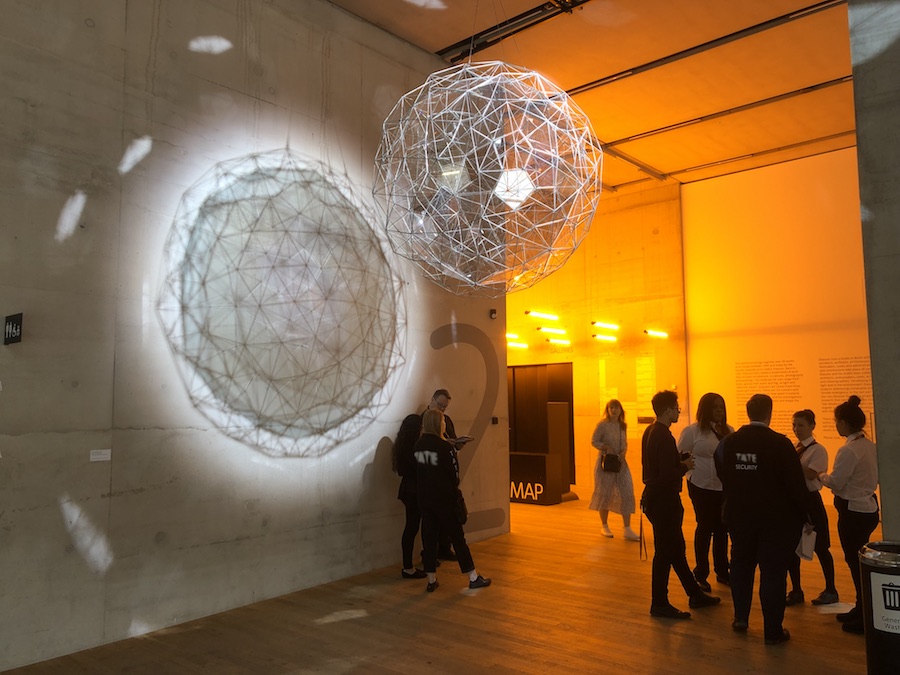 The exhibition doesn’t consist of installations alone. There are sequences of photographs. A wall full of slogans, which contrasts with another massive wall covered evenly in Scandinavian moss. There are tables with Lego bricks you are invited to use for your own creative purposes. There are Eliasson prints and tchotchke waiting for you in the exhibition bookstore as you exit, including a sunflower medallion you can wear around your neck. This was designed to supply moderate amounts of power to people who have no access to an electric grid. Even if you do have that, you might nevertheless want to wear one as a symbol of solidarity. Within the show, there is a large glass case, jammed with geometrical objects. I think I also saw more of these in another Tate boutique as I went out of the building, all ready to be carried home with you. Meanwhile, members of the artist’s large team are busily at work in Tate Modern’s kitchens, making Eliasson approved eats.

The show, taken as a whole, is a for-once convincing example of the populist agenda now being embraced by lathe contemporary art institutions worldwide. It tends to offer art as an experience, rather than art as an array of objects. It does so by engaging both the physical body of the visitor and also – hopefully – the mind. If part of its purpose is in fact to preach, it doesn’t hector. It does indeed want to be part of a universally recognisable reality. Not just an institutional experience.