I’ve just read a piece on the web complaining that the one area of the contemporary art world where gender equality is making no progress is in the exhibition programmes of big commercial galleries. As opposed, for example, to what is offered by major official galleries of modern and contemporary art such as the two London Tates.

Yes, this is perfectly true. It is also true, however, that the Tares and other major official or semi-official galleries here in Britain are making little progress in presenting younger artists. What they provide is carefully balanced – plenty of women, a partiality for artists who represent ethnic minorities, but artists who are either safely dead or else nearing the end of their careers. Their tributes to ‘young male artists’, occasionally offered, tend to feature long-departed creators such as Jean-Michel Basquiat. A naughty boy, sure enough: born in 1960, safely dead by 1988, and unlikely to rise from his grave to trouble the current contemporary arts bureaucracy.

Meanwhile, younger artists of any kind struggle to make a breakthrough into the big time. This is particularly the case with artists here in Britain. There are exceptions – just a few. Maybe the most conspicuous of these is Oscar Murillo. Born in Colombia in 1986, Murillo was brought to Britain by his family when he was still a child and received his artistic education in British art schools. He is, however, cautious to fend off any suggestion that he is in any way a specifically British artist, though London is a place where he has a studio. He belonged to a loose grouping of very young abstract artists, most of them American, who did pretty well in the international art market until the financial crash of 2007. He survived the debacle better than most of them and has been represented since 2013 by David Zwirner, who are a major international gallery. He exhibits worldwide, and till recently was much better known outside of Britain than he was here. That is starting to change. He currently has a show at Kettle’s Yard in Cambridge, in addition to the one at Zwirner’s London gallery reviewed here, and he is a nominee – in fact by far the best-known nominee internationally – for the upcoming Turner Prize this year. 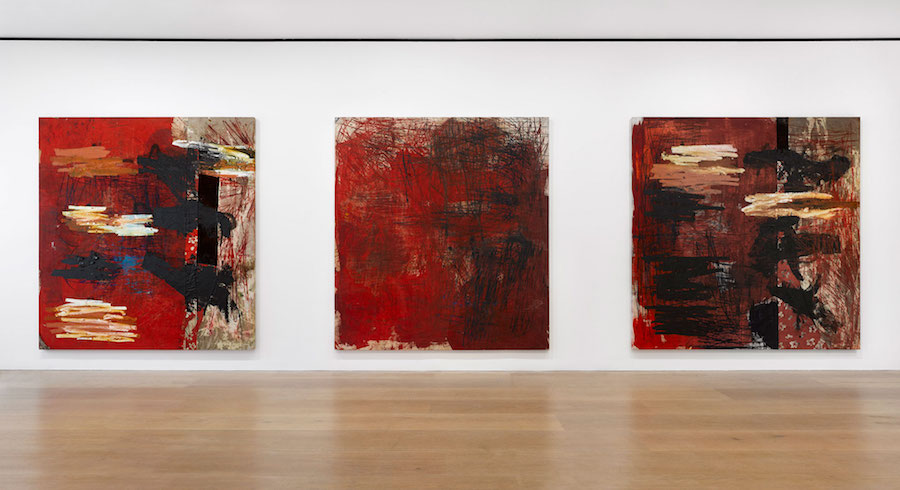 What does the Zwirner show have to tell one? Most of the show (there is one installation piece and some video) consists of mainly of big confident abstract paintings from Murillo’s new Manifestation series. The gallery press release describes them thus:
“The title ‘manifestation’ plays with the notion of signification and the creation of meaning. The word frequently holds a political meaning, being the most common term to describe a political protest in several languages. Thus the idea of physical presence or gesture also points to the act of using one’s body to demonstrate dissent in the face of power.”

About a different group of paintings called News, only one example of which is on view, the press release had this to say:
“In his News paintings, Murillo embeds into the composition a range of signifiers, some of which remain legible and others of which are totally obscured. Through an associative working method, the artist builds up layers of both found and invented imagery and phrases as well as gestural markings in intuitively placed planes, resulting in dense visually layered surfaces.”

What did I think of the display? I thought these were big decorative compositions, with a lot of visual punch. Technically they are innovative. As the press release also tells one, they are created by using unorthodox ways of putting paint on to canvas – for example by “saturating a skein of canvas with pigment, laying a second layer of canvas on top and using a stick or broom handle to transfer marks from one to the other.” Shades of Jack the Dripper! Pollock must be rotating jealously in his grave. Here is a new extension of his signature technique. 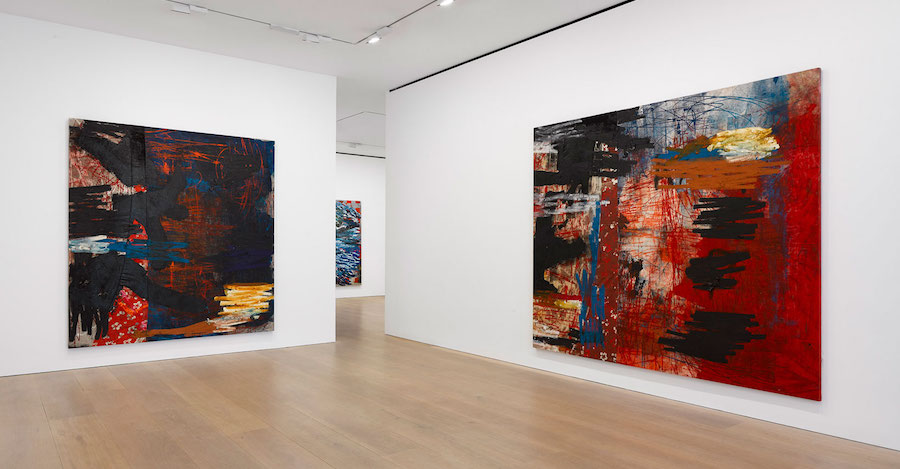 Oscar Murillo Was Born in Colombia in 1986,

Meanwhile, there can be no dispute that Murillo is now a cultural hero of sorts. The private view of the exhibition was jammed, and this is by no means a small exhibition space. It was packed out with people representing several generations and varieties of the international liberal elite. The problem was that they were mostly so excited, so it seemed, to be relating to one another that they didn’t have time to look at the paintings. The art was present to extend a polite hand of blessing to the occasion, but was there in the background, without any specific message to offer.

This, in fact, has been a problem of would-be political abstract painting, ever since the far-off days of Malevich, and particularly since the triumph of Abstract Expressionism in the mid-20th century. The Abstract Expressionists became a political force during the Cold War, but the political message was imposed on them by the American policy of touring their work in Europe, as emblematic of cultural liberty. When abstraction in art has no specifically restrictive situation to oppose, it has difficulty in formulating a message. If you want effective political art today, go to Banksy.

Murillo’s work will concurrently be on view in a solo presentation at Kettle’s Yard, Cambridge, in England (through June 23, 2019) and in a two-person exhibition with Tony Cokes at The Shed, New York (June 19 through August 25, 2019). Murillo has been represented by David Zwirner since 2013. This show is his fifth solo exhibition with the gallery.