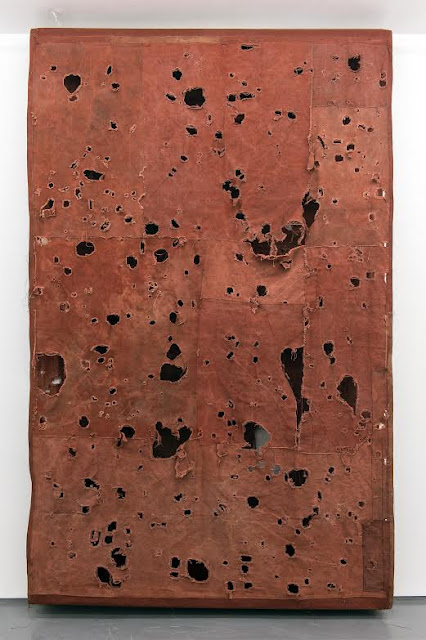 Simon Callery presents two types of paintings which – though categorisable as ‘flat’ – build up considerable interior space. The fold in the FOLD gallery comes from 125 meters of canvas rucked up to make the 75kg of Wallspine (Leaf), 2015. The other three large works are stratigraphic layerings built up at the archaeological sites which inspired them, their earthy tones considerably weathered by the practical necessity of being left out during the months of their formation on Welsh hill forts. The holes let into their inner voids are derived from the locations and shapes of artefacts found, but make, along with cutting and re-stitching, for a convincing exposure of process and excavation of painting. 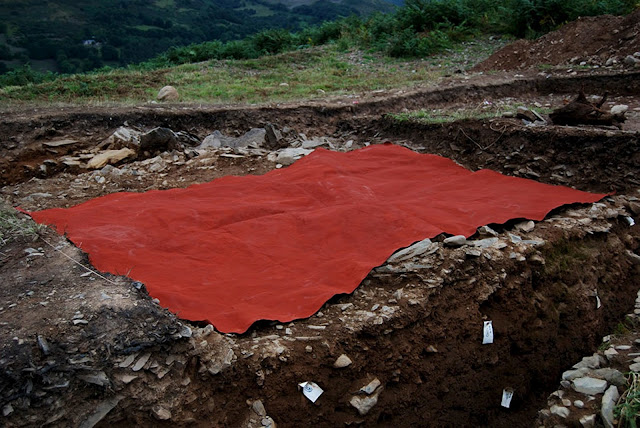 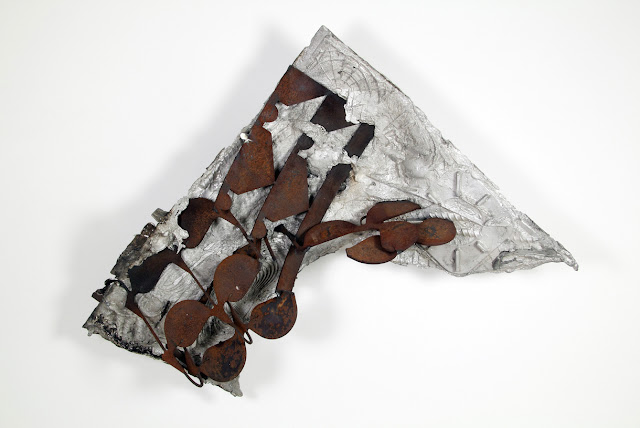 Sticking with the archaeological inspiration, this zappy Frank Stella retrospective includes to wall mounted scultures named after key sites in ancient Anatolia: Stella threw found elements into a sandpit, poured in aluminium and stirred to taste. They’re from an early 80s series mounted on rings which, unusually, allow them to be rotated so that they can be displayed stably at any angle. That aside, Bernard Jacobson makes the most of his capacious new space to show the 4.26m square Michael Kohlhass Panel #7 and the linked sequence of seven canvasses Die Marquise von O… which is – at over 13m wide – easily the biggest artwork within 200 metres (ie until you get to Ai Wei Wei at the Royal Academy). 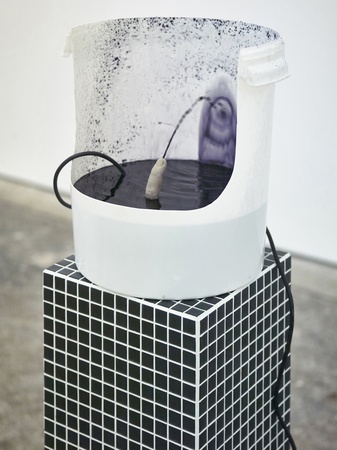 Chiming with that Stella,  LA artist Joel Kyack has a penchant for setting localised world records, mocking the Guinness Book (which, come to that, he claims to have thrown further than anyone, albeit without official recognition).  Gateshead’s Workplace as a supra-local outpost in London, currently showing Kyack’s sculptures – such as an endlessly spiralling balloon and a putple-watered start of the world Fountain which conjoins creation and urination – together with 10 new examples of Eric Bainbridge’s rather staisfying paintings using his signature material of synthetic fur fabric. He told me that this stream of production – less known than his fur sculptures – rather annoys painters, which makes them all the more fun to make. 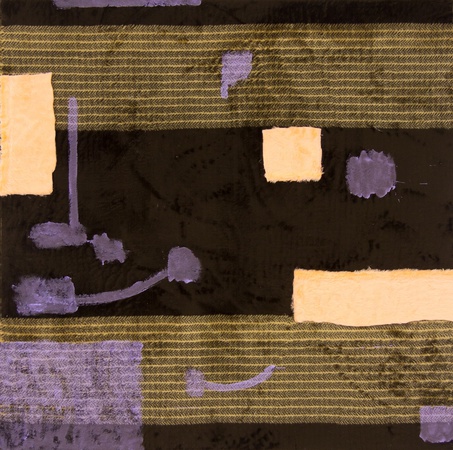 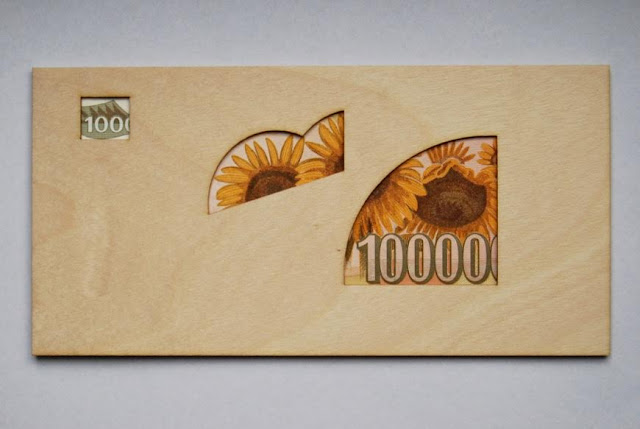 On the back of thirty years’ work emphasising our personal and social preconceptions, Gerard Williams shows thirty double-sided birch plywood tablets. Small windows are cut from each face to highlight  details of two or three banknotes enclosed within. This economical collision of art and value might ask whether, as Dave Hickey has put it, art and money are parallel cultural fictions – based on demonstrations of trust – which have no intrinsic value. If that’s the question, one answer might lie in the aesthetic interest which accrues from revealing evocative image fragments while turning the tableaux into compelling abstract arrangements. 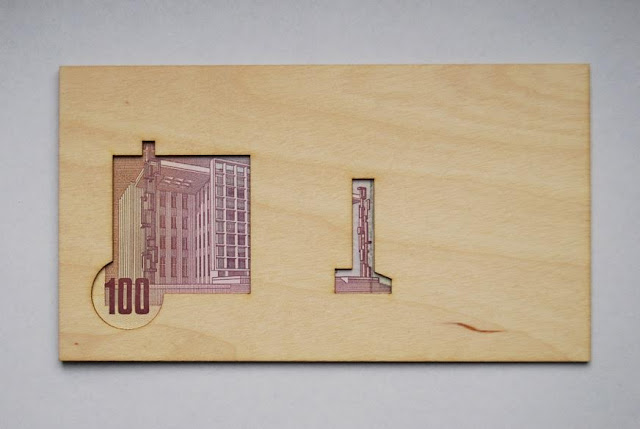 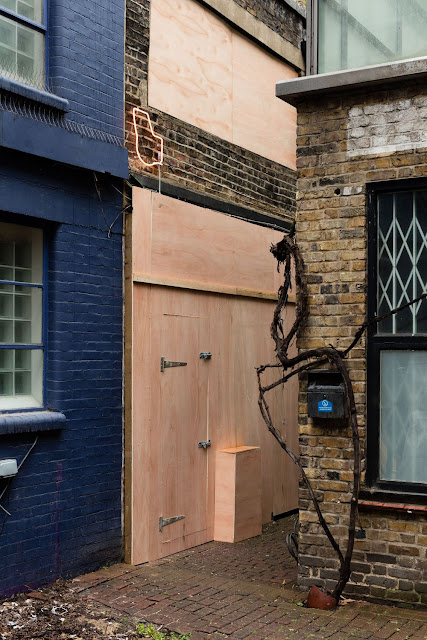 The three potential meeting spaces of Prem Sahib’s extensive and well-received ICA show each create clinical and yet intense atmospheres, and there is in effect a fourth at his gallery a kilometre north: Southard Reid is boarded up as if to suggest an unofficial occupation. A fading neon, the eponymous END UP,  flickers between a closing down or having reached a goal. Inside, you’re in changing rooms, complete with benches, gay scene magazines and new objects through which Sahib can apply his brand of sensual minimalism: several silicone rubber rolls of paper towels. 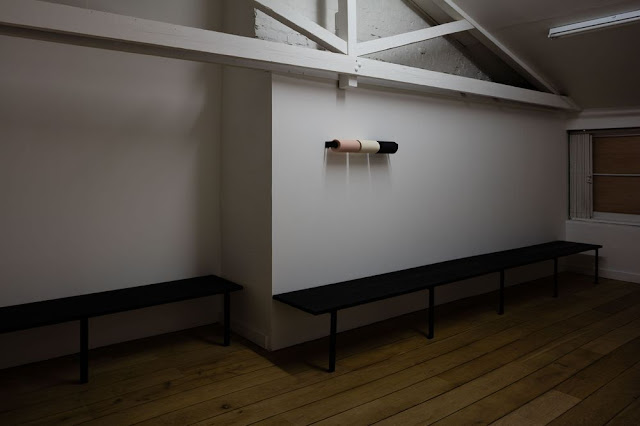 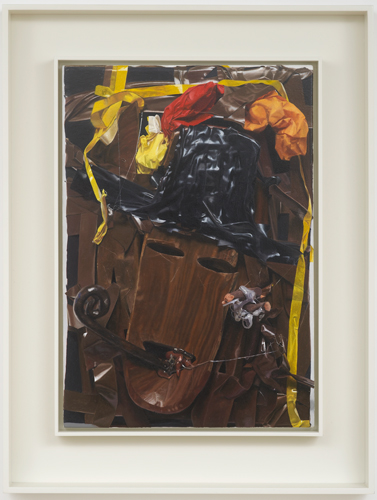 It’s ten years since Aberdonian Neil Gall showed solo in London: he’s still painting from photographs of the models which he constructs of studio bric-a-brac, but his sources have become less sculptural. The faces in these models, which cohere into caricatural types through a nice mix of strategy and accident, invade the viewer’s space with a flattened-up-close intensity. That’s enhanced by Gall’s uneven, paint-like use of varnish, which glistens sensually.  The title ‘Arrange your face’ picks up on the  Arcimboldoesque aspect, but is also a phrase common in Wolf Hall: that fits particularly well with the contrasting pair of ‘Nightwatch’ and ‘Cut-Out’, as the latter is an empty version of the former’s headspace, bringing to mind the iconoclastic smashing of the Reformation. 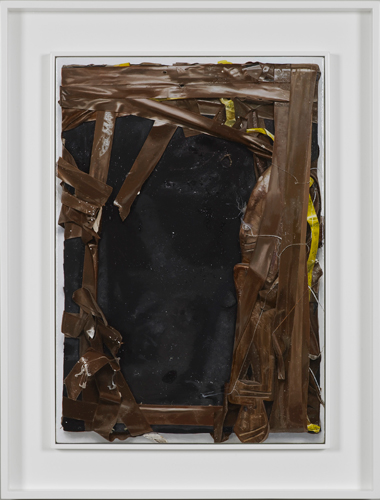 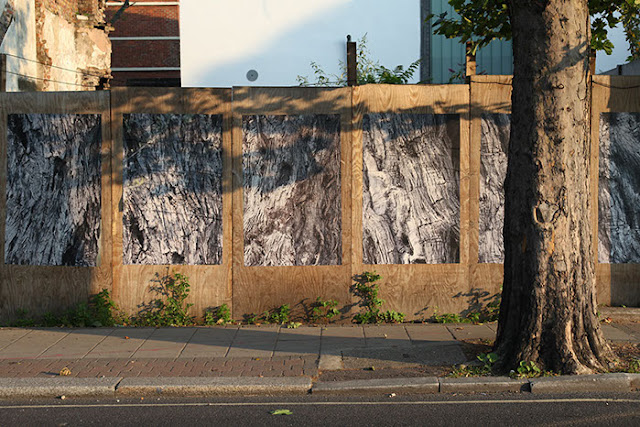 Olive trees on the street

This unusual show brings the history of London-based Turkish Cypriot Mustafa Hulusi’s flyposting practice to the gallery context, starting with late 90’s declamations of his palpably alien and then unknown name, merging it with disco effects to confuse more categories than just the fine art / graffiti / design divides. 2005 saw the debut of what became his graphic signature, the ‘expander’ which suggests heightened states of consciousness, be they aesthetic – as when paired with flowers – or otherwise. They were popular enough to stay on London’s sites well beyond their planned couple of weeks. More recently the sensual excesses of giant pomegranates and the Levantine image-as-ground of gnarled olive trees have taken centre stage. As well as posters on the wall, we get a documentary slide show and a broadsheet of further images. 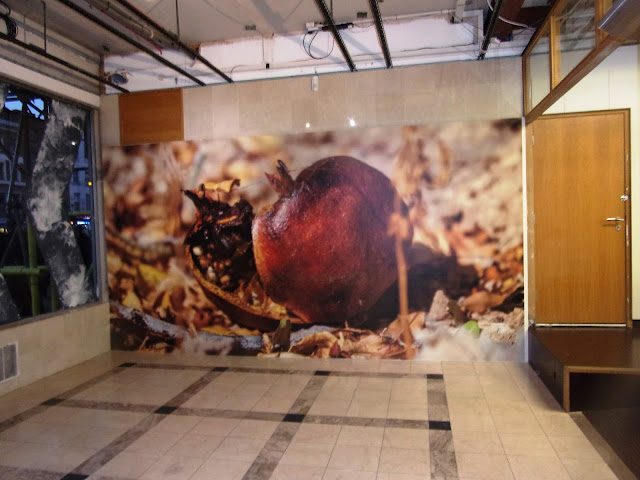 Pomegranate in the gallery 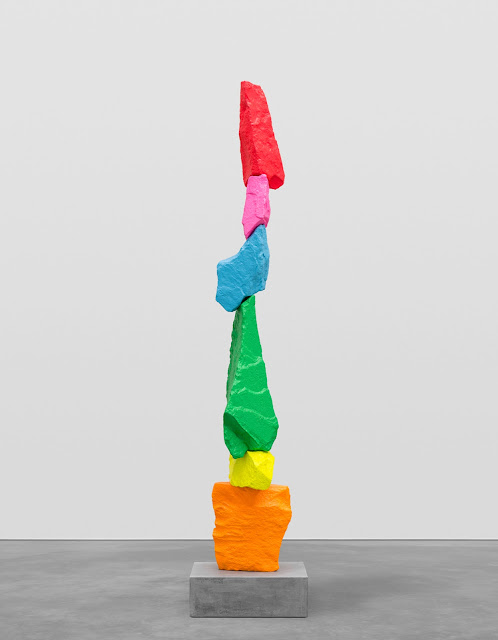 Ugo Rondinone isn’t one to do things by halves, and this elemental air-water-stone / natural-romantic-existential show is no exception. Against the backdrop of a dozen ethereal cloud paintings which shape meditative skies into upper borders of cumulus, the New York-based Swiss artist places 33 ‘mountains’ made of 3-6 rocks stacked vertically on concrete plinths, essentially abstract and yet sometimes suggesting figures as well as landscape. They’re painted in supernaturally intense Day-Glo colours, so that the whole ensemble has London galleries’ biggest current wow factor. The waterfalls stand apart from this: spindly aluminium cascades which look more like Indian rope tricks. 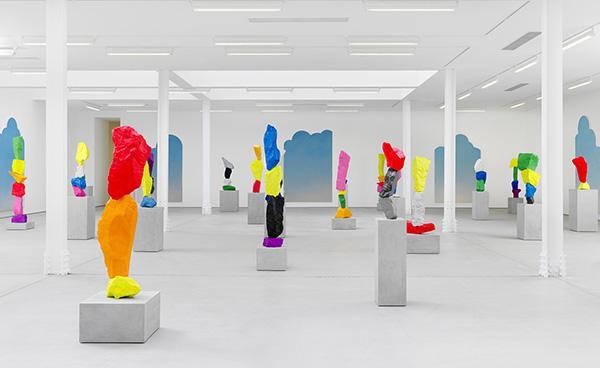 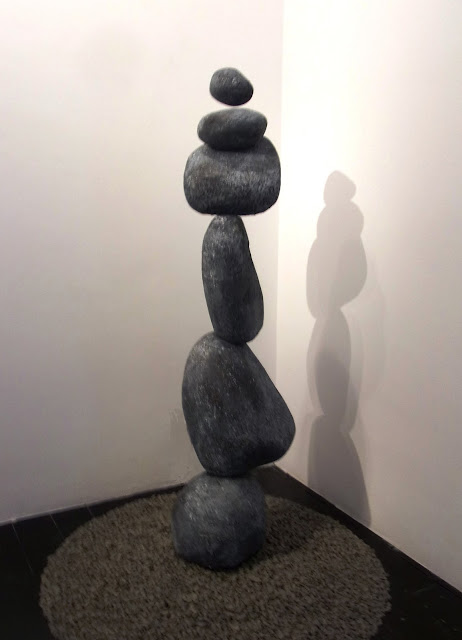 It’s hard – says its curator, modestly * – not to commend this perfectly pitched quincunx of sculptures by James Hopkins, each of which reconciles opposites or sets up a paradox Thus a flame burns in water, stone mounts a ladder or hovers in the air, black turns to white and the word ‘mirror’ remains the word ‘mirror’, even though it’s reflected in ‘the mirror’s mirror’.  That then, is the set of illusions – all with intimations of what lies beyond appearances, from the nature of reality to the shadow of death to the possibility of an afterlife. What’s more, ‘Out of the Living’ at Supplement Gallery, which is next door to Union, is also well worth seeing.. 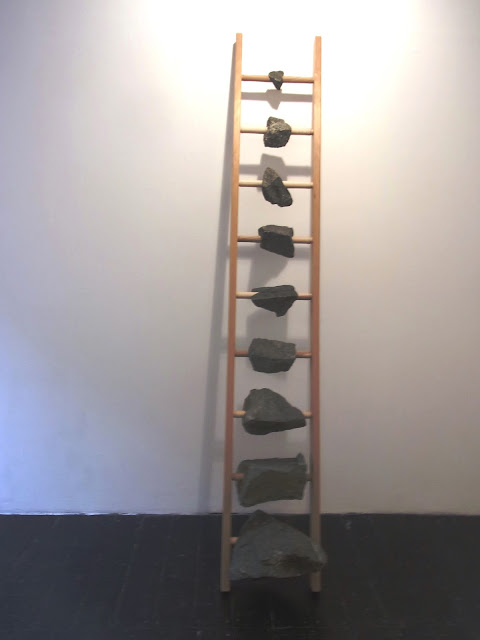 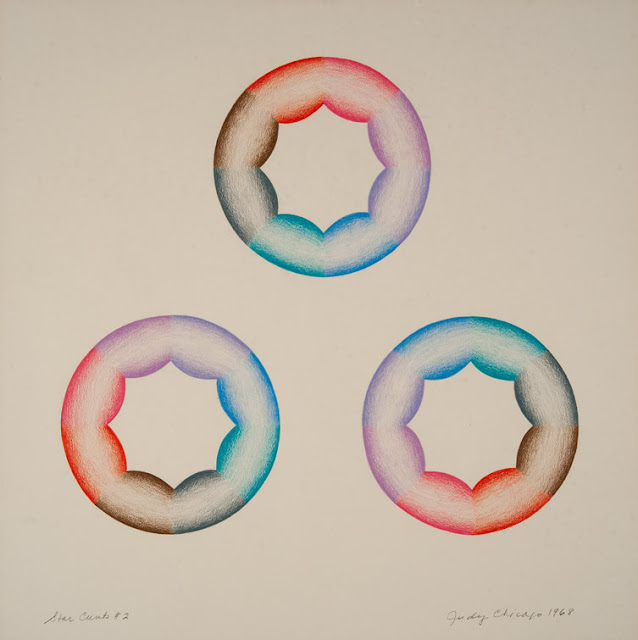 Star Cunts #2, 1969
This economical yet broad survey of the key years in Judy Chicago’s development sees her emerge as a ballsy counter to the ab ex norm in early sixties LA (with studies for the car hood paintings, now on show at Tate Modern) then slip into less combative abstraction before finding her mojo by applying the colour lessons learned to a series named for how male painters bonded through matey insults. ‘Well, I’m a cunt’, I take Chicago to be saying in these subtly orificial images, ‘but I’m going to be a star’. She then took on another taboo – narrative – and taught herself china painting (shown in a butterfly plate sequence from 1973-74), and fused attitude and technique to famous effect in the 39 place settings of The Dinner Party, 1974-79, represented here by test plates and some of the ‘goddess’ sculptural elements. 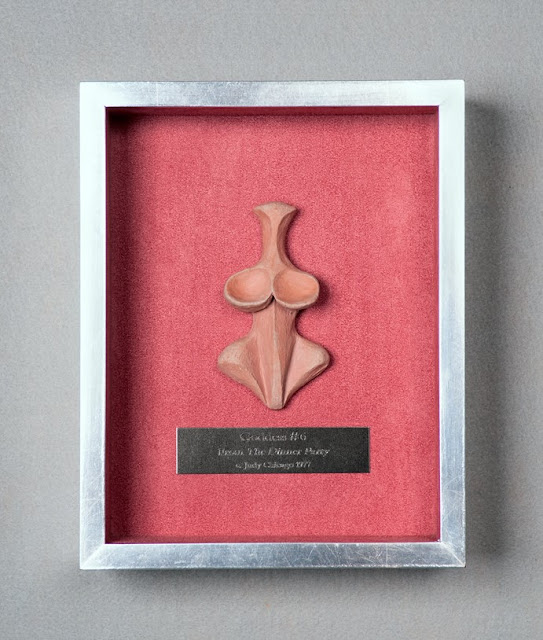 Moyra Davey: You’re a nice guy to let me hold you like this @ Greengrassi,1a Kempsford Road- Kennington (Top Photo)
To 24 Oct:  www.greengrassi.com
New York based Canadian Moyra Davey seamlessly melds tone and structure in her films and collages of photographs which have been through the postal system: the tone relaxed, casual, intimate, yet literary; the structure apparently rambling and accidental yet arriving somewhere nonetheless. Here the film sees her take off from  Derek Jarman’s last film Blue to pitch blindess, Borges, process, Anne Sexton, curtains, Julia Kristeva and  PJ Harvey into an evocatively meditative half hour. The postings use the functional chance abstraction of parcel tape, folding and stamps in making public traffic from the personal: coffee stops, the weather, old receipts, the thought that her dog defecating echoes herself giving birth in both pose and the urge to expel…