Now in London: Paul Carey Kent unlocks his choices of the best exhibitions in town in August 2016. 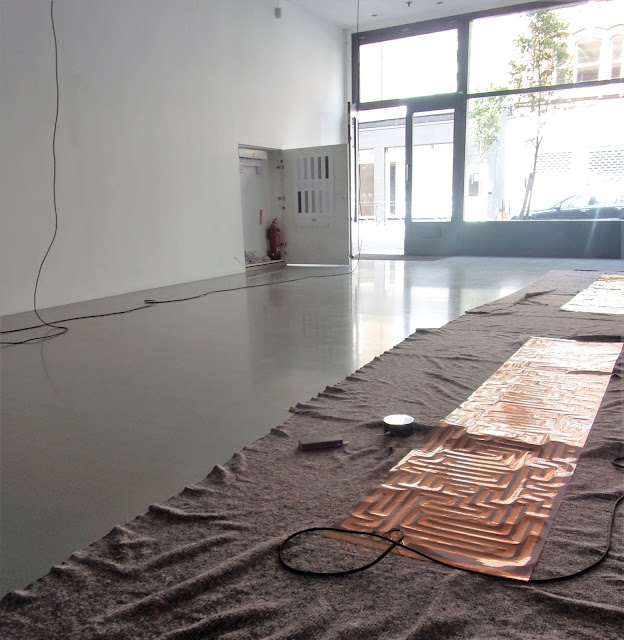 Entering Pilar Corrias, a well-established tease seems to be in play: have they finished installing the show? Of course, they have: the rather Beuysian combination of copper-clad heating circuits on felt packing blankets, together with digital counting units, isthe work; and the door of the cupboard containing the gallery’s electrical switches is open for a reason. New York artist Sam Lewitt is treating the gallery as a computer unit in the copper-coated units maintain the temperature, and those alarm clock displays show its recalibration in response to as vistors’ movements changing it. Global travellers have a parallel collective effect on the wider environment, connecting in turn to what the circuits can just about be seen to spell out, though it’s easier to cheat by looking at the diagrams in the cupboard: the Air B&B slogan ‘Belong Anywhere’. Downstairs, just as interestingly, Texan Lucy Raven meshes surveillance, film history, searchlights, Robert Smithson and institutional scrutiny in a looping rotocaster light projection. 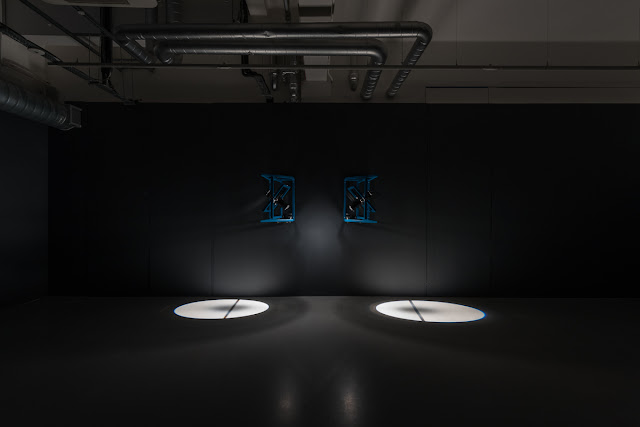 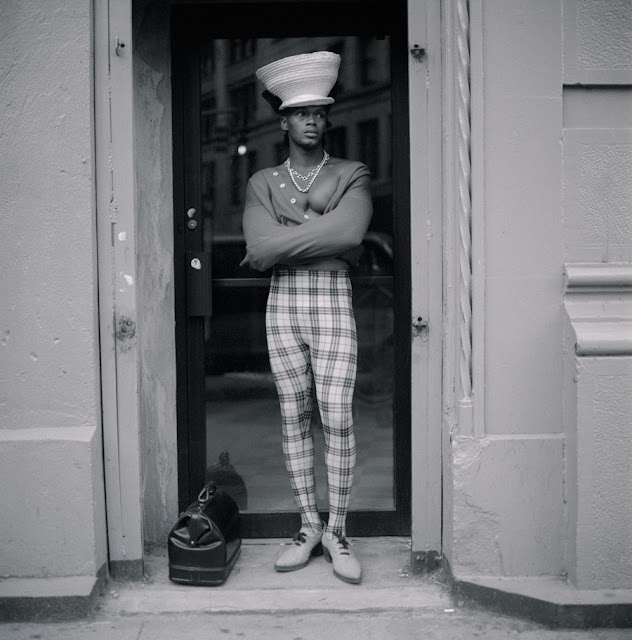 Jeffrey Henson-Scales, Young Man In Plaid, NYC, 1991
Introducing his show, curator Ekow Eshun summairses how black men can be both hyper-visible (due to racial stereotypes of criminality and sexuality) and yet invisible (in terms of their inner life and own concerns). That’s the context for images in which black men assert themselves beyond the constrictions of the white gaze as complex and flamboyant rather than other or estranged, and do so through a dandyism which is less a matter of fashion and pose than a  means of constructing a self-identity. Morrocan-born Hassan Hajjij’s extravagantly patterned friends framed by packets of local products, Samuel Fosso’s self-reinventions, Jeffrey Henson-Scales and Malick Sidibé are among the telling choices. 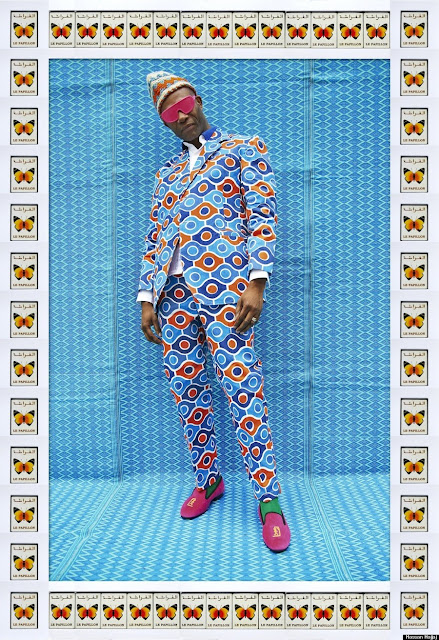 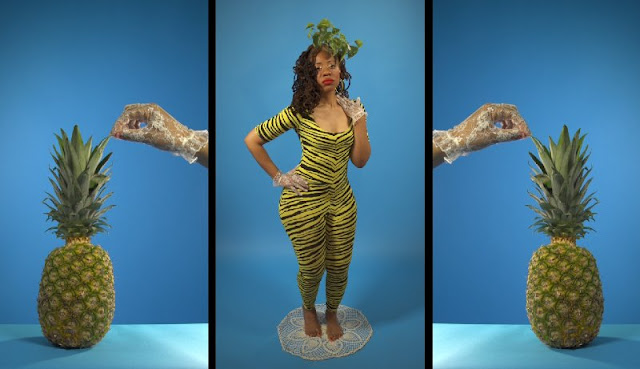 For a refreshing summer-themed show, try Tiwani’s annual hosting of an African Gallery: this year it’s curated by the founder of Nigeria’s Boys’ Quarter Project Space Zina Saro-Wiwa, who focuses on the cultural import of the pineapple (be sure to ask for her informative notes on each work). She contributes three short films of her own in which the fruit acts as a pendulum; gets chopped; and plays its exotic, stylish and sharp-leaved aspects into a performance by Ayana Evans. I also liked Odila Donald Odita’s apparently abstract pair of paintings which evoke a pineapple eating trip with the artist’s twin uncles, as shown in a snapshot alongside; Arlene Wandera’s evocation, voiced from a pineapple tin, of the thirteen cultivars of pineapple that have vanished in the past 150 years due to the commercial pressure for standardisation; Elizabeth Columba’s palpably modern self-portrait set as if she’s eating one in the times when they were prized rarities in Europe. 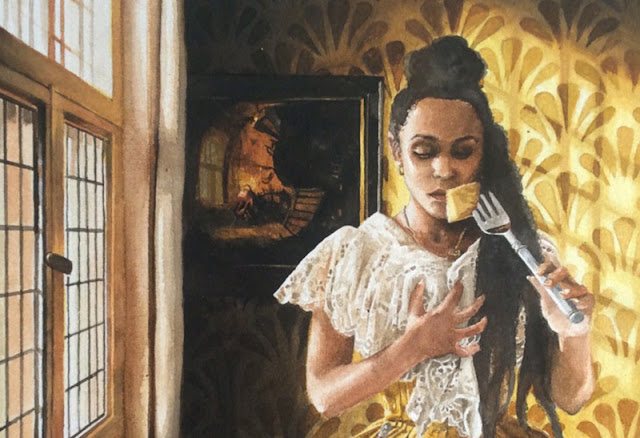 Elizabeth Columba: Through the Heart, 2016 (detail of watercolour)

Nevet Yitzhak: War Rug #3, 2014 – 8 min video loop
Textiles have been on the way up as an art material in recent years, but you want a show of them to do more than illustrate that  – as ‘Metatextile’ does by drawing a parallel  between form and content: just as  textiles challenge the hegemony of oil on canvas, so 15 large examples challenge social hierarchies and perceived value systems. We’re led off by the historic examples of Liubov Popova’s hammer and sickle design (1923-24: she found great satisfaction in a peasant woman buying her material for a dress) and an Alighiero Boetti Afghanistan-made Mappa from 1983. And the most interesting strands stay east; both Adrian Esparza and Nazgol Ansarina unpick and differently restore existing piece of cloth; there are two of Pio Abad’s series of silk scarves in which he preserves with almost perverse colour crispness the personal possessions of Ferdinand and Imedla Marcos;  and a digital version of one of the many ‘war rugs’ being made in Afghanistan , but with animated explosions turning it into a literal battlefield. 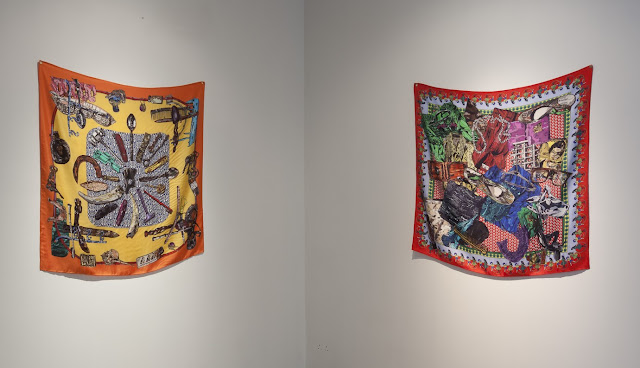 Pio Abad: Every Tool is a Weapon if You Hold it Right XXXVI and XXXVII, 2014 – acid dye print on silk twill 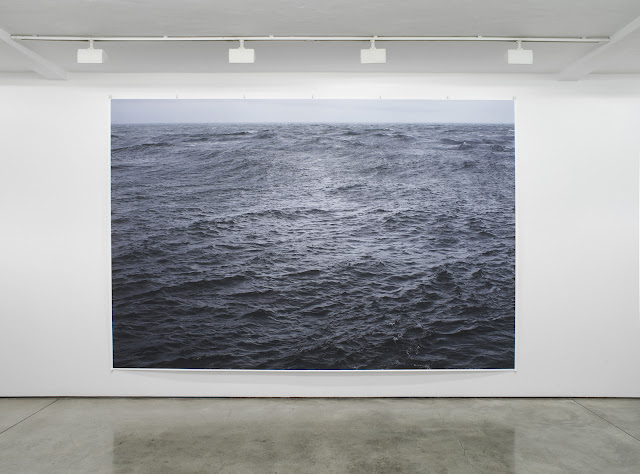 The State We’re In, A –  unframed inkjet print, 2015 – 273 x 410 cm – exhibition view, ground floor gallery
Here’s another show with a different atmosphere post-Brexit: Wolfgang Tillmans’ pro-EU posters take on a mournful air outside the main rooms, in which he orchestrates three clusters of works cleverly tied in to ‘the visible and invisible borders that define and sometimes control us’. The stand-out photographs are a huge print of the open water of the Atlantic Ocean where international time lines intersect, and an image of blood flowing through plastic tubes, outside of the body during surgery. Tillmans runs through his range of distinctive installation methods, including the table grouping used for his truth study center series (2005 – ongoing), here giving minimalism an imaginative twist by presenting various national sizes of blank office paper, which come across as more unified than you might expect. 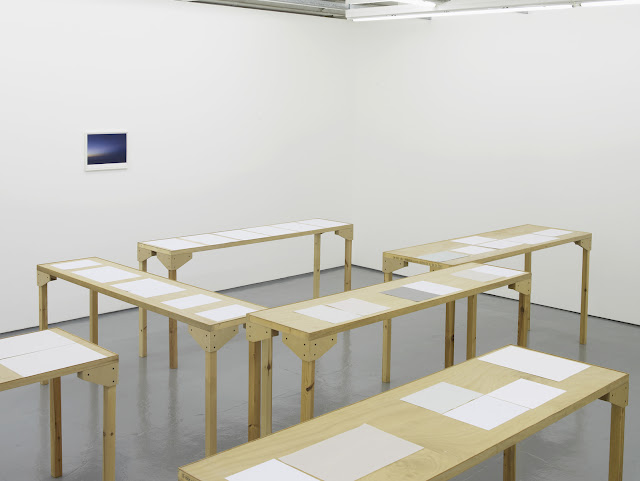 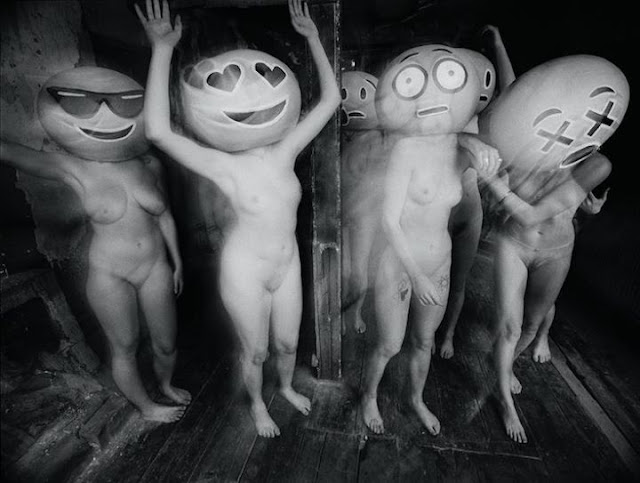 Charlotte Colbert shows 20-odd atmospheric photographs and a sharp 15 minute film. The former, looking like an update of Francesca Woodman’s aesthetic, see naked friends act out to camera wearing emoji masks in derelict settings. Strategic use of double exposure and blurring confuses the action and hints at the possibility of a dimension beyond.  The film, The Silent Man, is a sex-reversed take on the true story of Oskar Kokoschka, who ordered a life-sized replica of his muse Alma Mahler when she left him in 1918. Here a woman takes delivery of her potentially ideal, as maximally compliant, mannequin mate – but of course it does not end happily ever after. 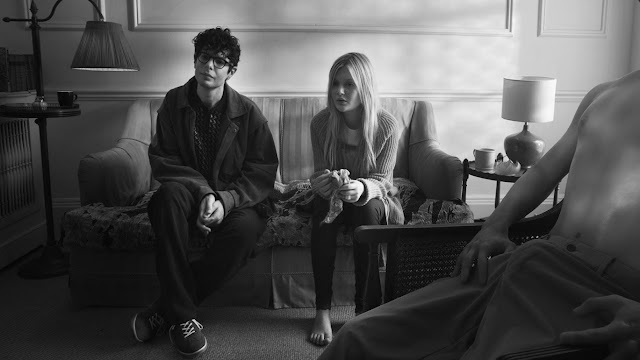 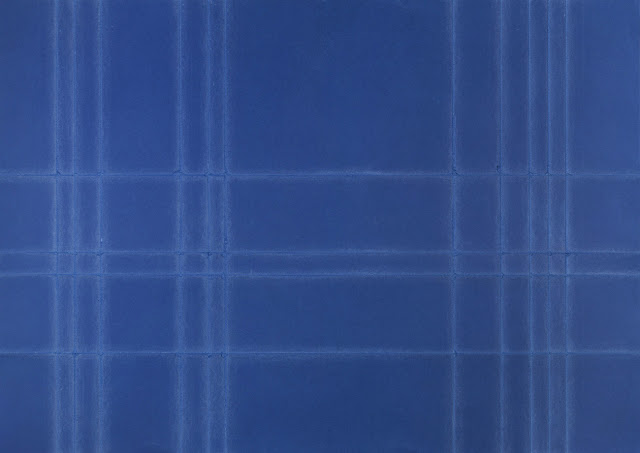 Labour + Repetition = Decay (no.9), 2015
Katherine Murphy gives obsession a political inflexion, as her labour stands in for the under-acknowledged toil of the many carrying out repetitive tasks in the broader economy. That’s explicit in her timesheet-based prints, but equally present in two new streams of work (and I mean work) in this, her first full solo show. The series Labour + Repetition = Decay requires the folding and unfolding of paper over several weeks to reach an aesthetic of ditressed geometry. For Decay by 100,000 pinholes Murphy has pricked as many as that into a large piece of paper, using a decreasing number of random numbers to decide where to pierce, so that ‘blank’ patches increase towards the right. That was six months of labour for – even if the piece is sold – no more than pin money. 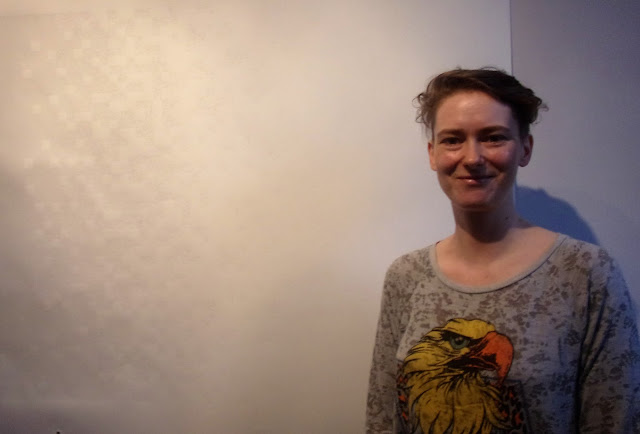 Katherine Murphy in front of thousands of holes, not easily spotted in a photograph
______________
Overlay @ White Rainbow, 47 Mortimer St – Fitzrovia 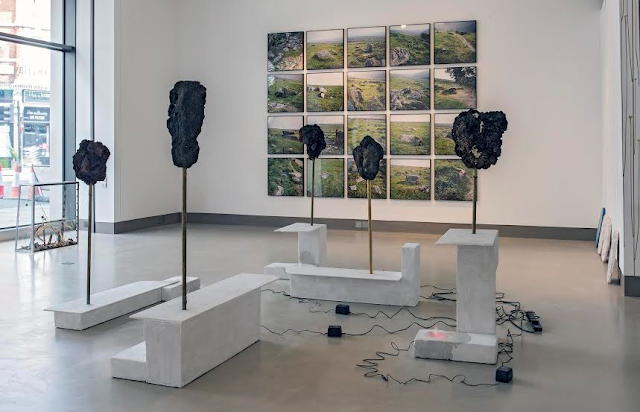 Installation view with Zoë Paul’s Moths and Lizards, 2016, in front of Nancy Holt’s Trail Markers, 1969
In the inspiring presence of Nancy Holt’s Trail Markers, four young artists pick up on its aspects of journeys, materiality and sexual roles with an underlying contrast of natural and artificial. Cathy Haynes constructs an alphabet out of plastic imitation wood, each letter framed in real wood faked to look like oak; Claire Potter films herself in male action mode but taking mockingly little action; Zoë Paul plays with ritual through volcanic rock faces, marble staging, and mist machines; Hannah Lees explores wine as paint, incense as a sculptural element, and the detritus of river walks as content immured in plaster. The whole creates a subtle but immersive interplay: kudos to curator Jeremy Millar as well as to the artists. 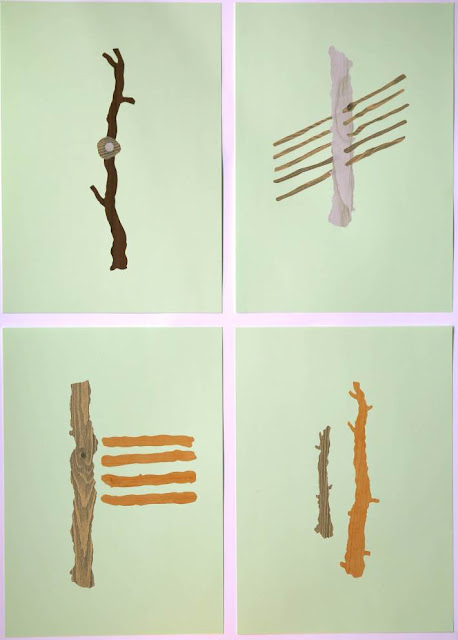 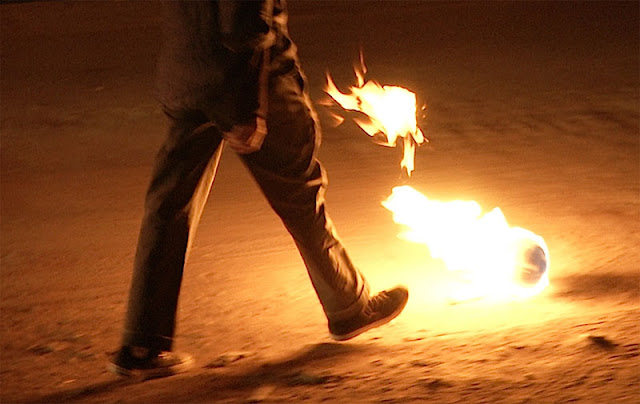 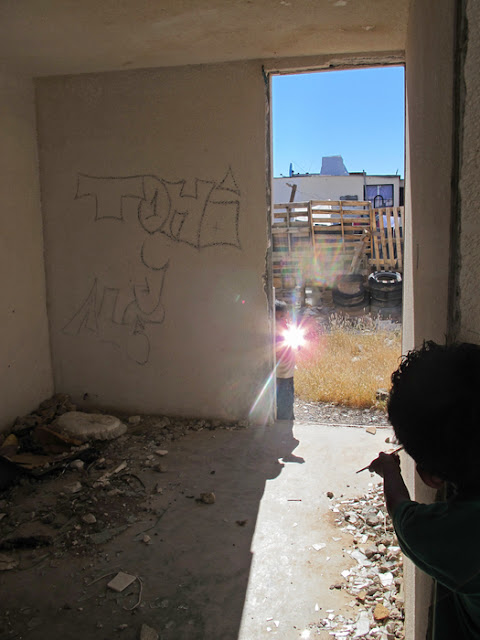 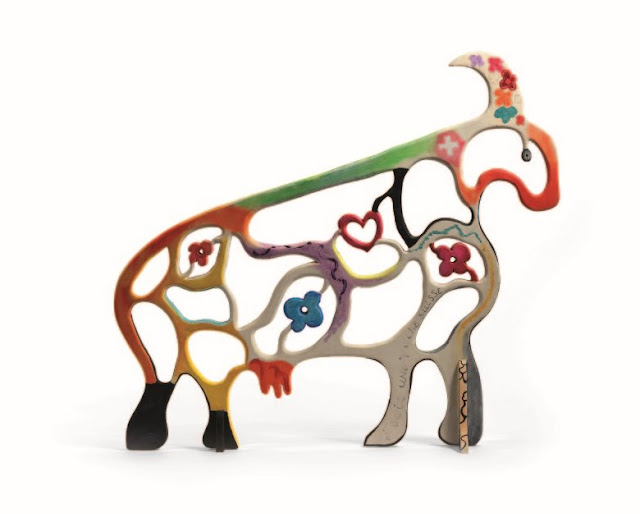 Je Suis Une Vache Suisse, 1991 – oil, pencil and mirror on wood, 99 x 96 x 20 cm
There are some superb historical shows on at the moment: Louise Nevelson at Pace, Jean Dubuffet at Timothy Taylor, Gego at Dominique Lévy…  Less obvious, perhaps,. is this co-selection with the Yorkshire Sculpture Park of  Niki de Saint Phalle (1930 – 2002). It’s seeded with darkness, All Over being one of the collages of everyday items (somewhat akin to Mike Kelley’s later ‘Memory Ware’ series) which she stated making while in a mental institution following depression and prior to her famous shooting paintings. Omitting those, the show fast forwards to her brighter and more animalistic side, including the eponymous Swiss cow with cheesy holes; her usual fun with birds and snakes; and the plaster work showing her friend Clarice Rivers (Larry’s wife) pregnant – which was to swell into the Nana series. 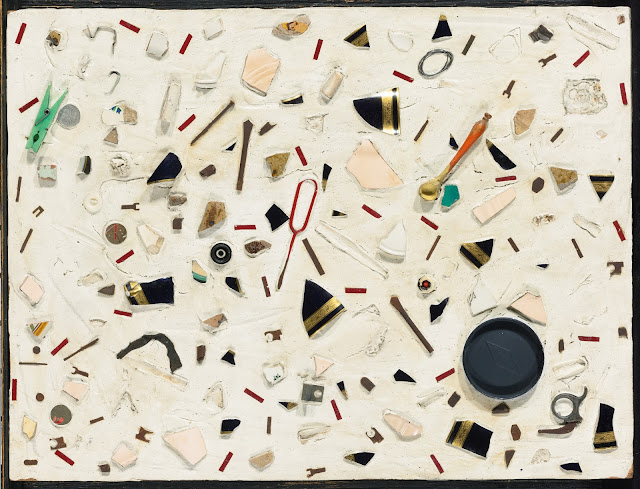 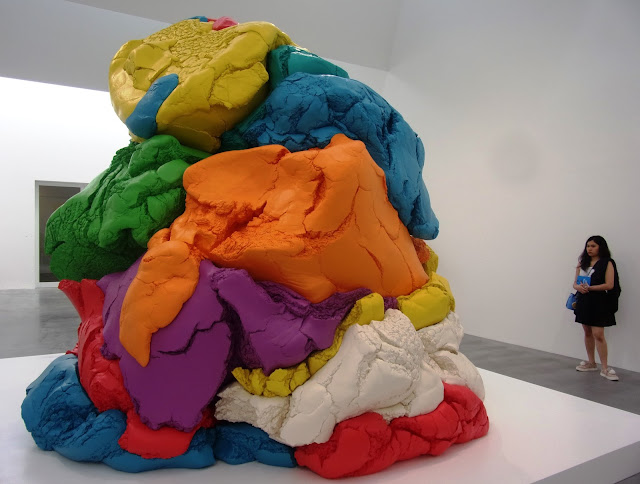 Damien Hirst, in his more than impressive new space, provides a punchily presented and much less predictable overview of Koons than I’d expected: hoovers and basketballs present and welcome, but also early inflatables to tee up the later stainless steel blown-up big ‘can’t-believe-it’s-not-vinyl’ ones; a bigger balloon ‘celebration’ than has been shown in London before; giant eggs as well as Jeff’s own sperm on Illona’s face; the 27 aluminium casts which make up the monstrous child’s play of ‘Play Doh’… 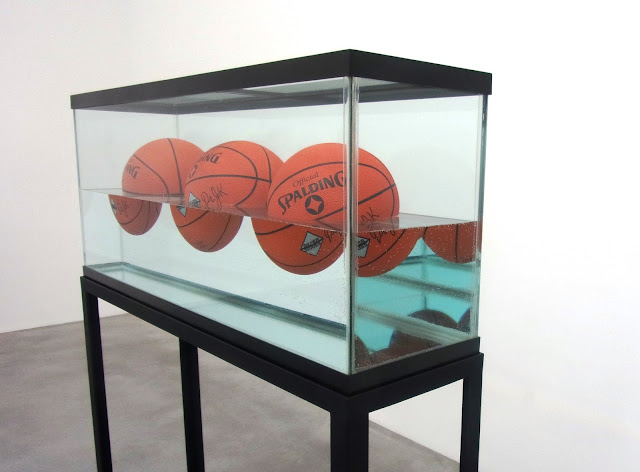