Skyscrapers cluster along the Wilhelminakade along the river Meuse, where the Object design fair took place in the stunning new  Rem Koolhaas building

Art Rotterdam (6-9 Feb 2014) is the primary national opportunity for the Netherlanders to showcase their own artists and galleries, and both are good. Logic, then, dictated that I make a ‘Double Dutch’ selection: Dutch artists shown by Dutch galleries. My first choice is obvious, and initiates what emerged as a sub-theme of human interaction with nature. 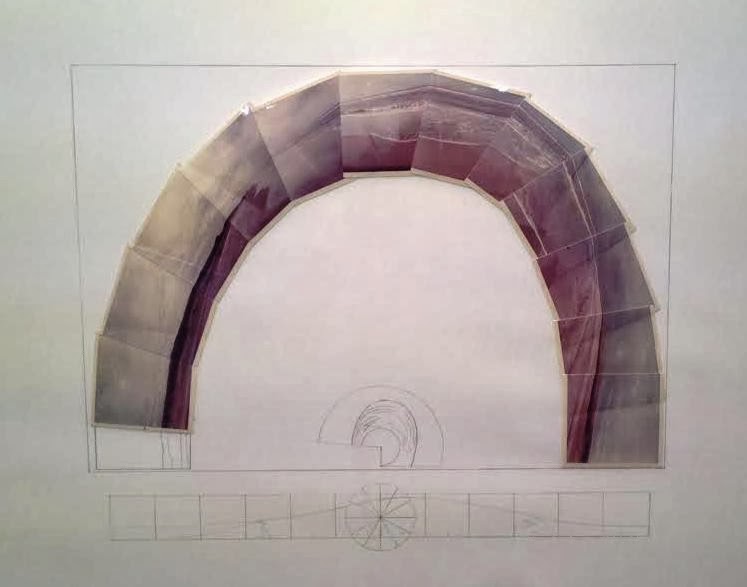 Jan Dibbets (born Weert, 1941) has been creating a dialogue between geometry and landscape since the late sixties, most famously through his ‘Perspective Corrections’ and tilted versions of sea and land, all consistent with his view that what counts isn’t taking the photographs, but thinking about them – that, to put it more bluntly, ‘nice pictures are the problem’.  This comically extreme account of the subjectivity of the horizon tracks a Dutch beach across a dozen 15% slices, and records its own logic by way of studies within the study. The resulting curve  is, the title suggests, as close as the Netherlands is likely to get to a mountain region. Melanie Bonajo: Matrix Botanica – Biosphere Above Nations at Akinci, Amsterdam
I’ve previously been struck by Bonajo’s ‘Furniture Bondage’ photographs, in which she puts herself in somewhat Freudian thrall to the domestic environment. Currently a resident artist at PS1 in New York, she won the Dutch ‘MK Award’  for a twenty minute film in which she speaks, composes and sings as nature, urging us to imagine ourselves as plants (‘a year and then bloom! – think of the sensation – and everyone would see it!’) and counselling against ‘those humans who treat relations with nature like a one night stand’ when ‘if you see your relation to nature as a relation to your own body – could you have a one night stand?’. Bonajo pulls off the fey charm of this through the cutely accented sincerity of her delivery and the glorious fantasy costumes she and her protagonists wear for ‘re-earthing’ rituals in which tribal tradition meet contemporary art bricolage. 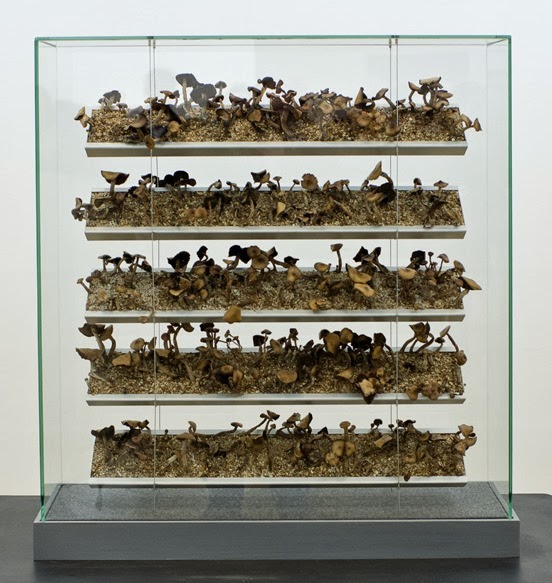 A Glance Through the Shades was originally shown across museum windows as part of exploration of unusual interactions between humans and environment. That fitted well with  installation artist Zeger Reyers’ preferred theme of how we change our surroundings by manipulating nature, in the course of which we become somehow alienated from the natural by how we distort it. Moreover these mushrooms,  which Reyers has preserved at the point of just starting to wither, are an hallucinogenic variety, so there could be a metaphor for artistic inspiration built in to the screening off of the world outside.

‘We Like Art!’  was a subsidiary gathering of work under €1,500 which – unlike many such – was of comparable quality to the main fair alongside, and featured many of the same artists.  Annagret Kellner seems an interesting figure: blogger, curator, partner of cloud-making photographer Berndnaut Smilde (show forthcoming at London’s Ronchini Gallery), and with a sense of humour evident in both this neat and environmentally sharp on the laziness of plants (laid on the floor and rotated) and her taking part in Daan Samson and Jeronimus van Pelt’s project at Amsterdam’s Torch Gallery which depicted ‘the most delectable babes in the field of contemporary art’! 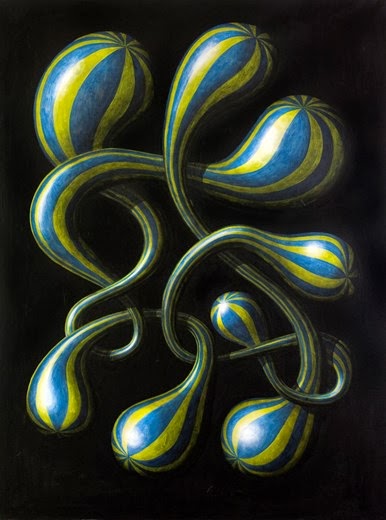 Dutch-born artist and musician Peter Schuyff came to prominence as one of the Neo-Geo painters in New York in the early nineties, but moved to Amsterdam a decade ago. For some years his practice has included generating the rhythm for geometries from the found paintings over which they are painted. His most recent work, on view here, sees his motifs escape into their own, more sculptural, space. These snake-club-melons are  lively yet mysterious, not such an easy combination to pull off. 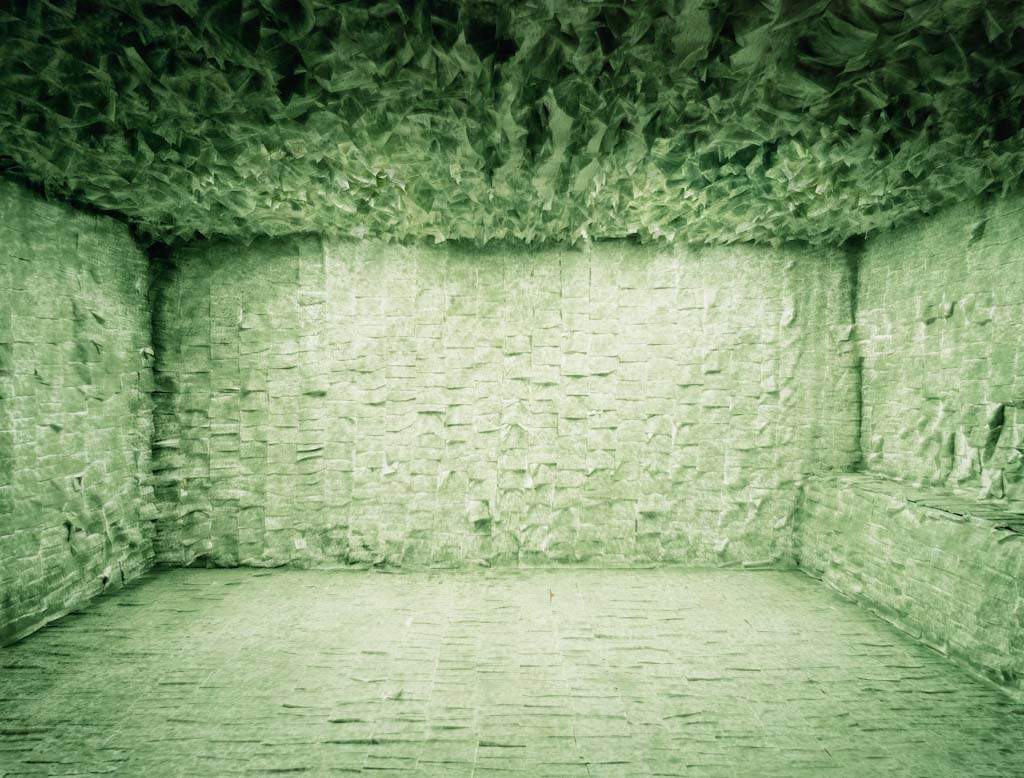 Marleen Sleeuwits:  Interior No. 37, 2013 at LhGWR, The Hague
Marleen Sleeuwits builds environments in order to photograph them, here using paper towels. Until recently that was one at a time, but for 18 months now she’s had the rare chance to work simultaneously a vacant sixteen storey office block in The Hague. She says she explores ‘places with which it seems you are unable to make any connection’, trading on the sense of in-betweenness which Marc Augé found in ‘non-places’ to yield abstract environments, ambiguously placed between digital and real, with strong emotional resonances: mental spaces, if you will. And new at the Fair was Sleeuwits’ first foray into sculpture shown as itself, not photographically… 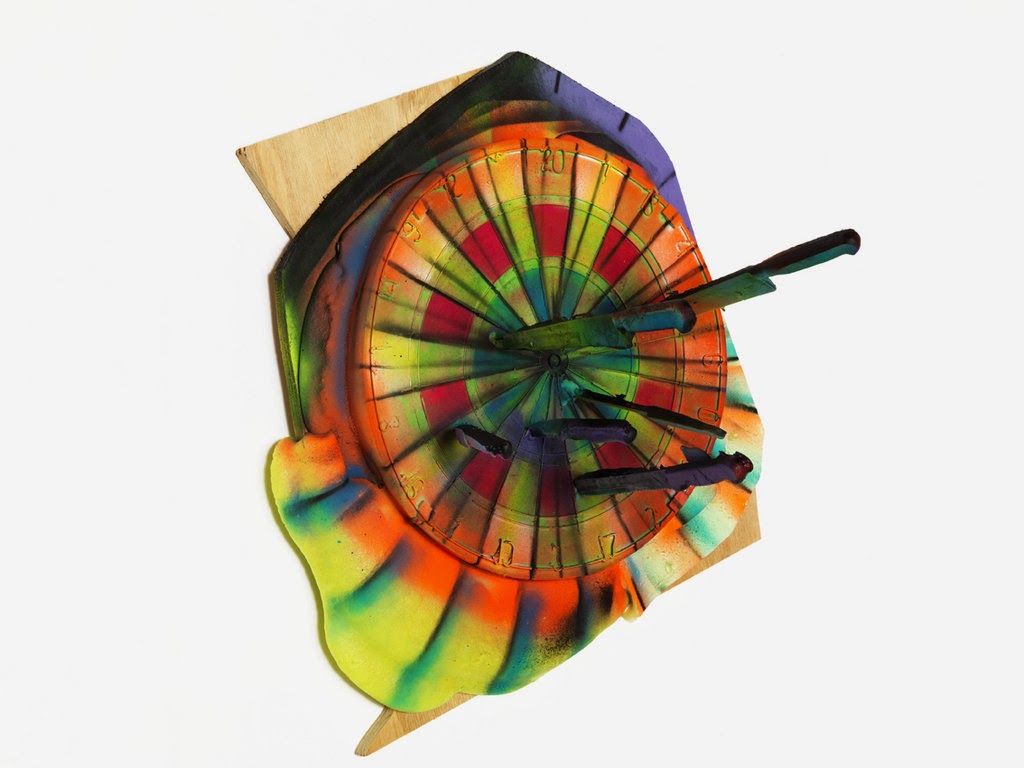 What’s this, the violent and psychedelic story of a darts player’s descent into madness? Maybe, but Folkert de Jong often focuses sardonically on being an artist so it makes sense to read this distinctive polyurethane foam work in that light, as referring to the extremes an artist may be ready to go to in order to come out on top in the competitive world of art, together with the combination of luck and skill which is required. Or maybe it’s just a murderous distortion of abstract ways: prime target, Kenneth Noland. 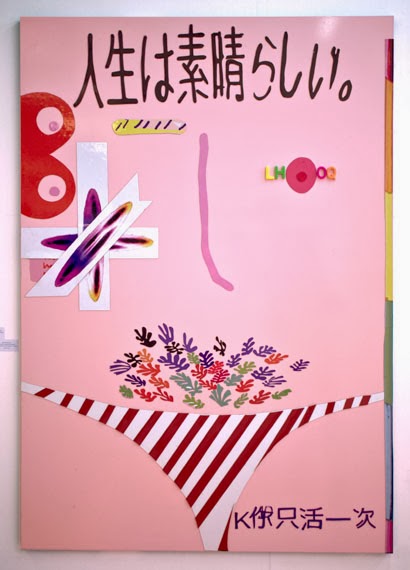 At just 22, Bob Eikelboom has already explored three ways to undermine the monochrome. First, he made his paintings shiny and rounded so that the uniform surface picked up reflections – there was one of those in adjoining display of the 92 artists who received grants from the Mondrain Foundation in 2013. Second, he curved rectangular monochromes across at the top, so that the variable self-shadowing caused colour differences. Now, he places car magnets over a monochrome field, insouciantly sampling and reusing art history so that, for example, Matisse’s leaves become unruly pubic hair. Visitors weren’t encouraged to move things around, but if you buy one then Eikelboom very much sees that as part of the process of undermining the traditional sanctity of the work. .. 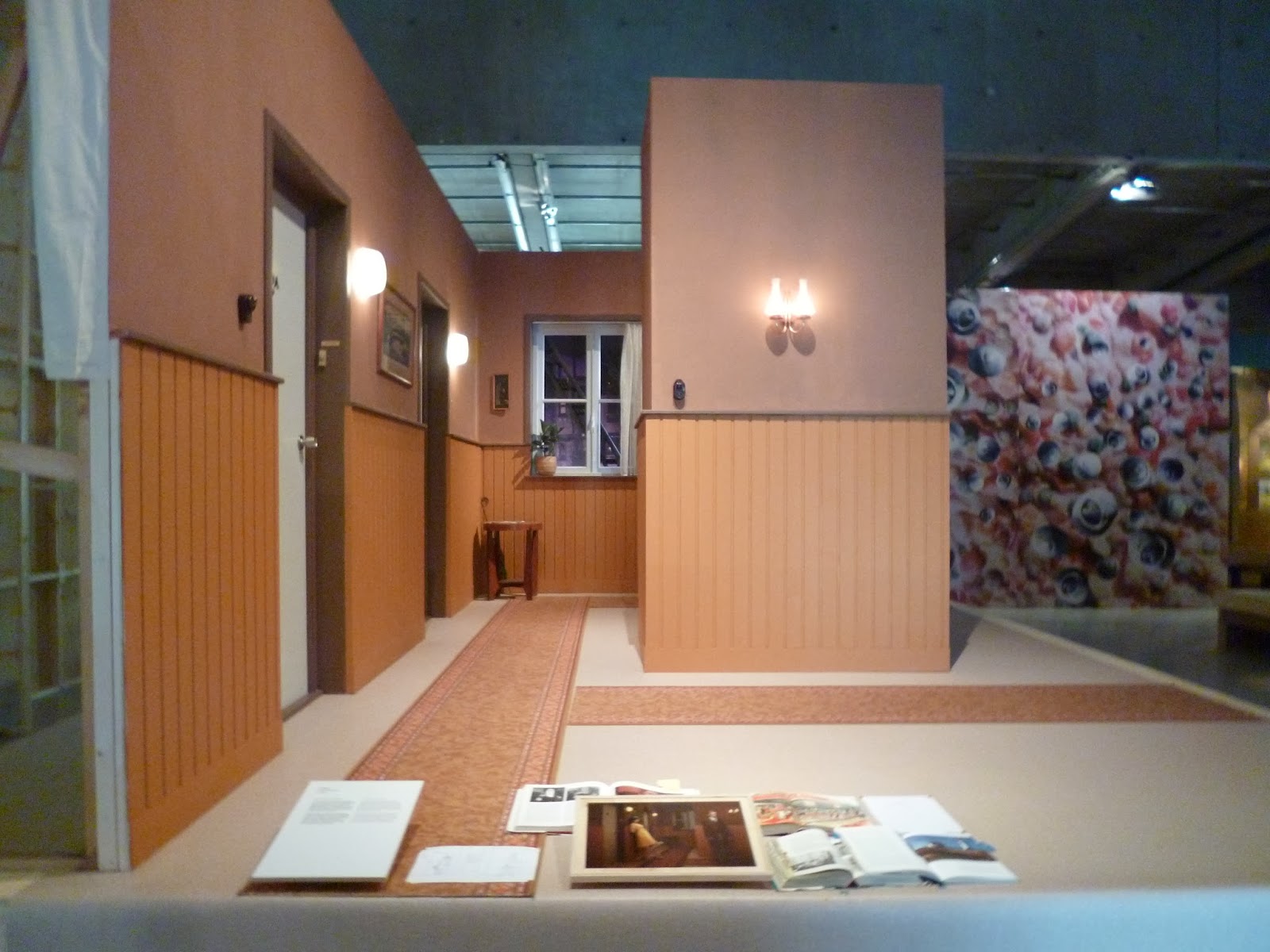 The double Dutch highlight among the museums was highly unusual: the architecturally oriented and architecturally stunning New Institute showed just how far Erwin Olaf follows through on his view that in making his staged narrative photographs of the suspended moment when an emotional reaction begins, he has ‘no interest in reality’: it presented six of the elaborate, life size sets built for him by Floris Vos. Background research, diagrammatic sketches and Olaf’s  commentary on the themes were also provided – in each case leading to just the one final image. Here’s the set and outcome for a 2005 shot, set in the 1960’s,  which now looks a little like a Madmen prequel. Not only that: 15 walls of artists’ wallpaper were also included (the sharp-eyed might spot Sarah Lucas’ Soup above right), along with a very slick technological set-up to enable visitors to get their own designs onto a spare wall with gratifying immediacy. 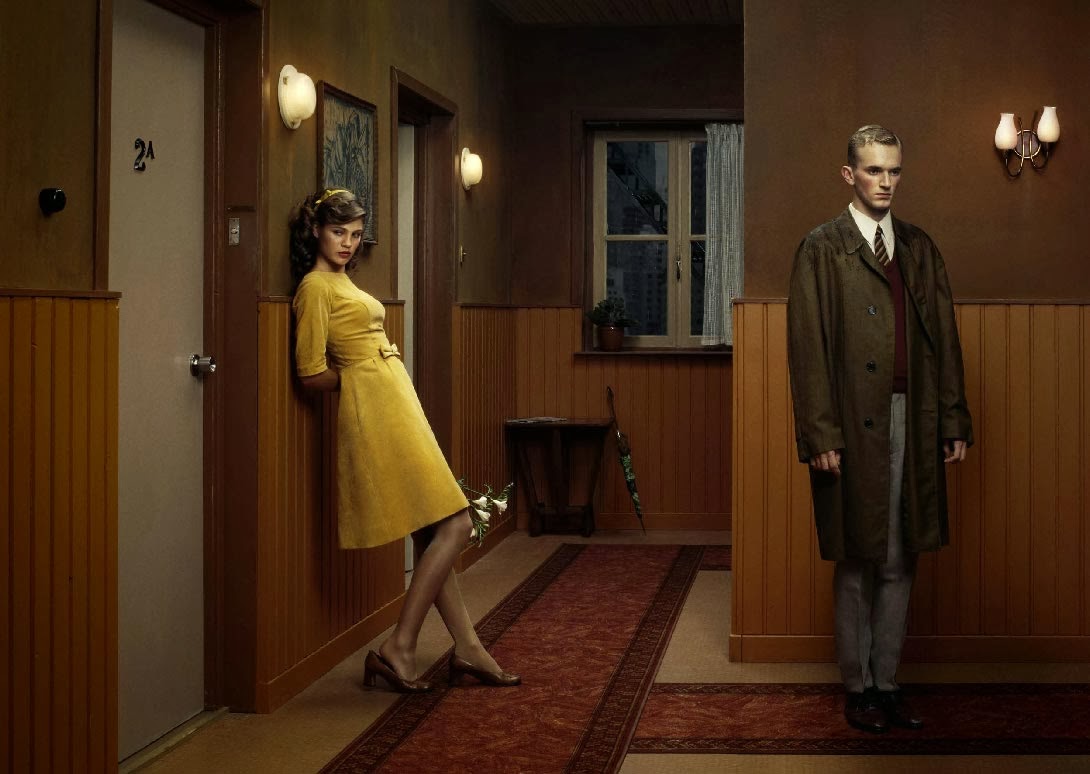 Another Dutch highlight was Anne Wenzel’s immersive and impressively scaled gathering of vanitas ceramics at TENT – not that the home team had all the best institutional moves, Belgium (David Claerbout’ s new film at the Fotomuseum) and Germany (Sabine Hornig at the Museum Boijmans Van Beuningen, which also featured Medardo Rosso, Brancusi and Man Ray’s sculptures alongside the artists’ own photographs of them.  On the other hand there was Witte de Witte’s  forty-strong group show ‘The Crime Was Almost Perfect’: the show wasn’t even close. 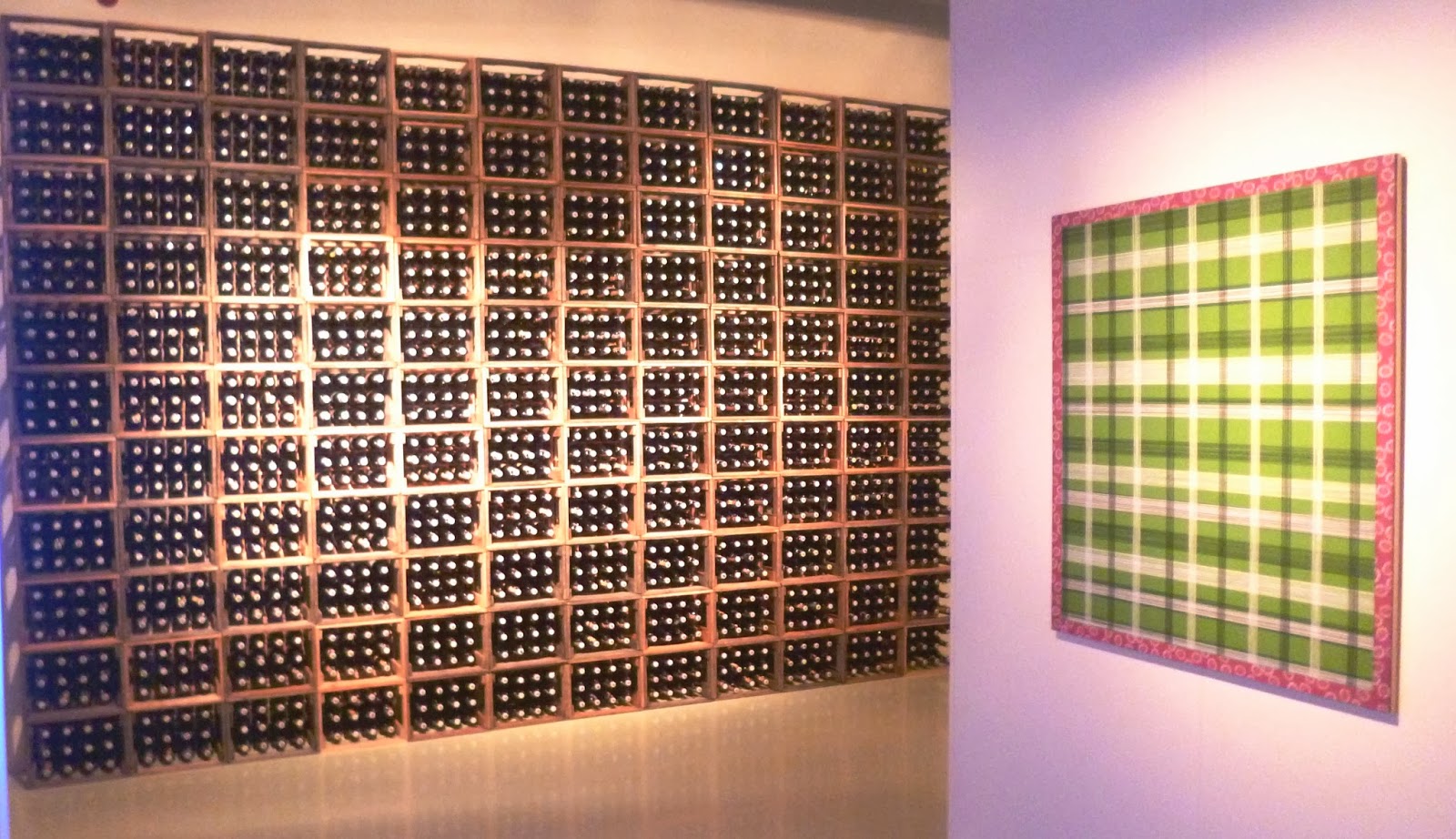 The Stedelijk Museum Schiedam has replaced one eccentricity – until recently you could enter only via the basement – with another: the labels in its 100 work, 60 artist survey of Dutch art since 1945 could only be read by treading on a foot pedal which illumined the text. That novelty soon palled, and it can be thirsty work anyway. Welcome, then, to Jan Henderikse’s Kratjeswand (‘Crate Wall’). The Delft-born co-founder of the Dutch Zero group in 1960 is a considerable assembler of life’s basics, from bales of shredded banknotes to golf balls to this 12 x 12 x 11 grid of 1584 bottles of beer, cunningly placed near one of Daan van Golden’s  formally similar  handkerchief-like abstracts. 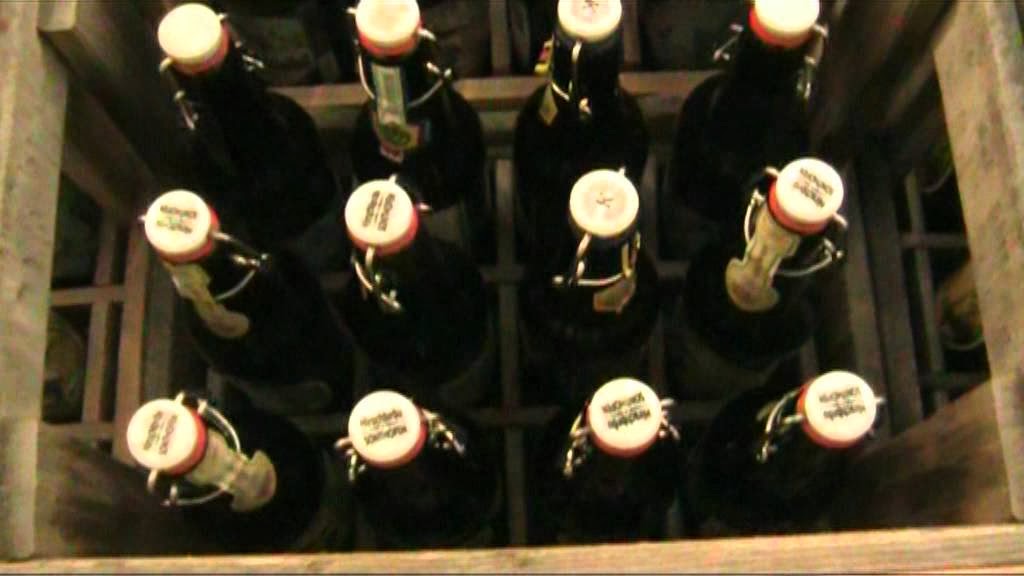 Were those Henderikse bottles a participative work?