Paul Carey-Kent curates his choices of London art exhibitions for March 2016. His rolling ten recommended contemporary art shows are all on view now. 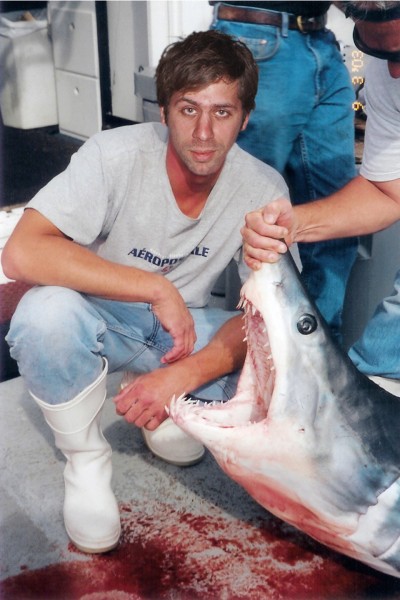 In this satirically simple satire on male irresponsibility, the French artist Thomas Mailaender  tells the story of a man abandoning his wife and child in order to find himself through a series of physical and sporting challenges. He writes home, boasting of his exploits, declaring his undying love and moutiing bafflement that he gets no replies. Actions speak louder than words, and each letter has a photograph of his triumphs – landing a shark, say – for which Mailaender has digitally inserted his own face onto images found on the Internet. The artist wasn’t at the opening, as he was off skiing with his wife and children – demonstrating his contrasting responsibility or paralleling it by abandoning that to his gallerist? I don’t think she can complain, as you can see the same material in a different installation in Performing for the Camera at Tate Modern. 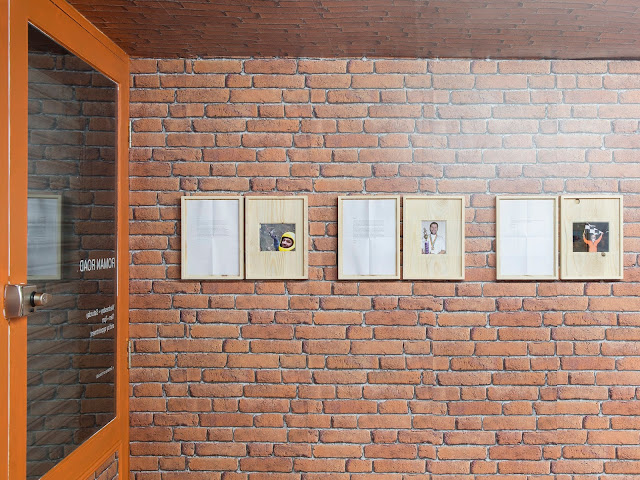 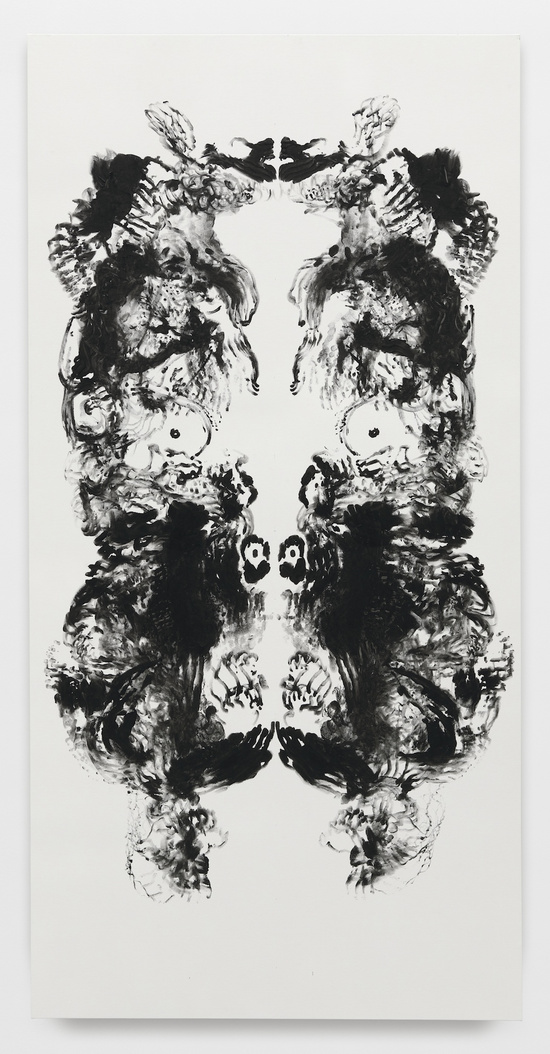 Mark Wallinger’s first solo show for Hauser & Wirth fills both impressive spaces and gains traction from how several works build to a vision of the self – not as straightforwardly unified, but rich in variant perspectives. One gallery is full of the 3.8m high ‘Id Paintings’ which explore the tall dark format of Wallinger’s versions of the I from different fonts, but with expressionist gestures applied with the hand and laboriously replicated in Rosrchach-like way.   The other contains the superego of a giant mirror revolvingon high, national identity linked to revolving views of an oak tree on a roundabout in Essex, and the artist as flaneur seen only as the shadow which precedes him through the city as he walks to experience it. 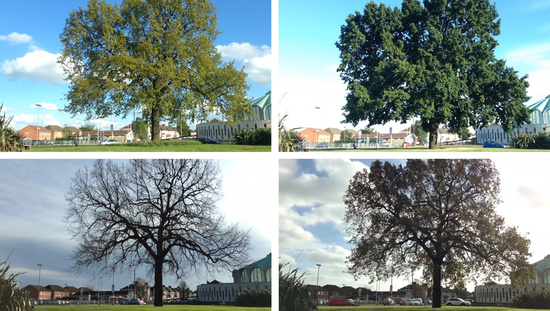 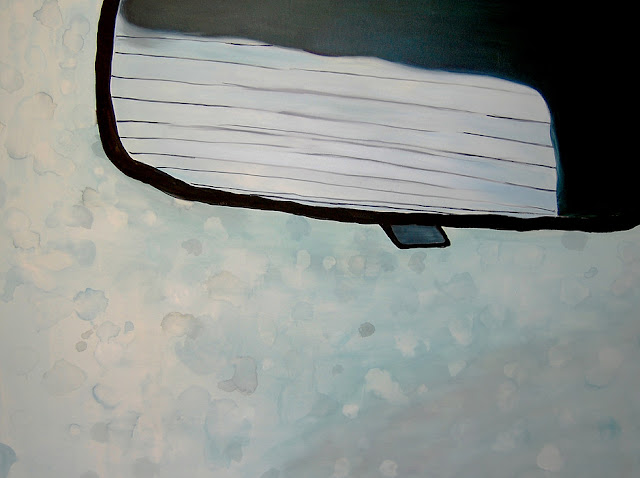 Suddenly, as it seems, a big, centrally placed gallery I haven’t heard of puts on an extensive show, complete with an impressive commissioned mural and lively catalogue, of one of  London’s best young painters. Aglaé Bassens generates brooding atmospherics, alluring painterly effects, awareness of process and art historical references from near-empty content: curtains, sofas and fishless aquaria take centre stage here, the green murk in one of the latter being titled ‘Dear Algae’ in a cute reference to how often people mis-spell her (Franco-Belgian) name.  The painting shown depicts a rain-occluded windscreen and car mirror reflecting the rear window’s heating elements, linking neatly to would-be-empty content of a different order: pictures taken by people looking to sell mirrors online, as selected by American Instagram star Eric Oglander for what they accidentally fracture or reveal. 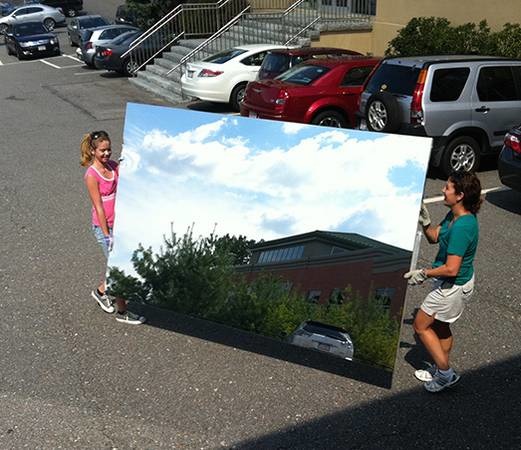 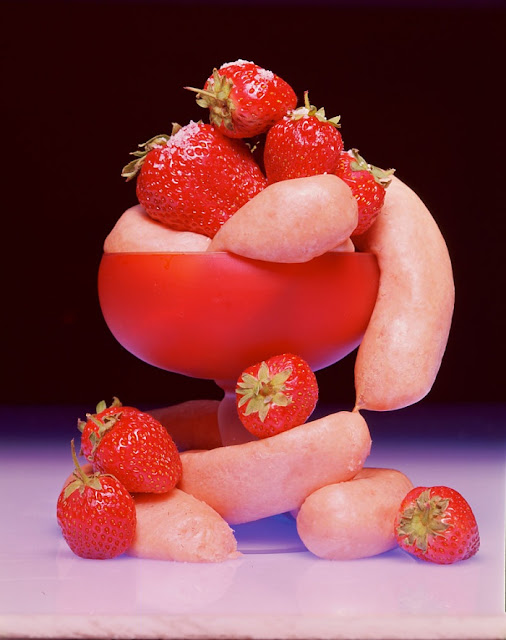 David Parkinson: Untitled, 1970More fine writing (by James Cahill, incorporating quotes from brass kissing to cross dressing from Denton Welch’s weird novel ‘In Youth is Pleasure’) accompanies this hugely enjoyable answer to the question: how many rebellious non-conformists can you fit into one of London’s smaller gallery spaces? The answer turns out to be 20 plus a soundtrack from Jah Wobble, covering the gamut of fashion, advertising, fine art and jewellery, with highlights including Julie Verhoeven’s manic new film Phlegm & Fluff, corn masks by Jonathan Baldock, Helen Chadwick’s self as ruin, and the rediscovery-worthy photographs of David Parkinson (1946-75). 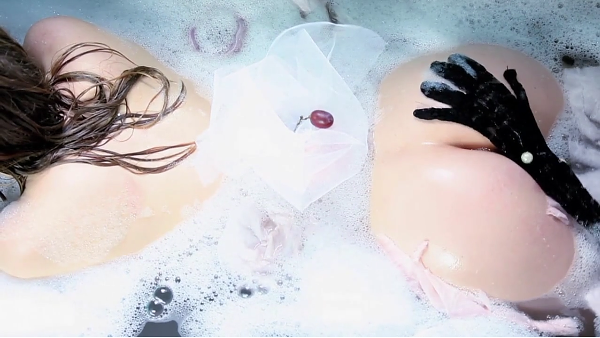 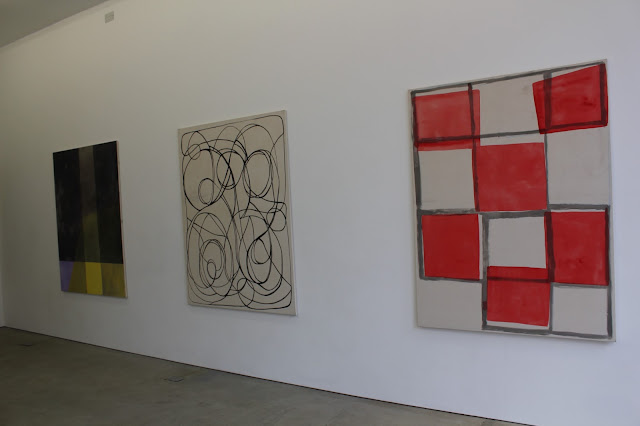 Installation view with Neighbour No. 7 centre

This seems a straightforward show: London-based German Jost Münster riffs on the architectural features of what could be his neighbours’ properties, layering them ambiguously into large acrylics, made liquidly on the floor, then sees how they play out as neighbours to each other.  But there are also small watercolour studies, a ‘Waiting List’ from which you can play the judge of what to develop at scale; and in one case we have a preliminary pencil study as well as a watercolour still on the list even though it’s become New Neighbour 7. And that’s a curveball: from colourful study to just black on raw canvas (and using a new-fangled acrylic pen applicator rather than a brush); and where the others use rectangular geometries, a one-line labyrinth of curl. Not everyone fits straight in to a neighbourhood, but then again perhaps the strangers, potentially, can. 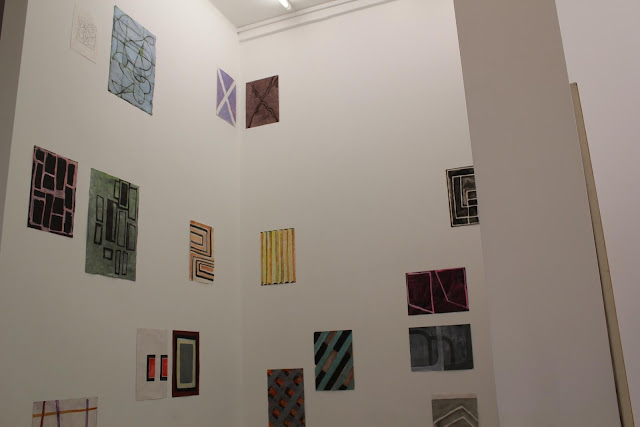 The ‘Waiting List’ with preparatory stages for No 7 top left 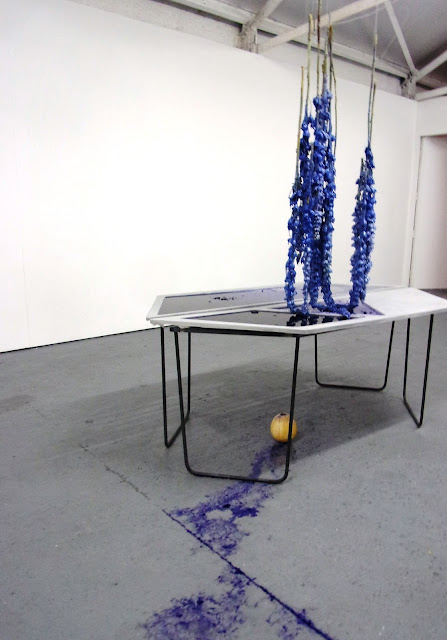 Miriam Austin’s biggest solo presentation to date sees her take over Bosse & Baum’s substantial warehouse space, largely with her signature beautiful – though often poisonous – material of plant forms covered in prosthetic silicone to make somehwta corporeal regalia which looks as if it could be worn in performance (though when Austin performed at the opening, she was in her full body  fish skin).The illustrated elements ofProsthetics for Hostile Contexts become, rather, a sculpture which itself performs, as ice drips into a mesmerising deep blue pool (with delphiniums and red cabbage stained water). Elsewhere, the gorgeous palette of frozen floral fades is offset by serried ranks of  aluminium tools, elegant forms which look as if they could be just the new invention her rituals require – though it’s not at all obvious how to use them. 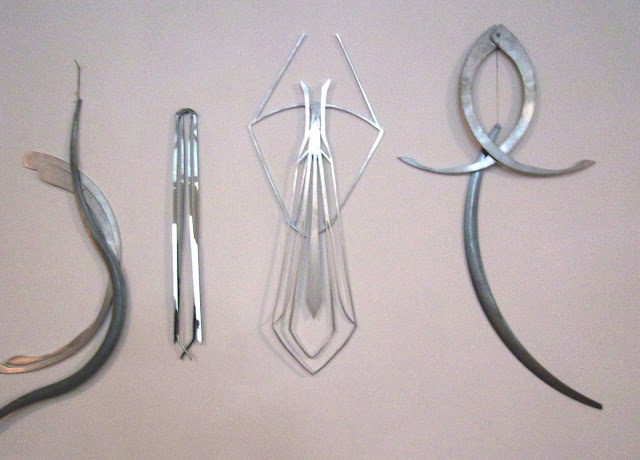 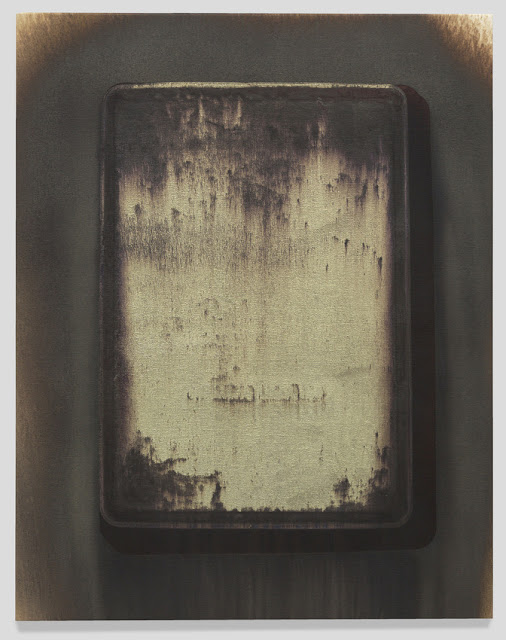 Untitled, To (Sleep), 2015-16 – Silver nitrate and epoxy ink on canvas 91 x 71 cm
Does this show have the substance to justify its rhetoric and scale?  American Michael Joo is onto something in exploring the body as a generator and consumer of energy (hence the integration of calorific values for its actions) combined with the use of silver nitrate to make painting-come-photographic events which go halfway towards reflecting our own actions into the scenario. A monumental marble billboard adds convincing sculptural / architectural language, contrasting the marble’s own painterly effect on the front with a silvered rear at a height which brings in the space but not the viewer, and playing reflected transience off against geological timescale.  Yet add in the eponymous radiohalo, the faultline in New York, Buddhism, and the graphite legs of endangered cranes scratching drawings over the stairs, and I have trouble putting it all together coherently – but it’s impressive enough to be worth puzzling on yourself. 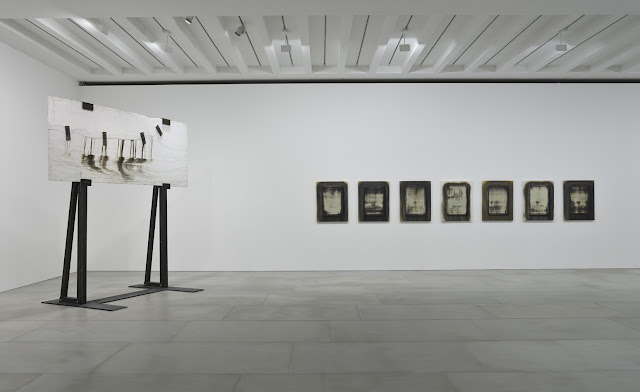 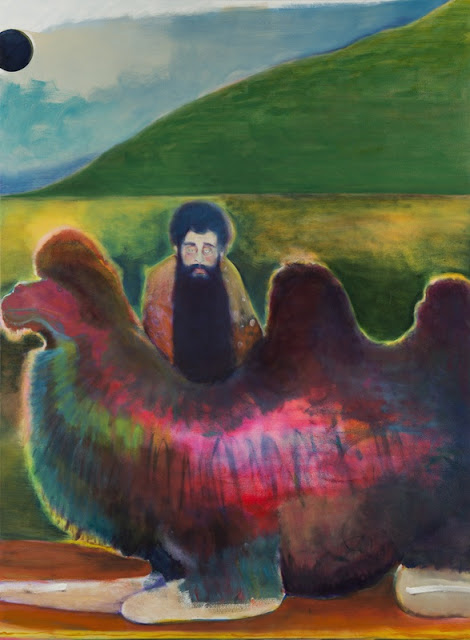 Expedition to the Interior, 2016 – Oil on canvas,210 x 155 cm
Ryan Mosley may be the closest Britain has to Neo Rauch’s way of painting – but where Rauch segues pre-communist and more recent elements into baffling narratives with a faded poster palette, Mosley conjoins the nineteenth century with ours in surreal situations which tend towards the hallucinogenic. Here a range of character portraits combine with more complex compositions  which feature – by way of my illustrated examples – the humps of a fluorescent camel rhyming with a beard under a black sun; and a skeleton atop a cabinet, pipesmoke forming a moon, Afro hairstyles matching another beard on people most of whom who could be just pictures, with a bottom right sector resembling  passage from Thomas Scheibitz. The result is too much enjoyment to fuss about meaning. 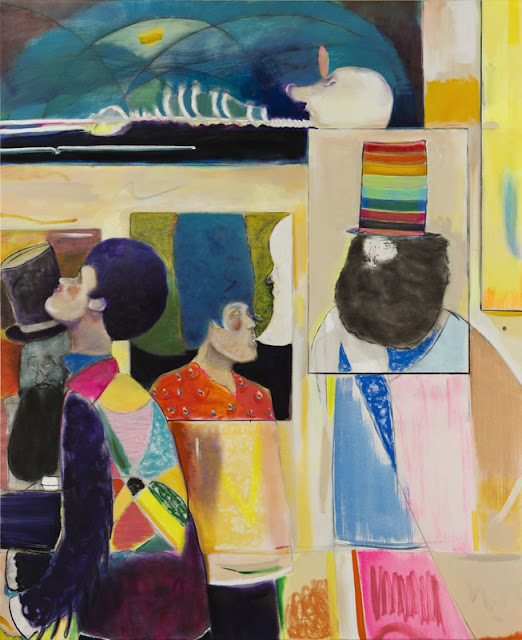 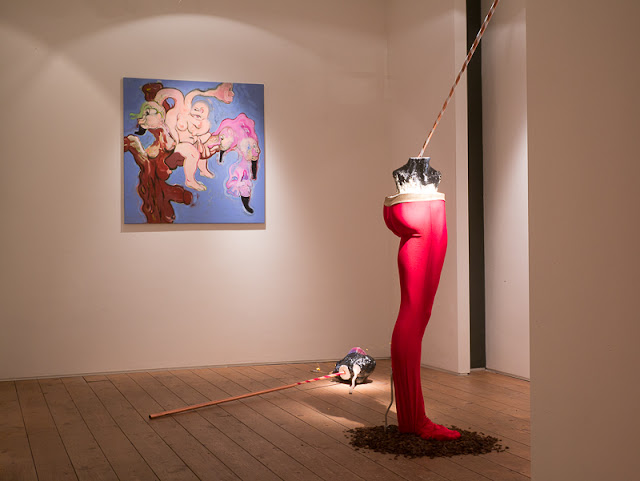 Kate Lyddon has moved from making paintings with various materials collaged on to them to installations which separate the sculpture from the painting. Both elements propose that what may seem ugly could be beautiful and the conventionally beautiful be left as ugly – both in how they look and in the materials they use*. At Cabin, moreover, the paintings (mostly portraits of a sort) are connected to the sculptures (body parts of a sort) by copper tubes and cutlery: we’re reminded of the tubes as plumbing inside the body, standing in for the processes of flow and waste, and the spoons as transporters of sustenance. A circuit is proposed, relating – in a paradoxically feel-good way – to the biggest contrast of all.
*I term her position a form of contrastivism in my essay at
http://www.cabin-gallery.com/kate-lyddon-exhibition-february-march-2016 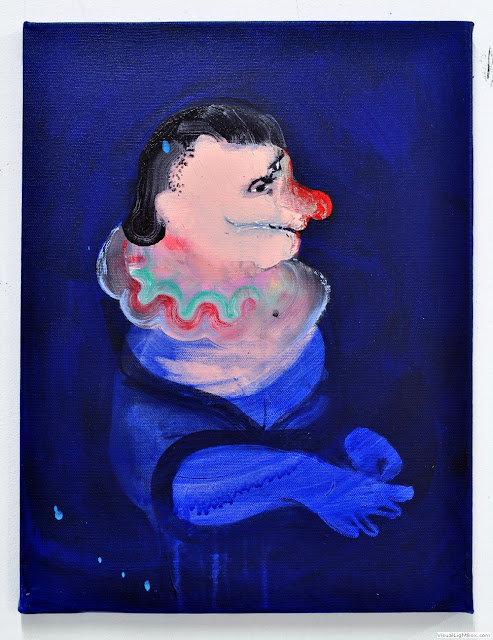 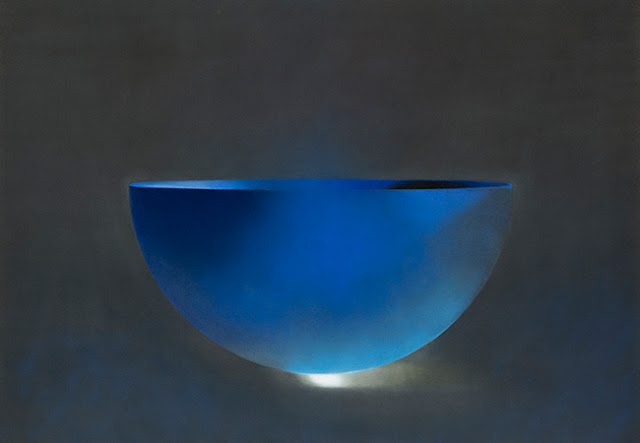 Pastel is faring well this year: hot on the heels of its classical master (Jean-Etienne Liotard at the Royal Academy),  the freshest works in Chantal Joffe’s show at Victoria Miro also uses it. The German-based Japanese artist Kazuo Katase, on the back of a substantial history of conceptual installation, has used it since 2011 to boil down his thinking into an ongoing series of  empty bowls, which act as semi-hemispheres ready to be the halves of a globe in an east-west duality. Despite their uninfected rendering, they gain a zen-tinged standing-yet-floating contemplative presence through eerie lighting and the ectoplasmic mist in some images. If you asked Morandi and Turrell to collaborate in India, you might arrive somewhere like this… 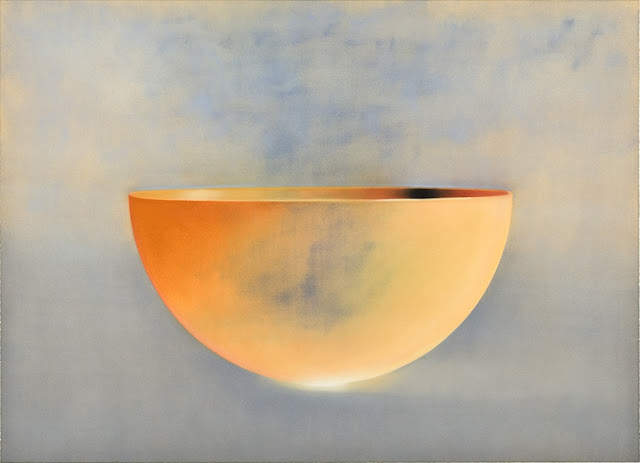 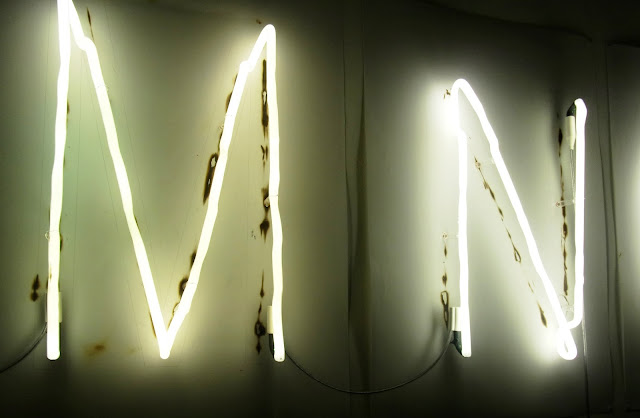 Pretty often I reckon I’ve seen enough neon, but Fiona Banner – though not greatly associated with the medium – uses it freshly as part of what proves to be a concise retrospective in the guise of DRAF’s study programme. Her first, Neon Full Stop (1997), is wittily minimal and maximal at once, a breath encapsulated in glass which prefigures her move to big, shaped full stops – present here as bean bags. Every Word Unmade(2007) is a large and stutteringly clunky white neon alphabet ready to create meaning. It was  checked against the paper templates on which the letters were drawn, causing rather alluring burn marks. Beagle Punctuation (2011) turns punctuation marks into Snoopy. The Vanity Press (2013) is an ISBN number published as a book with that reference under Banner’s own imprint. 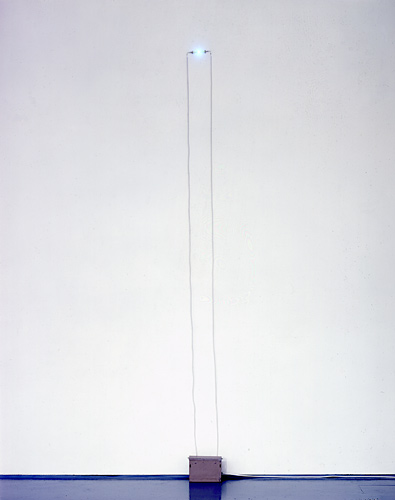 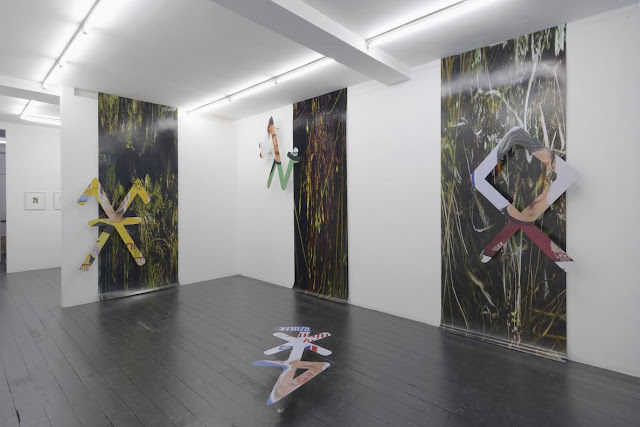 Berlin-based Marie Jeschke goes against gender stereotypes by using blown-up versions of collectible football stickers as the most prominent aspect of her main installation: they are shaped into the  form of familial symbols – dating back to pre-literate times – from Heddensee Island in Northern Germany, still used as signs on houses. That suggests one form of social identity usurping another, and Jeschke makes it personal by mounting the images on her grandfather’s images of the moors nearby, A similar back and forth features in a second room in which she immerses photographs of childhood scenes she says she’s forgotten in tanks of liquids from her current life to activate the past through the distortions of the present. 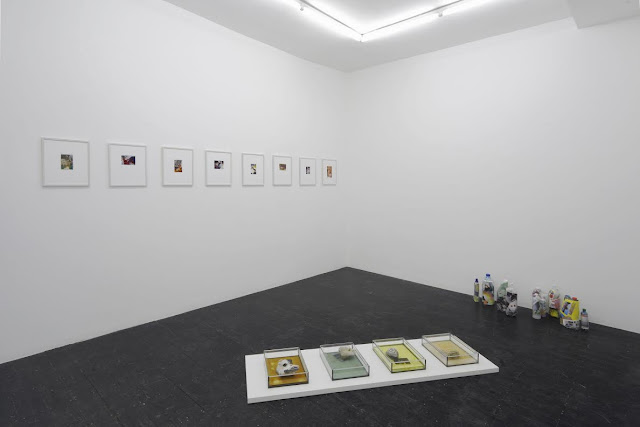 ‘Can’t Remember Always Always’, with photos in liquids at front, bottles of liquids at right, processed photos behind