Up Now in London – Paul Carey-Kent chooses the best of the Autumn season’s start.

The large but little known Guildhall Art Gallery has a significant collection of Victorian paintings, currently complemented by and integrated with over 100 contemporary still lifes. They provide new spins on flora, vanitas, food and domestic objects in a show – organised by Peckham’s MOCA – which toured the world three years before arriving in London. You’ll find, Andro Semeiko’s 1.5m square  “Very big chocolate cake”, a tribute to potential excess, more healthily topped by a 2 m high painting of cherries by Martin Gustavsson; and library of woodland books by Conrad Bakker; a Fright Wig made from household dust by Paul Hazelton; Caroline McCarthy’s image of a skull made from Ben-Day dots punched out of a binbag hung next to it, waste to waste; and two classic Fantin-Latour florals – while both Philip Pirlo and Michael Petry (also the lead curator) make striking works which equate flower and anus.

80 works show John Singer Sargent relaxing into watercolour during 1900-18, largely for his own pleasure and often linked to travel tied into his more lucrative work, with Venice, Southern Europe and the Middle East prominent. The best (which is to say, most) have unexpected subjects or viewpoints allied to a tight structure with contrastingly loose and often surprising application of colour. And there’s magic in, for example, the way he can transmit a sense of hot or cool temperature; depict rocks under water with convincing economy of means; suggest his own movement as he paints from a gondala; or blend figures into the pattern of a landscape.

It’s good to see that James Freeman is up and running again after severe flooding last December, and with a striking display of Claire Partington’s ceramics. They combine the skill you would expect from an ex-V&A technician with a slightly sardonic – and assertively female – take on fairy tales and classical art. Transformation stories are presented via works with swappable heads, ancient figures are infected with modern vices, and a gathering of 30-odd lovers’ eyes from various masterpieces make for an attractive yet disturbing presentation.

Young São Paulo-based painter Lucas Arruda has made quite an impact with his small and systematic oil paintings  which conjure atmospheric – indeed, romantic and panoramic – landscapes from the very verge of abstraction. Turner meets Albers, perhaps, close to monochrome, but with impressive micro-painterly effects, including a lyrical line in scratching. His first London show also includes a room in which very much smaller paintings, made on 81 acetate slides, are projected on a scale far longer than the works on canvas in a 13.30 minute loop. The scale is reversed  yet the effect is comparable. 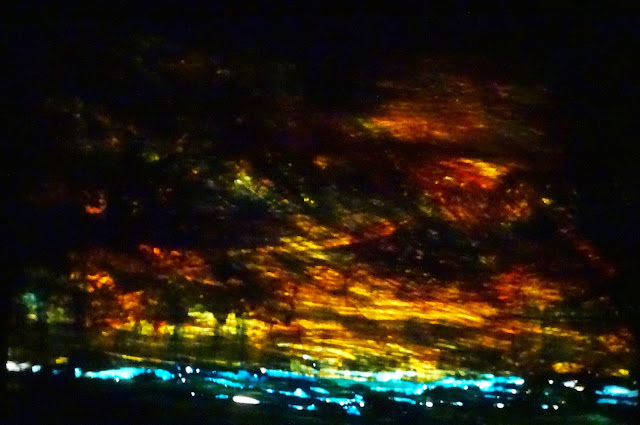 The railway arches near Hackney Central Station look set to act as a useful art resource until more commercial developments take over, and the biennial Sluice fair will use four of them at the end of September.  They are already worth visiting for Paul Cole’s literal exposure of his dirty linen: abstract-tending self portraits of sorts utilise his family’s old bedsheets as low value grounds which  encourage guilt-free spontaneity and enable paint applied on both sides to contribute to the face shown. Some sheets are wall hung, six others take on a more sculptural presence by being draped over pairs of the artist’s old shoes. Moreover, Amy Green’s subtle graphite drawings are well worth a look in the neighbouring Arch.


Had this show been called ‘Deconstructing the Grid’, it might not have seemed a likely summer offering – yet that would equally describe the contents of ‘Playground Structure’, the title actually deriving from a Jeff Wall photograph which makes a climbing frame look like a sculptural grid.  That’s the cue to read the other works as frolickful fun: Daniel Sturgis contributes several eye-popping fizzers, Rachel Howard undermines a wallpaper pattern with psycho colours and what could be smears of blood, Mary Heilmann and Amy Sillman go in soft directions, and the grand cool of Ice Palace is one of two large Jeremy Moons – chosen, perhaps, for what August is meant to be like rather than how it’s actually panning out this year.  If jollity’s not your thing, by the way, head to the Lisson Gallery, where Santiago Serra’s 3-D gridded Impenetrable Structure fills the space with razor wire…

This nifty and impressively sourced curation by Carlos Noronha Feio includes a one-off wallpaper of his own, in which nuclear explosions make the flower pattern too dangerous, I suppose, for reproduction. That sets the tone for a summer flower show with a wild edge. Among the 18 artists, Marte Eknæs’ uses 3D military modelling software to design a rose, Mustafa Hulusi’s brings in the economy and intoxication, Lynn Chadwick and Georgy Litichevsky athropmorphise their flora with a certain sharpness and Harm van den Dorpel gives us thistles. Yet it’s all rather beautiful…

This sparkling conjunction unites six artists of disparate form who share an interest in the nature of urban space and how we engage with it: Tim Head renders corporate spaces uncanny through reflection and tinting; Abigail Reynolds opens windows onto time and cultural history by collaging book illustrations, their scenes  cut through to reveal the same place in an earlier year; Nathan Coley proposes that distressed sculptural housing blocks be used for political protest; Mike Ballard appropriates hoardings and derives paintings from wall textures; Melanie Manchot films parkour traceurs navigating Newcastle; and there’s an arrow-heavy ‘ontological painting’ by Keith Coventry in case none of that tells us where we are…

Flash back to 2013 and star American footballer Aaron Hernandez was arrested for murder on the evidence of the unique wear on the chevrons of his Air Jordan shoes. Ru O’Connell has form with investigating the influence of patterning on life (airplane seat covers, m’ lord, casino carpets and firefighters’ uniforms): his actions, too, have accrued a recognisable profile over time. Here he shows foam impressions of his own trainers, putting himself in the frame as the maker of plaster reliefs cast from their chevron patterns and shaped linen wallworks  printed over with same to constitute a rather soleful self-portrait as a moralist of decoration.