I first encountered the work of Paul Feiler (born Germany 1918 Died Cornwall 2013) at his centenary exhibition held at the Jerwood Gallery in Hastings last Summer. The work was spread out over several rooms in the award-winning seaside building adding light and gravity to the work.

In 1958 Mark Rothko and his wife Mell visited Cornwall, together with Peter Lanyon and Terry Frost they had tea with Feiler

Feiler is an artist who worked right up until his death in 2013. After graduating The Slade in 1946, he was part of a legendary group working in St Ives during the 1950s and 60s, who counted William Scott, Peter Lanyon and Roger Hilton as core members. In 1958 Mark Rothko and his wife Mell visited Cornwall, together with Peter Lanyon and Terry Frost they had tea with Feiler and his wife at their home in Kerris, near Penzance. The event was recorded by Feiler which has forever connected him to the great American Abstractionist. 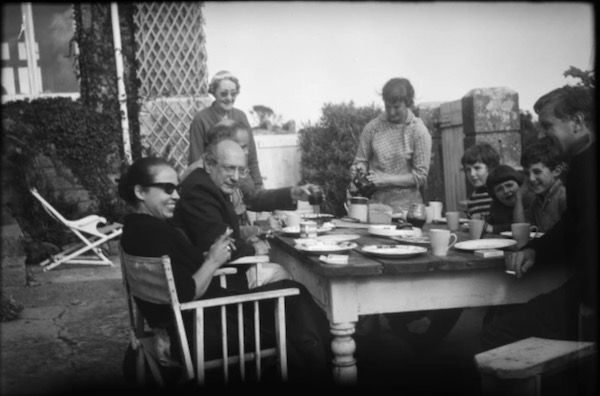 During his lifetime, Feiler was given a retrospective exhibition at Tate St Ives. His work has not been reassessed until recently and with galleries looking at developing the estates of artists who have fallen into relative obscurity, Feiler is rich pickings. For example, I noticed a number of his works for sale at the British Art Fair held at the Saatchi Gallery this year.

The exhibition at the Redfern Gallery works better in many ways than at the Jerwood. The display is more intimate and has a domestic feel which highlights the small to medium size scale of the work. Feiler has a decorativeness to his style of painting which feels distinctly midcentury modern. It shares a lot in common with Troika Pottery, which must have been partly inspired by the artist. This is an easy exhibition to take in and enjoy. The soft white tones of many of the better paintings are landscape inspired and have a distinctly naturalistic seaside feel.

Elusive Space is a Centenary Retrospective featuring works spanning varying stages of Feiler’s career. Many of the paintings were inspired by the cliffs and inlets of the coast of south-west Cornwall. A number of the earlier pieces seek to evoke the sensation of the landscape – of rain sweeping in from the west, the sea pounding the cliffs, the grey granite of harbour walls and houses, and the rapidly changing light. Pivotal works include Grey Receding (1964-65), Evening Harbour, Low Tide (1953) and Scathe, Brown (1963). Feiler has been showing with the Redfern Gallery in London since 1953, his first solo show sold-out.

Feiler is not really a leading artist in relation to the St Ives Group. He is however, a good solid abstract painter with a provenance but falls down by not exploring the scale and depth needed to push boundaries in this area of painting. He is most successful in his larger works using a white, bright monochromatic palette and there are several examples of this on show at the Redfern. There are many artists currently in the process of reassessment in the UK. Feiler is one of these artists, one to watch.

Paul Feiler was born in Germany emigrating to the UK just before WWII age 17. He was interred first in the Isle of Man then in Canada because of his heritage. After the war, he returned to the UK and was a highly respected educator at the West of England College of Art in Bristol, wherein 1960 he became Head of Painting. In 1953, with the proceeds of his first sell-out exhibition at The Redfern Gallery, Feiler bought a disused chapel near Penzance which he converted into a home. In 1973 he and his family moved permanently to Cornwall and, a year later, he took over his friend Bryan Wynter’s studio at Paul (originally used by Stanhope Forbes). During this time Feiler forged close friendships with many of the leading St Ives artists.