Gauguin once reportedly exclaimed of self-taught artist Henri Rousseau’s self-portrait, “There is the truth and future! There is painting!”

“There is the truth and future! There is painting!” – Gauguin

The truth demonstrated by Rousseau resonates strongly with new artist Paul Lock who first picked up the paintbrush six years ago, and this week opened his debut exhibition ‘You Simply Are’ at the Noho Showrooms in Fitzrovia. 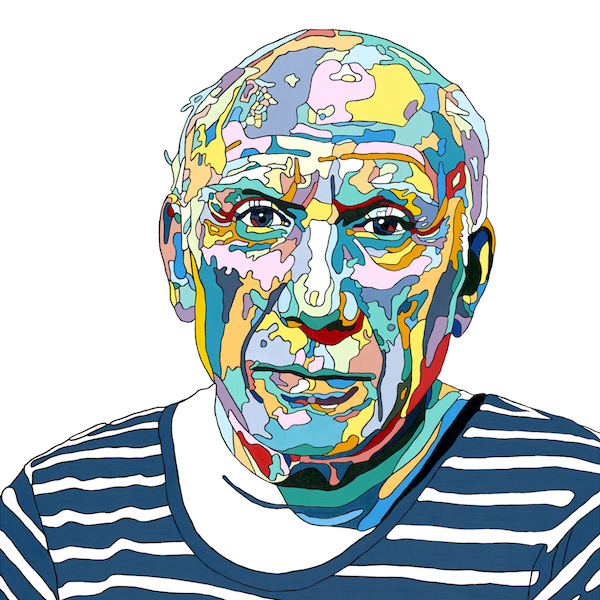 Although a recent starter to the artistic scene Lock has a unique approach to portraiture, using face-mapping painting techniques to create highly stylised artworks. Francis Bacon meets Frank Auerbach but with the iconic immediacy of pop artist Roy Lichtenstein.
Lock says of his work, “I continually strive to harmonise the freedom of colour and mark making with creating an engaging image. What seem to be mistakes underpin something new and fresh that becomes part of the painting.”
Lock’s implicit understanding that mistakes are just part of the artistic process results in original and single-minded paintings. His subject matter a roster of 20th-century legends; from Pablo Picasso, Audrey Hepburn and Muhammad Ali; to Ziggy Stardust, Jimi Hendrix and George Michael – all gazing directly back from the canvas as if still strutting their stuff.

To be a self-taught artist requires determination and grit, to withstand any feelings of insecurity or vulnerability due to a lack of formal art training. Of course on the flip side, it gives the artist the opportunity to work free of rules and ignore the potentially stifling need to conform. In Paul Lock’s case, without the influence and direction of a tutor or art school background, he has literally forced himself to learn to paint.
And although undoubtedly a somewhat torturous experience, requiring equal measures of patience and perseverance, Lock’s body of work is both beautifully bold and brilliantly brave. In art critic Estelle Lovatt’s words, “Paul is a striking artist engaging a balance between mark making, colour and line.” His artistic process demonstrating a rollercoaster of excitement, frustration and elation.

The artistic journey illustrated in Lock’s painting harks back to Rousseau’s own extraordinary metamorphosis as a painter, who at the turn of the 20th century was championed by artists including Picasso. A century later Paul Lock’s uncompromising portraits of modern day icons prove that the medium of painting is still very much alive and ever evolving.