Paula Rego (b 1935) is an artist who is vividly expressive and imaginative in her use of colour deployed in the service of brilliantly choreographed compositions. This gift is as evident in her early paintings and collages as in later years, her huge pastels on paper backed by aluminium. Her outstanding visual talent is deployed in the service of ambiguous yet persuasive and often subversive and subtle visual narrative.

This large exhibition gives an exemplary insight to her art: beguiling, captivating, always of interest.

This large exhibition (11 galleries) – she is a remarkably prolific artist with a museum dedicated to her work in Cascais, in her native Portugal – gives an exemplary insight to her art: beguiling, captivating, always of interest. She is adept with various techniques and materials, which she varies to her vision. It may be pastel and oil paint, used for paintings as well as collage, drawing on paper, etchings. Every part of the surface comes into play. 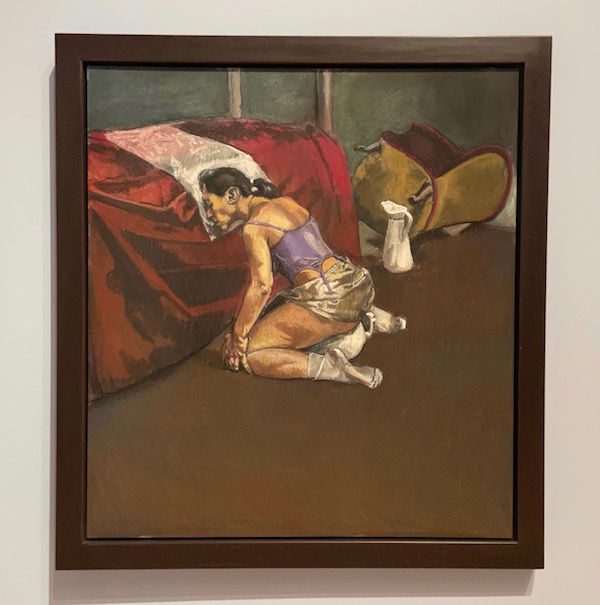 She is mischievous yet also convincing when marshalling her own sense of scale; here and there, tiny creatures are observed in the domestic detritus which characterises many paintings. The vignettes seem almost breathed onto the surface in a quick outline – one with a sewing machine, one with a musical instrument. Somehow all this indicates life and activity going on at all sorts of levels, just as it is hardly visible in our own lives: until we notice a bit of movement, say, as when a gust of air catches a web. Out of the corner of our eye, we glimpse movement: insect life in the garden, for example, on sidewalks in the street and so on. We improbably hear – when looking at a painting, a drawing, a print – a flurry of wings, a bird call from a tree. Somehow Rego catches in static paint, pastel, ink and wash, on canvas and paper, that sense of life from all sorts of creatures on all sorts of levels. It is very rare to feel when you visit an exhibition that it has been a social event with the images on the wall, but so it seems. We bring our stories to Paula Rego’s stories: these are conversations.

What is wonderful about both exhibition and book is the sense of amplitude, of generosity, of opening out. What is terrifying is the subject matter: we are lulled by the brilliance of the compositions which seduce and beguile, but the subject matter – the persecution, physical and psychological, of women, is a litany of horror. This is intensified by the fact that these are cultural phenomena, not ignited by – say – the ghastliness of war or the tyranny of poverty. And it is, so to speak, unisex as well, even more horrible. Women do unto women, in say the infliction of female genital mutilation, and of course in the complex situations engendered by illegal abortions, often so seemingly desperately needed, for societal reasons, by the patient victim. The female perpetrators are as trapped by their cultures as their subjects. 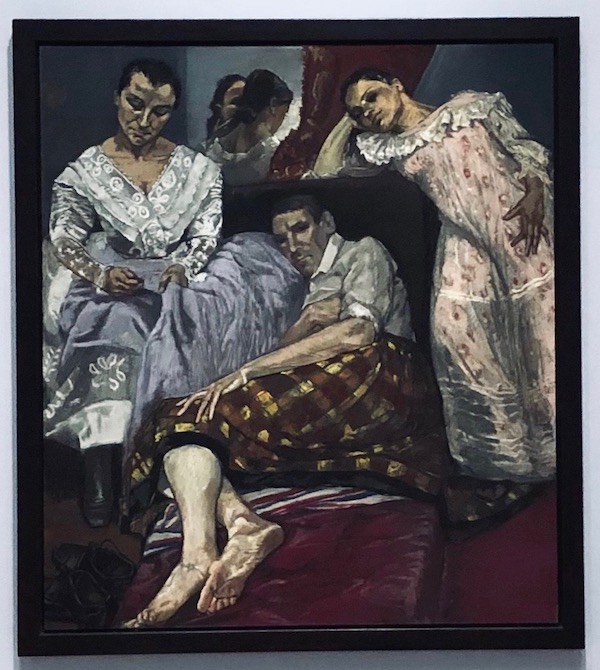 The descriptions of the stylised essential stories shown in Rego’s imagery, almost all of which is concerned with women, in so many guises, are in ironic contradiction to the art itself, which is resplendent and curiously celebratory. Her work says here it is, women as sensual and passionate creatures, trapped yet protesting, victims at times yet vibrantly alive. In reaction perhaps to the repressive society in which Rego spent her childhood, her early elaborate explorations of the dilemmas of life had as characters hybrid creatures part animal part human. They are neither cuddlesome nor winsome: Red Monkey is aggressive, seemingly without cause; in several encounters between a large overgrown girl and a large black dog, a miasma of relatively mild menace envelopes the paintings. In The Raft, a large woman propels a platform of laced together logs, her passenger another woman, and strange creatures inhabit the water or accompany the voyagers: a bear in a sailing dinghy, for example, while tiny turtles, a dragon and a glowering fox are among the crowd.

Paintings become larger, sometimes with fewer characters. Yet, the stories, parodies – at times affectionate, or mysterious, or threatening – of the domestic makes the viewer feel things are familiar until we realise they are nothing but. About seven large pastels of women portrayed life-size, from the 1990s suggest a range of specifically female dilemmas: the passive bride, the woman in pain post-abortion, defenceless against threat.
Another sequence from the 1990s illustrates Peter Pan as we have never seen it, not to mention a series on nursery rhymes, all reminding us that we need to look far beyond face value of these stories, their edges blunted by familiarity. This is part of Rego’s gift, to strip away the blandness that overlays that which is misleadingly well known, to show that we don’t know at all what we take so lazily take for granted. None of this is done in a sensational way, which makes it all the more powerful; we recognise say Hey Diddle Diddle and then realise we don’t know it at all, and Miss Muffet is right to be surprised into fear by the spider. And as for Snow White, and that cast of characters…. A section called Coercion and Defiance shows us the single portraits of young women curled into foetal positions. Another young woman in a maroon gown is seen in a series of strangely athletic poses, having flung herself onto a couch, which is evidently the same couch that Rego occupied during the course of her Jungian analysis.

As Rego, herself tells us, “Painting is practical, but it’s magical as well. Being in the studio is like being inside my own theatre.” Her last sequence is entitled the Theatre of Life, ambiguous stories and casts of characters deployed in vast landscapes and strange interiors.

This terrific exhibition is indeed a show, and the audience is amused, gratified, illuminated and enlightened all at once by the journey on which Rego takes us.