The artwork of Paula Rego, whose career spans an impressive half-century, has been largely informed by her childhood in Portugal, the tension of her conservative upbringing with the looser morals of her London experience at the Slade school of art, and her relationship with her parents.

The smaller size(s) ….provided a more intimate look into the fragile subject matter.

The exhibition at Victoria Miro includes some of her lesser-known work, particularly certain smaller, more intimate pieces with a different tone than her usual more significant works. I was surprised by the variety of sizes and mediums she took on. A combination of ink, wax crayon, charcoal, watercolour, and huge pastel drawings created a fascinating body of work from one of the past few decades’ most intriguing female artists.

Paula Rego was born in Portugal during a time when freedom of speech was extremely limited and women, mainly those in the upper classes, were encouraged to remain inactive and passive. She had a fraught relationship with her mother, also a talented painter, something which is evidenced in much of her work. Although her father was a closer parental figure, he suffered from depression throughout his life. It was ultimately he who sent his daughter to the Slade School in London where she began her career and met her future husband, artist Victor Willing. Rego’s work draws closely upon her own life experience as well as her unconscious experiences to create sometimes outlandish images which express the tension and complexity of human emotions.

The high ceilings and brick columns of the downstairs portion of the converted warehouse space at Victoria Miro’s Wharf Road gallery could have provided a distraction to less strong works. However, the setting seemed to complement the boldness of Rego’s huge pastel triptych and the roughness of her smaller scale watercolour, graphite and wax crayon drawings. 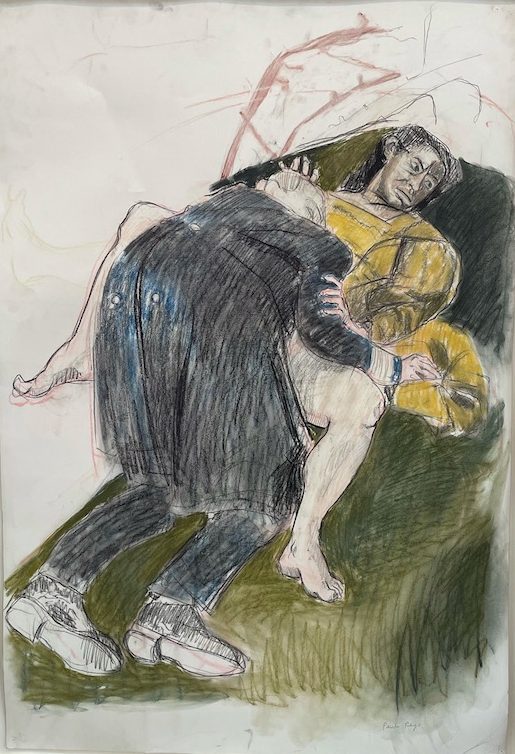 I was particularly struck by these smaller works, although they were in stark contrast to the bolder triptych. The energetic mark-making and darkness of the drawings drew me in. The depiction of the seemingly unbothered female figure in the face of ambiguous suffering, whether that be of the man on the chair, the woman on the floor, or the dog mounting the woman, seemed to me to epitomise the form of detachment evident in certain Rego works on the part of female figures, lending an ambiguity to otherwise disturbing scenes. In Girl on a Large Armchair, a girl looks out vacantly, ignoring the scene at her feet, where a dog mounts a smaller female figure. The dog is a recurring image in her work, often symbolising her late husband in his later, illness-ridden years or to express her feelings of grief and devotion towards him after his death in her Dog Woman series.

In the same ground floor space, one cannot ignore the central drawing, La Marafona. This work is an ode to the weight of her father’s battle with depression. The larger than life, sad, puppet-like figure seems to bear the weight of the world, and this is evidenced by his crown of thorns, indicating his martyrdom. Although he is grotesque, we sense the extreme tenderness with which the female figure, who I assume is Rego herself, leans her head on the shoulder of her father in his quite literal worst form. Having experienced depression herself throughout her life, Rego must have been particularly sensitive to her father’s experience. In her series, Depression, also shown in this exhibition, we see rarely shown works encapsulating her experience with depression. Rego kept these works hidden for a long time, ashamed of how depressed she was, although she saw the act of creating an image as therapeutic during that time.

Rego sees picture-making as a way of allowing yourself to feel things forbidden in everyday life and to understand certain emotions that might be too complex to put into words. An image to her is like a fantasy world where nothing is off-limits; violent impulses, sexual urges and hatred and love combine to create a fantastically ambiguous world.

The exhibition continues into another building, then up several steep flights of stairs. I felt as though I was ascending some stairway to heaven to see the rest of her work. Upon entering the new space, I was surprised to find yet more small scale works than I had anticipated. However, the smaller size of a series like Misericordia, which brought to mind Hogarth’s Marriage a la Mode, provided a more intimate look into the fragile subject matter. The long battle with MS of her late husband was the topic of much of her later work. In Misericordia, she shows the brutal reality of the carer/cared for relationship and the unflattering reality of ageing and brutal illness. It is unflinching and uncompromising in its detail, particularly as we have to lean in close due to the size of the work. It is as if Rego is gently beckoning us to have a closer look, and while shocking, there is a tenderness to the drawings which does not go unnoticed.

In Misericordia I, a prominent figure tenderly places an arm over the decrepit figure on the toilet. I was particularly touched by Misericordia V, where an elderly person is shown being spoon-fed in bed and on the right of the drawing being guided away, almost as if being taken to some better place by a guardian angel.

On the same floor, the larger works were intriguingly more subdued in terms of background information compared to the expected Rego busy background, such as in the pastel work Reading the Divine Comedy by Dante. In Flayed, which seems the most explicitly violent of the show, along with Rape, we see the horrific scene of a man crouching over a woman, skinning her back, and the light grey empty surroundings mean we have no choice but to focus on the scene unfolding. The putting into images of an intense emotional experience is clear in these drawings, though the force of emotion combined with a certain detachment is still present. For example, in Rape, although the title makes the subject matter explicit, the woman has an almost bored expression. She seems to be half-heartedly pushing off the male figure whose pose is almost more reminiscent of a child cuddling up to its mother than a violent aggressor. Again, we see the strange tension between tenderness and violence which marks Rego’s work.

The final series I looked at before leaving was the self-portraits. Self-Portrait III reminded me of an Otto Dix painting depicting soldiers returning from war. I wondered if this was a musing on the condition of aging as a woman, or a commentary on her own life experience. Or, as is the case for many Rego works, maybe simply an expression of some long-repressed or forgotten memory from childhood, perhaps of her mother knitting for soldiers returned from the war in her infancy.

It is difficult not to know Paula Rego’s work after the highly acclaimed exhibition at Tate Britain. This exhibition is an excellent opportunity to see a museum-quality show and to discover a more intimate body of work.