I had the privilege to share this incredible Art journey with Michal Cole. An Art journey that had brought us from one Biennale to the next. It started 2 years ago at the 2015 Venice Biennale, when I got involved in Michal’s MuteUlulation exhibition.

Although very different in their practice, background and personal journeys, the two feminist artists share a common ground

As a British-Israeli female artist, Michal always talks about identity. The gender and the race issues have always been at the centre of her practice, be it in photography, video, painting, performance, installation or sculpture.

We had these endless conversations on Art, culture, gender, race and politics. What does it means to be a feminist artist in the 21st century? What is the relevance of universality principles? How to transcend differences through Art? How can Art unite rather than divide? … Ironically, we did not know at that time how these simple and somehow naïve questions will become so relevant in a post Brexit and Trump area.

Michal’s parents were originally Moroccan Jews who arrived in Israel as refugees. Their exodus has been part of the family trauma and Michal had never visited Morocco before we went together. As a matter of fact, I had been going there several times per year for the past 15 years. I kept telling Michal to come with me and visit the country where her family originated. She finally did. In March 2015, we flew to Essaouira, not just to enjoy the beauty of the city but to work as well on her first Venice Biennale project: Ululation. It was a deeply moving and intense experience. Michal reconnected with a culture that was somewhere in her subconscious, in her family memory: the food of Aicha, the colours and the odours of the Medina, the warmth of the people, the overall sensuality  …  She filmed the lips, the tongues – not the faces – of Moroccan women from sixteen to eighty years old ululating. We had tears in our eyes when one of the older ladies, she might have been 80 years old, removed her denture to play a pure sound of joy !

She presented the end result in Venice during the 2015 Biennale. MuteUlulation is a mesmerizing video installation where the strident sound of women ululating and the hundred videos of their lips, mouths and tongues create an overwhelming, intriguing, powerful and emotional impact on the viewer. Thus the Pavilion of Humanity was born. Many visited the Pavilion of Humanity in 2015 and I wish Ululation would one day be presented in the Museum or gallery space it deserves.

In the meantime, we continued our art conversations and Michal opened a new chapter of her art journey, getting ready for Venice Biennale 2017. 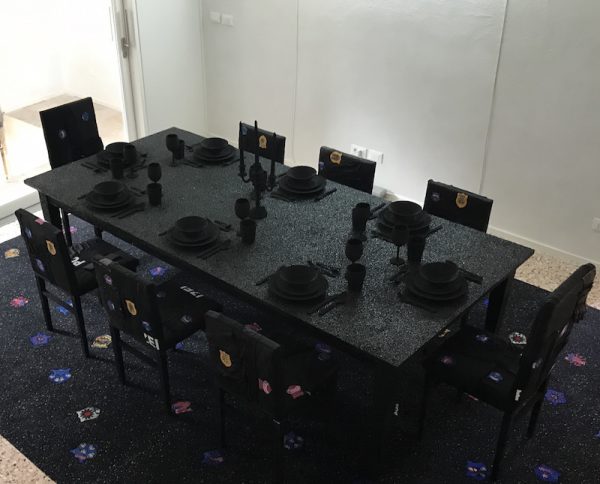 During my numerous visits to Istanbul in 2015, I met Ekin Onat, a Turkish Muslim artist based in Istanbul at that time – since Ekin has moved to Berlin – she addresses female and political issues of contemporary Turkey.

I felt there was a possible match between the two artists and I introduced them to each other in my home in London during Frieze 2015.

Michal and Ekin decided to embark on a common project, a cross-cultural conversation to be staged during the Venice Biennale 2017: Objection.

Although very different in their practice, background and personal journeys, the two feminist artists share a common ground: the home. The concept of the Home is not only universal but very contemporary: various artists have investigated it. What they each bring to the art discourse on the “home” is their personal, different yet complementary, artistic interpretation.

The Pavilion of Humanity, where Objection is being exhibited, is located in a Venetian home right by the Academia bridge on the Gran Canal. Both Michal and Ekin have occupied all the rooms with their own individual and common installations.

“Top Gun” is one of the highlights of Objection. It is a room entirely done up in men’s ties (25,000 ties to be exact) including ties from celebrities even from Donald Trump! Michal had been collecting men’s ties for years – as a trophy? or because she knew that one day she will use them in an art installation? who knows? Over the months, I visited her studio in London which became a hive of activity where she and her assistants were like bees working on ties instead of honey. Ties are such a symbol of male posture and power. Using them to cover walls, floors, books, tables, fireplace… every single object becomes a playful twist on masculinity.

A few weeks ago, when we were talking in Michal’s studio in London, I asked her what she was expecting from the Venice Biennale, from Objection, from Top Gun, from these months of sleepless nights, anguish, stress,… she replied “ I want to show the Art World what I’m capable of and the Venice Biennale is the best place on earth to do so.”

With Objection, she definitely has shown what she is capable of. Bravo!

On the 9th and the 11th of May, Michal Cole and Ekin Onat opened OBJECTION an exhibition curated by Gillian Fox in Venice until the 26th November 2017 at the Pavilion of Humanity Campiello San Vidal, San Marco, 2887 Venice – (Right by Academia bridge). Open to the public until November.