Angiosperms (roughly flowering plants) produce an incredible variety of seeds that are dispersed in creative, innovative ways, sometimes involving tricksy relationships with particular animals. They are borne on wind or water. Some plants grow pods that explode and shoot out seeds like lupins, gorse and broom. The mathematics of coiling and popping are beautiful to an obsessive plant lover and artist like me. As a child holidaying on the dunes of Bournemouth, I held the hot ripe pods of the shrubs felt their satisfying explosions. And thistledown on the wind is a beautiful fibrous display. The aesthetics of distribution attracts humans even when they are not the animal target of the plant mechanism for dispersal, giving those plants which attract the attention of the most controlling animal on the planet an extra advantage.

It’s an impressive and creative visual interpretation of micro-science, using scale to enhance perception of biology

Artist Perdita Sinclair has a long-term fascination with seeds and relationship with Wakehurst. This is her second venture in conjunction with the MSB which collects and stores seeds and fruits from all over the world. In 2016 her exhibition with morphologist Dr Wolfgang Stuppy explored waterborne seeds. Interested by the mangrove trees which drop looking glass seeds which are propelled along the water by a sail, she commissioned a glassblower to make 86 transparent pods which would appear to be made out of the water, the medium that carries them along to ensure their dispersal for germination.

Her piece ‘Flightpath’ for Secret Structures responds to the orchid seed. The smallest seeds in the world, orchid seeds do not have an endosperm to give them the energy to grow, so in order to survive, they need the intervention of a fungal spore. A germinating orchid seed must, during dispersal, land on or be landed on by a fungal spire. It is a wonder that they germinate at all. In response, Sinclair has developed a light installation called ‘Flightpath’ to signify their journey. In the darkened gallery it alternates, like garish Christmas tree lights. 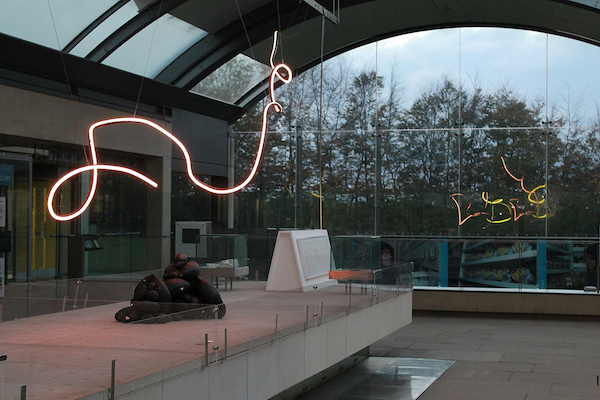 Perdita Sinclair has a long-term fascination with seeds

The process to achieve these neon trajectories was complex. Perhaps unselfconsciously echoing Duchamp (although it was the practical thing to do in this case rather than a self-directed whim) Sinclair repeatedly dropped decommissioned slipper orchid seeds a distance of 12cm, observing and filming their trajectory. She scaled up the drawings and in collaboration with metalworker Mike Penworlf created 4m metal structures to attach the LEDs. Because of the colour potential of LEDs, she could achieve a high level of colour accuracy to move through five colours of slipper orchids. Once lit, the structures took on the appearance of neon, a deliberate choice as she wanted it to chime with the attractions of the human city.

Early biology lessons and teaching me photosynthesis have taught me to associate plants with light, of life with light. Yet fungi do not need light themselves, being unable to make energy this way, lacking chlorophyll. I feel this connection is being suggested by Sinclair’s piece, if only unconsciously. Perhaps because this is a project about survival, growth, and life, it is unavoidable to think of the crucial aspects of metabolism, and it is part of the overall intent of the exhibition. It is the mission of the MSB, to conserve 25% of the world’s plant species by 2020. Although fungi are not included in general analysis of the content of the plant kingdom, and I am not certain how far the preservation and conservation aims of the MSB consists of the eukaryotic organisms, their relationship with plants is exceptionally close. I now know that slipper orchid seeds cannot germinate without a fungal spore.

It’s an impressive and creative visual interpretation of micro-science, using scale to enhance perception of biology. The analogies drawn through art between human and plant kingdoms adds value to those visiting the MSB looking for the experiences we increasingly are encouraged to associate with educational visits. Sinclair wanted to make something monumental in response to this airborne seed and its incredible journey, and it is memorable. Funded by Kew, this is money spent on art in the interests of science.
Also in the exhibition is a micro-scanning table to allow visitors to witness the inner world of various plants, nuts and wood, exploring the hidden structures and explaining invisible plant narratives.

Perdita Sinclair’s other projects on hidden events and processes have taken her to liaise with other scientific projects. In residence with Julian Baker of Functional Fascia, she painted the colours and forms of the inside of the human body as it was being dissected. Recently she has been on residency with Sail Britain, taking a boat from Ipswich to London, up the Thames estuary, trawling for microplastics. She is currently making work inspired by this experience.

I ask her if there are other seeds that particularly fascinate her. She loves the Coco de Mer, or sea coconut. It’s a monotypic genus of the palm family. The catkin of male flowers produces pollen over a ten year period and is one of the longest living inflorescences known. And the fruit is 40-50 cm in diameter, containing the largest seed in the plant kingdom. Also known as the love nut, the seed looks like, she says, ‘a beautiful female bum plus genitalia’. She has done many casts of these. She finds many seeds aesthetically appealing with compelling seed dispersal stories. I can readily appreciate her enthusiasm.

With the increase in information, many more artists may be fascinated by the hidden narratives of science. Art has a role to play in expanding these for our viewing. And its visualising and acting-outs of mechanistic and chemical tales can contribute to our collective research.